Mack Shwert turned a quick trip to Tampa into the best side job ever.

Shwert, who services and installs heating and cooling systems in eastern Massachusetts, recently took home the title of the country’s best HVAC technician, as well as a check for $40,000, in the inaugural ServiceTitan HVAC National Championship.

The HVAC National Championship’s semifinal and final rounds, in which professionals and apprentices were judged on workmanship, proper tool usage, and safety as they put together complete forced-air HVAC systems, can be seen on the CBS Sports Network at 8 p.m. Eastern time on Friday, December 16.

Shwert entered the contest on a lark last summer as he and a buddy in the trade tried to outdo each other in a timed online HVAC quiz. After making it through the first two rounds — the quiz and a brazing challenge — Shwert was invited to the final rounds in Florida.

In early November, Shwert found himself vying against 14 other HVAC professionals under high-pressure conditions: judges, television cameras, a timer, and a live audience at the Tampa Convention Center.

“That day went by so fast,” Shwert said recently. “Next thing I know, I’m holding a trophy and a check, and I just couldn’t believe it.”

He hadn’t told his employers at HomeServe USA about the contest. Now, of course, they know.

Stress? ‘I can just zone out’

Shwert, of Marlborough, Massachusetts, said his everyday job had prepared him for the intensity of the contest — the judges, the lights, the crowd. He puts in a lot of hours, works quickly, and sets distractions aside on a regular basis, he said.

“I’m that dude that’s in the trenches diggin’ holes every day,” he said. “I’ve been under a time crunch forever. I have no issues with the homeowner being with me, pulling up a chair. ... In a crowd there, I can just zone out and do my own thing.”

Shwert has been in HVAC for about 10 years and has also worked as a plumber and, before that, a longshoreman (in Tampa, coincidentally). His father, a carpenter, had encouraged him to go into the trades.

He didn’t even want to go to Tampa after learning that the contest would be recorded for television, but his wife, Ashley, insisted on the all-expenses-paid mini-vacation.

He had some serious competition there, including second-place finisher Lee Morris Jr. of Charleston, South Carolina, who has nearly 30 years in HVAC; and refrigeration company owner Ricky Curtis Jr. of Duncan, Oklahoma, who placed third. In the apprentice contest, Hunter Lee was first, Scott Kiggins second, and Patrick Boldt third. All winners received cash prizes. 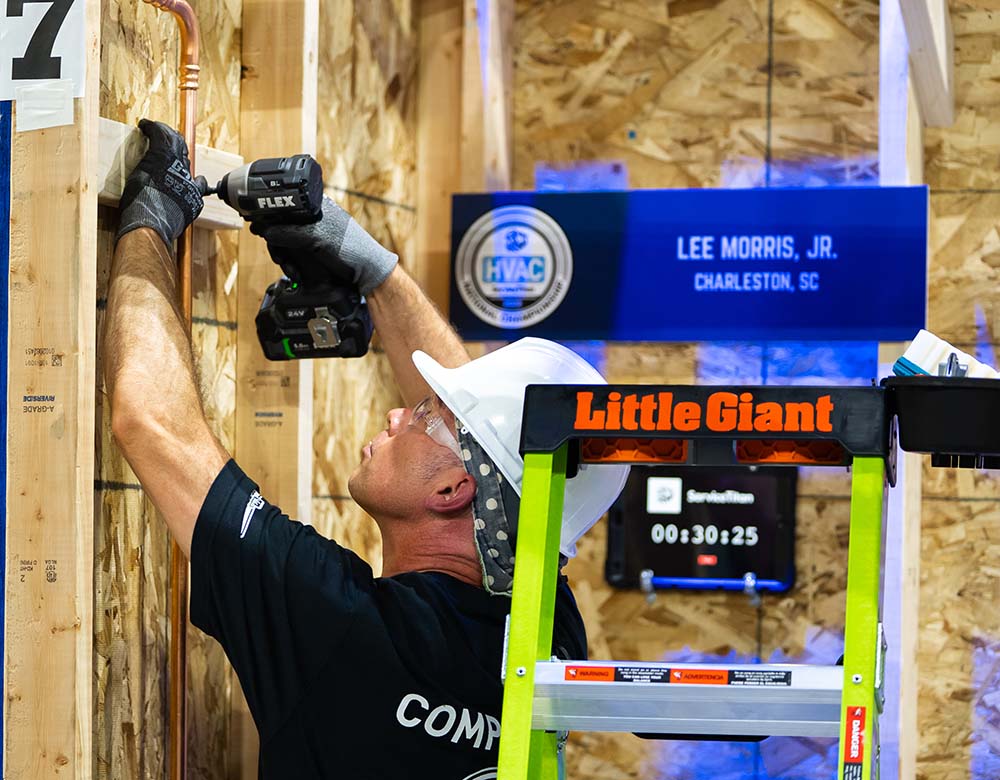 UNDER PRESSURE: Lee Morris Jr. works to secure a copper line during the final round of the HVAC National Championship. Morris, of Charleston, South Carolina, placed second in the contest’s professional division. (Courtesy of Intersport) 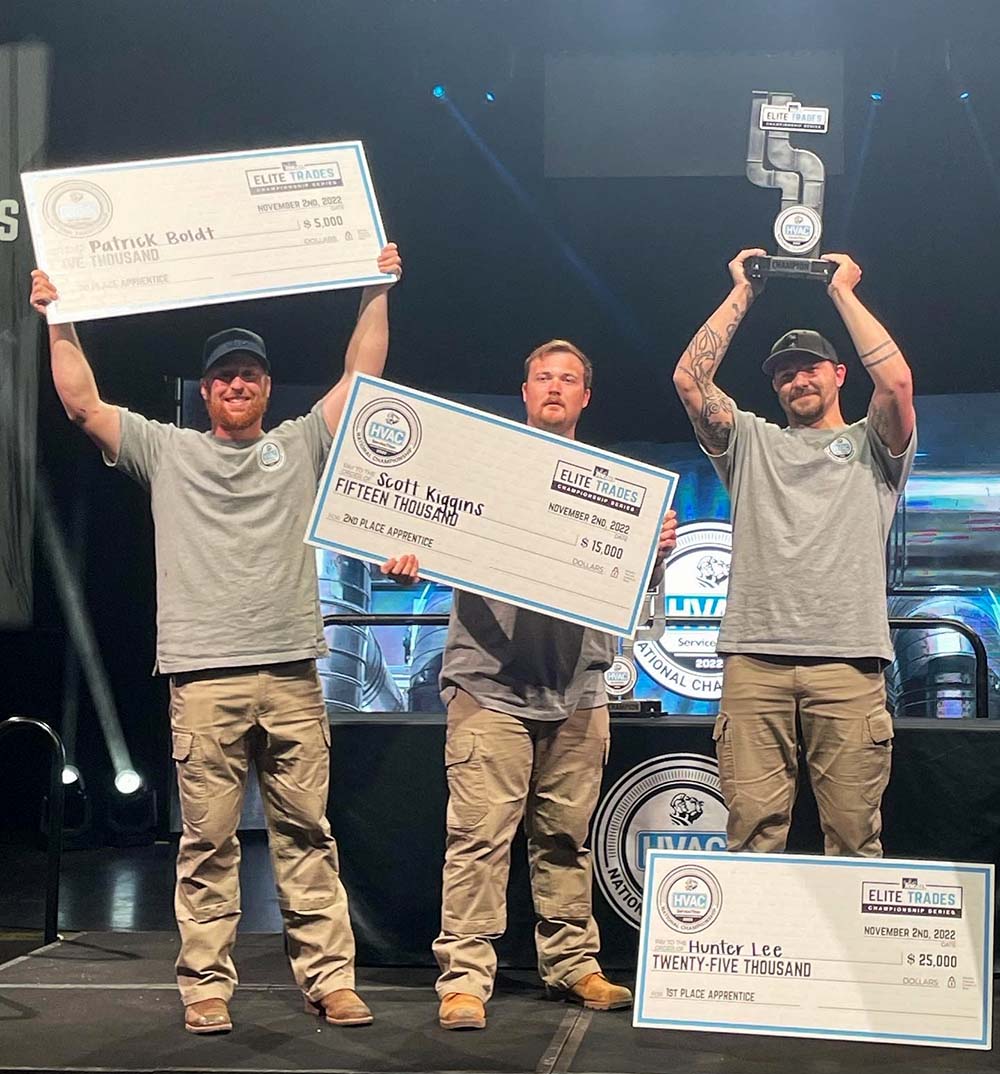 Shwert said he felt more like he was competing against himself.

“I felt like we were all one team,” he said. “We were supportive of each other.”

With his prize money, Shwert plans to first buy a cable subscription so he can revisit the competition on TV. The Shwerts will also get a new stove, and he and Ashley plan a vacation in California with their son, also named Mack, and daughter, Stella.

“I owe them a family vacation,” Shwert said.

The National Championship was designed to bring attention to the fulfillment that can be found in a career as an HVAC technician and to honor those who keep the nation’s heating and cooling systems up and running.

“It all starts with awareness — celebrating and showcasing the talents of the great people in the trades,” said Chris Hunter, director of customer relations at ServiceTitan, which offers software to support skilled trades companies. “This may put the trades on somebody’s radar.” 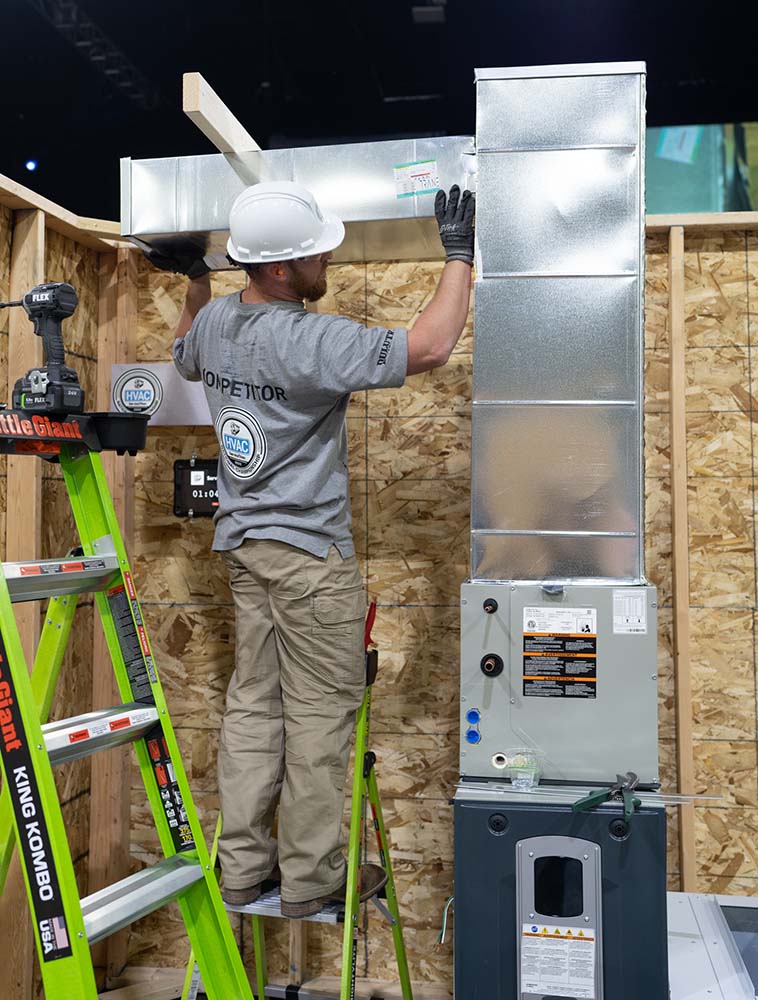 DUCT WORK: Patrick Boldt installs a duct on an HVAC system during the semifinal round in the ServiceTitan HVAC National Championship in Tampa in November. Boldt finished third in the apprentice division. (Courtesy of Intersport)

“The whole thing was just wicked cool, that they were doing this competition for the trades,” said Shwert.

The HVAC contest, in both divisions, started with an online quiz, more than 1,000 of which were attempted nationwide, Hunter said. The second round, a brazing challenge (contestants had to submit an unedited video showing their process), whittled the number of contestants to 15 professionals and 15 apprentices.

During the semifinals and then the finals in Tampa, contestants had to completely install an HVAC system, according to written specifications, over the two rounds. 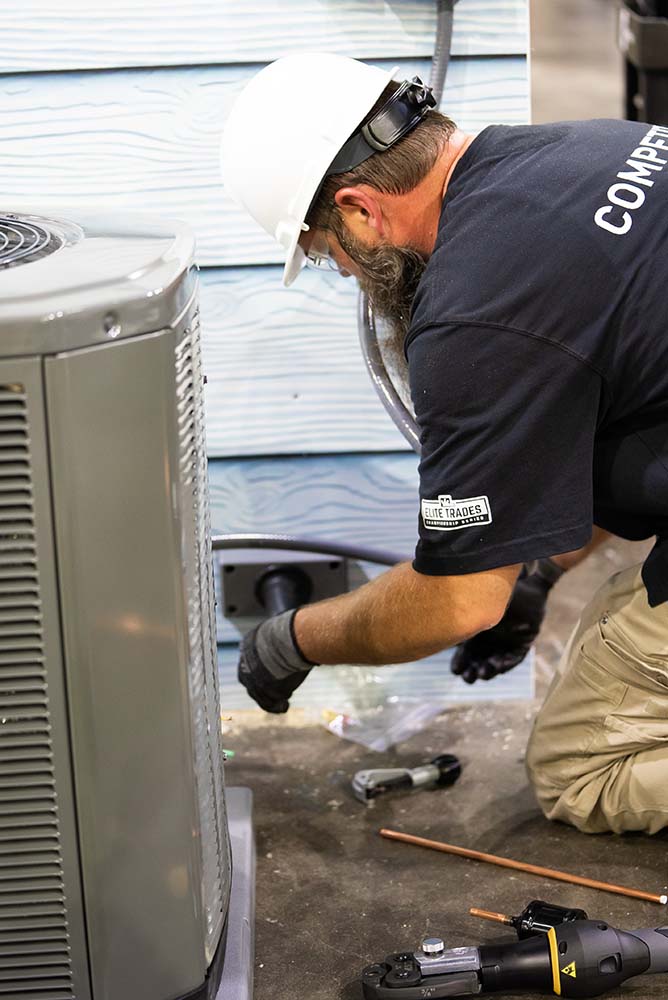 RACING THE CLOCK: Mack Shwert works on an a/c unit during the ServiceTitan HVAC National Championship. Professionals had one hour to complete assigned tasks during both the semifinal and final rounds; Shwert, who placed first in the professional division, said he’s “been in a time crunch forever” on his jobs and that working quickly didn’t faze him. (Courtesy of Intersport)

Professionals, in the first round, had to cut and install PVC intake and exhaust piping, attach a condensate collection system, and post required signage. In the second round, they had to cut and run copper refrigerant piping from the condenser to the evaporator coil, install a thermostat, and complete the wiring.

Each round was timed for one hour (though 10 minutes were added to the initial round for apprentices, given the number of tasks they had to do). Contestants were judged according to a tight rubric that left no room for favoritism, Hunter said.

Hunter, who helped design the contest and was the chief judge, said the tasks were typical of what apprentices and professionals have to do in the field.

“This was a real-world scenario,” he said.

ServiceTitan, Trane, and American Standard Heating and Air Conditioning were among the sponsors of the contest, which was organized by Intersport.