Our industry lost a true pioneer on May 3, 2022. Rob Falke, president of National Comfort Institute Inc. (NCI), passed away from complications related to COVID-19. Rob was my mentor, friend, and role model. He played a large role in where I am today and is someone who encouraged me to write. If you look close enough, you will see Rob’s influence woven throughout each article I write.

I met Rob in January 2001 when I was about to leave our family HVAC company and the industry. Back then, I saw HVAC as a dead end with no future. But because of Rob’s influence, I stayed in the business and set out on a course I never imagined. He introduced me to opportunities I never knew existed through airside measurement that made work purposeful. After successfully using what Rob taught for close to a decade, I went to work for him in December 2010.

The technical principles that Rob taught me were all about air. He introduced me to static pressure, airflow, air balancing, duct renovation, HVAC system performance, and system scoring. While all were valuable concepts that changed our family business, the most beneficial lessons I learned from Rob were about life. Working with him made me a better person every single day.

I saw three areas he put a lot of effort: attitude, integrity, and relationships (AIR). Instead of something we measure in an HVAC system, AIR became an acronym for what to focus on to become a better person. Let’s look at what Rob Falke taught me about AIR and why it makes so much difference in who we are.

One way Rob helped me cure my occasional bad attitude was to be an example of a good attitude. When my bad attitude tried to creep in, he had me focus on solutions. I would often come to him complaining about a problem and he would stop me and simply ask, “How do we fix that?”

The questions frustrated me at first, but then he told me something that forever changed how I viewed complaining. Rob said, “Anytime you come to someone with a problem and don’t have a solution, it means you’re whining.”

Attitude is a choice we make and the filter we view everything through. It provides clarity or distorts our perceptions. We choose whether we will have a negative or positive outlook on life. After all, the only thing we have control over is our thoughts. We can’t control daily events, but we can control how we respond to them. We have a choice, and attitude determines our responses.

It’s easy to forget that our attitude comes through in everything we do. It leaks out of us and people can sense it like a dog picks up on fear. You can fake attitude, but people know whether it’s authentic or not. Attitude isn’t about smiling all the time and being constantly upbeat. Instead, it’s about having the right mindset and doing the right things.

At our company, we unknowingly installed HVAC systems that failed to deliver what we promised our customers. To me, this was a matter of integrity. We made promises and did not know if we were fulfilling them because we didn’t know how to measure. Now that I had this knowledge, I felt we had to make things right as we moved forward. NCI taught us how to use measurements to help customers understand what they needed instead of smoke and mirrors and high-pressure sales tactics.

As I put curriculum together for NCI, Rob frequently emphasized the principles of integrity. He would ask me, “Is this what the industry really needs?” or, “Will this take the industry where it needs to go?” He asked me these questions so I would focus on what the industry could use to grow and improve instead of random sequences of information with no direction.

As I worked at NCI, Rob began to notice I was a workaholic. He challenged me to be honest with myself and have integrity towards my balance between work and family. He saw a glaring discrepancy between where I was spending my time.

Instead of praising me for the long hours, Rob challenged me to better prioritize my time. He always wanted to know if I was maintaining balance. When there was too much work or time on the road, he told me to get back in balance. Rob knew my family needed me, so if I did too much in one area, I had to pay the other back.

One idea Rob gave me to maintain balance was to imagine my home after my boys were all grown up and had moved out. He said to cherish the chaos that comes from an active house because one day the silence will deafen you. You’ll give anything to have one moment of the noise back.

My boys were young when Rob gave me that guidance. They’re grown up now and not around as much since they’re living their own lives. I’m so grateful that I acted on his advice instead of having to deal with the regret of ignoring him.

There are consequences for failing to have the integrity to maintain balance. Don’t fall for society’s “hustle and grind 24/7 culture.” Instead, take time for what is important — cherish each day like it’s your last. Rob did.

Of all the things that Rob taught me, the power of relationships was most important. He knew how to have genuine relationships with people. It was one of his greatest gifts and strengths. 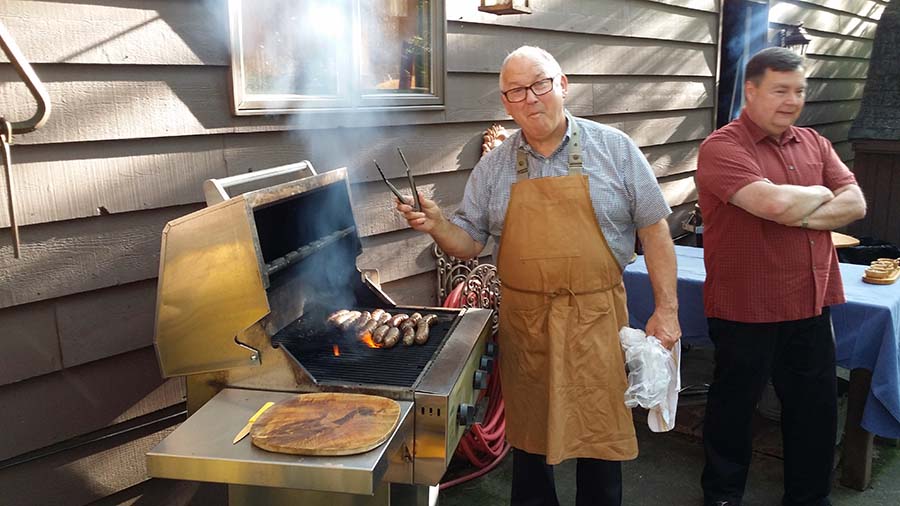 BALANCE: Each summer, Rob held “Grazing at the Falke’s” for all NCI trainers across the country to get together. He believed play was just as important as work. (Courtesy of David Richardson)

Rob knew how to listen to people. He made it an activity where he was fully present and engaged. You knew you could trust him with anything and that he had your best interest at heart. Rob had a unique ability to focus on one person at a time. He made you feel like the world revolved around you at that moment.

Another gift that attracted people to Rob was how he could bring out the best in others. His questions prompted you to talk about yourself so that he could ask more questions about you. Each question was aimed at seeing how he could help you grow and improve. It never ceased to amaze me how masterful he was at conversation when others did all the talking.

It’s hard to have relationships with others if you’re a know-it-all. To prevent this trap, Rob often reminded me of a Theodore Roosevelt quote, “Nobody cares how much you know, until they know how much you care.” He wanted me to have the proper motives for teaching and sharing information. While it was important to contribute, it had to be in a way that elevated others instead of exalting myself or trying to prove how smart I was.

I saw how much of a difference it made when I put others first. It changed my viewpoint to where I looked for ways to help others solve their problems. There is a massive difference between looking for how to help versus what you can get from others. One is based on long-term relationships, the other on short-term gain.

Genuinely wanting to help others with no expectation of something in return is why Rob was kind. It was also why he was so loved and respected in both his business and personal life. Because of this belief, he taught each of us at NCI to serve our customers well and believe they deserve the best.

How is Your AIR?

Each of us can improve the HVAC industry in small steps. Change doesn’t happen all at once. Instead, it occurs slowly, with consistent forward movement. When I met Rob, our industry barely talked about static pressure, airflow, and air balancing. However, two decades later, these topics are some of the first that people discuss on social media.

I hope that I’ve given you some insight into the influence that this great man had on my life. If the space allowed, I could write a book about the times I had with Rob and the lessons he taught me. I’ve attempted to sum a few of them up in this article as a tribute to someone who will always hold a special place in my heart.

There’s more to life than HVAC. Each of us makes a difference in the lives of those we come in contact with. We either act as radiators and add warmth and energy to others, or we act as evaporators and suck the warmth and energy out of those around us. You make that decision each day.

Rob believed in the value that our industry provides and knew that it would take all of us working together to see it reach its true potential. I encourage you to measure your AIR. How are you doing? What are you doing right and what can you improve? Remember, each of us can make a difference if we do the right thing one customer, one system, one day at a time.

If you’re fortunate enough to have a mentor or someone who made a difference in your life, call them now and thank them. You may not get another chance.

While Rob is the father of residential air balancing and HVAC system performance, he taught many of us so much more. His legacy will not just be in the advances he made in HVAC but in the lives he touched while making those improvements. Rest in peace, sir.