Selling contractors need to prepare for process of scrutiny

The past year saw a tremendous amount of consolidation in the industry as private equity investors continue to back the acquisitions of HVAC contractors. There were dozens of deals made and many major regional players became part of multi-state platforms. Those in the business are now watching to see who will be bought next and when the rapid pace of deals will slow. It proved a major topic at this year’s ACCA conference.

Chris Yano, CEO of Ryno Strategic Services, said 18 of his customers have been acquired by PE firms in the past year and a half. SF&P Advisors, a business brokerage for HVAC contractors, oversaw 46 deals between contractors and PE firms last year, with 23 coming in the fourth quarter. The brokers did five deals in the first quarter of 2022.

Some HVAC contractors field dozens of calls from potential buyers these days. The increased competition means that the amounts offered to HVAC contractors keep growing. Ray Isaac recently sold interest in his family’s HVAC business to a PE firm. Isaac advises potential sellers to look at more than the dollar signs.

“The highest price is great, but it’s not always the best way,” he said.

Different buyers seek different relationships with the selling contractor. In Isaac’s case, he was able to stay with the company and now works on acquiring other HVAC firms to grow a national platform. Some buyers require the former owners stay for at least for a short period of time, while others want to take complete control on day one. HVAC contractors need to know what kind of relationship they really want.

“After the deal closes, you have to live with these folks,” said Fred Silberstein, president of SF&P.

Continue to Run Business as if Never Selling

The PE investors have to live with the contractor, as well. That’s why they ask a lot of questions before the deal finalizes. Isaac said his investors asked about a gas tank that he removed in 1997. It surprises many contractors how much of what they do becomes so ingrained they find it difficult to explain, Silberstein said.

Isaac said it’s crucial to remain focused on the business during this process even though it can take up a lot of time. Silberstein advises against making major changes, such as switching out software systems or giving out big raises.

“Make sure you continue to run that business as if you were never going to sell it,” Isaac said.

“There are buyers for every type of business,” Silberstein said.

That’s driving up the costs for HVAC firms and creating some issues for independent contractors. Dan Weis owned Weis Comfort Systems with his brother, Tom. In 2010, the pair started a growth campaign by buying up their smaller competitors. In the past few years, the cost of acquiring those companies started skyrocketing, Weis said. The brothers eventually sold their company to a PE-backed platform.

“(The earlier consolidators) were buying, but they didn’t understand operations. So many great businesses were ruined by the pressure of the stock price.”
Ken Goodrich
CEO, Goettl Air Conditioning & Plumbing

When will this all end? Many HVAC contractors point to the consolidation craze of the ‘90s, which ended with deals unwinding and buyers selling back companies at a discount. Ken Goodrich, CEO of Goettl Air Conditioning & Plumbing, a PE-backed HVAC firm, said a collapse of that scale is unlikely. 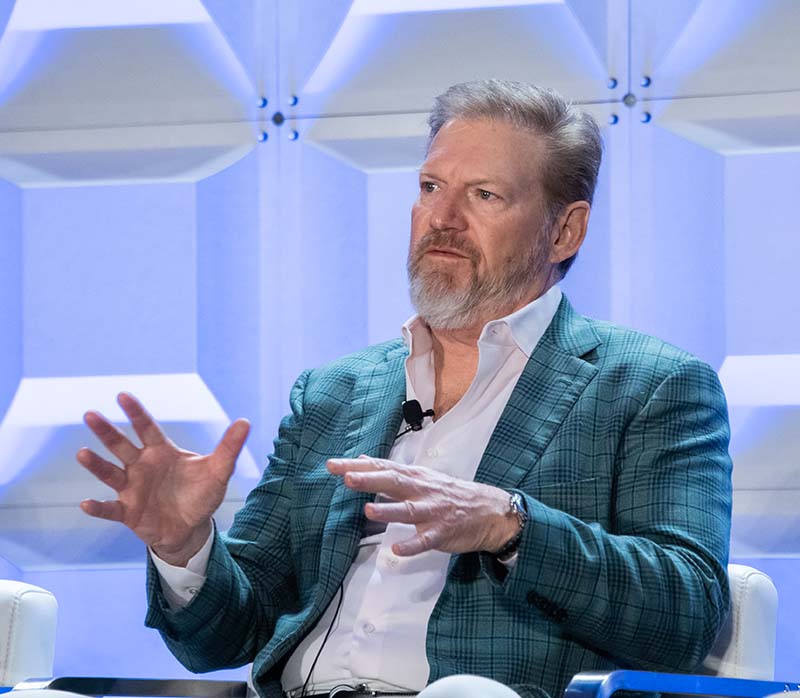 THAT WAS THEN, THIS IS NOW: Ken Goodrich, CEO of Goettl Air Conditioning & Plumbing, explains to attendees at this year’s ACCA conference how the consolidation wave sweeping HVAC contractors today is different than in the ‘90s. (Courtesy of ACCA)

Goodrich said the PE firms have better management teams in place than the consolidators of the ‘90s did. They also have access to more data and the technology to process that information. The current buyers bring intellectual as well as monetary capital when they make an acquisition, he said.

“(The earlier consolidators) were buying, but they didn’t understand operations,” Goodrich said.

PE investors also have a different motivation than the publicly traded consolidators. They don’t have to answer to Wall Street on a quarterly basis, so PE firms can make more strategic decisions. That short-term focus is what caused most of the problems in the ‘90s, Goodrich said.

“So many great businesses were ruined by the pressure of the stock price,” he said.

There are a few factors that could at least slow the pace of PE activity in the HVAC space. Moves by the government impact the ability of PE firms to make large investments. President Joe Biden has proposed several changes to the tax code that would damper activity.

More immediate and likely are increases to the federal funds rate. PE firms usually borrow money at this rate plus a few hundred basis points. The rate currently stands at around .5% after the recent hike. It would have to reach levels not seen since before the financial crisis to have a major impact, Silberstein said.

Money Made on the Sale

One of these is a series of failures that scare off investors. The current consolidation trend started in 2015, with the creation of The Wrench Group, Silberstein said. Right now, money keeps pouring in as financing remains available and investors seek returns. Silberstein said that given the volume of activity, it’s likely some will eventually fail, and that could signal the market to back off from HVAC purchases.

PE companies get the biggest payoff when they sell a business. Usually this happens when a company grows to size beyond the range of that firm’s model. So far, there has been a bigger buyer for every HVAC company, such as the Partners Group buying Reedy Industries from Audax Private Equity. But as consolidation continues, options grow limited.

“There’s fewer buyers at the top, so they have to explore different options,” Silberstein said.

There are a few such options, but the one many in the industry are watching for is an HVAC roll-up going public. There is only one HVAC firm that is publicly traded right now. That might change in the near future.