This website requires certain cookies to work and uses other cookies to help you have the best experience. By visiting this website, certain cookies have already been set, which you may delete and block. By closing this message or continuing to use our site, you agree to the use of cookies. Visit our updated privacy and cookie policy to learn more.
Home » Pennsylvania Trade School Grows Thanks to Manufacturers, Organizations
NewsTraining and EducationTraining and Education for Teachers and Students

“We believe that education is a pathway to prosperity,” said Pedro Rivera, president, Thaddeus Steven College of Technology. “Our college is an instrument of change in the lives of our students, graduates, our community, and especially our business and industry partners.”

As heating and cooling equipment gets more sophisticated, the technicians — and the training they receive — must follow suit. The support received by the college is an indication that the industry agrees. 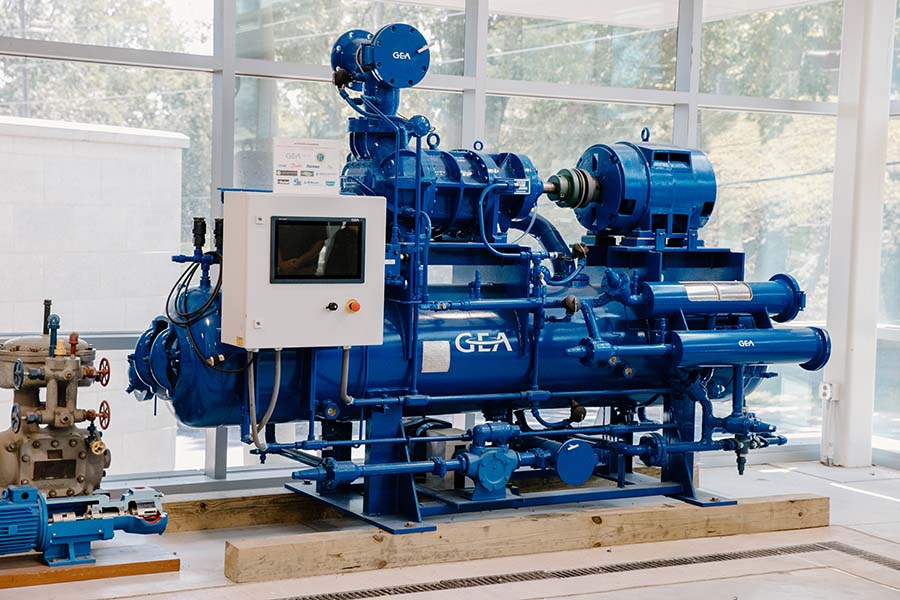 One trade organization, the Refrigerating Engineers and Technicians Association (RETA) and its membership — manufacturers, contracting firms, and engineers — take the commitment to support the school seriously, and have been heavily involved with funding and curriculum development. Due to RETA’s support and that of their members, Thaddeus Stevens College is able to provide an education that’s unique in the Mid-Atlantic region. For example, RETA and GEA donated an ammonia chiller to the school.

“Initially, when the chiller was donated, our plan was to use it to cool this facility while also using it for training purposes,” said Timothy Strunk, HVACR Instructor. “We later learned that we couldn’t use an ammonia chiller due to our proximity to an elementary school. So GEA turned it into a cut-away.” 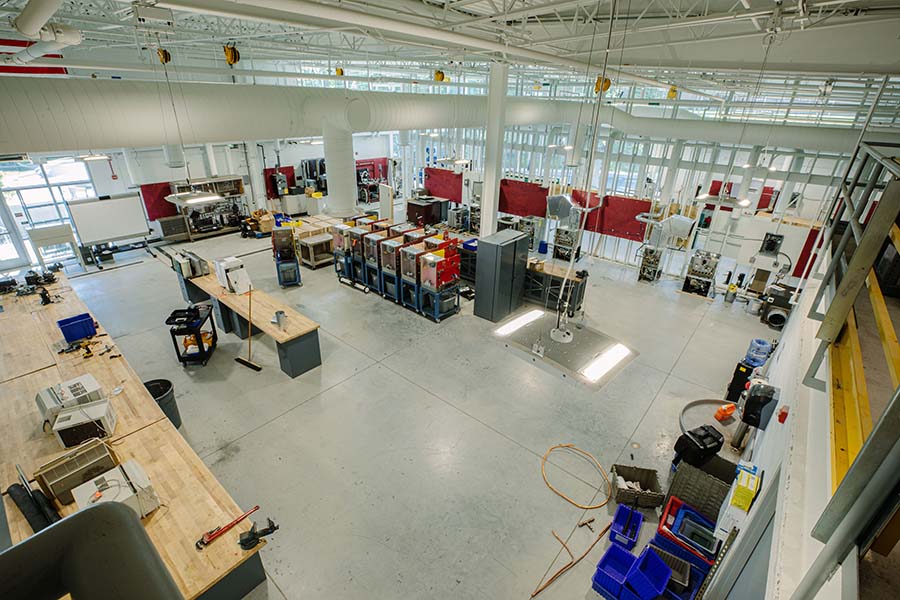 FACILITY: A portion of the HVACR laboratory space. (Courtesy of Dan Vastyan)

Use of the HVACR lab began immediately, even before it was fully complete. Setting up the commercial and industrial equipment has taken more time, especially considering that some of the equipment needed to be customized for the college’s purposes.

“Despite being inoperable as part of the cooling system, the chiller controls are fully functional as a dry training unit,” Strunk continued. “The indicator lights are functional, and it’s piped and wired to a pair of evaporator coils donated by Evapco. We can perform most functions, like running it through a defrost cycle. Students can see the coil fans shut off. Many times, when students go through HVACR training programs, there are no chillers to train on, especially ammonia chillers. This is one way we can teach commercial/industrial cooling in a hands-on manner.” 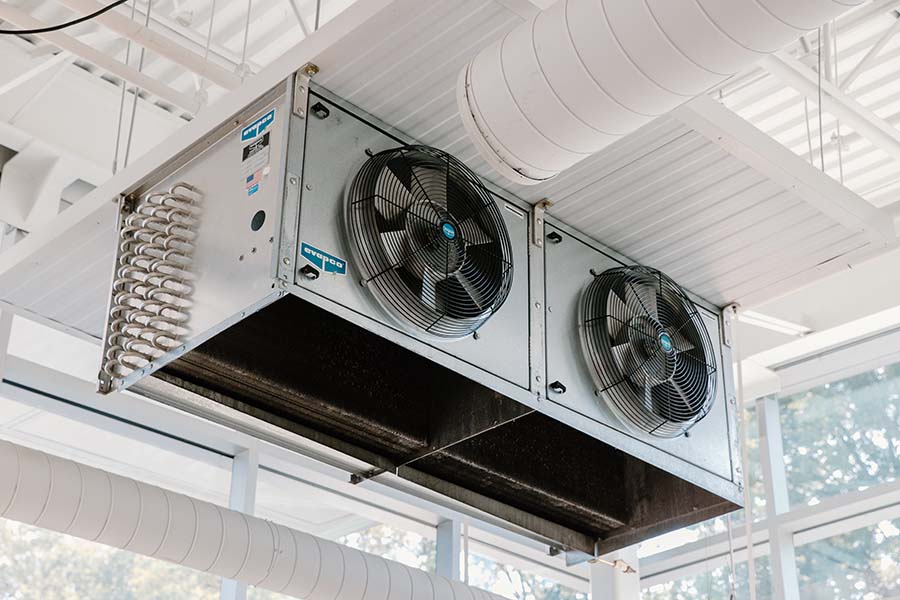 Evapco, a RETA member, also aided the college on the heating side of the program. With more than 30 live-fire training boilers, heat must go somewhere. 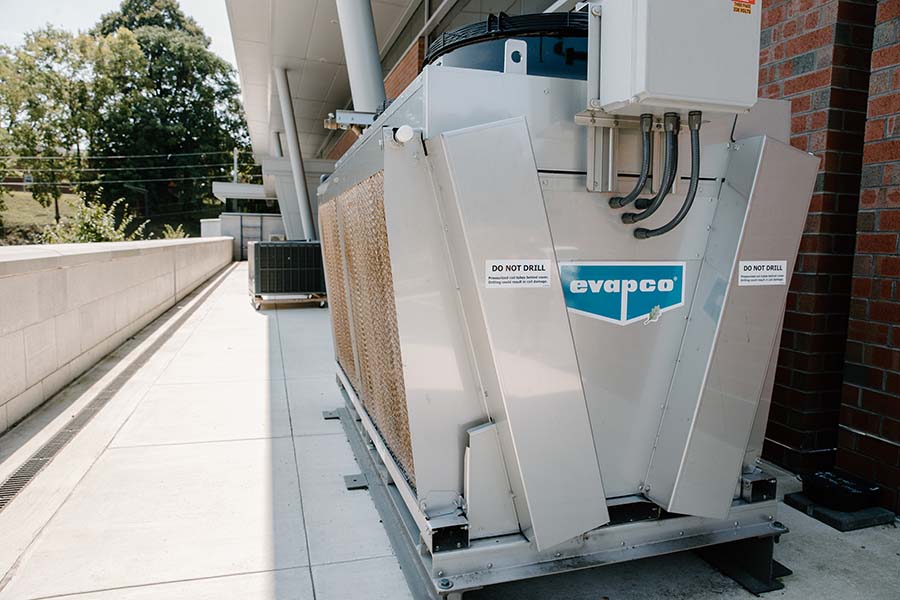 The training boilers are used to heat the facility during the heating season. Through the rest of the year, when there’s no call for space heat, BTUs must be rejected — the questions was, “To where?” All the boilers and several other pieces of refrigeration equipment are piped to a main heat reclamation loop. Once the reclamation loop is 100% complete, all waste heat will be rejected through a 600 MBH, closed-circuit Evapco eco-Air dry cooler with adiabatic pre-cooling.

Evapco provided this air-cooled fluid cooler to support the HVAC system loads of their expanding HVACR labs, while also providing a hands-on learning experience. As dry and adiabatic coolers gain traction in the industrial and HVAC markets, it only made sense to educate students on the latest, most efficient products.

“In addition to the learning opportunities, this particular unit was selected due to the installation location, and capacity required,” said Alex Smith, Evapco regional sales manager. “The school is adjacent to a residential area where minimizing sound levels is a priority. To keep noise levels very low, the cooler is equipped with EC fan assemblies in lieu of NEMA assemblies.”

The adiabatic system specified for the college maximizes the cooling capacity allows flexibility in capacity control when the HVAC system loads fluctuates. Including these components provides students hands-on experience with technologies not typically found on conventional commercial and industrial systems.

The heat reclamation system was partially funded by grants from Tyson Foods, in addition to financial support from RETA and equipment donations from Evapco and Danfoss.

Program leadership at Thaddeus Stevens College is quick to shower RETA’s Southeastern Pennsylvania Chapter with praise, and for good reason. For decades, the organization has helped immensely to promote and support the school. The relationship is mutually beneficial.

“Now more than ever, RETA members, like my employer, need a larger pool of talent to hire from,” said Steve Flick, RETA treasurer and business developer for Lancaster-based Triangle Refrigeration HVAC, a CoolSys company, which has donated time and material to the school and also routinely hires from its graduating classes. “Increasing the size of the student body and improving the education at Thaddeus Stevens is the most effective way bolster the workforce in our area.”

In fact, RETA holds a large trade expo and job fair at the college each year. Now in its sixteenth year, it’s an important event for all involved. RETA members come expecting to collect resumes, while outgoing students have numerous prospects and job offers by the end of the event. Aside from the expo, RETA often helps place students with employers throughout the year.

Jonathan Klein is an HVACR student at Thaddeus Stevens.

“Even as a first-year student, I already have job offers from mechanical contractors, both commercial and residential,” he said. “I’m sure I’ll be getting more in my second year. It’s exciting!

“I want to learn all the new technologies in order to make my job easier and keep up with the evolving times,” he added. “I love the balance between lecture and hands-on work in the shop. My professor, Matthew Bixler, really walks us through what entering the industry will be like.”

RETA’s goal in supporting Thaddeus Stevens College is to create more industrial-specific refrigeration training programs, and to increase the number of potential hires that have some industrial refrigeration background.

“The combination of a motivated RETA regional chapter and an exceptionally-well led technical trade college has created a unique opportunity for the HVAC and refrigeration trades here,” said Flick. “RETA National has taken notice of our chapter’s relationship with Thaddeus Stevens and is hoping to create similar partnerships in other parts of the country. It’s great for the companies in this area, it’s great for the students, and ultimately it benefits the customer.”

“RETA even uses the expo as a fundraising event for the college,” added Strunk. “A portion of the funds raised at the event are earmarked for the college. If we have a project that needs financial assistance — like the heat reclamation loop, for example — we approach RETA for funding. The organization has even covered things like student transportation to and from trade shows. Many RETA members, such as Evapco and Triangle Refrigeration HVAC, support the school individually as well.”

The college’s graduating class is growing every year. Before the Center of HVAC technology was constructed, physical building constrains and lack of high-tech equipment were the limiting factors for the number of students the program could turn out. Those are no longer a concern, thanks to the school’s leadership and to the HVACR industry.

Thaddeus Stevens College averages an overall 97% job placement rate for its graduates (class of 2020). Locally, there’s strong pull from the industrial and commercial refrigeration side of the industry. This is primarily due to the presence of large food corporations, such as Tyson, Beyond Meat, Hershey Foods, Annie's Pretzels, and Turkey Hill, among others.

“I already feel well incredibly prepared for any job I may get,” said Klein. “Of course, there will always some things that one can only learn in the field, but having access to great professors and hands-on equipment training has made me feel like I’m already a step ahead. I want a job where I can work with both my head and my heads, and where I won’t be doing the same thing every day. I feel HVAC can give me that. I would tell graduating high school students that there are more options than just a four-year college, with good pay and great job security.”