Computer software for HVAC contractors has expanded from a business management tool that helps with scheduling, dispatching, and bookkeeping into a versatile asset that can also serve as a technician’s assistant, warehouse clerk, salesperson, and more — often during the same service call.

Contractors are using computer software, especially mobile apps accessed through a smartphone or computer tablet, to help techs in the field diagnose equipment problems, keep inventory, document work performed, and explain it to their customers. Some HVAC apps can also build estimates, present service options to homeowners and business owners, access financing for big-ticket repairs and replacements, and process payments.

“This is a tool that techs are using on every job, and we’re consistently providing” support, said Aaron Salow, founder and CEO of XOi Technologies, a Nashville-based software company built around three basic field-service trades that touch every home and business: HVAC, electrical, and plumbing.

Salow said he launched XOi in 2013 after seeing that what he calls the “curb-to-curb space” in field-service businesses was “vastly underserved.”

Chris Hunter, who started his career as an HVAC technician and is now director of customer relations at ServiceTitan, a Los Angeles-based company founded in 2007 that has a software platform for trades businesses that serves more than 7,500 customers in the United States and Canada, had a similar awakening.

“I saw the need,” said Hunter, who built an HVAC, plumbing, and electrical contracting business called Hunter Super Techs in Ardmore, Oklahoma, before joining ServiceTitan. “I felt the pain of the way the industry did things.”

Hunter signed his company up with ServiceTitan in 2014.

“The ability to have extreme visibility into all aspects of your business ... that helped me right away,” added Hunter.

There are more than a dozen players in the U.S. HVAC field-service software market, and plenty of movement in the industry.

For example, Bluon Inc., in Irvine, California, recently announced nearly $37 million in new financing for the development of its e-commerce platform, further software development, and the growth of its sales and technical support teams. ServiceTitan and XOi last fall formed a partnership that’s described as an expansion of the existing integration of those two systems. And Successware, based in Columbia, Maryland, is planning a February release of a new communications system that will be able to interact with phone calls, emails, text messages and even messages sent via social media, plus a completely revamped office platform to be launched later this year.

“Everything the tech needs to do the job and upsell is in the mobile app.”
- Tony Nicolaidis
Chief Revenue Officer, Successware 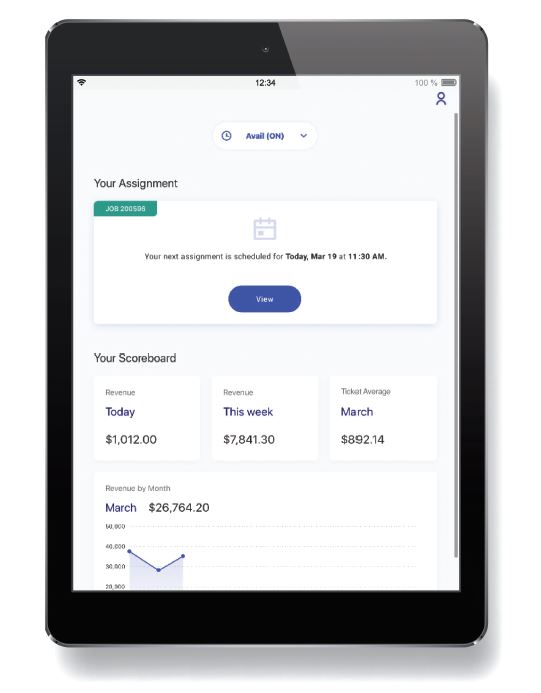 HOME PAGE: A screenshot from Successware shows what a technician would see on his or her home page, listing the next call and a dashboard listing various revenue metrics. (Courtesy of Successware, click to enlarge.)

“Everything the tech needs to do the job and upsell is in the mobile app,” said Tony Nicolaidis, chief revenue officer at Successware, which is a veteran in field-services software that dates back to 1995.

The Successware app will give a technician the service history of a particular address, locate any needed parts at a nearby supplier, prompt a tech to take photos or videos of the work, and, if needed, connect with the head office via FaceTime for backup and mentoring.

Software also helps HVAC contractors with incoming service calls, dispatching, geolocation of job sites, pre-built forms that need to be completed before a job can be closed out, and explaining to customers — with the help of photographs and videos — what HVAC problems need to be fixed.

“It sets the tech up for success before they even get there,” said Hunter.

At XOi, the software is focused more on the technical aspects of a trade rather than on ancillary tasks such as dispatching and accounting. HVAC techs start a job by taking a photo of the data plate on the equipment to be serviced; the app then calls up a service history for that unit as well as available information on that make and model, such as manuals, wiring diagrams, and service bulletins. 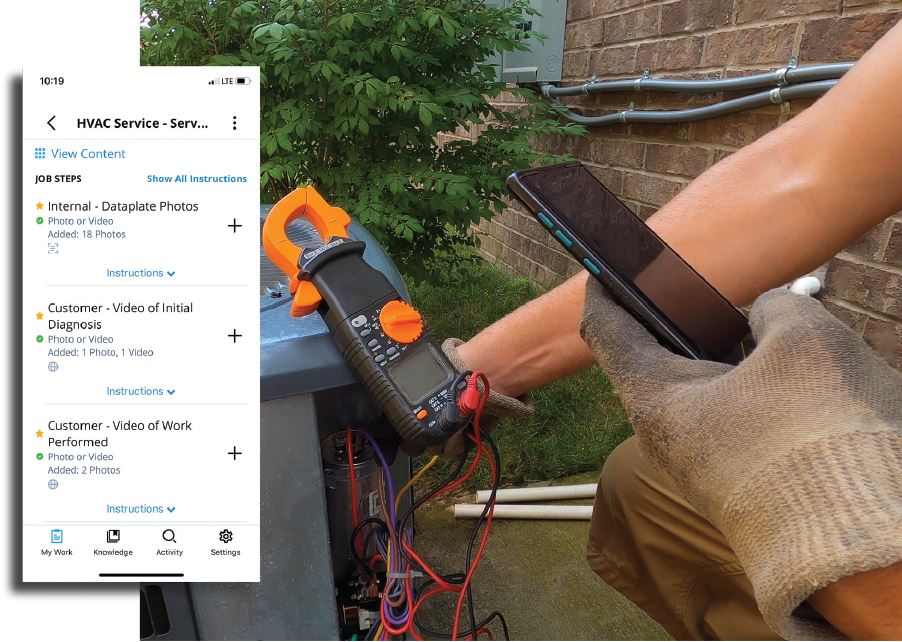 DIAGNOSE, DOCUMENT: Technicians can use some apps to troubleshoot HVAC system problems and document their work. The inset shows prompts that an HVAC technician might see while using an XOi Technologies app. (Courtesy of XOi Technologies)

“The tech the hero there,” said Salow, the XOi founder. “And the ability to give them tools they can use is going to expand your business.”

XOi can also links a techs with the support center at his or her employer, if offered, and to support centers that some equipment manufacturers have available; XOi also started its own virtual mentoring center late last year.

The multilevel communications available through its software — between contractors, distributors, OEMs, and customers — allow for information-sharing that can improve the HVAC industry as a whole, Salow said. Manufacturers, for example, are able to get better feedback on how their products are performing in the field.

“All the way through that value chain, we’re providing solutions,” he said.

On the customer-facing side, HVAC software can present equipment replacement options in a “good-better-best” format, with upfront pricing included, create estimates and invoices, guide buyers through a quick credit-approval process, and accept payments by credit and debit cards, checks, and even electronic transfers.

Customers can be invited to give reviews once a job is completed.

“Most technicians love getting a good review,” said Hunter.

Successware’s field-service software can either be hosted on a contractor client’s own server or in the cloud, and the latter arrangement seems to be the trend in the industry.

Successware’s next-generation platform will be entirely in the cloud, a company spokeswoman said. The XOi and ServiceTitan HVAC platforms are cloud-based.

Hunter said he became a cloud convert back when he ran Hunter Super Techs and his shop’s server crashed on a hot Oklahoma summer day.

“We’ve got all these techs who don’t know where to go. We don’t know how to access the data,” Hunter said. “That’s the day we made the switch.”

Documenting repair and installation work, through HVAC software, is another trend those in the industry see.

Invention might be the mother of necessity in that case: Nicolaidis, at Successware, said he’s seeing more and more contractors that are requiring techs to take before-and-after photographs or videos as part of every call.

“Customers love to see what was done at their home,” said Salow