Measuring the success of the current wave of HVACR consolidation is difficult, as the answer varies depending on who you ask. For our purposes, let’s start by looking at it from the perspective of the private equity (PE) industry. PE acquisitions are fueling this consolidation wave, so understanding their approach and wins is integral to understanding consolidation overall. After reviewing the PE industry success, we will look at how consolidation is working for owners as it relates to rollover equity in PE-backed companies.

First off, it’s important to know how PE firms make money. While PE firms do vary in their investment approach, historically they have followed one traditional model — they raise capital based on an investment thesis with an expected rate of return. Once they have raised their targeted amount of capital, they focus on investing that money by acquiring businesses and often growing those businesses via acquisition.

In the current wave of HVACR consolidation, the PE’s initial acquisition is often in a large HVACR company that is called their “platform” investment. They then grow that platform primarily via additional “add-on” HVACR acquisitions. Once they have significantly increased the size of the platform via acquisitions, the PE firm exits that investments by either selling the platform to another PE firm or by taking the business public. The former option being by far the most common. The exit of an investment is how PE investors receive their returns and it’s how the PE firm itself is primarily compensated. 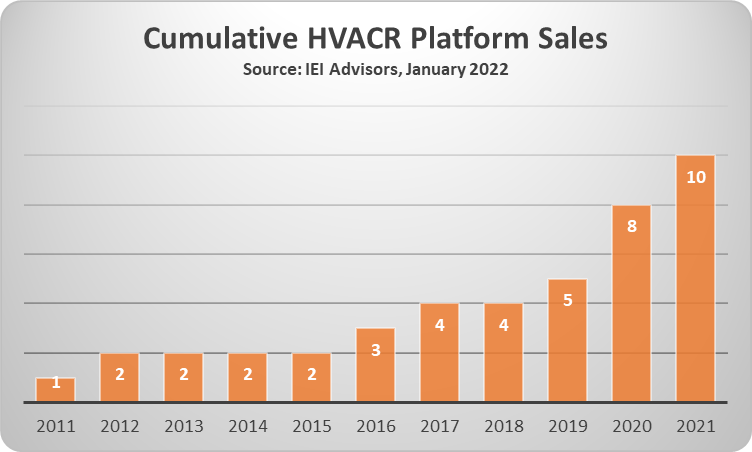 After the collapse of the initial wave of HVACR consolidation in the early 2000’s, the second wave began slowly with the first PE platform sale to another PE firm occurring in 2007. Then there was a significant lull until the second PE to PE sale in 2012. Since then, these sales are on the rise with a sharp recent increase: five transactions in the past two years. While that number may not seem significant, keep in mind that these deals are for large organizations.

A typical path for a PE backed HVACR platform company is for it to be sold initially at $150M to $250M in revenue, again at $500M to $700M in revenue, and again at around one billion in revenue. The specific size of these businesses isn’t typically disclosed when they sell so let’s make a conservative assumption of $300M per transaction. That’s $3B in HVACR revenue that has been sold from PE firm to PE firm in this second wave of consolidation. As a point of reference, Engineering News Record's recent top specialty contractor report lists the top two mechanical contractors, Emcor and Comfort Systems, at $4.1B and $1.9B in mechanical revenue.

Given that the data indicates a significant amount of success for PE firms in the second wave of consolidation, this begs another question: is this wave creating success for HVACR owners?

That is a more difficult question to answer as there are likely a wide range of experiences for the many owners that have sold their companies during this second wave. The one question that the data does help us answer though is whether there is any value to the rollover equity.

Rollover equity is the stock in the PE backed HVACR platform that owners are often asked to accept as a small or sometimes significant portion of their sale. An owner may sell their company for $10M to a PE platform company while receiving $8M in cash and $2M in stock. The owner never touches the $2M as it is used to purchase (or rollover) equity in the platform company as a part of the transaction.

Understanding the value of rollover equity is important. In the first round of consolidation, many owners were left holding worthless stock in one of the big consolidators when they collapsed. This has many owners in today’s market wary of rolling over any of the proceeds from their sale into equity.

While it’s certainly important to negotiate for cash, it’s also important to assess the opportunity to accept rollover equity. That’s a complex topic that has a lot to do with specific circumstances, but one thing the data does tell us is that owners are receiving opportunities to successfully sell their equity during this second wave.

The rollover equity that owners receive is essentially tied-up in the PE platform until there is a liquidity event. This happens whenever a platform company is sold to another PE firm. Anyone who owns stock in that platform is given the opportunity to sell their stock. The price of that stock is based on the price at which the platform company is currently being sold. At the time of sale, owners may also typically be given the option of rolling over their equity again versus selling their equity. This a risk owners may be willing to take if they believe that the new PE platform owner will successfully grow and sell the platform.

All this is to say, owners can have some confidence that consolidation is working for PE firms and that rollover equity is proving to have value in this second wave of consolidation. That certainly doesn’t mean every owner should be focused on selling to a PE backed HVACR platform as there are many options in the market today. It also doesn't mean that owners should blindly trust the value of a platforms rollover equity value. Any poorly managed platform could crumble and leave owners holding worthless stock.

However, it does mean that owners should carefully assess the rollover equity opportunities in this wave of consolidation before too quickly discounting it based on the failures of the past. The second wave of consolidation is far from the mirror image of the first wave as both PE firms and owners seek to avoid past mistakes. Peter Flippen is the owner of a business brokerage, IEI Advisors, focused on exit and succession planning for HVACR owners. Learn more at www.ieiadvisors.com.