Noise is a growing concern for commercial clients

Air handlers are the heart of an HVAC system, moving the conditioned air through a building. Like a heart, they can generate a lot of noise while operating. Manufacturers, however, are taking steps to reduce that noise.

David Lopes, director of commercial sales for Bosch Thermotechnology, said customer feedback shows that noise is a major concern. Lopes said Bosch works to reduce noise in all its equipment, from consumer products like its dishwashers to the air handlers for its water source heat pumps. He said the company approaches noise reduction as a way of improving the indoor environment.

“Noise is one of the elements of indoor air quality, for sure,” Lopes said. 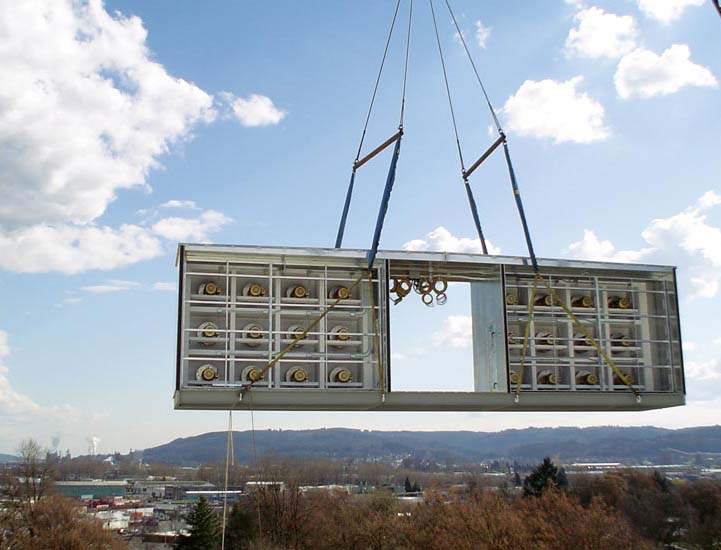 BIG ORDER: Air handlers come with a lot of moving components, which tends to create noise. Isolating and insulating the biggest sources reduces that noise. (Courtesy of Nortek)

This is especially true in schools. Just as studies show that the air students breathe impacts their academic performance, they also show that noise has the same effect, Lopes said. In fact, many school districts now must comply, at least in new construction, with the provisions of ANSI S12-60, which sets standards for the permissible level and quality of sound in school classrooms, said Kim Osborn, air solution engineer at Nortek.

Osborn said there are other rules dictating noise levels. In many new office buildings, the leases will promise a maximum sound level. Also, many cities have ordinances limiting the permissible sound levels at property lines.

So what makes air handlers produce noise, and what steps mitigate that noise? Osborn said it starts with the machinery itself, including the fans, compressors, and pumps. Then, the high-velocity air travels through ducts, also creating noise. Finally, the air reaching control and distribution devices including dampers and louvers can also add a substantial amount of sound to the space, Osborn said.

Starting at the source, one way to minimize sound is by optimizing the selection of fans. David Fly, executive director of Aaon’s Norman Asbjornson Innovation Center, said this is one of the first trade-offs that needs to be considered in designing an HVAC system. Forward-curved fans, which were the traditional design for years, made a constant noise but produced a more pleasant tone. However, forward-curved fans are less efficient than other options that might create more noise.

“Everything in engineering is a trade-off,” Fly said.

Osborn said one way to reduce fan noise is by reducing the static pressure drops in the system.

Another solution is isolating the biggest sources of noise. For example, Lopes said, much of the noise in an air handler comes from the compressor. By physically separating that, the noise is less likely to pollute the airstream. That area can then be insulated to further dampen the noise and also cut down on thermal losses.

The other main way to decrease noise, Lopes said, is through the use of variable speed. This allows the fans to regulate the airflow rather than having to depend on dampers. Air speed creates turbulence, and that makes noise. Think of a howling wind on an autumn day.

“Everything is becoming more electronic, so the advances in variable speed have been quite substantial over the past few years,” Lopes said.

Then there is the issue of the ducts. This is another example of a trade-off. Fly said fiberglass liners were once common in ductwork, reducing the noise. But they also put material in the air that many people were concerned about.

The number of people in office building at any time has been much lower in the past year and a half, and no one seems to know for sure what occupancy will be like going forward. Fly said HVAC equipment is selected to run at peak capacity, but that peak capacity isn’t what it was. He said directing airflow only to occupied areas would reduce noise as well.

Osborn said returning workers may prove more sensitive to usual office space sounds. They’ve been working in the relative quiet of their homes. Some workers will continue to work remotely, making video conferencing still crucial and the ability to hear even more important.

“When everyone is in the same room and the room is noisy, people naturally compensate and — to some extent — mentally filter out noise, since the noise is usually coming from a different direction,” Osborn said. “This is harder to do when the noise and speaker are mixed together and delivered to a single point, be it a headset or a desk speaker.”

Some projects use an acoustical engineer along with a mechanical engineer to improve sound quality, Fly said, but this isn’t common. He himself has a long background in noise reduction; the Asbjornson center is the second dedicated acoustic lab of which he has overseen the construction. It opened in 2019.

“Most jobs don’t have acoustical problems, but when you have one, you have one,” Fly said. “They jump up and surprise you.”

Industry associations like ASHRAE have developed standards for noise, Lopes said. That helps design engineers understand the impact of the equipment they are choosing. By taking steps that start the air handler and follow the air through the system, HVAC engineers and contractors can work to solve these acoustical problems for their clients.