Most of the rest of the world has relied on ductless mini-split systems for their heating and cooling needs for decades, but that has not been the case in the U.S. That’s because a majority of homes and businesses here were designed with ductwork, so central forced air HVAC units have been the equipment of choice for most of the country for a very long time.

That may be changing with the advent of ducted mini-split systems, which utilize an air handler and a home’s existing ductwork to deliver conditioned air to multiple rooms or even a whole floor. Manufacturers say these types of systems offer greater flexibility than traditional forced air systems, as well as better comfort and energy efficiency. 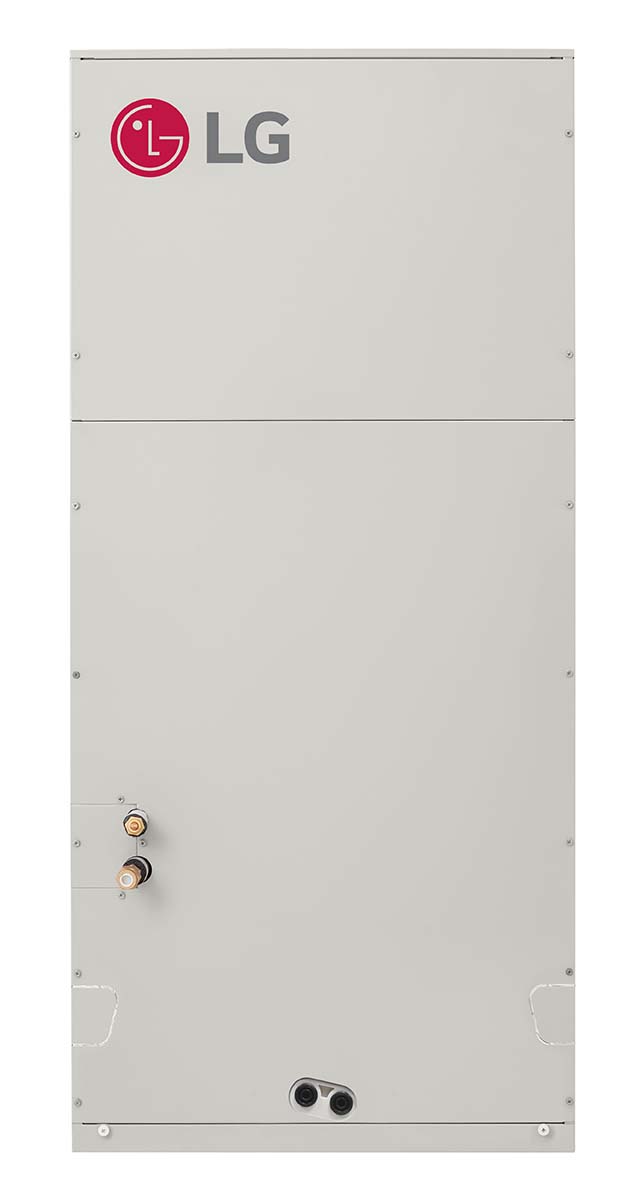 MULTIPLE OPTIONS: LG offers a low profile, high static, ducted, multi-position air handler, which can be used as a standalone one-to-one option or incorporated into the company’s Multi F solution. (Courtesy of LG)

In a ducted mini-split system, the layout of the multi-position air handler is similar to that of a traditional forced air system, explained Sean Foster, sales manager at LG Electronics USA, Air Conditioning Technologies. Both are designed to operate in vertical upflow, downflow (requires conversion kit sold separately), as well as horizontal left and horizontal right configurations.

LG offers a low profile, high static, ducted, multi-position air handler in both a 24,000 and 36,000 Btu size, which can be used as a standalone one-to-one option or incorporated into the company’s Multi F solution. Additionally, LG offers two solutions that can satisfy most climates, with equipment designed either for ambient temperature environments down to -4° F or down to -13°F.

While the layout may be similar to traditional forced air systems, ducted mini-split systems provide far greater flexibility to accommodate different kinds of homes and simplify zoning, said Chris North, senior specialist of residential product marketing at Mitsubishi Electric Trane HVAC US (METUS). Because manufacturers such as METUS offer single- and multizone systems, as well as multiple indoor unit styles, contractors have several options for dividing the home into zones, according to the owner’s preference. 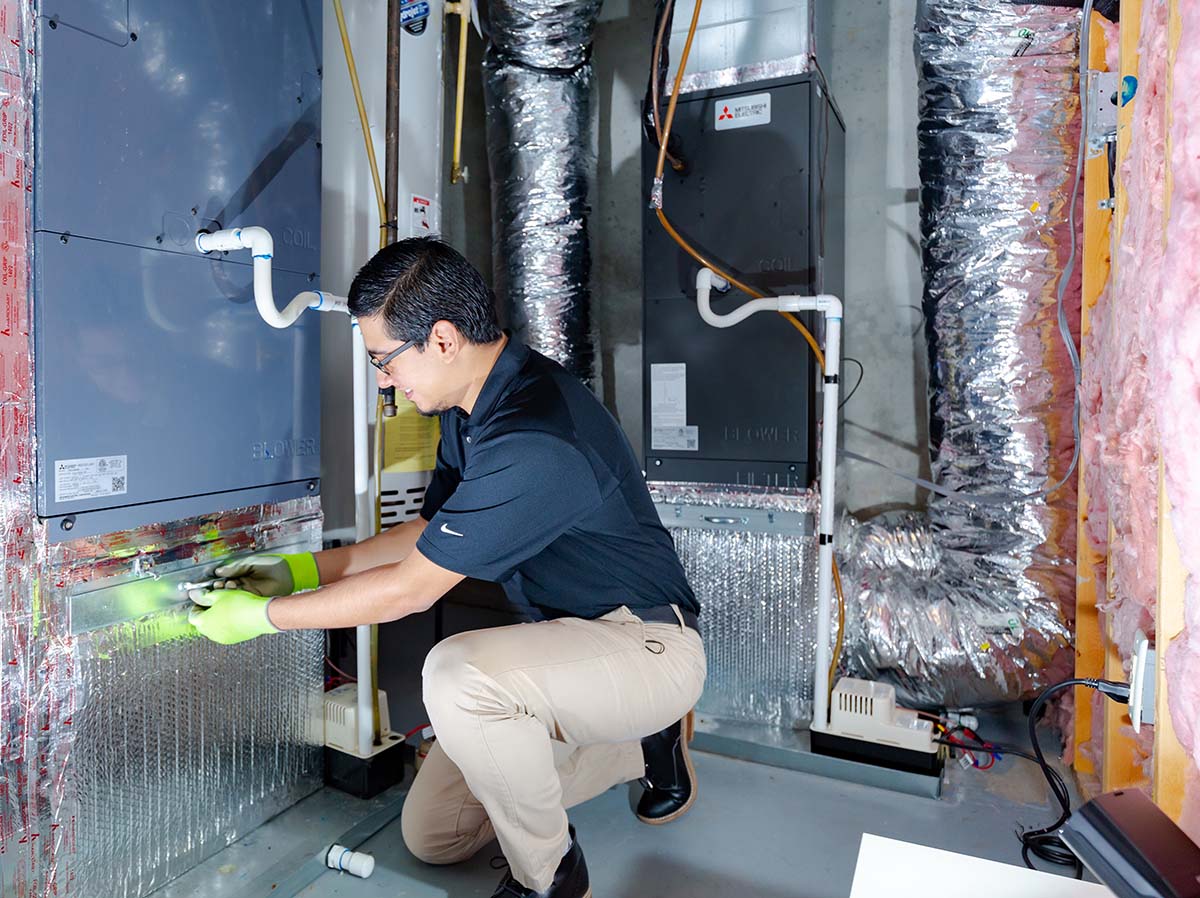 “For example, a 3-ton multi-position air handler could serve a large zone or a floor’s common areas, while a 1½ -ton, low-static, horizontal-ducted unit conditions the home’s two bedrooms,” he said. “An option is to divide a home into an east zone and a west zone — to account for amounts of sunshine — and install a single-zone mini-split system with a multiposition air handler for each.”

In a multizone, multi-split system scenario, up to two Mitsubishi Electric SVZ multiposition air handlers can be used to provide customizable comfort, while also adding up to five more zones of ductless indoor units, added North. With this arrangement, homeowners can maintain separate temperature set points for bedrooms, children’s playroom, kitchens, and other areas without compromising comfort in other parts of the home, while unoccupied zones can be “set back” for greater energy efficiency.

Mixing and matching ducted mini-splits with ductless units offers a high degree of flexibility for the contractor and provides the homeowner with many different options, said John Homenik, director of sales at Samsung. 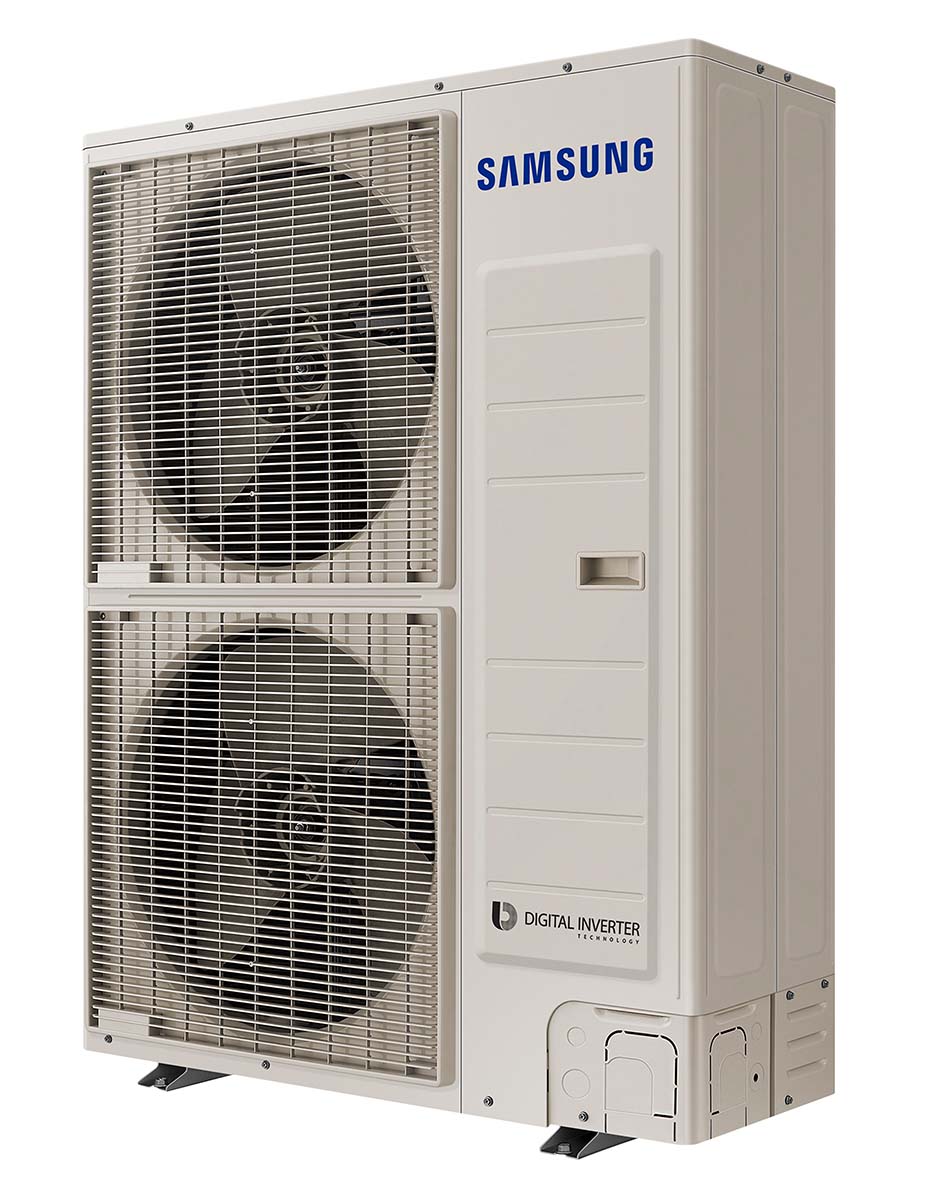 RESIDENTIAL VRF: Samsung’s DVM S Eco is a single-phase VRF system that can handle up to 10 different zones and is becoming more common in residential applications. (Courtesy of Samsung)

“This is where the technology really shines,” he said. “Homeowners can replace their traditional forced air system with a ducted unit and then can take care of a problem bedroom that is always hot or cold with a wall-mount indoor unit. At Samsung, we call our multiport units Free Joint Multi, and that system can handle up to five different zones. We also have a system named DVM S Eco, which is a single-phase VRF system that is becoming more common for residential applications. This system can handle up to 10 different zones. Samsung even has a heat recovery option in this model that can heat in one zone and cool in another from same condensing unit.”

Daikin’s VRV Life is designed for residential applications and allows a combination of ducted and ductless from a single outdoor unit. It can even include a ducted gas furnace. The Daikin Fit system was engineered to be a direct replacement opportunity for traditional ducted systems due to its capability of connecting to either a gas furnace or air handler. Daikin created both systems to work much like traditional ducted systems but with many of the high-end technology benefits associated with ductless systems, said Scott Salvage, vice president of residential product management at Daikin Comfort Technologies North America Inc.

“Daikin Fit is a one-to-one system, connected to either an air hander or furnace, whereas VRV Life has one outdoor unit that can be connected to several indoor units — air handlers, furnaces, and even ductless units,” he said. “The Daikin Fit and VRV Life systems have slim, very quiet, side discharge outdoor unit with inverter compressor technology — basically the same technology that’s used in ductless systems.”

Homeowners looking to replace their forced air HVAC equipment are likely not familiar with ducted mini-split systems, so contractors may want to spend a little time educating them about how the equipment works. Offering both ducted and ductless mini-split systems is a good idea, said North, as it empowers contractors with more options for solving their customers’ comfort challenges.

In addition to being more energy efficient and comfortable, ducted mini-splits modulate to maintain the space temperature, instead of kicking on and off to maintain set point, said Homenik. This increases the reliability of the system, as most compressor wear and tear comes from the system turning on and off. Ducted mini-split units, both indoor and outdoor, are also much quieter than traditional forced air systems, he said.

“Another reason why a contractor might choose to offer a ducted mini-split would be the far greater heating capacity that is achieved,” said Homenik. “Samsung’s Max Heat systems, for example, can provide 100% heating capacity down to 5°F and will operate down to -13°F. This may eliminate the need for backup heat and reduce the cost of the system.”

Mini-split options are also beneficial for contractors to offer to customers whose older homes weren’t built with air conditioning, or who have added a room to their existing home, or who just want supplemental conditioning, said Salvage. “Inverter systems and inverter technology also provide energy efficiency benefits due to their ability to run at only the speed necessary to maintain temperature. In addition, the inverter outdoor unit is much quieter and smaller than traditional systems, which frees up space for the homeowner.”

A ducted mini-split system is a great solution for the consumer who wants true zoning (by utilizing multiple air handlers), better comfort due to the dehumidification capabilities, low noise, flexibility, and room-by-room control, said Foster.

“Replacing traditional forced air systems with a ducted mini-split is an excellent application of the technology, even in the coldest of climates given its ability to add supplemental heat,” he said. “As for contractors, they have the design flexibility to tackle the most challenging applications by offering a simple one-to-one solution or utilizing multiple air handlers to provide comfort in each room.”

The design and installation process for ducted mini-splits and forced air systems is similar, said North. With either type of system, contractors should conduct a blower door test and perform load calculations to size the system accurately. Contractors should also evaluate preexisting ductwork for cleanliness, design, and age before reusing ducts for a new installation.

“The ducted mini-split’s variable-speed compressor will slow down and speed up to match loads, but contractors should still be mindful of the system’s range,” he said. “Each mini-split heat pump system has a minimum and maximum capacity published in the manufacturer’s technical documents. The mini-split can deliver significant energy efficiency during part-load conditions compared to a forced air system if the contractor sizes the system correctly.”

For a system to be sized properly, contractors must perform room-by-room load calculations and ensure that the duct design is accurate in order to provide the proper airflow, said Foster.

“Setting the proper static pressure on startup is also critical,” he said. “In addition, contractors must ensure that proper installation practices pertaining to piping, wiring, and charge are followed, along with use of the required tools to complete installation according to the manufacturer’s recommendations.”

While customers may be more familiar with forced air HVAC equipment, it may be smart for contractors to offer them a ducted mini-split option as well. In fact, some customers may already be aware of these systems, as consumers are becoming more educated about options that provide comfort in their living spaces at a lower operating cost, said Foster.

“Additionally, with the increasing cost to operate heating and cooling systems and the continued focus on electrification and the reduction of gas-operated systems, there will be increased interest in inverter-type solutions, such as ducted mini-split systems.”