This website requires certain cookies to work and uses other cookies to help you have the best experience. By visiting this website, certain cookies have already been set, which you may delete and block. By closing this message or continuing to use our site, you agree to the use of cookies. Visit our updated privacy and cookie policy to learn more.
Home » Electrification, Education Market Make Geothermal Heat Pumps More Than an Underground Sensation
NewsHVAC Residential MarketStandards & LegislationResidential Geothermal Heat Pumps

Death and taxes may be the two things no one can avoid, but thanks to federal legislation late last year, the geothermal industry can take at least a little of the sting out of the second one.

Professionals in the sector embrace last year’s renewal of a federal tax credit for geothermal projects, but less as an immediate game changer than as one piece of a greater picture of growth.

Joe Parsons, senior product manager for ClimateMaster Inc., described the credit’s extension as useful “especially in combination with other incentives and project financing.”

“Extensions are particularly helpful in the context of large-scale developments, where the time between planning and breaking dirt could be three years or more,” said Jeff Lawrence, director of commercial accounts for Enertech.

Costa sees the federal tax credit (FTC) extension as a positive indicator not only for geothermal (or ground source) heat pumps (GHPs) but “for other ‘green’ and highly efficient technologies” as well. He points to recent action on the state level as evidence of additional momentum.

“Examples are NYSERDA in New York as well as the large incentives for heat pumps offered by the government. The state of Connecticut is also considering an incentive starting in 2022.”

The industry may also take encouragement not only in what last year’s legislation said, but how it said it.

“The same legislation that extended the credits at last recognizes geothermal heat pumps by name,” said Parsons. He also noted the bill’s mention of the technology specifically as a renewable energy technology.

“As an individual who’s dedicated my current career to the adoption of GHPs, that’s a huge win.”

Of course, the tax incentives are not happening in a vacuum; they are part of a broader objective. Any list of trends affecting the industry will include decarbonization, which Parsons said is now enjoying some recognition federally after a few years of progressing almost exclusively on the state level. 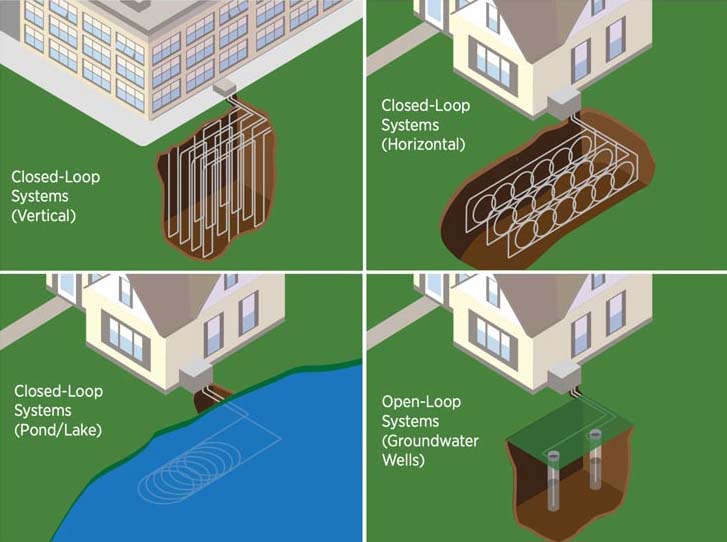 HARDLY BORING: Homeowners and facility owners have more than one more field design to consider. (Courtesy of U.S. Department of Energy)

Lawrence sees decarbonization as providing “huge benefits” for builders and building owners in both the commercial and residential sectors.

He attributes this appeal to due to “there being no outdoor unit, and with the potential to monetize a communal ground loop system. It’s a huge marketing piece for many large-scale residential developments, and electrification is a priority among the modern homebuyer.”

Costa also sees geothermal playing a more prominent role in renewable efforts as not only states but also municipalities and utilities increasingly encourage geothermal adoption for their own reasons.

Along those lines, Parsons outlined that geothermal community investment in ground loops by electric co-ops continues to rise, municipalities are considering community loops, and “development companies are factoring in geothermal heat pumps to achieve their net-zero community objectives” where other HVAC options may not meet criteria.

In some states, Costa said, “the ‘post-COVID’ demand is so high that drillers are in great shortage at the moment.”

That may sound like a negative to many, but Costa sees it as an opportunity for new drilling technologies to emerge.

While many geothermal heat pumps have done very well for two decades or more, Lawrence said the new customers of today are getting a “vastly improved product.” In particular, geothermal is following the trend in product connectivity within the home. He described today’s offerings as providing valuable data to the installer while also giving added transparency and peace of mind to homeowners.

Costa added that many systems are now installed with monitoring systems to optimize the geothermal bore field performance. He expects that feature to attract additional customers as prevalence grows.

Asked which side is doing well these days, Parsons reports growth in both. He does focus on residential products and markets, though, and sees a market getting more informed about potential carbon reductions.

“Geothermal in combination with other renewable solutions such as wind and solar provides a clear path to zero net energy homes,” he said. Which would not matter without the increased accompanying interest in investing in that kind of home.

Conversely, Lawrence works on the commercial side, and he chooses to put the current situation in pandemic context and accentuate the positive.

Fortunately, that was then, and this is getting better.

“Following a few tough quarters,” he said, “especially as folks return to the office, the commercial geothermal market can only go up.”

He sees opportunity in both sectors if those involved continue to evolve.

“Manufacturers and installers need to be flexible in both the applications and their product offerings,” he advised, adding that Enertech’s objective is controlled growth, allowing the company to avoid any sacrifice in the quality of the product.

Bosch Thermotechnology’s Costa sees single-home application as doing best on the residential side and said that has been the case for the last several years.

“We definitely continue to see schools to be the biggest driver in the commercial/institutional market,” he added.

That other ongoing trend should only accelerate given recent events. 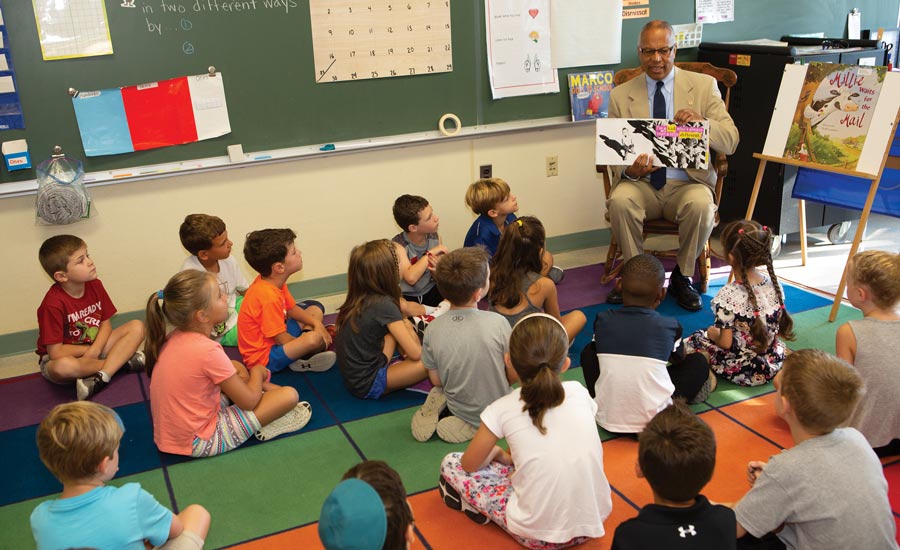 AN UNEXPECTED STORY: While geothermal fights for believers in some markets, it is a much more familiar part of comfort in K-12 applications. (Courtesy of Maryland govpics/flickr, cc by 2.0.)

COVID-related federal funding for schools to put toward upgrades (including HVAC) has begun rolling toward states and districts. One might be forgiven for recalling the “outsider” status geothermal works to get beyond in the U.S. and wonder why upgrade money would have much relevance.

Jeff Lawrence can connect the dots. A technology that is the new kid in many discussions actually enjoys legacy status more often in the K-12 realm.

“This is a fascinating segment to monitor,” Lawrence said. “In the late ’90s and early 2000s, there was a huge boom in retrofit and new construction geothermal applications for schools. Today, with the current administration prioritizing sustainable electrification, and the versatility and flexibility inherent to geothermal systems, water-source technologies will be a strong contender when these entities consider modernizing their HVAC solutions.”

To that end, while geothermal fights for adoption elsewhere, Enertech has developed a line of products “specifically designed for large-scale retrofit applications” such as school systems.

Parsons echoed that schools are an area where some GHPs are naturally approaching the end of their useful lives, and he adds that geothermal serves a larger share of government buildings, too.

“The replacement of 20-year-old products with even more efficient units,” he said, “on ground loops with 50- to 100-year life expectancies, illustrates the long-term savings of GHP technology.”

Circling back to K-12 funding specifics, Costa observed that “the ESSR grant program original package was already significant, and it is expected to be expanded upon.”

Costa expects schools to see the value not only in highly efficient geothermal systems but in the cash subsequently freed up to use for meeting other needs. He also connects the opportunity with schools’ basic mission.

“A geothermal system installed in a school is a great educational tool to develop a larger sense of sustainability in the community,” Costa said.

As years progress, commercial and residential geothermal adoption may only get easier as the decision makers themselves are products of more schools made comfortable through the technology.

What Do Contractors Get Wrong About Geothermal?

According to these professionals, there is more than one correct answer.

Asked to correct any misconception he sees, Enertech’s Jeff Lawrence offered a clarification.

“Any motivated HVAC contractor that currently works in refrigeration already knows how to work on a geothermal heat pump; they just don’t know it yet.”

He sees a stubborn but inaccurate perception that the technology is “exponentially harder” to install or that adding geothermal is more headache than it’s worth.

“That couldn’t be further from the truth,” said Lawrence, adding that it may be “high tech” but is also “alarmingly simple.”

He encouraged contractors interested in adding revenue to talk to a manufacturer or industry association like the International Ground Source Heat Pump Association.

“These groups have a wealth of contractor training opportunities at little or no cost to the installer,” Lawrence said. “A rising tide lifts all ships. We want everyone to be successful in their geothermal endeavors, and that starts with education.”

“I think there is still a big knowledge gap regarding geothermal, not only in regards to what it can do for the end user, but also its return on investment and available incentives and applicability.”

At ClimateMaster, Joe Parsons emphasized that the confluence of factors throughout this article have made it a “great time to be in the business of installing geothermal heat pumps,” aided further by the Geothermal For All awareness campaign.

“It’s not too late for HVAC contractors to get on board.”