This website requires certain cookies to work and uses other cookies to help you have the best experience. By visiting this website, certain cookies have already been set, which you may delete and block. By closing this message or continuing to use our site, you agree to the use of cookies. Visit our updated privacy and cookie policy to learn more.
Home » Why Changing Refrigerants May Mean Your Existing Pump Needs Replacing
NewsTechnicalComponents & AccessoriesRefrigerantsMotors & DrivesValves & Pumps

Why Changing Refrigerants May Mean Your Existing Pump Needs Replacing

With the ban on R-4040A, R-507A and other refrigerants taking effect in 2021, and further phasing out of over 20 regulated refrigerants, hydrofluorocarbon (HFC) use is set to be reduced by over 85% over coming years, with a switch to naturally occurring gasses that are non-ozone depleting being encouraged.

Reclaimed and re-processed refrigerant can be used until 2030 but is likely to become expensive and in short supply as when R-22 was phased out.

There have been legislation changes since the January 1, 2020, with virgin HFC refrigerants being banned from use. Although recycled refrigerants can continue to be used, which are ozone depleting, their price is expected to increase. There will also be stringent reporting requirements for leakages (as in section 608). With the possibility of heavy fines for infringement, which in 2020 were as much as $300,000 for one indictment, it remains questionable whether the benefits of reusing historic fluids outweigh the initial higher outlay of using environmentally friendly refrigerants and the range of process improvements utilizing such liquids can bring.

Natural refrigerants such as carbon dioxide, ammonia, and hydrocarbons including isobutane, propane and propene are offered as alternatives providing a range of benefits and process improvements.  These benefits include contributing less to global warming, conducting heat or cooling more efficiently and thus reducing the amount of work compressors are required to undertake, leading to a reduction in the running, repair, and replacement costs. 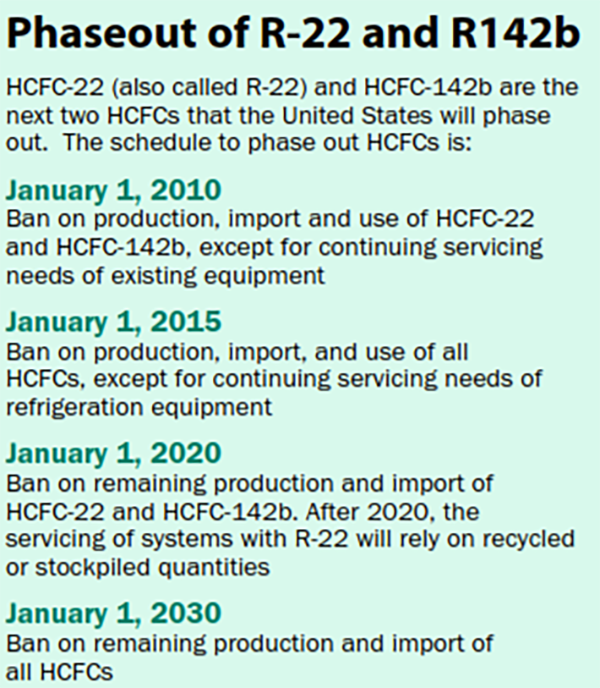 Natural refrigerants are set to lead the way in not only reducing total cost of ownership for cold room storage and HVAC projects, but also as a way for organizations to work towards meeting their carbon neutral goals and increase social responsibility.

With the use of natural refrigerants, and the range of pressures and temperatures used, the effects on pumps and process equipment can be quite severe if not researched prior to install.

Whether additional equipment will require retrofitting or upgrading is a decision each contractor will have to consider on a project basis, but what might a change in refrigerant mean for pumps used to offload, or circulate refrigerant in cooling applications?

Carbon Dioxide: This has a poor lubricity meaning increased pump wear is experienced. It requires very low temperatures and high pressures to remain in liquid form. It can create slippage within designs of pumps whereby its viscosity is so low it recirculates within the pump head, rather than being discharged from the system. If the incorrect pump design is selected it can lead to the liquid boiling (gassing off) or premature destruction of the pump due to cavitation.

Propane, isobutane, propene, and propylene – Similarly, these have a low NPSH requirement, with risk of cavitation but with the increased risk of being flammable, meaning newly installed equipment should be ATEX, and their use can be prohibited in particular areas.

It is not only pumps which need to checked but also variable speed drives (VSD’s), which may need adjusting according to newly designed equipment and fluids density, specific gravity, and other properties to ensure pumps operate as desired maximizing life expectancy.

Various design enhancements are available for pumps to reduce total cost of ownership, improve speed of maintenance, and reduce risk to process and personnel. Pump features to consider for your process when upgrading pumps include:

When changing the refrigerant used within your pumping application, it is always worth discussing the application with a process specialist to evaluate whether the existing pump setup also requires replacement. Pablo Martinez-Moore is the Commercial & Marketing Director at North Ridge Pumps Ltd. Being involved in the Pump Industry for over 10 years, he has become specialist in a range of pumping applications handling fluids ranging from Seawater, Oils and Sludge, to Resin, Paints and Chemicals. For more information visit www.northridgepumps.com