How Would a Minimum Wage Increase Affect HVAC Contractors?

Some believe an increase would lead to higher prices, while others believe the industry could weather it

The prospect of the federal government increasing the minimum wage to $15/hour briefly took national attention while Congress was hashing out details of the COVID-19 relief bill. While the legislature worked to decide what would constitute the bill, the Senate voted on a minimum wage increase amendment to the bill. The bill failed in the Senate, with 42 votes for and 58 votes against (50 Republicans and 8 Democrats).

While this attempt at an increase failed, there is the potential that this will be brought up again at the federal level in the future. Some states — California, Illinois, and Massachusetts — are already on track to increase their own minimum wages to $15/hour.

How might a mandatory minimum wage increase affect HVAC contractors?

Scott Merritt, owner of Fire & Ice Heating & Air Conditioning, believes that wages will need to increase in the industry, leading to prices for the end user going up as well. People who are being paid below $15 will have their wages increased, and Merritt said that it is likely that employees being paid only slightly more than $15 will expect a similar increase, lest they feel that they are only being paid a tiny bit more than the legally required wage. 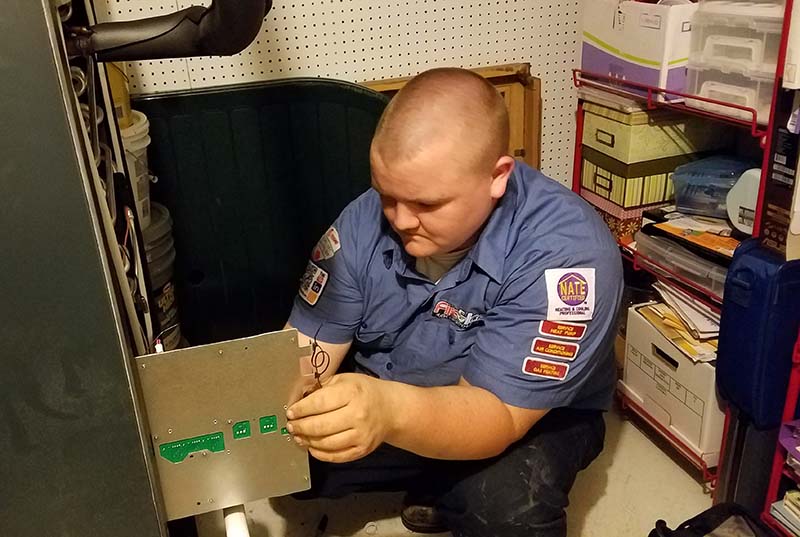 CUSTOMERS AND PRICE INCREASES: Contractors’ ability to recruit skilled labor and keep customers satisfied with workable prices will come down to their skill in pricing products and services effectively. (Courtesy of Fire & Ice Heating & Air Conditioning)

“If the price increase is going to be gradual, then the whole process will happen, but much slower and much more digestible,” Merritt said.

Louis Fuentes, president of Air Conditioning Guys Inc., said that most HVAC technicians are paid far enough above minimum wage that a mandated increase would not affect them. However, he said that pricing may need to increase slightly to cover the cost of employees not making that much money, which may take the form of entry-level positions that are focused on reception or data entry.

“It’s like when the supply houses increase equipment costs every year because of ‘freight, copper demand, shipping costs, gasoline/diesel’ etc.,” he said. “The end user will ultimately bear the burden of the increase.”

However, he said that costs may not need to be raised as high as expected. An eight-hour job at a helper rate of $15 only raises the cost for the end user by $46, if the same person was earning $12/hour beforehand. And contractors might already want to pay a premium on getting good office talent, as a skilled receptionist can take a significant burden off of the owner, while an unskilled one can cause the opposite.

According to him, contractors should treat a wage increase like an increase in supply/equipment costs, and they should look at staffing levels and adjust immediately if a wage increase goes into effect. The increase could have a benefit, though, as employees making more money could increase their job satisfaction along with their morale, as well as enhance their commitment to the contractor. Even if a minimum wage increase does not occur anytime soon, contractors can offer employees opportunities to earn more through programs such as profit sharing, performance-based pay, sales commissions, and milestone bonuses.

Price increases could affect differently-sized companies in different ways as well. Merritt believes that smaller companies will get the shorter end of the stick, since a large amount of sales can come from being able to beat larger companies on price.

Pete Danielson, vice president of market development at Service Nation Inc., said that since most jobs in the HVAC industry are near or above the $15/hour mark, contractors do not need to fret over an increase. The labor shortage already exists, which has led companies to offer competitive wages to obtain quality employees.

“If a new minimum wage rate is going to impact a contractor (i.e., raise their overhead or direct costs), they must adjust their pricing to account for the increase,” he said. “But if all contractors are in the same boat, raising prices will not put them at a competitive disadvantage.”

Perhaps an increase could even lead to new sales. Butch Welsch, Welsch Heating & Cooling in St. Louis, wondered if a minimum wage increase could push people who live in apartments into their own homes, meaning more customers for contractors. It would not be a huge number, but could be a hidden benefit of the increase. A hidden cost could include a marginal increase to gas prices, but because of the salaries given to most technicians (exceeding minimum wage), he isn’t concerned about the effect a mandated higher minimum wage would have on the industry.

“I personally do not see any negative to at all, as far as our industry is concerned,” said Welsch. “We're so far above the minimum wage that I don't believe there's many contractors in the country that are close to $15 an hour. People may have one or two helpers or a handyman, but increasing them to $15 is not going to seriously affect your business.”

Welsch also doesn’t see the increase making it harder to recruit people. In his opinion, a large number of people who stay in minimum wage jobs are not seeking a career in the heating and air conditioning industry. Because of the salaries and type of work that an HVAC job involves, minimum wage jobs and contractors are pulling from two different pools of jobseekers and overlapping little in competition for them. This is further amplified by the fact that working in the HVAC industry requires a level of skill, whether that’s attained from a trade school, learned on the job, or through an apprenticeship program.

“The labor shortage, in my opinion, is due to other factors,” said Fuentes. “For example, a growing trend is that there are fewer and fewer entries into the trades by younger generations. Millennials are not that attracted to working in the trades. Add to this that the older generations are starting to retire, and you get a formula that leaves a shortage of labor for future growth in the trades. New labor is not keeping pace with demand for training and the next generation.”

According to him, the contractors ability to recruit skilled labor and keep customers satisfied with workable prices will come down to their skill in pricing products and services effectively, as well as their local market.