Contractors share the good, the bad, and the leaky from a January worth remembering

Texas and adjacent states felt the brunt of an unusually severe winter storm in January, but the real pain for residents and businesses developed from widespread power outages that created heating and plumbing crises during and after the storm.

“Normally, we have few failures in our area,” said Lee Rosenberg, P.E., chairman of Rosenberg Indoor Comfort. “This was a nightmare.”

In one sense, that spelled opportunity for HVAC contractors, but contractors had their own problems. Their stories evolved as a result of how badly the storm hit them, what preparations they had made, and how they adjusted along the way.

Ask Rosenberg how his San Antonio-based company’s operations went during the storm, and he can bottom line it very quickly.

His area faced circumstances as difficult as any. Many of the streets and roads were closed. As with much of the general population, that didn’t matter for some staff because they didn’t know how to drive in ice and snow anyway. Other team members were dealing with their own losses of power and/or water.

The Rosenberg Indoor Comfort office lost power and closed. Then, when the office was unoccupied, the storm dealt its worst blow. 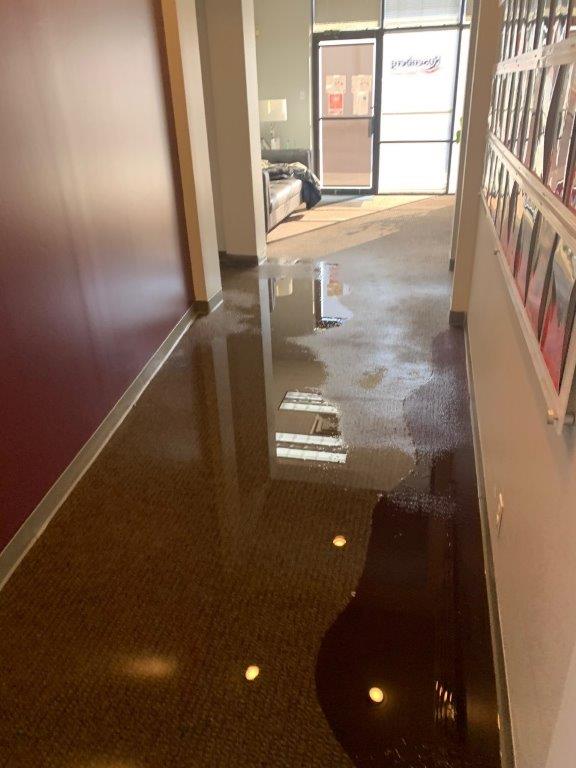 “Sometime after noon on Jan. 17, we had a water leak feeding an exterior hose bib in a wall, which cause substantial flooding throughout our offices. We did not discover the leak until Friday morning, the 19th,” recalled Rosenberg, whose team continues to work on reconstruction.

About four and a half hours north, contractors in the Dallas-Fort Worth area had it a little less bad.

“We started calls a little later than normal. We did halt calls after 7 p.m.,” said Dustin Neff, general manager of Triple A Air Conditioning & Heating in Flower Mount, Texas. Those modifications served Neff’s goal of getting his crew home safely while helping as many families as possible.

Likewise, Daffan Mechanical kept running service calls since the roads were not entirely impassable, said owner Tom Peregrino. His company, located southwest of Fort Worth in Granbury, did pause installations for a few days to keep its larger vans off the road.

Safety as a priority also led Daffan to roll out a special service for its own.

“We picked up and dropped off all our office staff in 4x4 trucks for their peace of mind,” Peregrino said.

Contractors may have faced snow and ice on the streets, but as the storm hit and then passed, they were left with waves of phone calls from customers and would-be customers — and decisions about how to manage them.

“The volume of calls shot up over 200% from what is considered normal for us,” Neff said. Triple A used a couple of factors to prioritize once it was running at full capacity.

“If the customer was in our Energy Savings Club, they were moved to first available time slots,” he recounted. “Luckily, less than 5% of the calls coming in were customers from our ESC program.”

Neff noted that customers who had maintenance performed prior to the storm did not see the same issues as those who did not have their systems serviced recently.

“We then prioritized the systems that only had one system, or if they were elderly or had young children,” Neff said. Multiple-system homes came after that.

“We all worked many hard, long days to get help to as many families as we could,” he concluded.

Rosenberg Indoor Comfort also prioritized its maintenance agreement customers. They could answer phones and emails remotely but likewise could not do much about it for a few days. Frustrating for any contractor, Rosenberg recounted that “we had many, many inquiries from potentially new customers” that they could not serve.

Daffan’s Peregrino recalled that the storm’s weekend timing did not help. On-call techs were quickly swamped, as were the couple of additional techs who volunteered to pitch in.

“By the time the weekend was over, our after-hours dispatcher had a log 31 pages long of customers we had seen or who still needed to be seen. It was madness!”

When staff started sorting out the rest on Monday morning, they found that many were asking how to best operate their heat pumps, with special interest in the “emergency heat” function.

“That lead us to quickly send out Facebook posts and emails educating our customers on how to operate their heat pumps,” Peregrino explained.

By the end of Monday, the backlog was pushing into that Friday’s schedule. Still, Peregrino felt fortunate to be running all of his techs. Customers who had no heat pump output but had electric heat were moved down the queue. Daffan prioritized “no electric heat” and then “no gas heat” calls, and those two groups composed the bulk of their calls.

Customers Warming Up To Additional Business?

With so many residents having to go into a sort of survival mode quite uncommon for modern times, contractors might expect a few homeowners to develop new perspectives about their own systems.

“For some customers, they expressed interest in having a generator in the future,” Peregrino reported. In other cases, storm-related system problems prompted some customers to move on to HVAC replacements.

And once technicians could actually reach these systems, what did they tend to see?

“Most of the repairs we performed during the winter storm were issues we would have found during routine maintenance,” said Triple A’s Neff. “Weak or cracked ignitors played a big role in failures. Dirty flame sensors and cracked pressure switch hoses also cause many problems.”

Neff estimates around 90% of the issues would have been caught in a routine maintenance visit. He hopes this event will encourage homeowners to schedule visits twice a year, spring and fall, to keep systems in better shape for the occasional unusual event.

The worst is over this time, allowing some time to review disaster plans. For Rosenberg, they will maintain the ability to operate remotely if needed.

“We will, however, install a system to detect a major water leak within our office,” Rosenberg said.

In Flower Mound, Triple A also had a company-wide plan of attack. Neff confirmed that the office staff could work from home, and they dispatched techs straight from their homes, among other tactics.

That minimized one type of risk for the process-driven company, but Neff said Triple A found itself cutting it close in another area: inventory.

“What we were prepared for was supply shops being closed of not having materials for restocking,” said Neff. “We were lucky we had enough stock in our shop. But if the storm would have lasted another week, we would have gotten incredibly low on supplies.”

At Daffan Mechanical, the leadership team sent out guidelines and an action plan in advance, outlining how the company would adjust depending on how circumstances evolved.

Daffan’s disaster plan goes as far as securing a remote office location with all necessary infrastructure to operate. However, this storm’s power outage fallout poked a hole in that strategy.

“Since this storm caused rolling blackouts,” Peregrino said, “even our remote location would have been insufficient. We are looking to revise our emergency plan.”

With no particular utility improvement on the horizon and more winter storms to come sooner or later, contractors in Texas and elsewhere might take the next sunny day as an invitation to consider the next storm now.

While debate continues over why Texas experienced such a massive power failure, Eddie Glidewell — owner of Comfort Crew Cooling and Heating in San Marcos, Texas — has some personal insight. Before starting his HVAC firm, he spent some time working for Austin Energy. If someone wants to understand what happened in Texas this winter, he said, they need to look at the state’s summers.

A severe cold snap has struck Texas three time in the past few years, but winters in Texas are usually not this bad. Summers, however, are often brutally hot, with temperatures topping 90 degrees for months. Glidewell said the power companies need to ensure they can meet the state’s demand for air conditioning during this time.

It’s a common practice for the electricity providers to shut down plants for maintenance during the winter. As a result, there just wasn’t enough power available to meet the surge in demand when temperatures dropped. Because Texas operates its own electric grid, it wasn’t able to draw power from other states.

Even as the storm has passed, there are impacts on HVAC contractors along with everyone else. ServiceTitan is coordinating volunteer assistance and relief efforts with service professionals around the country to help contractors in Texas and other states hit by the winter storm.

“The dedicated professionals in Texas and surrounding states have been working tirelessly to respond to this urgent situation, which unfortunately is likely to continue for several weeks,” said Ara Mahdessian, co-founder and CEO of ServiceTitan.

Another impact of the winter storm is higher fuel prices. These are hitting drivers across the country. Gas prices reached $2.67 by Feb. 25, according to AAA. In Texas, gas prices rose an average of 15 cents a gallon after the storm, reaching $2.40. HVAC contractors are especially affected due to the need to gas up their fleets of work vehicles.

“The cost of fuel will definitely drive our pricing to a new level,” said Kelvin Rogers, owner of Aire Serv of Fort Worth and Aire Serv of Weatherford, two HVAC franchises from Neighborly. “While we hope this is temporary, it’s unfortunately inevitable.”