This website requires certain cookies to work and uses other cookies to help you have the best experience. By visiting this website, certain cookies have already been set, which you may delete and block. By closing this message or continuing to use our site, you agree to the use of cookies. Visit our updated privacy and cookie policy to learn more.
Home » Are Schools HVAC’S New Hotspot for Opportunity?
NewsHVAC Light Commercial MarketIndoor Air QualityCoronavirus Coverage

Data says yes — if schools can muster the funding

HVAC systems in public schools are getting old and breaking down across America.

That was the conclusion of a June 2020 report to Congress by the U.S. Government Accountability Office (GAO) about the state of U.S. public school facilities.

According to the study, about half — 54 percent — of public school districts need to update or replace at least two different building systems or features in their schools.

“Further,” the study stated, “we estimate about a quarter of districts (26 percent) need to update or replace at least six systems in many of their schools.”

When it comes to which systems are in most dire need of repair, HVAC was at the top of the list. An estimated 41 percent of districts need to update or replace HVAC systems in at least half of their schools, representing about 36,000 schools nationwide.

Although facilities’ funding priorities remain safety and technology, an increased focus on the indoor environment due to the coronavirus pandemic could shift the situation toward IAQ. That would mean more work for HVAC contractors — at least, those in areas where school boards have the dollars and the political will to make IAQ investments.

The State of American School Buildings

There are nearly 100,000 K-12 public schools nationwide. GAO’s survey, covering 50 states and the District of Columbia, was administered from August-October 2019 and was intended to be nationally representative of schools in each area. It included on-site visits to 55 schools in six states.

Of the 55 schools, officials reported that 28 had HVAC issues, such as older systems that frequently malfunctioned or leaked, causing damage to flooring or ceiling tiles. Some of the examples cited were extreme. 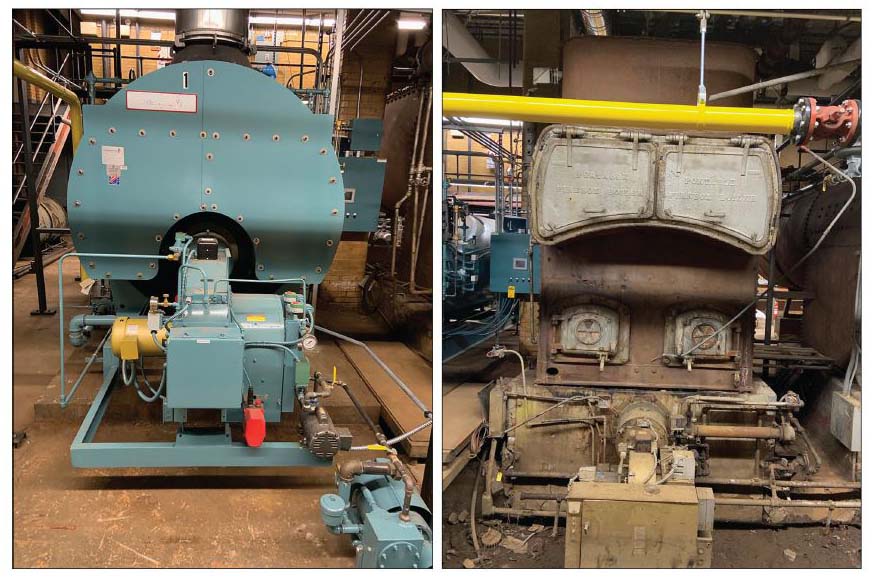 Public school in Rhode Island with one new boiler (left) and one original to 1931 building. Source: GAO

“One school we visited in Rhode Island had parts or components of their operating HVAC systems that were nearly 100 years old,” the study stated. “In Michigan, we visited one school that district officials said used an original boiler from the 1920s to heat the building.”

Aging systems — even those less than a century old — are costly and labor-intensive to maintain. For example, one district in New Mexico had to spend $150,000 to replace an eight-year-old boiler that should have lasted 20 years because of damage from hard water. District officials said they wanted to purchase filtration and water softening systems to address the issue, but the district couldn’t afford it. 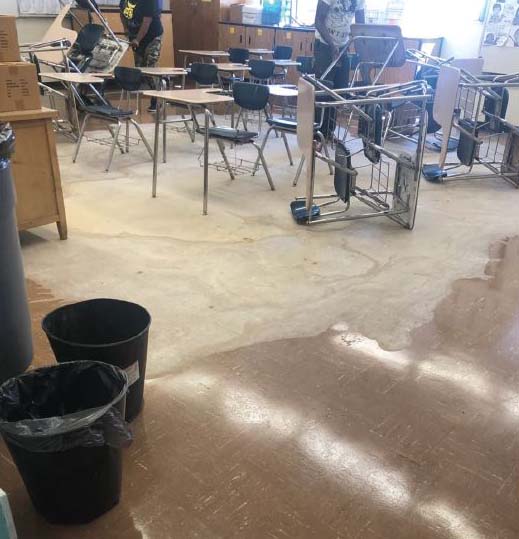 Water damage from HVAC leak in a California school, whose officials said replacing flooring is difficult because of asbestos floor tiles.

Many states reduced or eliminated funding for school facilities during the Great Recession and in subsequent years, contributing to an increase in deferred maintenance. Now, putting off upgrades or needed repairs has left America’s school districts facing big bills. In a Maryland school district, some schools were retrofitted with a/c, but the pipes and insulation serving these systems were not updated accordingly, which has caused moisture and condensation problems. Though officials were concerned about IAQ and mold problems, fixing these issues could cost over $1 million for each building.

Put simply, lack of cooling can lead to lack of schooling.

“Officials in several school districts we visited said there are serious consequences to not maintaining or updating HVAC systems, including lost educational time due to school closings and the potential for mold and air quality issues,” the study noted. A Michigan district reported that about 60 percent of their schools do not have air conditioning, which led to workarounds like temporarily adjusting school schedules, opening windows, and turning on fans, although district officials said those measures were not always effective at cooling buildings to safe temperatures.

“Some districts we visited had criteria for closing school due to heat,” the study reported. “For example, one district’s policy stated it would consider early dismissal for schools without air conditioning when the temperature in the majority of classrooms is 85 degrees or higher, or when the outside heat index reaches 100 degrees by 10:30 a.m.”

Looking beyond HVAC, the study estimated that about a quarter of districts need to update or replace other building systems — including interior lighting, roofing, safety and security systems, or plumbing — in at least half their schools. 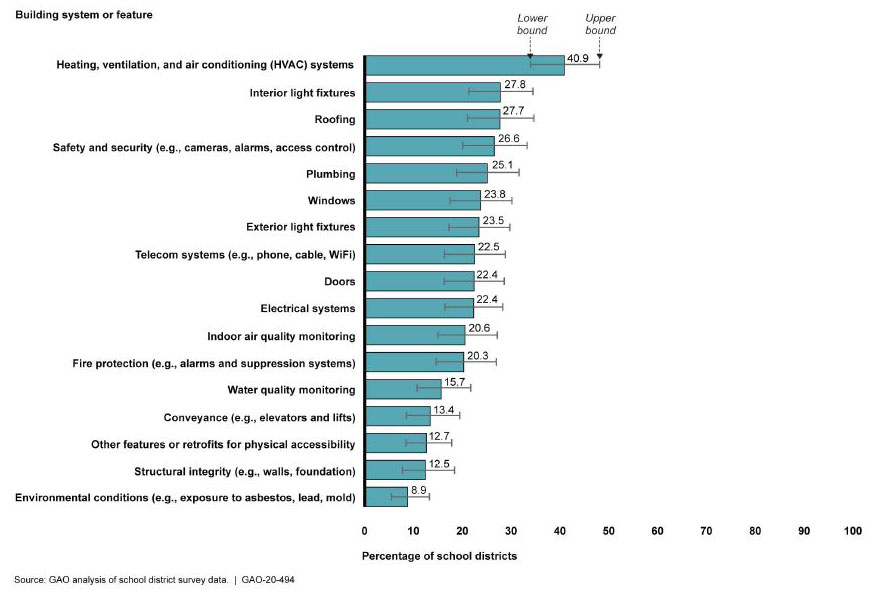 How did U.S. school facilities get to this point? Some lack funds to do the work, and those that can afford it often have other funding priorities.

Based on the survey, 55 percent of districts use local funding as their primary source for school facilities: property tax revenue, grants, and bonds. (Thirty-six percent rely on state funds and 1 percent on federal funds.) This means many decisions are being made either by local school boards, whose election depends on spending tax dollars the way their constituents want, or at the ballot box.

And what do the people want? Hint: Just like the homeowner who wants marble countertops instead of high-end heat, it’s highly noticeable projects, not HVAC upgrades. School districts’ highest priorities for their facilities were improving security (92 percent), expanding student access to technology (87 percent), and monitoring health hazards (78 percent) — with some districts prioritizing security updates over replacing building systems such as HVAC.

Facilities assessments tend to be done as part of master plans or before seeking bonds or other local funding, in order to show local voters the level of need. 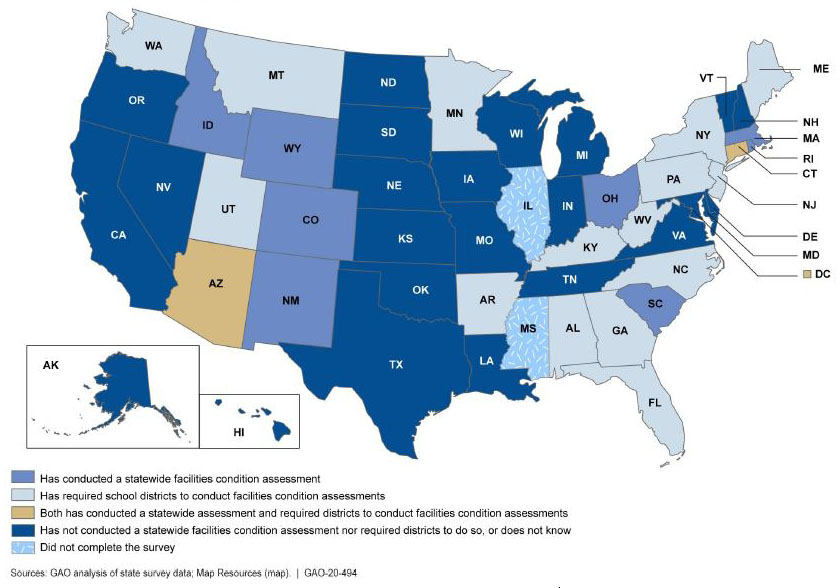 Paying qualified teachers, of course, is integral to a successful school — yet teacher salaries, too, compete with facilities in a district’s limited budget. At some point, the cost of repair versus replacement comes into play. In one high-poverty district GAO visited, a funding partnership provided $1 billion, enough to renovate about 25 schools. But the district has $5 billion in unmet needs, and its 2012 facilities condition assessment recommended total replacement of 50 schools.

A few states do have other funding models. In an unusual example, New Mexico ranks schools on certain criteria and then funds work via state money, starting at the bottom of the list.

Randi Weingarten, president of the American Federation of Teachers, said that as opposed to renovating old schools, new facilities can be built in a way that create space for support systems and new opportunities — think health care services and robotics rooms.

“At this point, when you have the kind of GAO report that was presented — when you have big boiler problems, big HVAC problems, it would really be good to replace these with new schools that not only have those new internal systems, but also have the ability … to meet the individual needs of the kids,” she said during a June briefing on reopening America’s schools to the House Committee on Labor and Education. “The short answer is, we have to marry the public health tools that reduce the transmission of a virus in school, in order for parents and teachers and kids to feel confident that they could walk into a school and not get sick.” In the longer term, she said, upgrades will involve “wraparound services,” including health and wellness.