Contractors Discuss How to Handle Tool Policies With Technicians

Balancing costs for company, quality of instruments, and contentment of employees

Summer cooling season is in full gear, which means that both technicians and their tools are being kept extremely busy. Tools in poor shape will need to be replaced before they break, and tools that are in use will need to be treated well to ensure they don’t break on the job. Plus, new hires will want to know which tools they will have to purchase and which tools the company will provide. Here is how a few HVAC contractors handle tool policies for their technicians.

Offering Tools and Bonuses for Technicians

Paul Sammataro, president of Samm’s Heating & Air Conditioning in Plano, Texas, supplies some tools and offers a bonus to help technicians cover some of their own tools. He explained that his company offers a “tool bank” for their technicians. This begins with $125 that the technician gets from the company to spend on their own tools.

“Hopefully that gets them into the mode of buying tools,” Sammataro said. After this, the technicians will get another chunk of money, usually around $500 to spend on tools. Any money spent from this chunk will come out of a discretionary bonus given at the end of the year. He explained that at his company, most employees will end up with a bonus of at least $500 or more by the end of the year. 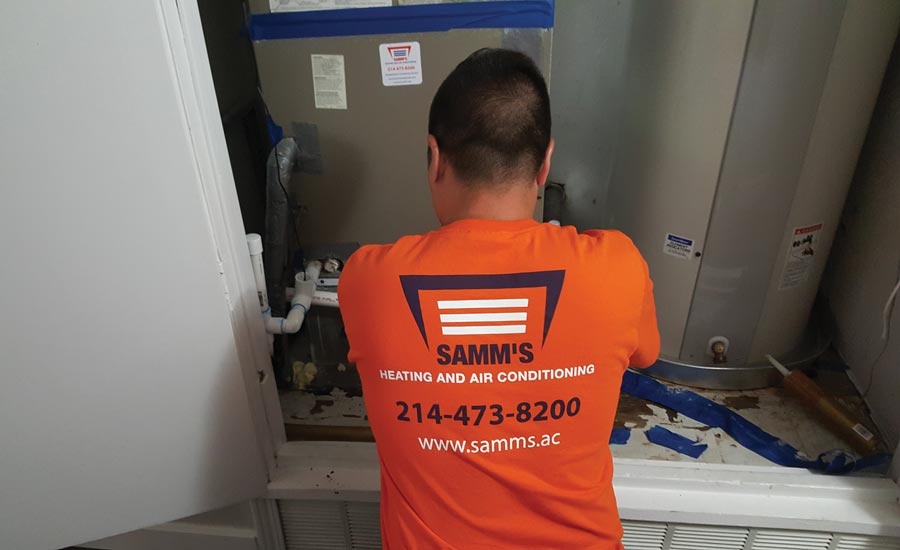 GOOD EQUIPMENT: Sammataro said that his company used to supply recovery machines, torch kits, and other equipment, but decided to change their policy to improve how employees treated the tools.

“Having said that, we supply the recovery machine, all gas tank refills on torch kits, jackhammer, balometer, duct leak tester, coil jack, duct blaster, staging, safety glasses ladders — we provide all of that,” he said. “The technicians have to provide the vacuum pump, the torch kits, any leak detectors, manometers, and basic hand tools.”

“What happens is you get employees that may or may not care about it because it’s not theirs,” Sammataro said. Plus, if equipment breaks, it becomes very challenging to track down where/why the damage to the tools occurred. He said his company will also likely be instituting a new tool sign-out policy to better track the tools the company owns. In the past, a technician might grab a tool, and if they didn’t bring it back to the office, it was hard to track down where the missing tool had gone.

“We’re going to try to make it a little more seamless when people are pulling company-provided tools out of here,” he said.

His company also used to have a policy where Samm’s Heating and Air would pay up to $250 worth of tools in specified months. For example, the technicians had the whole month of December to buy any tools needed. However, in other months where the payment wasn’t granted, technicians would try to survive without the tool until the time came when the company-purchasing policy came into effect. They decided to change to their current year-round tool bank model.

“It’s allowing them to have the right tools that we want them to have when they break or are lost,” he said. “And it’s given them more freedom to keep the money in their pocket.”

He also said that the current tool policy encourages accountability. Beforehand, when the pumps were owned by the company, technicians very rarely changed the oil in the pump, threatening burnouts. But when the pump is owned by the employee and the oil provided by the company, Sammataro said he is refilling oil constantly, since technicians don’t want their own equipment to get damaged.

“If they lend their equipment out, they’re going to worry about who they lent it to,” he said.

Matthew Smith, managing officer at Smith Heating & Air Conditioning in Stockton, California, said that his company requires technicians to provide their own personal and hand tools, and that it is the company’s responsibility to provide power tools. He explained that his company is unique in that it is a part of a collective bargaining agreement. The company has a clear list of the tools that employees need to purchase themselves. Because of this well-stated policy crafted through the collective bargaining agreement, Smith said his company has not had grievances or issues surrounding the tool policy.

“Throughout the years, I did notice that employees were not replacing broken or lost tools like they should,” Smith said. “And I was finding out that it was actually affecting their ability to do their work on some projects.”

To combat this, the company addressed it through meetings, but also offered a $200 annual allowance to technicians to cover the purchase of technicians’ tools.

“That eliminates the excuse of ‘My electronic meter broke, and I just haven’t had time or I didn’t want to spend the money to fix it,’” Smith said. “It was probably the best investment we ever made.”

Smith also said contractors should listen to technicians about which types and brands of tools to purchase for them, as well as giving them freedom to buy the brands they want for personal use.

“The one thing you want to be careful of as an employer is that you don’t want to dictate what you think are the best or proper tools for your technicians,” he said. “Technicians are pretty good as far as their personal preferences for their own individual hand tools and things like that. And technicians normally are thorough as far as making sure that they have the proper equipment.”

Especially when the employer is buying the equipment, the temptation can be to cut quality in favor of cost, but Smith said this is not a good decision. This can make technicians feel as if their company isn’t supporting them enough through providing quality tools. Smith Heating & Air Conditioning will often ask during team meetings whether any employee has special tool needs.

Smith said that some people might think his company is crazy for giving an additional $200 after already establishing the list of tools that technicians must provide themselves.

“We definitely have a labor shortage,” he said. “And the worst mistake you can make is not keeping your technicians happy and satisfied with what they’re doing. Because they will go somewhere else where they’re better treated, and get the support and help that they need to be successful. That’s why I call it an investment and not an expense.”

Glenn Harrison, service technician with a HVACR contractor in the Chicago area, said that the company he works for provides most of the power tools, some specialty or rarely used tools, recovery machines, and vacuum pumps. The employees provide the hand tools, standard meters, basic power tools, and torches. 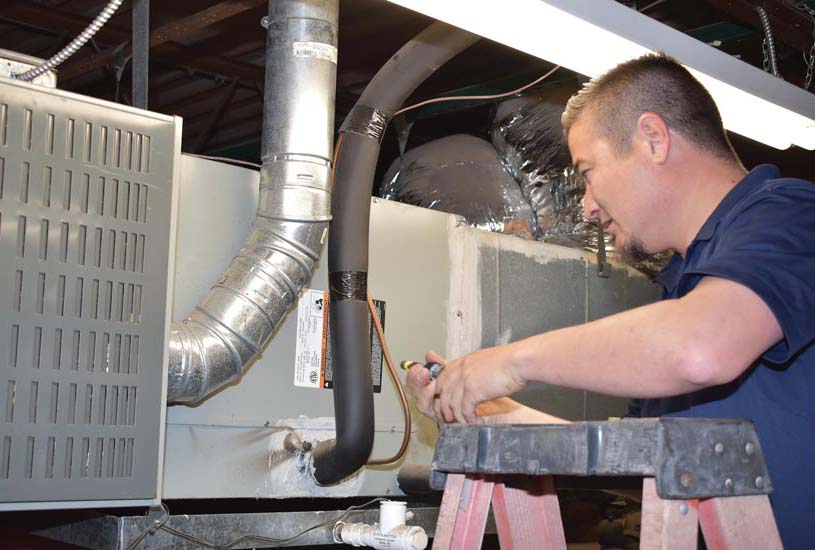 TREATING TOOLS WELL: Glenn Harrison, service tech at AA Service Co., said that technicians who buy their own tools will treat them with more respect and purchase the brand/features they want.

“One benefit they do have is a tool account, where the employees earn tax-free money from SPIFs, from maintenance agreements and sales leads to the sales department, and for getting positive reviews of their performance from customers,” Harrison said. He said that his current employer’s policy feels the most fair for everyone involved.

At a previous company he worked at, Harrison was given almost no tools at all, which he said very few employees would be okay with unless they were compensated very well. At another company, the company provided everything except basic hand tools, but the tools were only given out on an as-needed basis.

“They kept tools for a very long time, and this resulted in tools and equipment that didn’t work right or failed on the job,” he said.

He explained that there are pros and cons to every policy. Employer-bought tools can be beneficial when tools are too expensive or maintenance is too frequent, but it can lead to mistreated and improperly maintained tools. Likewise, technicians who buy their own tools will treat them with more respect and purchase the brand/features they want, but it will cost the employee some money.