As summer inches closer to the HVAC contractor, long hours, a multitude of customers, and significant profit margins await. When an air conditioner goes out in the heat of summer, homeowners will want fast relief. And even if the workload does not allow contractors to fix the system until a few days later, contractors say portable technology can mean the difference between a satisfied customer and an unsatisfied one.

Greg Crumpton, vice president of Critical Facilities and Technology at Service Logic, reflected on the use of portable technology during the COVID-19 pandemic. On his local news, he saw a story discussing the establishment of drive-through coronavirus testing in southern Florida. But he noticed something: The drive-through stations seemed to lack air conditioning and dehumidification. And he saw a link to other, similar applications. 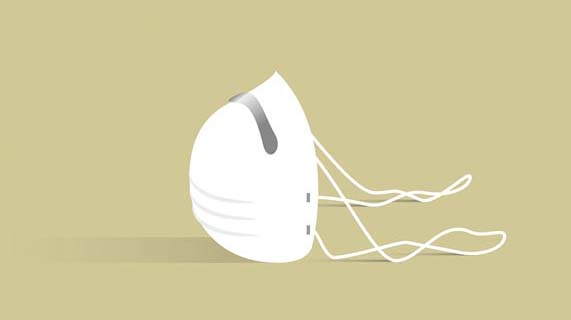 CRISIS CONTROL: Regardless of the nature of a crisis or natural disaster, Greg Crumpton of Service Logic suggested that portable cooling may have a place in offering relief.

“This could be a great market for portable cooling,” he said. “Like you would have at a concert venue or have at a trade show, with canopies and tents, and the air conditioning ducted in and out of the tent.

“I don’t know that we’ve ever thought about crisis management and the requirements for air conditioning or dehumidification,” he added.

Crumpton, a member of the Carolina Contingency Planning Association, is familiar with practices for ensuring business continuity when a disaster strikes, especially regarding the data center world. He encouraged contractors to form service-level agreements with companies, where the contractor would be the go-to source for portable equipment rentals in the midst of a catastrophe. Contractors could even potentially form contracts with governments to ensure proper service for critical locations in a catastrophe, such as medical facilities or elderly communities.

Crumpton said that incorporating portable technology into one’s repertoire requires some training, but not much.

“If it’s a portable unit, if it’s something mounted on a broadcast trailer, if it’s something in an MRI facility, anything outside that normal realm, I will usually personally go to the factory and get tuned up on it myself,” he said. “And then I become a trainer for our company.” After this, he will give tutorials to others for properly using the equipment. Rather than focusing on the nuances of each brand technicians may come across, he focuses on what they have in common.

“Once I explained the functionality versus the nuances of the product, it really goes well, and we have great success,” he said.

Todd Melton, replacement foreman for Welsch Heating and Cooling, said that his company keeps several portable coolers on hand to keep customers cool when waiting for the installation or service of a main air conditioning unit. He said that some companies are reluctant to buy portable technology, since it tends to sit in a warehouse for eight or nine months a year, only making an appearance in the summer rush. 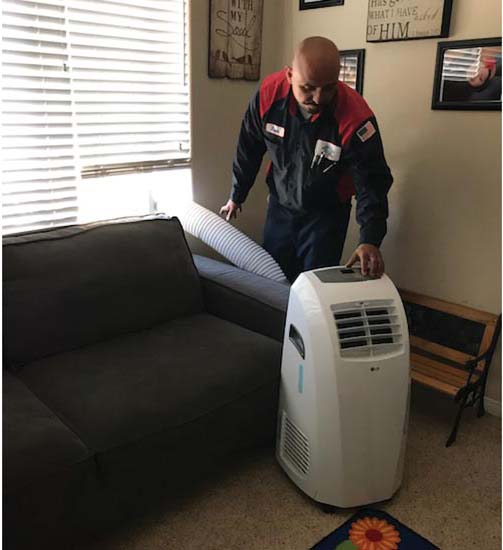 OUT THE WINDOW: Installing a portable cooling device indoors frequently requires finding a window the customer is comfortable venting the exhaust heat from.

“But after a while, you get to thinking about the amount of customers that will call in to tell us how much they appreciate that we went that extra mile to go get those units put them in their house and make sure they’re capable of surviving and not having to go to a hotel,” he said.

Melton added that his company has had very little issue with the equipment after purchasing it. He explained that the products are designed to be pulled around on a trailer or rolled around a house, so they are made to last.

In addition to this, he talked about a few unique times when his company successfully used portable cooling for large-scale area air conditioning. On one occasion, his company used a large number of portable coolers to cool an area of around 2,500 square feet in the middle of an unconditioned warehouse. The cooled area was used for children to practice a play, and it was only insulated by a single tarp. The coolers kept the warehouse between 80°F and 85°F when the outdoor temperature exceeded 100°F for several days.

“Until last year, portable cooling was not something most contractors were offering. Increasingly, portable technology is becoming less of an extra service to set a company apart and more of a needed service to keep up with the pack.”
— R.J. Allen
Owner American Dream Services

R.J. Allen, owner of American Dream Services Heating and Cooling, said that his company uses portable technology as an extra service to its customers.

“We don’t rent them out,” he said. “We don’t charge a fee for them. We choose to provide an extra service that sometimes our competitors can’t supply.”

“A lot of times, that’s where the profitability comes from,” he said. “You get the referrals because a lot of customers love it. They appreciate it.” He also added that if a potential customer is comparing his company with another, the offer of temporary portable cooling could be enough to tip the customer over the edge and close the sale with him, instead of the competitor.

Allen said that deciding the best location to place a portable cooler can be difficult, since it requires a window for venting. Some customers want a particular room cooled or are uncomfortable leaving certain windows (like the front window) ajar. He also said that keeping all of the components, like hoses, together can be a challenge. If one gets left behind accidentally, a technician will need to return to get it.

Allen advised a checklist for technicians to run through to ensure nothing is left behind. If shipment of equipment for the main system is unexpectedly delayed, technicians may need to make a late-night run to deliver a portable cooling solution to a customer to keep them comfortable. However, Allen said these are generally small obstacles, and the benefit of offering portable cooling outweighs them.

Allen explained that until last year, portable cooling was not something most contractors were offering, so the technology helped to set his company apart. Now, though, he is beginning to see a lot more companies incorporate the technology into their offerings. Increasingly, he said, portable technology is becoming less of an extra service and more of a needed service to keep up with the rest of the pack.