Portable air conditioning units have come a long way in their 35-year history. Since it first hit the market in 1983, portable a/c has gained legitimacy as both a quick fix when the power goes out in the summer to a permanent solution in situations where a normal a/c unit might not do the trick. Designed to be movable, spot coolers, as they’re often called, have been spotted in a wide array of interesting applications: sporting events, outdoor concerts, air hangars, greenhouses, and even emergency situations — like dehydrating mausoleums after Hurricane Katrina.

Despite these opportunities, many contractors and consumers still rely on portable a/c as primarily a quick fix — albeit one that leads to both short- and long-term use. From temporary relief for seniors or those with medical conditions while the air’s being fixed, to more permanent uses like dehumidifying an ammo room or the ever-increasing need to cool servers and IT equipment, portable a/c continues to evolve to meet the changing versions of the age-old quest: comfort on demand, for as long as it’s required. 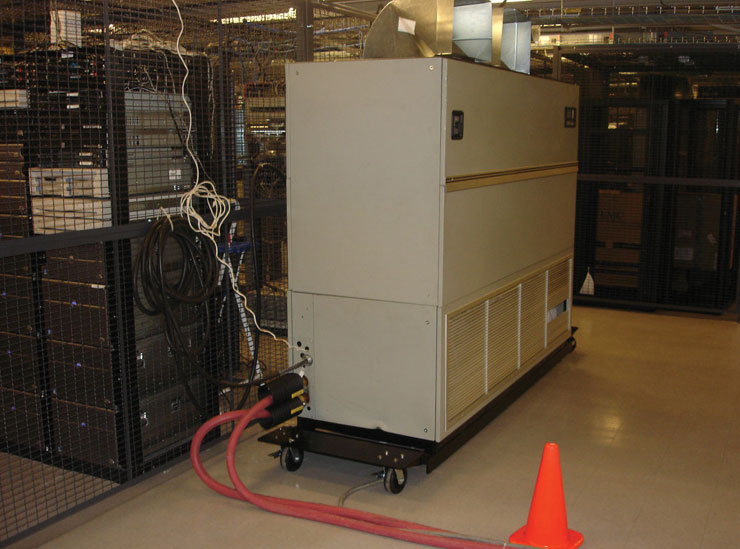 “Typically, I have used these units for temporary or emergency situations,” he said. “In my history, it has been when their existing permanent unit has been out of service and for treating hot spots within a data center.”

For his business, Crumpton uses Denso MovinCool units, which he rents from a local company. It’s a personal preference, he said.

“They keep sufficient fleets available or are a few hours away from another distribution point — therefore, availability has never been an issue,” said Crumpton. “In this arrangement, they handle all maintenance, inventory management, etc. I do not like to own what may be rented on an as-needed basis.”

While Crumpton sees more requests for portable a/c in reaction to an issue rather than as part of a strategy planned in advance, he does have several clients who have purchased portable units to have on hand in case of an outage.

“It saves time, versus having to dispatch a rental, setup from scratch, etc.,” he said. “Once you do it in their space, you know how to build an SOP to support it in the future.”

Making portable a/c part of an infrastructure solution is something Crumpton recommends because it’s easier to address problems ahead of time than in a true emergency situation.

“Setup is typically fairly easy and quick,” he said. “The most difficult issue I have dealt with is having enough power available (ampacity) to handle a unit that is large enough to produce enough cooling to be effective. Under a true emergency situation, you usually have to be creative for connectivity: power, air/heat rejection, condensate removal, etc. A sharp knowledge of the building’s electrical infrastructure or teaming with the building’s preferred electrical contractor has proven successful.

“If you have a partnership established with your client, you may be able to work toward infrastructure connections that allow an easy deployment before catastrophe strikes,” Crumpton continued. “Sit with your clients who are truly mission critical and work on a contingency plan. They can do some capital budgeting around the offering, and you as a partner can do some simulations — training and drills — to ensure you and your crew are ready to deploy upon a crisis.”

RJ Allen, owner of American Dream Services in Bakersfield, California, keeps a couple of 1-ton portable a/c units on hand as a perk for customers if it’s looking like a job might take a few days to complete.

“Let’s say we install an air conditioner … the system’s under warranty, and we have to order that part, and it’s going to take a few days to get,” he said. “Or if they are buying a new system and have to wait for the install.”

The company started out by providing portable units for customers with a maintenance plan and for warranty customers.

“We also said if it’s for a senior citizen, someone who’s pregnant or has medical issues … well, they can’t be without air conditioning, either. It gets to the point where if we have it available and [the units] are sitting here, and someone calls us and says ‘Hey, our system’s down’ and they have us fix it, we will generally bring it out to just about anybody.”

“Sit with your clients who are truly mission critical and work on a contingency plan. They can do some capital budgeting around the offering, and you as a partner can do some simulations.”

Allen doesn’t advertise the service, but he doesn’t charge for it, either.

“It’s all a courtesy,” he explained.

Demand generally spikes once temperatures get into the high 90s.

“When it gets over 96°F, they start asking, ‘Is there anything you can do for us?’” he said. “Say they have a bad variable-speed motor. It takes two to three days to get in — they’re usually pretty upset. We tell them ‘We can bring in this portable a/c for you.’ So at least they have one room in their home that’s actually comfortable. We get a lot of compliments on that.”

Allen keeps three 1-ton portable units on hand, which the company owns. They’re pretty small: just enough to handle one room, he said. But, in the summer, all of them are usually in use.

For contractors who need to get a portable air conditioner installed as quickly as possible, Allen said it’s helpful to use checklists: one for checking the unit out to customers and recording who had it last, one for showing customers how to use it, and one for additional parts.

“What happens a lot of times is, if a technician installs it really fast and doesn’t show them [the customer] how to use it, it will just stop working if the condensation gets plugged up,” he said. “You have to teach them how to clear out the drain line and dump the water out. And sometimes, they’re in a hurry to grab that equipment really quickly and get going, and they end up forgetting the hose or the remote and having to go back.”

As more and more businesses take their data digital, portable air conditioners have found increasing use as a long-term solution, particularly in buildings constructed decades before heat generated by computers, servers, and other IT equipment was ever a consideration. 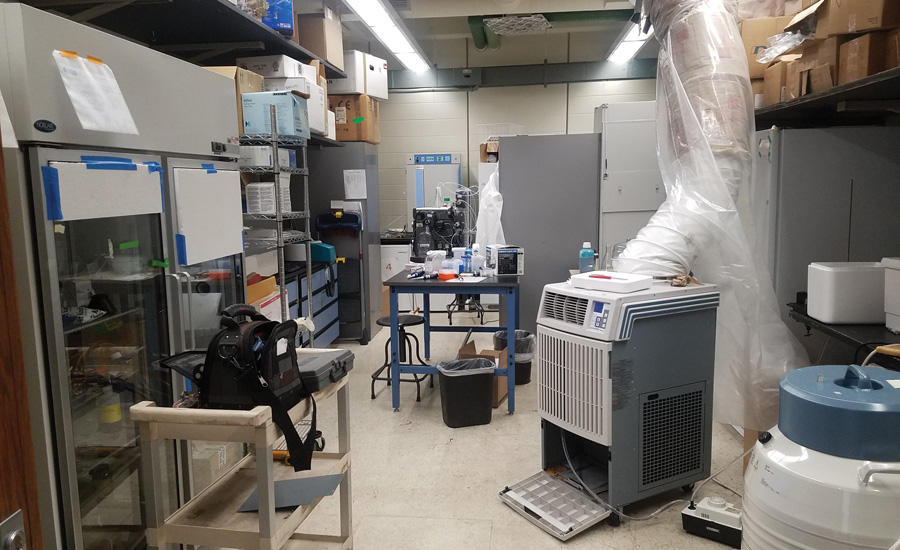 PACKING HEAT: Heat is the enemy of IT equipment, and a room packed with heat-generating lab equipment — like this one, which Lloyd Brombach, stationary engineer, Wayne State University, Detroit, came across recently — can overwhelm the building system if not properly cooled.

Lloyd Brombach is a stationary engineer at Wayne State University in Detroit, where portable a/c units are used all across the 90-building university campus — including to cool lab equipment and servers installed in spaces that were never meant to handle those loads.

“In one case that comes to mind, one of our historically designated buildings is occupied and used for very modern reasons,” he said. “We are tasked with preserving the original structure as much as possible, which means avoiding drilling holes to run piping and ductwork.”

Typically, that can be circumvented by using window units for cooling — except in the case of one particular closet, which has been turned into a server room. It gets hot in there. Since drilling is a no-no, a portable unit was the next best solution. Brombach used a Tripp-Lite unit, partly because it was on hand and partly because it had a discharge hose that he could aim directly at the server rack.

“In this case, we had a small window that would not accommodate a window-shaker but would accommodate a hose from a single-pipe air exchange portable,” he said. “It was a pretty simple matter to plug into 110 power and have the campus carpenter build a sleeve for the window to attach the hose.”

The portable cooling unit that services the server closet is one of about 30 to 50 total on-site units.

Most are in use, although a handful are kept in reserve for urgent situations.

“We own the vast majority but have rented on occasion when we didn’t have anything on hand that would satisfy the situation,” Brombach said.

When properly used, portable a/c units are a viable solution as both temporary and permanent fixes, he concluded.

“They are easier to set up than anything permanent and can be up and running in minutes,” he said. “And the ability to choose whether you are going to cool with air or water is a nice flexibility.”