While residential HVAC contractors enjoy “essential service” status during the COVID-19 pandemic, commercial HVAC contractors grapple with mandated construction shutdowns in many parts of the country. The extent of the shutdowns vary by state, with some suspending most work in all locations and others leaving the decision up to local municipalities. Those places that allow construction to continue are developing new rules as they go along.

“It really very much depends on what day you’re asking and what state or city you’re in,” said Ken Simonson, chief economist for Associated General Contractors of America.

Massachusetts offers an example of the issues facing commercial HVAC contractors. Boston, a booming market just a few months ago, suspended all construction projects indefinitely in March. However, work continues in the suburbs. Or it did until the middle of April, when the state’s largest construction union staged a walk off to protest safety conditions. Even as the labor issue nears a conclusion, many township residents want local construction halted. Meanwhile, Martha’s Vineyard officials are considering lifting their construction suspension to start work on the summer homes crucial to the island’s economy.

In states with more extensive construction bans, the ability of commercial HVAC contractors to continue working on a project depends on its classification as essential. In New York, this includes infrastructure projects (including schools), hospitals, and affordable housing. The state recently loosened its restrictions to allow work on businesses allowed to remain open during the lockdown, including stores and hotels. Christopher Stone, president of Hyde-Stone Mechanical Contractors Inc. in upstate New York, said work in the region has continued for his firm, although there have been complications along the way. 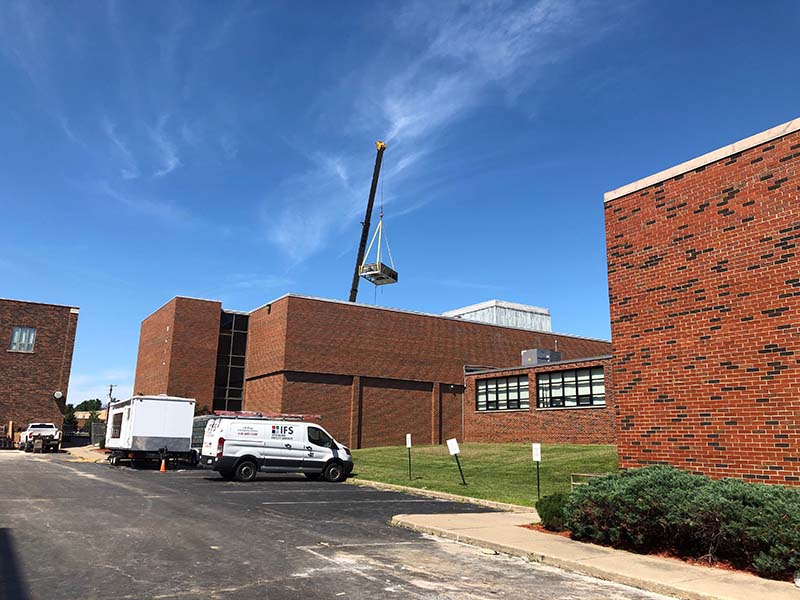 KEEP WORKING: Projects continue to move forward depending on location and segment. Many schools, considered infrastructure, have accelerated their plans.

“Every day is a struggle to figure out what job is going to get shut down, where we need manpower, do we have all the proper PPE on sites, do we have the material,” Stone said. “It’s a constant work in progress every day. And by every day, I mean several times a day.”

A few projects had to shut down until they could provide a COVID-19 plan. Stone said they feel they did a good job of making it as detailed as possible to ensure employee safety. Hyde-Stone provided as much personal protection equipment as the short supply allows. The firm ordered more face masks, including N95s, but these have yet to arrive.

Hyde-Stone stocks a plentiful supply of hand sanitizer, thanks to a local distillery that switched from producing spirits to this much-needed item. Stone bought three five-gallon jugs of the stuff, handed out to job sites, fab shops, warehouses, and employees at home. In general, construction workers are eager to be working, Simonson said. At the same time, there are some workers who are concerned about the safety at their sites.

Some Opportunities Open Up For HVAC Contractors

Hyde-Stone saw some healthcare projects open up in the last month. The firm has experience in this area and is willing to take on the work. One local hospital needed to add four isolation rooms. The original contractor backed out of the job over exposure concerns. Stone’s staff was willing to do it.

“The guys took all the proper precautions, and we told all the guys that if they weren’t comfortable, we wouldn’t send them in to the front line,” Stone said.

Healthcare work proves no boon, however. Healthcare systems are busier than ever and need more space to treat COVID-19 patients, but many face considerable financial stress. Elective surgeries provide a major source of revenue, and these procedures are either being put off by patients or banned by state governments. Stone had one healthcare group cancel a project after it laid off 30 percent of its staff and was losing money.

Stone does expect some school projects to move ahead early. Work on schools usually faces a tight timeline, as it requires completion in the few months the buildings go unoccupied. With no staff or students present, some schools are using the time for this type of work. That has been the case of Integrated Facility Services in St. Louis. The firm saw several projects pulled forward and is currently working on those.

Even school projects that are underway aren’t guaranteed to continue, though. Districts facing financial uncertainty announced they will delay some construction projects, including HVAC upgrades. Many school districts rely on sales tax revenue for funding, and this dried up during the lockdown.

Many projects still underway are limiting when trades can work or where. For some high-rise projects, trades are being limited to one floor at a time, Simonson said. Stone said this creates new challenges. He directed staff to come up with plans to pre-fabricate as much as possible to work around the limit.

“On a commercial site, all the trades have got to work together,” Stone said.

Some of the precautions will likely stay in place after the outbreak.

“There’s definitely going to be a level of cleanliness that we’ve never seen before,” Stone said.

Winners And Losers In Future Of Construction

The overall future for construction projects remains uncertain. In the near future, an outbreak at a job site remain possible even with precautions, Simonson said. Key workers may be missing from the site because of exposure either at work or elsewhere. Other disruptions, such as a family exposure, can also remove them from the site. 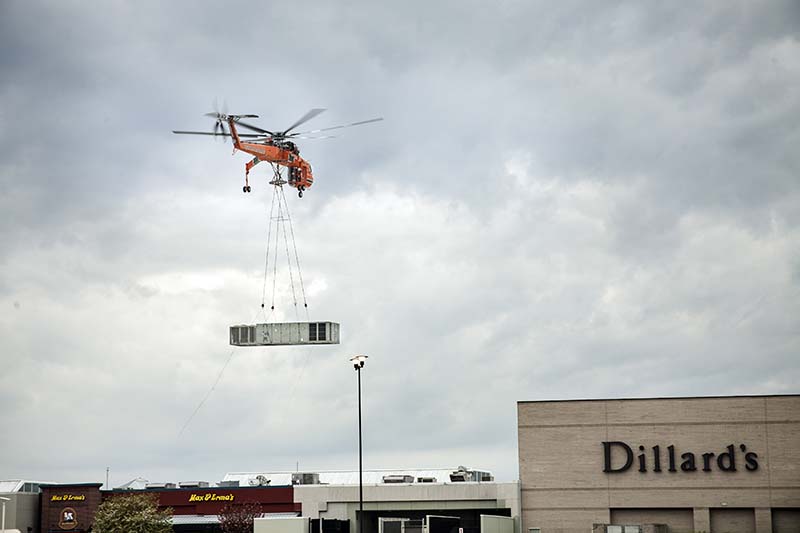 UNCERTAIN FUTURE: Big projects for restaurants and retailers will be hard to come by for a while.

Many kinds of building construction are going to be delayed even without restrictions, Simonson said. Data from a range of sources, from the National Association of Home Builders to the Airport Consultants Council, predicts a major slowdown in new projects. Simonson said most types of construction will be slower to come back than other industries.

“If this continues for more than another month or two, we will see a slowdown in the amount of work to bid,” said Kurt Voss, IFS’ vice president of engineering.

Retail and restaurant projects will dwindle as those industries face a major restructuring. The federal government tried to help boost construction in these industries by fixing the tax code, a long-sought solution, but the fix arrived too late, Simonson said 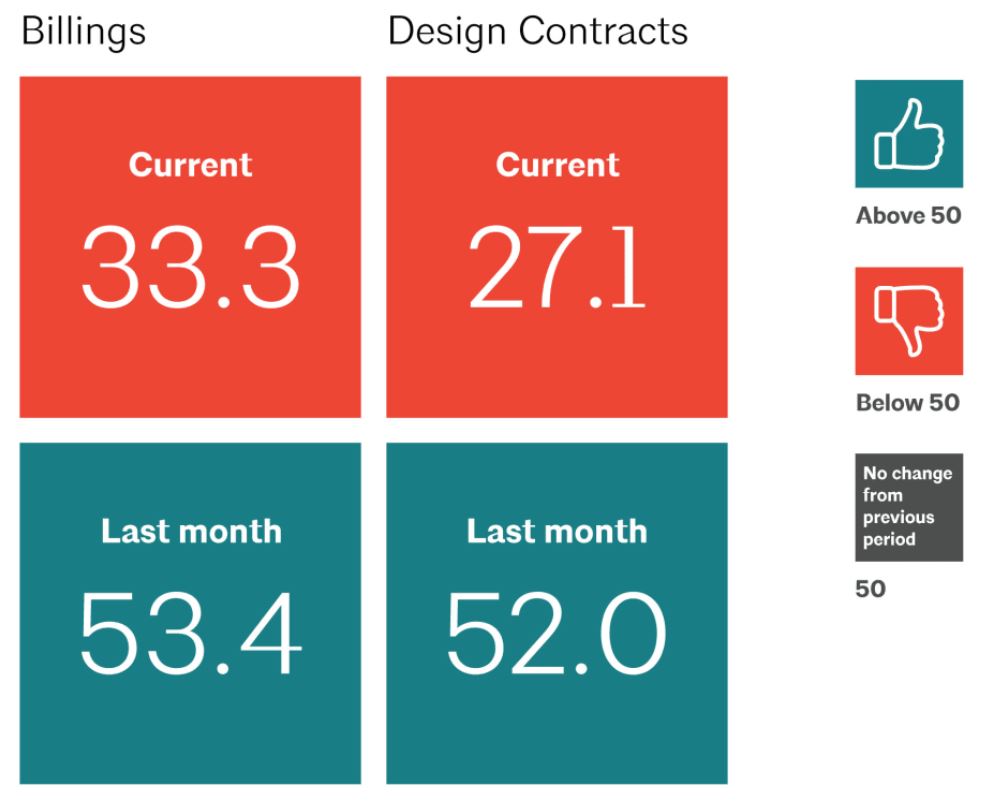 UNLUCKY NUMBERS: The Architecture Billings Index from the American Institute of Architects shows a decline in future work is likely.

There will be winners along with losers. Simonson expects a spike in work for fulfilment warehouses and data centers. That might prove good news for HVAC contractors, as temperature control plays a vital role for both.

Behavior changes will drive some change as well. The need for office buildings lessens if more people work from home. But don’t expect a boom in new home construction, even with mortgage rates at historic lows. Simonson said individuals will be less able to buy houses because they lack the assets or steady income to make a purchase.

Stone said his firm is scheduled to have more work than ever before. He is currently moving around employees to avoid layoffs and plans on calling back workers they laid off before the outbreak, during a planned lull in projects.

KEYWORDS: construction and HVAC economy and HVAC health and HVACR