Spring has sprung and the ground is thawing. The pains from snow and ice removal, however, still linger for residential and commercial customers alike. Now is a good time to talk to customers about a new snowmelt system for their home or business. Marketing a snow and ice melt (SIM) system means two things for contractors. The first is knowledge to sell the systems, and the second is the know-how to install them properly. SIM opportunities are endless, and to help, here are a few tips from professionals who are already successful at installing snowmelt systems.

Installing SIM systems is a service to customers large and small. The areas covered can be as small as the steps out of a house and as large as entire outdoor shopping plazas in snowy regions of the country. The reasons for choosing SIM systems are as diverse as the customers. The staff at Haley Mechanical in Dexter, Michigan, has been taking on significant hydronic SIM projects over the last three to four years.

“We want people to be able to safely navigate their driveways so they can not only enjoy winter, but they can also get to their destinations safely,” said Henry Haley, owner of Haley Mechanical. “The one big thing that we found this last winter, when we started doing marketing for snowmelt systems, was that there's a lot of interest in driveway safety. Snowmelt has become much more of a need base than it is a luxury.” 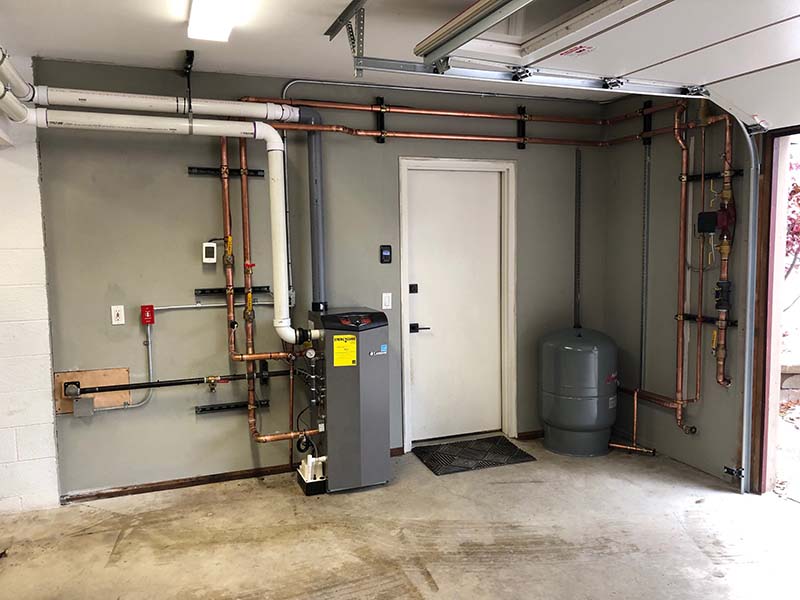 NOT ABOUT THE MONEY: “We want people to be able to safely navigate their driveways so they can not only enjoy winter, but they can also get to their destinations safely,” said Henry Haley, owner of Haley Mechanical. “Snowmelt has become much more of a need base than it is a luxury.”

He explained about an elderly gentleman who contacted them after being trapped in his home much of last winter because he was unable to navigate the driveway safely. Without a garage, it was often near impossible to get to his car for work without significant risk to his wellbeing.

“It is scenarios like these that snowmelt systems can significantly impact,” said Haley. “We were aggressive with pricing to make sure this project would get done for this gentleman this summer.”

In a Coffee with Caleffi™ webinar — What to Know for Melting Snow Hydronic SIM Best Practices — put on by Caleffi Hydronic Solutions, Max Rohr broke down reasons to install snowmelt systems and showed attendees that safety over convenience is becoming a key consideration for both residential and commercial customers.

“It’s not about saving money,” said Rohr, the REHAU Academy manager in Leesburg, Virginia. “If that is the No. 1 driver, then your customer is not going to be satisfied.”

Outside of safety, he explained that reduced liability is becoming a primary driver for SIM systems.

“Not only are retail and critical operations benefitting from continuous snow removal, but they are also reaping the benefits from a reduction in ice mitigation salt or chemicals usage that can be tough on the roads, inside buildings, and potentially the environment,” he said. “Add to that the quiet operation due to no plow sounds and backup indicators, and the reasons to sell snowmelt systems to many customers continues to grow.”

"Anywhere that it snows is a good location for a snowmelt system,” said Kolyn Marshall, system design engineer, Watts Radiant. “Try to find where the benefits are for the customers. It will depend on the application. A lot of insurance companies are offering discounts if a company installs a snowmelt system because it is a preventive solution to mitigate the risk.”

Managing expectations and designing systems correctly will be the two items that help contractors produce successful SIM systems and satisfied customers. Taking money saving off the table as a reason for these systems, contractors and designers must next ask what the customer hopes to gain by a snowmelt installation.

"One thing to keep in mind is that there is no absolute design for snowmelt,” said Marshall. “Any snowmelt system is an art and an act of best guess. The reason for this is that it never snows the same way twice. We can go through and design our system for 12 inches of snowfall and it gets 6 inches — or next time, we could have a really bad winter and we could have 18 inches. There is no way to predict absolutely what a winter is going to do.” 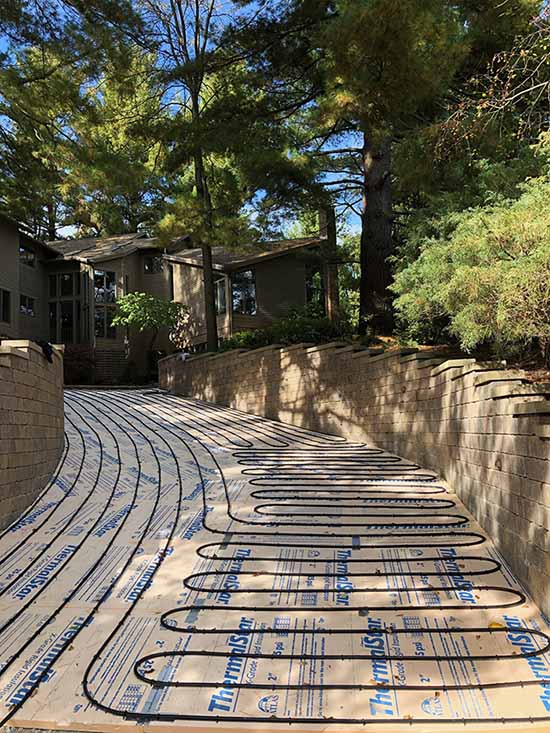 TO INSULATE OR NOT TO INSULATE: Insulation selection depends on the intended operation and location of the system. It is important that the insulation doesn’t compress and can withstand the pressure of the load.

To mitigate for these unknowns, contractors need to consider allowable snow accumulation, insulation, drainage, and controls.

Allowable snow accumulation is defined by the snow free area ratio denoted as Ar. According to the Radiant Panel Association (RPA), the ratio ranges between zero and one, with one meaning that there is no accumulation during snowfall. The bottom of the scale — zero — indicates that the surface may be completely covered by snow and melted later.

“The higher the Ar number, the higher capacity system you will need to operate correctly,” said Rohr. “Be careful when promising area free ratio; 100 percent is not always likely.”

To help achieve the chosen snow free ratio, many contractors will make insulation a part of their installation process.

"There are varied reasons to insulate and not to insulate a system, and all of them are valid,” said Marshall. “It depends on what your goal is of the system. If you talk to 10 different people, you are going to get 10 different answers, and they will all be right."

He explained that insulation selection depends on the intended operation and location of the system. It is important that the insulation doesn’t compress and can withstand the pressure of the load. According to Marshall, under-slab insulation is recommended if the water table is high or the depth to bedrock is low — but under-slab insulation may also result in frost formation. 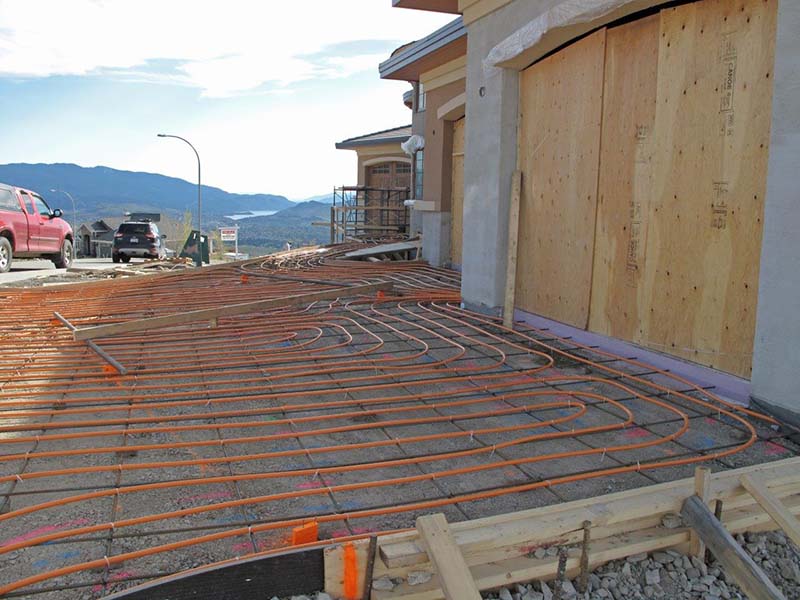 BEFORE THE CONCRETE: Proper drainage is another mechanical consideration that could make or break a proper snowmelt installation. For those installed with piping that is too deep or uneven, there is significant risk of partial melt and then refreeze.

Proper drainage is another mechanical consideration that could make or break a proper snowmelt installation. For those installed with piping that is too deep or uneven, there is significant risk of partial melt and then refreeze. Standing water is also likely to refreeze once the system is turned off.

“Liquid on the surface of the slab must be drained or evaporated,” said Rohr. “Best practices is to slope the slab towards a trench drain to prevent pooling. Installers should also consider heating the trench drain with PEX loops as well.” 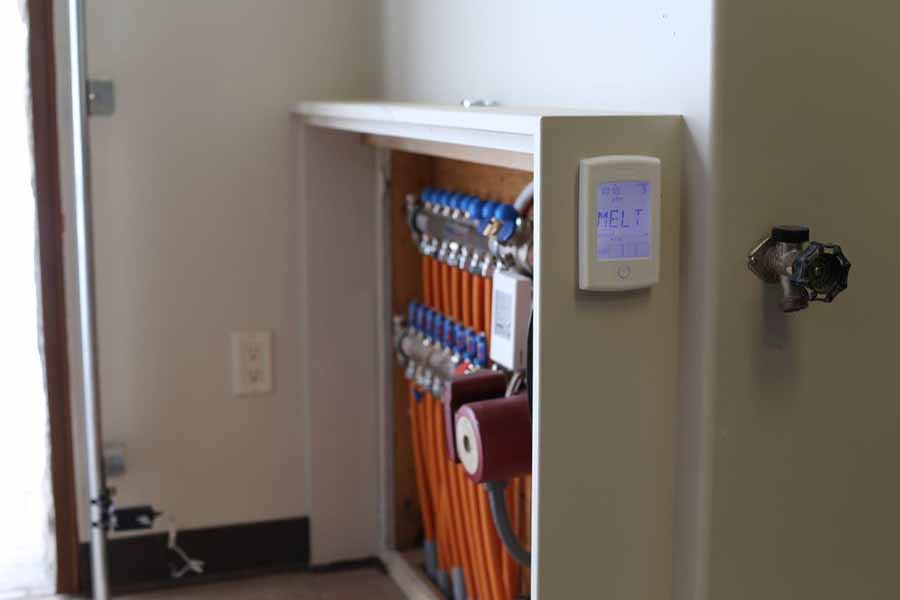 Controls also help dictate the success of a snowmelt installation. According to Marshall, the different kinds of controls available include standalone, those that tie in to BACnet and MODBUS, apps that tie into the system, and sensors mounted both in the slab and on poles near the snowmelt surface. With the use of controls, operations options include automatic start and automatic stop, automatic start and timed stop, and a manual on/off system.

The manual on/off system is not recommended, due to a customer’s ability to forget the system and let it run for days and months on end. Rohr explained that this often ends with a large bill and a very unhappy customer. He said that the minimum control that contractors should consider would be a manual on with a timer off function. The best, however, is automatic start and stop based on properly placed sensors, he said.