The company continues to expand line, save users money

Based in Westbury, New York, Spectronics Corp. is a 60-year-old company with a new generation of Made in the USA refrigerant leak detection dye — AR-GLO® 5. The product follows a 15-year run of AR-GLO® 4. The dye was introduced to the Spectroline® brand of leak detection kits to ensure all leaks can be found quickly. The product has a resistance to extreme temperature ranges and moisture, resulting in a longer shelf life and greater stability. It is co-solvent free and manufactured using OEM-grade materials. It is engineered to remain in the system indefinitely for ongoing leak detection. Three injection styles are available.

Those at the booth not only saw the large display of the new product and its logo, but they were also able to see the product in action as a special display revealed a streak of leaking fluorescence.

Another new product for the company is its Glo Seal™ offering that combines the UV dye and CoolSeal™ sealant into one application. The dye locates all leaks first and then begins sealing micro-leaks from the inside for continuous leak detection and ongoing sealing. 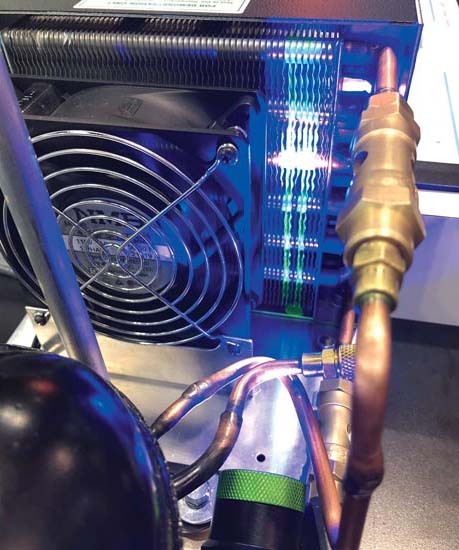 SEE FOR YOURSELF: At the booth, attendees could see the product in action as a special display revealed a streak of leaking fluorescence.

According to Matthew Cowley, North American sales account manager, Spectronics, one of the largest advantages with the company’s line of products is the injection system.

“When you choose Spectronics, you are buying into an injection system that you reuse over and over again,” he said. “This helps save cost to both the contractor and the homeowner.”

He further explained that instead of receiving the injection system with each dye, sealant, or acid scavenger purchased, those using Spectronics products would only be purchasing the actual chemical. It also saves contractors from throwing out and wasting all that hardware, said Cowley.

“We’re also one of the only ones that actually makes all this product themselves in Westbury,” said Cowley. “We haven’t acquired other companies so that we aren’t in the position of not knowing what actual chemicals are in those cartridges. We know without a doubt that we have the right chemical in our cartridges to get the job done — correctly and safely.”

Looking ahead, the company is working on some new additives for the injection systems. The goal is to provide HVAC contractors with a wider range to work with in the future.

Eight Simple Strategies for Surviving This Summer of Shortages