Product demonstrations and friendly competition keep everyone busy at the Expo

There was a lot to see at the DiversiTech® Corp. booth this year, and the large space invited attendees to walk through the booth and take a tour of the company’s offerings. From an aluminum line of unit hangers to an assortment of electrical connectors with a quick reference sheet, every employee in attendance was there to help attendees do their best job.

First stop on the booth tour was the Swoosh Drain Gun Big Shot demonstration. Lightweight and portable, the product is designed to blow out drains instantly, clearing the lines from any debris, dirt, algae, and other substances that can lead to clogging. It operates exclusively with the new 20-gram Swoosh Drain Gun cartridge. According to the company, most drain guns operate with a 16-gram CO2 cartridge. The 20-gram CO2 cartridge provides 25 percent more capacity, allowing technicians to clear most lines using just one cartridge. Packaged in boxes of 20, the cartridges contain oil-free CO2 and are 100 percent recyclable.

“If a technician is walking around with the canister, they can place it in upside down and be free to move about without the tip being punctured prematurely,” said Eric Martini, product line manager, DiversiTech. “Once the technician gets to the area where they want to actually go ahead and clear the condensate line, they can flip the cartridge around and it makes a specific sound to let them know that it is in the right way.”

Then the locking mechanism is engaged, and an adapter is attached to the condensate line. The adapter functions straight up and down or at 90 degrees. When the user is ready to clear the line, they hit the trigger once and then dispose of the CO2 cylinder.

“Some say that technicians can get two or three shots out of one of these cylinders, but we recommend one shot,” said Martini. 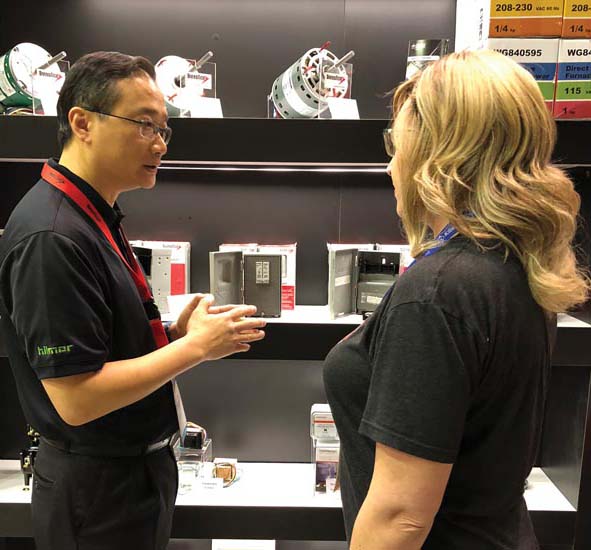 ELECTRICAL DISCONNECT: Andy Lin from DiversiTech explains that technicians can benefit from the DDS-60SW Molded Case Switch Disconnect that is UL listed and rated for outdoor applications. It acts like an ordinary light switch and eliminates the pullout handle.

On the hilmor® side of the DiversiTech Corp. booth, there were six new tools released at the show. According to the company, “Retool + Conquer” is more than a tagline to them.

Starting with refrigerant tools, hilmor released the Infrared Refrigerant Leak Detector that has a sensor with a 10-year life. Other features include an easy-to-read TFT LCD screen providing clear, visual confirmation of the leak location and both an audible and visual notification for leak detection. It works on all halogenated refrigerants.

Ideal for tight spaces, the Heated Diode Refrigerant Leak Detector has a flexible probe allowing easy access to small spaces. Other features include audible and visual notification and an LED screen. It also works on all halogenated refrigerants.

The new Refrigerant Recovery Tool makes evacuation quick and easy, according to the company. It is self-adjusting for ¼- and ½-inch lines. With a secure lock, stainless steel piercing valve, and cushion grip, the tool saves refrigerant and time.

Able to be used inside or outside the protective case, the new Refrigerant Scale has a backlit LED display and provides readings in 0.2 oz. increments. Its rubberized surface provides tank stability and protects the scale.

“We designed this scale with the pad on the top to cover the entire surface,” said Greg Lain, product manager for Hand Tools, hilmor. “A lot of times, what happens is that the pads won’t cover the whole top surface, and the tops will get scratched and peel off. When we designed this top plate on here, we made it one piece that is anchored at every corner.”

Looking at hilmor hand tools, the new Reamer deburrs copper tubing. Its four-blade design allows for quick removal of material and works on tubing from ¼-inch to 15/8 inches. The product can be used on both soft metal and stainless steel tubing. It also features a drill attachment to speed up the work with less effort.

The new Tri-Tube Benders with their calibrated markings make for accurate, precise angles. With a compact design allowing access in tight places, offset handles for easy 180-degree bends in swift motion, and a non-slip grip, the product is ideal for use from start to finish.

What is quickly becoming a staple at the AHR Expo, the Fastest Hands in HVAC/R contest was held again on the hilmor side of the booth. 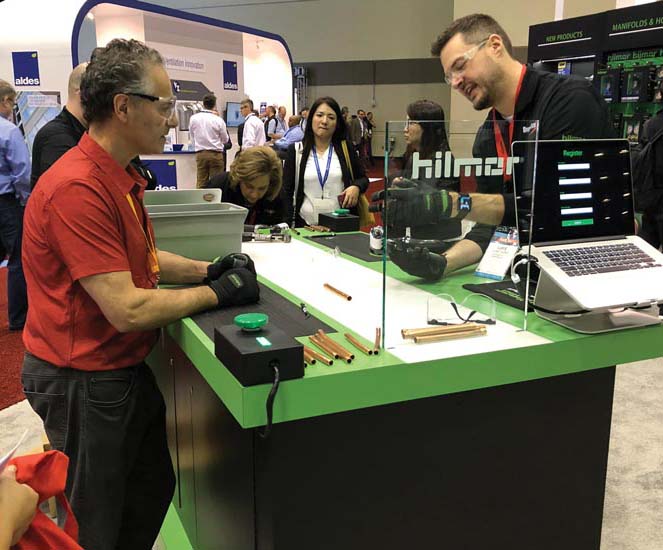 FASTEST HANDS INSTRUCTION: A contestant for the Fastest Hands competition receives instruction on what is expected during his turn.

Evan Gutman, 22, of Doylestown, Pennsylvania, is a technician with Doylestown Air. He was in first place out of 350 competitors after the initial round of competition, which involved deburring and swaging both ends of a copper tube. Gutman completed this task in just 17.7 seconds. He, along with 15 other competitors, went on to complete other common tasks called for on the job until the field was narrowed to four. In the final timed event, the remaining competitors were required to demonstrate proper refrigerant recovery and vacuum pump evacuation techniques. Gutman completed the final task in 39.6 seconds, a full ten seconds ahead of the second place finisher. He received $1,000 worth of hilmor tools.

“It feels great to have the fastest hands in the industry,” said Gutman. “Hopefully I can come back next year and defend my title.”

“This is a fun way to let technicians experience firsthand how our tools work,” said Andrea Halpin, brand director, hilmor. “Most of them have a very competitive spirit and really enjoy seeing how fast they can do something, especially compared to their counterparts.”