Company highlights commitment to the safe transition to A2L refrigerants

The AHR Expo is the marquee event for the refrigerants industry, and Chemours cherishes the opportunity to connect with customers there, said Allison Skidd, North America fluorochemicals marketing manager at Chemours.

“The Expo also offers the ability to showcase the latest in refrigerant solutions and engage in active dialogue about key issues driving innovation,” she said. “Chemours brings over 85 years of history and market leadership in refrigerant science, having pioneered much of the technology that makes air conditioning and refrigeration possible today. We were excited to share the significant developments in our fluorochemical refrigerants business at the show.”

Chemours had an eventful 2019, marked by the following events:

Opteon XP10 (R-513A) refrigerant is a non-ozone depleting potential, low-GWP refrigerant that can be used for new equipment as well as the retrofit of existing systems. As demonstrated by the successful chiller conversion at the Pepsi Center, Opteon XP10 offers an excellent cooling capacity and energy efficiency match for R-134a that is easily serviced and environmentally sustainable, said Skidd.

At the AHR Expo, Chemours also focused on its commitment to bringing about the safe transition to mildly flammable refrigerants in North America.

“While class A2L refrigerants are not new, considering the successful global transition in automotive air conditioning of the past seven years, their use in residential and commercial HVACR is a significant change for North America,” said Skidd. “As announced in late 2018, Carrier selected R-454B, sold commercially by Chemours as Opteon XL41, as the R-410A replacement in residential and light commercial ducted air conditioning equipment. This change is anticipated in 2023 to comply with the proposed HFC regulations in California.”

Other states have also committed to taking similar measures to restrict HFCs, and A2L refrigerant use will become more urgent, she said.

“Chemours participates in several industry efforts to ready the end-to-end supply chain for the transition, and information about this topic is now available in our quarterly newsletter on A2L refrigerants (go to opteon.com/A2L to subscribe),” said Skidd.”

When asked about whether R-32 or R-454B will emerge as the primary refrigerant to replace R-410A, Diego Boeri, vice president of fluorochemicals at Chemours, responded, “Our solution, R-454B, is less than 500 GWP, while R-32 is about 45 percent higher. In Europe, the average GWP phasedown is about 80 percent from the current 2,500 GWP baseline, so you must be below 500 GWP on average in your portfolio. With 675 GWP, R-32 may not carry you through the phasedown. In the U.S., there is not yet a phasedown, but it is coming. So, do you want to use something that will not take you until the end?”

In addition, noted Boeri, R-454B is very design compatible with R-410A, so it’s a less significant conversion for most OEMs. In this period of uncertainty, he said that having a solution that can be used in an existing air conditioning factory line brings value. As far as the cost is concerned, while R-32 is a cheaper molecule in an unregulated market, that will likely not continue, he said.

“In a regulated market, R-32 has a higher GWP, so it is going to be more expensive,” he said. “In a regulated market, like in Europe, you don’t sell on price per kilo, it’s price per CO2 tons. With R-32, you must invest in more cutbacks, so is that what you want to do in a time of uncertainty? Our solution, R-454B, has been chosen because it provides a solid foundation both financially and environmentally, making it the optimal choice.” 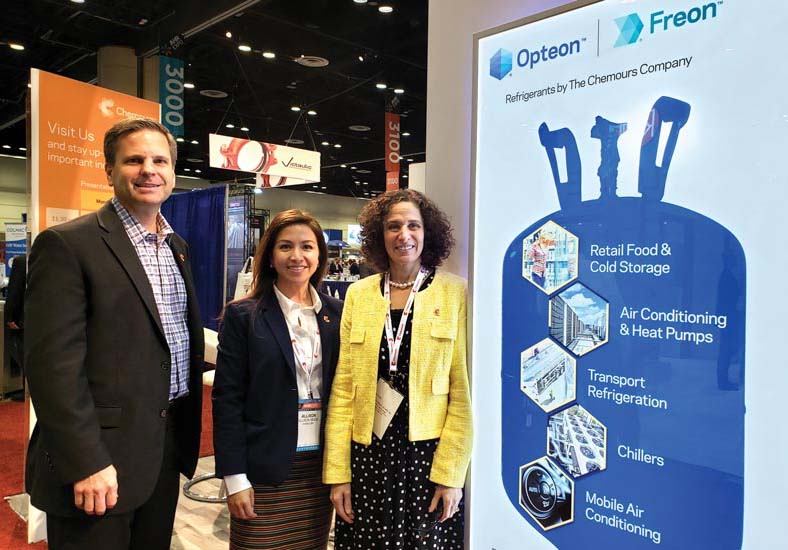 HFCs, with varied timing and implementation details, said Skidd. There is also a bipartisan senate bill for federal HFC regulation, the American Innovation and Manufacturing (AIM) Act of 2019, which is being offered to create an orderly transition.

That issue was top of mind with many visitors to the booth, said Joe Martinko, business director – Americas, Opteon/Freon fluorochemicals, at Chemours, with contractors wanting to know about the regulatory changes concerning refrigerants.

“We gave presentations on U.S. regulations at our booth, as that tends to be a key question we receive,” said Martinko. “We’re focused on educating the industry about the status of the regulations, including the phaseout of R-22 — what that means and some of the alternative products we offer. It’s a comprehensive approach to communicating changes and offering solutions.”

Skidd added, “The degree of change in the industry presents an opportunity in that Chemours is uniquely positioned to offer a full range of refrigerants to meet the varied equipment and regulatory requirements and to work with OEMs, system integrators, installers, and retailers to identify the right solution for their business. And where an obvious solution does not currently exist, we employ the talent and expertise of our innovation team, who work closely with industry partners at the earliest stages of development.”