One of the things Arkema looked forward to most this year at the AHR Expo was reconnecting with its customers and peers after a two-year hiatus. This allowed them the opportunity to talk about the company’s continued efforts in sustainability, which include several low-GWP products, as well as a partnership with Nutrien Ltd. for the supply of anhydrous hydrogen fluoride (AHF) to Arkema’s Calvert City, Kentucky site.

“The AHF is produced using fluorine that occurs naturally in the phosphate that Nutrien processes to manufacture its products,” said Scot Swan, market manager of refrigerants at Arkema. “This replaces the more usual source of mined fluorspar. Nutrien will produce the AHF at its Aurora site. This innovative investment is the first of its kind in the United States.”

Two of the low-GWP Forane refrigerants that Arkema highlighted at its booth were R-32 and R-516A. Both of these A2L refrigerants have a much lower GWP replacement than their predecessors, which is important when considering long-term availability of refrigerants with the new AIM Act rules. 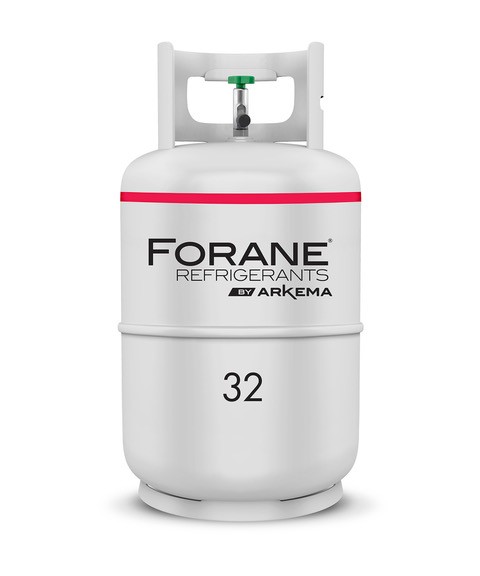 OEM APPEAL: Arkema is the only producer of R-32 domestically, and its higher efficiency and higher capacity have made it appealing to OEMs in the air conditioning market. (Courtesy of Arkema)

While not new to the market, Forane R32, developed as a lower-GWP replacement for R-410A in air conditioning applications, is a single component HFC ideal for commercial air conditioning systems, heat pumps, dehumidifiers, and small chiller applications. Arkema is the only producer of R-32 domestically, and its higher efficiency and higher capacity have made it appealing to OEMs in the air conditioning market, said Swan.

“R-32 is a single component refrigerant, which means for contractors and HVACR professionals, the pressure and temperature attributes are predictable,” he said. “This is a real challenge for blends. especially when contractors encounter leaks. R-32 is also a ‘cradle-to-cradle’ product in that it is much easier to reclaim and recover than a blend.”

Forane 516A is a very-low GWP (<150), azeotropic (zero glide), A2L (mildly flammable) refrigerant blend that is intended for use in the refrigeration and air conditioning markets. R-516A’s properties very closely match R-134a, and it has good compatibility with existing system components that use HFCs today. Even though it’s a blend, it still behaves as a single component refrigerant because it has zero glide, said Swan, and OEMs like how Forane 516A’s performance closely matches that of R-134a.

Arkema was also excited to announce the promotion of Glenn Haun as the first general manager of Forane refrigerants in North America. In this new role, Haun has responsibility for all refrigerant business activities including R-22 management, HFC quota value optimization, as well as the evolution of the business to new lower-GWP refrigerants for stationary and mobile air conditioning. Haun joined Arkema in January 2011 as a sales director and has been dedicated to the fluorochemicals business since then.

As for opportunities, now that the AIM Act in place, people are becoming more aware of lower-GWP refrigerants, and Arkema sees the industry accelerating the move to lower-GWP products. This will also mean implementing A2L refrigerants in order to comply with the GWP phasedown.

“Arkema has a 60-year history with the HVACR industry,” said Swan. “We’ve been through many phasedowns, and we are experienced enough to continue to sustain customers and the industry through the next transition and beyond.”