This website requires certain cookies to work and uses other cookies to help you have the best experience. By visiting this website, certain cookies have already been set, which you may delete and block. By closing this message or continuing to use our site, you agree to the use of cookies. Visit our updated privacy and cookie policy to learn more.
Home » 2019 Best Contractors to Work For: HVAC Company Owner Allows Employees to Grow Fast
Business ManagementHVAC Residential MarketHVAC Light Commercial MarketHVAC Commercial Market

Michael DeRitis never puts work before his workers. The owner of Madison & East Mechanical Corp. in Parkland, New York, will turn down a job if it puts too much stress on his staff. DeRitis values his clients, but he knows the clients get better results from happy workers.

“I put myself in their shoes before I make a decision,” he said. “I know that if my employees are happy, then my job site will be happy and my client will be happy.”

It’s this approach that helped earn DeRitis the designation of The ACHR NEWS’ Best Contractor to Work For in the East region. This is the second time DeRitis earned a distinction from The ACHR NEWS; he was also named to the “40 Under 40” list last year. That’s a major achievement for a contractor in his early 30s. But one common theme among his employees is that DeRitis gives them the opportunity to thrive at an early age, just like he does.

Dominic Evangelista is one example. Evangelista graduated with an associate’s degree in mechanical engineering and went to work for his uncle in the HVAC business. Evangelista moved on to another contractor, but felt limited wherever he went.

“I felt like I wasn’t improving at the other companies,” he said.

With his training in mechanical engineering, Evangelista thought he should be a project manager. DeRitis agreed, and that’s the position Evangelista has held at Madison & East for the past three years.

DeRitis himself graduated from college with a degree in architecture. But he had a lifelong passion for working on mechanical systems that led him to the job with his own uncle. DeRitis worked for his uncle for several years before striking out on his own seven years ago, at the age of 25.

DeRitis said he learned a valuable lesson from his uncle: how not to treat your employees. DeRitis’ uncle wasn’t a bad guy, but he tended to give him the hardest time of all the employees because he was his nephew. As a result, DeRitis tries to consider his staff whenever he makes a decision. 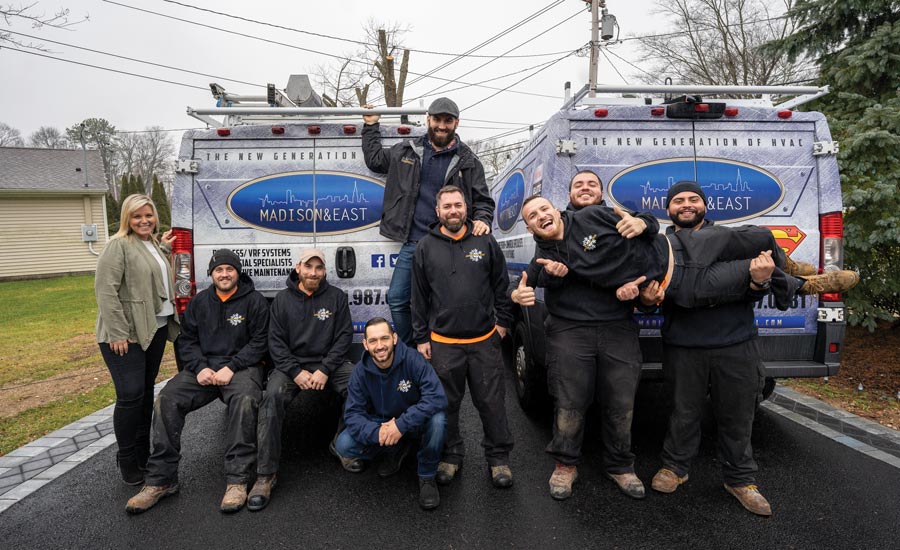 MEET THE TEAM: DeRitis tries to keep his employees happy, believing they will share that enthusiasm with his customers. “I might spoil them, but they’re happy,” he said.

“I spoil them,” he said. “I might spoil them too much, but they’re happy.”

Kevin Madden, Madison & East’s vice president of sales, said that’s a different approach than any of the companies he’s worked at since he entered the HVAC business in 1998. Madden said the New York market breeds a rougher attitude, but that’s not the case at Madison & East.

DeRitis understands when employees make a mistake, as long as they own up to it, Evangelista said.

“Mike doesn’t seem like the boss until he has to be the boss,” Evangelista said.

DeRitis said he likes being on the site. He appreciates spending time with his crews, but more than that, he really enjoys the entire mechanical process. He wants his employees to share that enthusiasm. The atmosphere stays relaxed when DeRitis is off-site because he hires personable employees, Evangelista said. When hiring, DeRitis looks for attitude more than skills. He said he can mold somebody who shows up 20 minutes early every day.

“If you come in and you don’t love your job, we don’t want you here,” he said. “All of our guys love their job, and they feed off each other. It’s not work.” 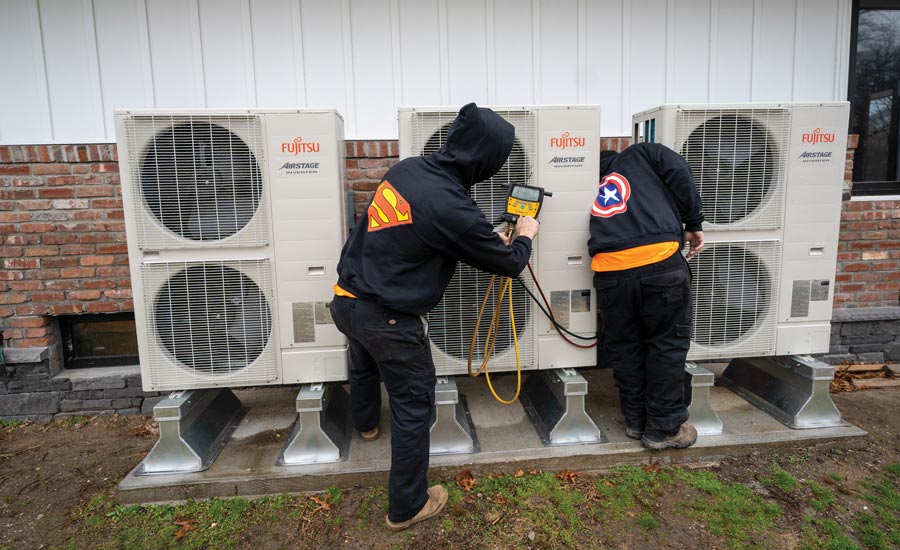 TEAMWORK: Employees at Madison & East work to help each other succeed. “Camaraderie ... it’s the vibe that we bring,” said Kevin Madden, vice president of sales. Here, two techs work side by side checking pressure at a job site.

Part of this is attitude, but organization plays a major role as well. Head technician Brandon Rodriguez said he left his last job because he would often miss a day’s work due to miscommunication. A friend working at Madison & East said Rodriguez should move over there, and that proved a great decision. He hasn’t missed a day’s work due to poor planning since then.

While some might worry placing employees first hurts business, Madden said creating a positive attitude only benefits the customers. He said DeRitis receives constant compliments about how happy and professional Madison & East’s workers are.

“It’s the vibe that we bring,” Madden said.

The word that comes up often with employees is “camaraderie.” Employees work to help each other succeed. Madden said he’ll take calls at 11 p.m. from a crew seeking his advice. That’s another way Madison & East differs from other firms in its market.

“I’ve seen places where everybody climbs over each other,” Madden said. “That doesn’t happen here.”

Madison & East mostly focuses on light to medium commercial work, with only 20 percent of the firm’s business coming from residential clients. Lately, gyms such as Crunch Fitness have provided a lot of jobs. DeRitis likes these projects because most have adopted an industrial look with exposed ducts. This means Madison & East’s staff spends less time crawling around in ceilings. 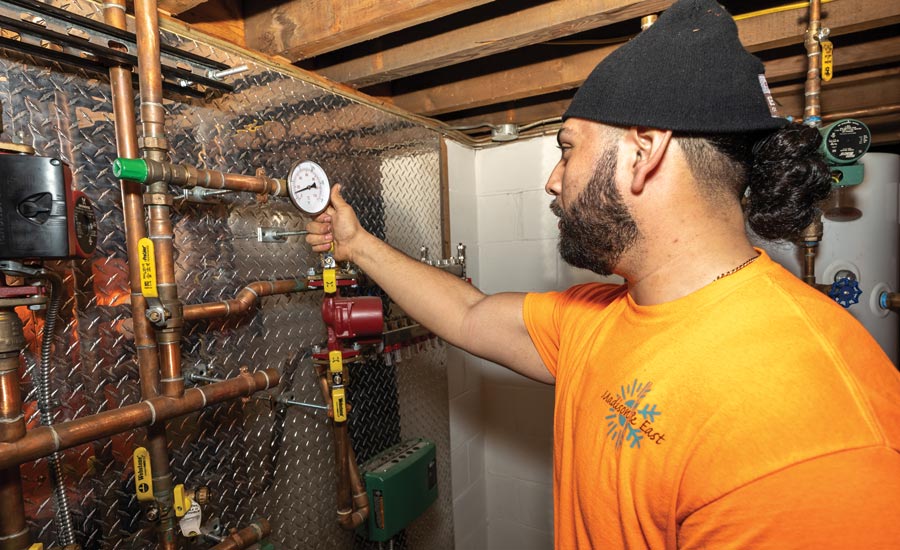 BOILER ROOM: A technician checks the line voltage at a boiler install. Madison & East mostly focuses on light to medium commericial work, with only 20 percent of the firm’s business coming from residential clients.

Madison & East also works on a lot of school projects. DeRitis said this has been a growing area for the firm. Overall, business has been strong since June, and he sees few signs of it letting up any time soon. Madison & East focuses mainly on installations because having too much service work puts extra pressure on staff, DeRitis said.

Installations also allow DeRitis to work on his favorite part of the job — estimates. He started out doing estimates for his uncle, and he still loves figuring out the numbers and working to beat out the other contractors. It also provides an opportunity to draw on his architectural training.

“I like the competition behind it,” DeRitis said. “I’m very involved with it to this day.” 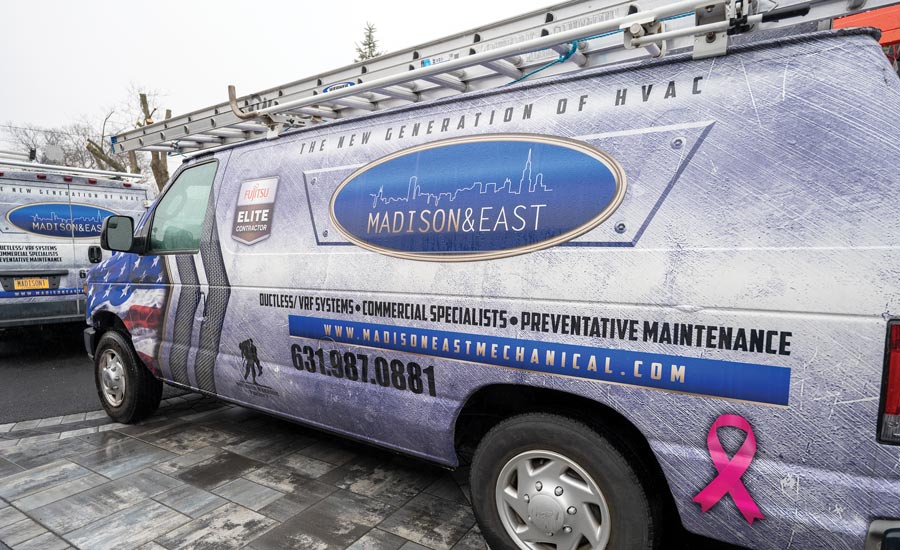 INVEST IN YOURSELF: Madison & East pays full-day wages for staff to attend manufacturer training, then posts the certificates at the office.

The architectural background comes into play also when DeRitis teaches technicians how to look at plans. That’s just one type of training Madison & East staff receive on a regular basis. DeRitis invests considerable resources in training and education. The company pays full-day wages for staff to attend manufacturer training. DeRitis then posts the certificates on the wall of Madison’s office. He takes courses himself and encourages his staff to do the same.

Those who put in the effort to improve themselves move up quickly. Thomas Krug never worked in HVAC before joining Madison as a helper a few years ago. Krug did have a background in construction and took it upon himself to learn the HVAC business. Today, he is Madison & East’s senior installer. 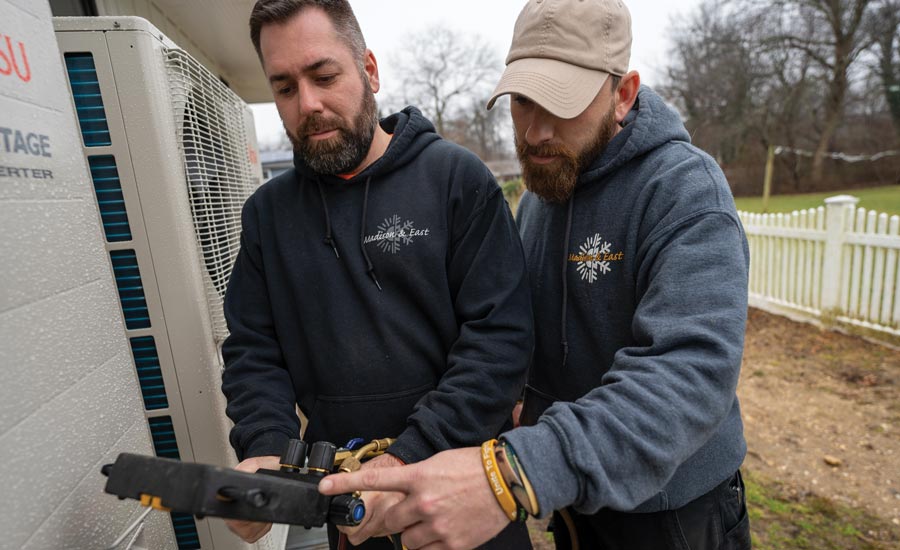 TAKING CHARGE: Madison & East techs read pressure to ensure a system is properly charged. DeRitis rewards hard work and learning, and he makes that work easier for his staff by providing company vehicles and phones and allowances for uniforms and for cleaning the uniforms.

DeRitis rewards his staff in other ways. He provides them with company vehicles and phones, as well as benefits like a 401(k) plan. He provides an allowance for boots and contracts with Cintas for the company uniforms. Probably the biggest benefit for employees and their families is that Cintas cleans the uniforms, meaning employees’ personal clothing is spared the oil and other fluids that accumulate on their work clothes.

The best perk, however, is the annual staff vacation. Every year, all 12 Madison & East employees spend Columbus Day weekend someplace warm. This past year, the whole crew went down to Jamiaca. Half the staff leaves on Thursday night, with the other half departing on Friday.

“I’ve never in my life heard of a company doing that,” Madden said.

Despite all that DeRitis offers in terms of benefits and atmosphere, he struggles to attract quality employees. Even though Madison & East pays $42 an hour to start on prevailing wage jobs, new workers often go just a few days before they start showing up late, if they show up at all. DeRitis said it’s the most frustrating part of his job.

“They have an opportunity right in their hand and they can’t grasp it,” DeRitis said. 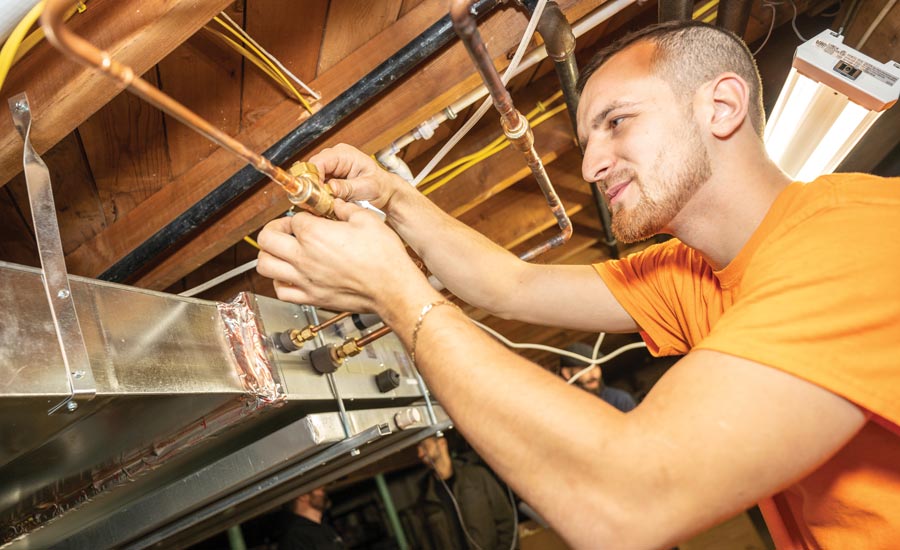 LOOKING FOR TALENT: Long Island, like most markets, faces a shortage of skilled laborers. DeRitis offers a scholarship and internship to high schoolers, and a lesson to anyone of any age: “If you’re a good person, you do good work, and you have a good attitude, it’s contagious.”

Long Island, like most markets, faces a shortage of skilled laborers. That’s why DeRitis started a scholarship at a local high school: to attract fresh blood to the business. He wants these kids to understand that HVAC provides more opportunities than the common perception. The scholarship includes a monetary award and a six-week internship at Madison & East.

To anyone of any age, DeRitis offers a pair of lessons. The first is that results equal the time put in — and however much you think that is, it will turn out to be more. The second is that positive output grows as it’s given.

“If you’re a good person, you do good work, and you have a good attitude, it’s contagious,” DeRitis said. 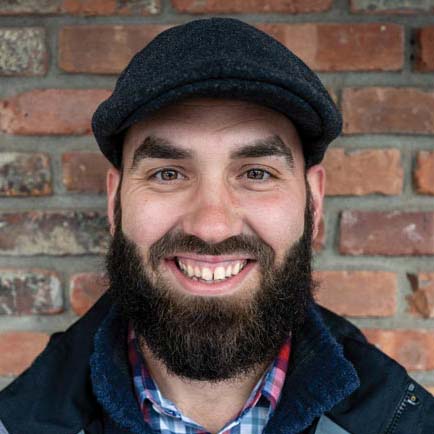 BENEFITS BEYOND MEDICAL/DENTAL INSURANCE: Vision insurance plan covering annual eye exams and a portion of new eye glasses/contacts. 401(k) plan wherein employees have to work 1,000 hours to be eligible for inclusion in the plan. Madison & East offers a 3 percent safe harbor match. Employees can get a discount on auto insurance, pet insurance, and earn reward gift cards for no accidents, perfect attendance, and promptness.

THE ACHR NEWS SELECTED THIS CONTRACTOR BECAUSE: DeRitis takes care of his employees in a number of ways, from training to considering their needs when accepting jobs. This dedication to his staff includes an annual four-day company trip to places like Florida and Jamaica.