Institutional buildings used by the public — schools, airports, hospitals, prisons, rec centers — bring special HVAC challenges because each one comes with its own distinctive set of needs. This often requires manufacturers and contractors to come up with specific solutions, sometimes going as far as inventing new equipment. What follows are examples of how solutions were found to these problems, ranging from applying old-fashioned elbow grease to cleaning units to developing a new kind of coil.

Bob Cooney, founder of Cooney Technologies, recognized that institutions needed a system to prevent their coils from failing due to freezing and then rupturing. A third of coils are damaged due to freezing, he said. The main reasons for this are human error, a mechanical system failure, or a natural act.

At pharmaceutical laboratories, for example, the research needs to take place at the same heat and humidity levels at all times, or years of research and development might be lost. One major pharmaceutical company even experienced environmental issues when glycol used in its system spilled out following a coil failure, Cooney said.

Pharmaceutical laboratories also use animals in their research. If an air conditioning system breaks down due to coil failure, all of those animals may need to be evacuated. Facilities that house large populations, such as college dormitories and prisons, also want to avoid evacuations. Then there are concerns about developing pathogens, such as legionella, in the ductwork. Both types of institutions want to avoid these issues as well as the bad press an air conditioning failure can bring. 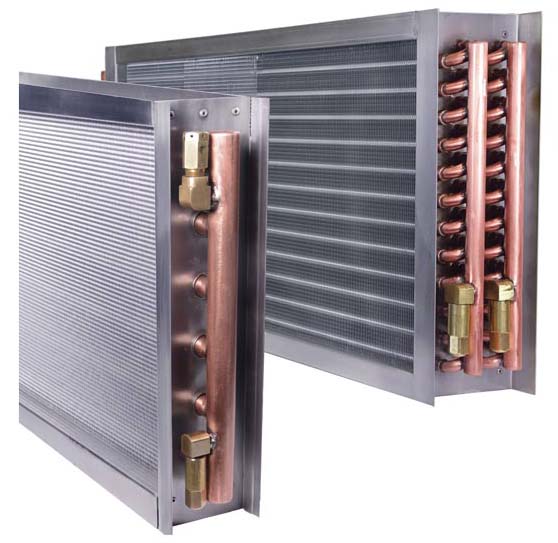 Cooney started out selling pipe-freezing equipment, which can intentionally freeze a section of pipe as needed when a hospital wing needs to be isolated. As a result, he became familiar with the science behind freezing and thawing. Years later, he worked on a paraffin valve technology that could help to prevent freeze damage. Cooney used this knowledge to develop Freeze Block technology.

“Once a coil freezes and ruptures, it can thaw and destroy a facility if not contained immediately,” Cooney said. He knows of one hospital that lost an MRI facility and two operating rooms due to a flooding caused by a burst coil. This cost the hospital in the replacement, cleaning expense, and mold remediation, as well as lost revenue.

The valve also has a temperature-sensing element that is designed to prevent ice from forming in the headers and growing toward the center of the coil.

Freeze Block coils are now being added to new air handlers. The latest innovation includes a conductivity sensor attached to the valve that communicates with the building automation system to alert facility managers when the valve is triggered and water is dispensed.

The Berglund Center, a multivenue public assembly facility in Roanoke, Virginia, earned recognition from the U.S. Department of Energy as a 2019 Better Buildings Challenge Goal Achiever. Roanoke is one of only seven local governments nationwide to achieve that title since the federal agency introduced the energy efficiency challenge seven years ago.

Opened in 1971, the Center includes a sports arena, a theater, and two large areas for events such as trade shows.

As the largest energy user of all of Roanoke’s city-owned buildings, the Berglund Center became a focus of the city’s efforts to improve efficiency. The entire process to improve the Center’s energy efficiency took eight years from start to finish. The first phase focused on HVAC systems, which consisted of restoring HVAC equipment to intended performance levels through selective repair and maintenance. This required air and water balance and calibration of the controls to ensure proper operation. The second phase included the replacement of aged comfort cooling chillers with magnetic bearing chillers. The city selected magnetic bearing chillers because of their ability to ramp down when the load lessens but retain high efficiency.

The process of replacing the aged chillers continued with the installation of two Trane high-efficiency chillers used to freeze the coliseum floor for ice build, replacing three 40-year-old York hermetic compressors that were each driven by a 100 HP electric motor.

Phase three had city staff designing and replacing the pneumatic (air-drive) controls with Trane wireless direct digital controls. The advantage in using digital controls is that they sense the conditions and respond more quickly. The wireless feature has an added benefit — the wireless devices are signal repeaters, thereby reducing the need for cabling and cable raceways.

Staff then tackled one of the biggest heat sources by replacing the lighting in the sports arena. City staff replaced 180 1,500-watt quartz lights with 92 LED lights, designed by an outside engineering firm. Additional energy reduction practices include the replacement of all exterior doors, creating a tighter air seal for the facility’s common areas.

John McGhee, Roanoke’s facilities manager, said city staff completed most of the work on the HVAC and lighting projects in-house. The city’s senior management has created positions attractive to licensed and certified private sector tradesman. The portion of work assigned to outside firms was limited to a final check of the equipment (by the providers) after city staff completed the installation, as well as the initial start-up and commissioning.

As part of the city’s effort for continual energy savings, Berglund Center staff, led by General Manager Robyn Schon, ensures that equipment and lighting are shut off when not needed and that air temperature is controlled based on event needs. This management of Berglund Center’s systems is beneficial, as there are times when only one of the four venues are in use, so shutting down the equipment and lighting saves significant amounts of energy. A reduction of over 1 million kWh was realized in the first year following the installation of new equipment and tightened controls over energy consumption.

McGhee said the mission now is to ensure the equipment is maintained at the highest level, which is accomplished through a rigorous preventive maintenance program. The final piece of the energy savings puzzle is performance tracking through data collection. This data must be captured in a format that is consistent with the format used by the Department of Energy (DOE). Nell Boyle, Roanoke’s sustainability coordinator, is responsible for capturing and processing the data, submitting it to the DOE, and participating in regional and national events where the data is shared with many other localities and agencies. 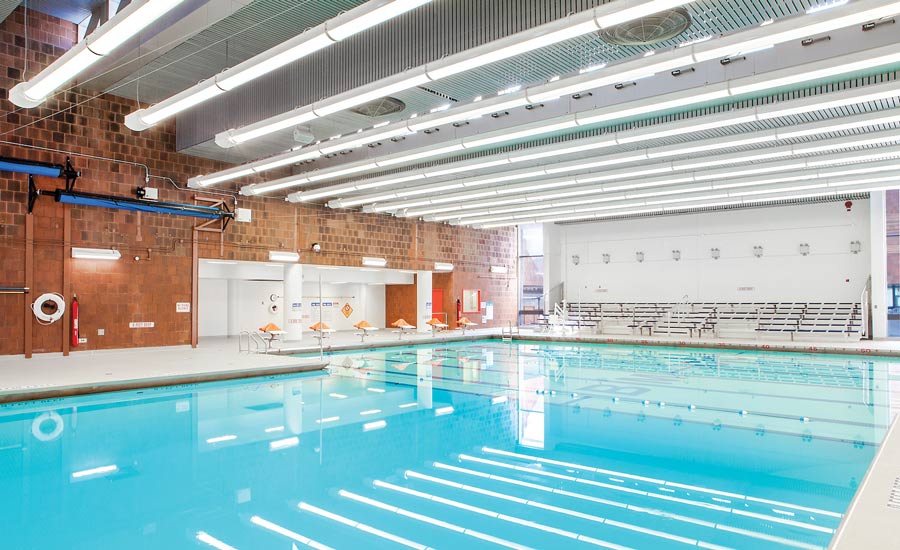 General contractor Stalco Construction recently completed a $7.2 million renovation of the Borough of Manhattan Community College’s aquatics center, including the 220,000-gallon pool. The Dormitory Authority of the State of New York served as the project manager.

The 4,575-square-foot pool features six competition lanes, each of which is six feet wide and 25 yards long. The Stalco team installed new motorized vinyl sheathing that will cover the pool when it is not in operation. According to Erik Rappel, Stalco’s project manager, “The sheathing not only prevents water and heat loss, it reduces humidity and wear and tear on the HVAC systems. BMCC expects to save over 4,400 kW of electricity this way each year, which translates to a savings of nearly $41,000, not to mention less of an environmental burden.”