If HVAC contractors found meeting the demands of cannabis growers challenging, wait until they start working in the latest growing field — alternative protein. When most people hear the words “alternative protein,” they probably think of plant-based meat substitutes like the Impossible Burger. But when those in the field of indoor agriculture hear those words, their thoughts often focus on stuff with more legs. And moving.

Could insects prove the solution to the growing world demand for protein? The immediate growth potential lies in feed for livestock and aquaculture. Insects provide a much more sustainable protein alternative to soy farming, which is linked to such recent disasters as the Amazon rainforest fires.

Some growth will come from direct consumption. Most of this comes from Asia and Africa. U.S. consumers remain squeamish, for the most part, about eating insects, although there are a range of products that include cricket-based protein powder, including sports bars, tortilla chips, and cookies. There is even a butter substitute that uses insect protein.

NOT A BUGGY IDEA

The idea of investing in a future of bugs as integral to the food supply might seem strange, but there is plenty of money behind it. A French company that breeds insects for fish and animal feed raised more than $125 million earlier this year, making it one of the most successful funding rounds for the agriculture industry. A study by Markets and Markets projects the insect protein market will reach $1.336 billion by 2025, up from $144 million in 2019.

“The market is driven by factors such as the shift in consumer preference from animal protein to alternative protein such as insect protein due to the increased concerns over future sustainability, and the increased public and private support for new insect protein development projects in both developed and developing economies,” the report states. 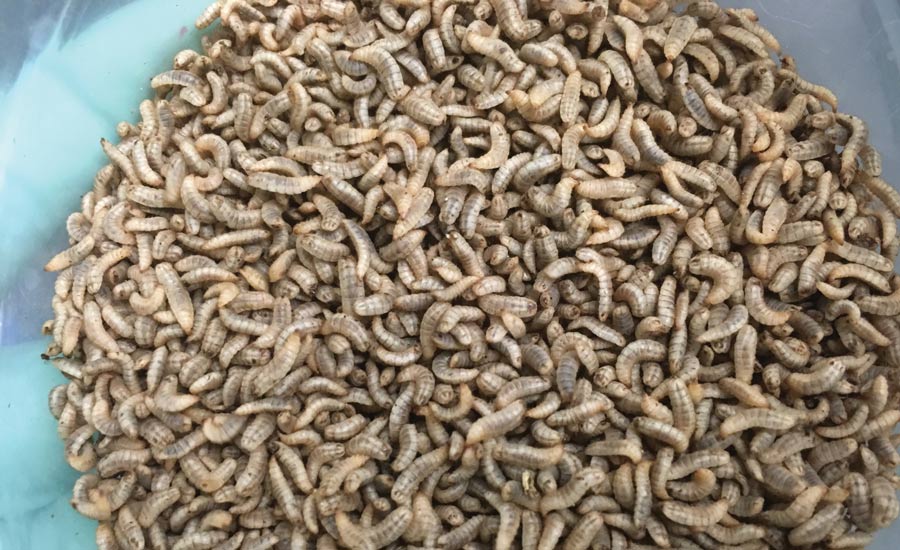 MEETING DEMAND: Each species, such as these black soldier fly larvae, requires a tailored environment. Adding to the HVAC challenges, the bugs influence their environments in numerous ways.

For the most part, feed insects need to breed indoors, and this comes with very exact HVAC requirements. Lydia Palma Miner works for Dr. Greenhouse, an HVAC consultant for the indoor agriculture industry and is pursuing a Ph.D. in biosystem engineering; her thesis is on growing black soldier fly larvae from the waste produced by almond production. These larvae are being considered as potential feed for fish and poultry in the U.S., and even as pet food.

Miner said the main concerns with raising these larvae are the same as any indoor agriculture HVAC system — temperature, moisture content, and air flow. The larvae need the temperature at around 30°C, with 70 percent relative humidity. The larvae like it moist, Miner said, but if the substrata they grow in becomes too moist, they become difficult to harvest.

“As you scale up, HVAC is one of the main challenges,” she said.

The main concerns with raising larvae are the same as any indoor agriculture HVAC system — temperature, moisture content, and air flow. “As you scale up, HVAC is one of the main challenges.”
— Lydia Palmer Miner
HVAC consultant Dr. Greenhouse

Each species of insect comes with its own requirements. Crickets need a dank environment: 85°F and 30-40 percent humidity, said Kevin Bachhuber, a consultant who works with insect farmers. That’s why most cricket farming has been done in the South, where farmers can take advantage of the natural environment.

In order for insects to become a viable food source for people and animals, they need to grow everywhere, Bachhuber said. This means replicating the natural conditions in which the insects grow. The good news is, if this can be accomplished, insects will provide a cheap protein that can grow in a small amount of space, said Eric Tilton, a consultant with Hermetia Pro. Tilton said the industry requires many of the solutions found in other fields, such as hothouses and poultry farms.

Each species has different needs, but there are some common challenges. Circulation is key, even more so than in greenhouses, said Wendy Lu McGill, CEO of The Rocky Mountain Micro Ranch (RMMR) in Colorado. While plants draw in CO2 and expel oxygen, insects draw in oxygen and expel CO2. Their dense populations mean their entire population can poison itself in the absence of proper circulation, McGill said. Insects also expel waste, and this creates moisture control challenges.

Right now, the industry consists of a lot of small players, although there are some large U.S. companies, such as Aspire Food Group. As a result, most improvise their HVAC systems using off-the-shelf technology. Miner had to build her own system, using incubators and forced air flow. McGill breeds mealworms in a 40-foot shipping container. The company plans on moving into a warehouse space soon. When that happens, McGill said, they’ll need to look harder at their HVAC system. 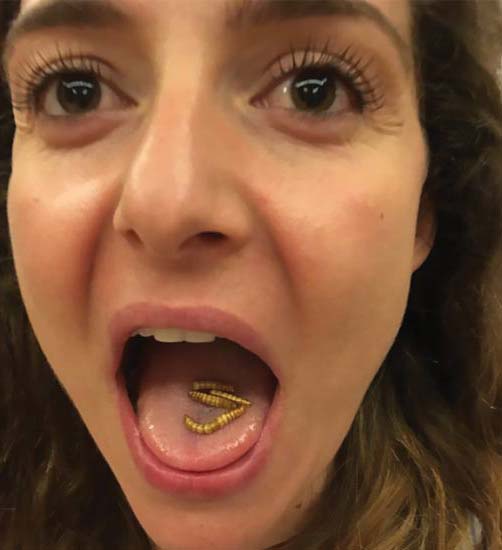 A MEAL OF MEALWORMS: Researcher Lydia Palma Miner samples mealworms at an event in China. Eating insects is expected to grow as an option in Asia before the rest of the world.

While that’s true, it’s also a major investment for a low-margin business, Bachhuber said. This makes investing in necessarily robust systems a challenge. For example, Bachhuber experimented with radiant heat, which worked well to solve issues with consistent heat but came at a high cost. The low margins also means farm owners have concerns about energy efficiency and other ways to control costs. Vendors interested in pursuing this industry need to understand these concerns, along with specific requirements of breeding.

If they do so, it could mean a lot of potential work for HVAC contractors who aren’t bugged by working with bugs.

“There definitely is a huge potential, and the more acceptable it becomes, the bigger the market gets,” Miner said.