Practice, process, and company culture are the secret to success

Two homeowners purchase the same piece of high-end HVACM equipment. Both own the same type of home. Both pieces of equipment run perfectly. But the first homeowner experiences impressive energy efficiency and skyrocketed comfort, while the second experiences only minor improvements.

What’s the difference? The installation. The first homeowner had a contractor who installed the equipment correctly. But the second homeowner’s contractor made several mistakes.

“The distributor we use gave us a system that we put in as a training system that has all things we can manipulate,” he said. “If you can just circle up your technicians and show them the difference between a system with low airflow and a system with proper airflow, all their light bulbs go off and they get it.”

Mutz explained that airflow is one of the largest areas contractors need to pay attention to. Ductwork is often undersized because of outdated rule-of-thumb measurements. Other problems include bad transitions, bad plenum fittings, and filters that are incorrectly sized. Or, a duct system does get properly designed, but then it gets crushed, kinked, or drilled through during installation. 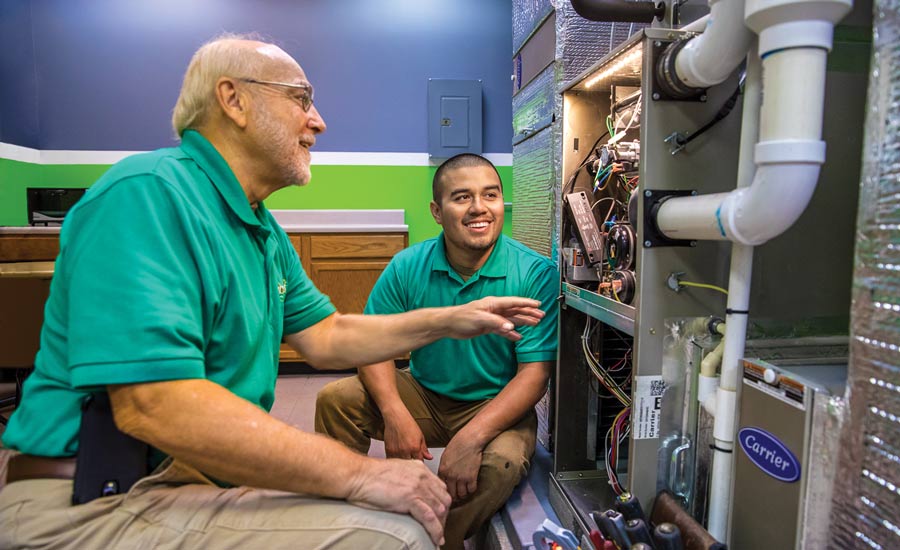 LEARNING NEW SKILLS: A Moncrief employee expands his knowledge base in a training session.

“We will often put turning veins in a return drop, because it makes the turn more efficient and it helps to eliminate some of the equivalent length of a return duct,” he said. “That’s something that takes just five minutes for an installer to do, but it’s often just not done because either they don’t know or they don’t want to.”

Mutz clarified that the majority of issues arise from not laziness but a lack of proper training. Moncrief uses a combination of in-house training, manufacturer training, and distributor training.

“It’s good to get people out of the building to hear other people that give them different opinions,” Mutz said.

He emphasized the importance of hands-on training, too, mentioning that most technicians don’t want to sit and listen to a lecture — nor is that how they learn the best.

“We’ll be very hands-on with any kind of class we’re doing,” he said. “If it’s a control board that’s failed, we’ll actually have it wired up, and they can put their own meter on it and see what the readings look like.”

“We’ll be very hands-on with any kind of class we’re doing. If it’s a control board that’s failed, we’ll actually have it wired up, and they can put their own meter on it and see what the readings look like. It’s good to get people out of the building ... to hear different opinions.”
— Phil Mutz
Vice president Moncrief Heating & Air Conditioning

At M & R Air Conditioning, according to co-owner Ricky Orta, the company holds meetings with technicians at least once a week to aid in learning high-end equipment, which can involve a steep learning curve.

“If I had a guy that had a tough situation with an install, I’ll bring it up at the next meeting and say, ‘What would you do in this situation?’” Orta said. “I’ll let everyone brainstorm before we come to a collective agreement on what we need to do in that instance, so that we’re really prepared for every situation.” 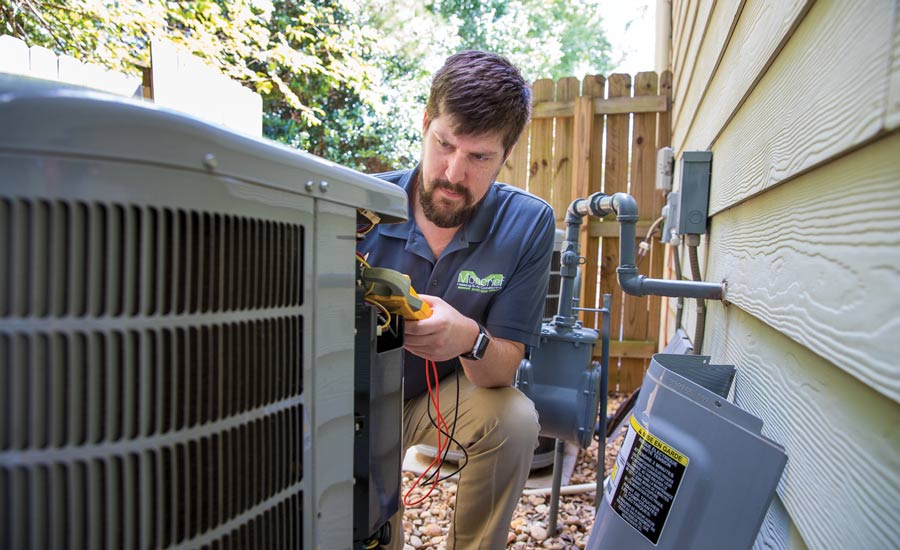 SERVICE TIME: A job that takes longer but is done properly the first time is more cost-efficient than a quicker visit that sets up a callback.

Orta works on crafting the meetings in an open forum style where people are not afraid to ask questions.

In addition to training, for Orta, ensuring correct installation begins before a product is even purchased by the homeowner.

“When we do a bid or an estimate, we take our time and look over the entire system that’s there,” he said. “So the first thing we look for is the correct sizing of the new system. We look at the ductwork that’s existing there. Does it need to be sealed, cleaned, or does it need to be replaced?”

Once a high-end product is purchased, M & R Air Conditioning technicians will work to program the equipment correctly. Orta mentioned that equipment does not always come programmed for the highest efficiency possible, so the company will make sure that everything (especially static pressure) is dialed in before they leave.

“Correct line sizing is actually very important as well,” Orta said. “And then verifying your superheat and subcooling. We use all types of digital instruments, the newest technology nowadays, to make sure that before we leave the site, the unit is doing exactly what it’s designed to do.”

Orta goes behind every install to ensure that it was done correctly. One of his first steps is checking whether there are any error codes, even on small items such as sensors. He will go through the whole system, checking that all of the readings are within factory specifications. And M & R will keep a record of those numbers, too, so that technicians returning later for preventative maintenance can compare results from the startup to where the system is a few months later.

“By being more thorough, we’ve eliminated our callbacks, and it makes for a much happier customer when they only have to see us once or twice a year for maintenance rather than constant service,” Orta said.

Joseph Rogers, owner of Rogers Heating & Cooling, South Boston, Virginia, believes that correct installation, along with the subsequent success of the high-end equipment sold to a customer, is also an issue of company culture. Ultimately, the employees of the company, from the top to the bottom, must believe that quality of work is more important than rushing through a job.

“Understand that a callback is embarrassing, first of all, and it’s actually more expensive than a job taking three hours longer to do it the right way,” Rogers said.

Rogers recommends that someone go behind each job with a checklist and a process in place that promises a job is done perfectly. Companies should also encourage training for everyone, cultivating an eagerness for learning about high-end equipment functions and how to service it.

Such a culture will even seep into the sales process. For example, Rogers Heating & Cooling will not try to sell a high-end piece of equipment until a customer has the correct ductwork and insulation to support it.

“Creating a price structure and a business built around quality and providing the customer a great service, versus pricing your jobs trying to just win the project — that’s what makes a difference,” Rogers concluded.