Air sealing isn’t duct sealing. And it isn’t insulation. It’s the process of controlling the flow of air by sealing off openings in the house, such as gaps and cracks, so that bad particles stay outside and the desired temperature stays inside. And it’s something more HVAC contractors should consider adding to their menu of offerings.

Bailes said uncontrolled airflow across the structure leads to problems like excess energy use and moisture issues.

“The house is a system,” he said. “There are a lot of different interacting parts. One of the main things you need to do with a house is control the flows of heat, air, and moisture.” 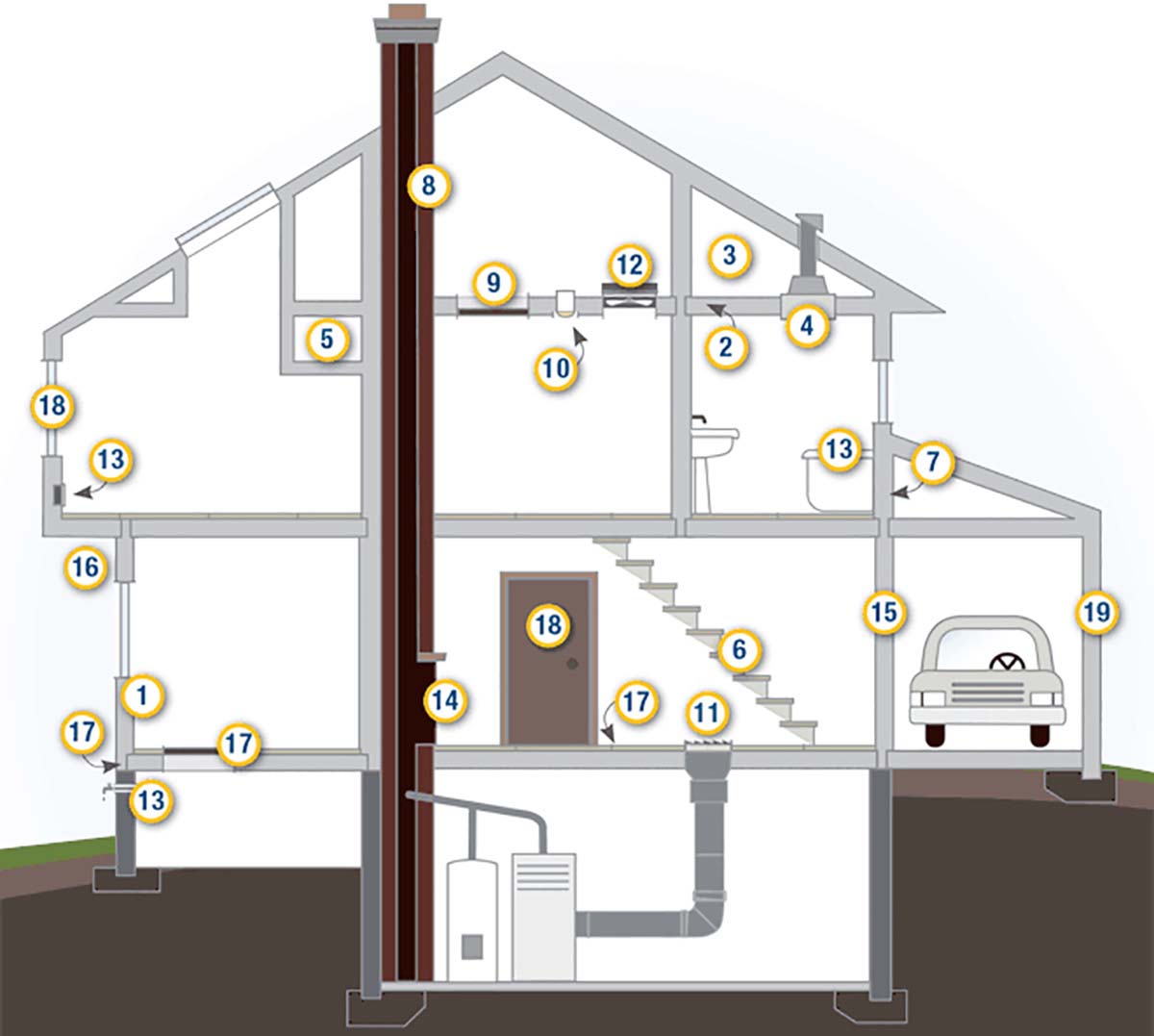 When David Peavey, owner of PV Heating and Air in Atlanta, runs into consumers who are confused about airflow, he compares the concept to layers of clothing. He tells customers that if they went outside in a sweater, they’d be comfortable at first, but once the wind started blowing, they would feel it through the small holes in the sweater. Adding a windbreaker keeps the wind off their bodies, while the sweater keeps them warm. Air sealing and insulation work together the same way, Peavey said. He then took the analogy to the beach, saying sand gets through those same small holes in the sweater, but not through the windbreaker.

Some builders and HVAC contractors claim, “A house needs to breathe.” Bailes said the problem with that thinking is that random leaks don’t solve the fresh air problem. Instead, they create an indoor air quality problem by allowing in toxins, molds, and other unwanted substances.

“You want a tight house and you want controlled airflow through mechanical ventilation,” Bailes said.

“What got me into it is there were problems we couldn’t fix,” Peavey said. “You can put in the best heating and air system, but if you have a lot of infiltration or air leakage, it may not solve the problem 100 percent. We got into it for that reason. It was the right thing to do.”

Not all consumers understand air sealing, so it requires more effort to sell than other products and services HVAC contractors offer. Peavey usually brings it up when customers contact his firm about insulation, explaining that insulation is worthless without air sealing. Otherwise, it comes up in conversation with the company’s consultants about air quality and energy efficiency.

All the field people as well as some of the administration at Air Control Home Services in Lake Havasu, Arizona, are BPI-certified building analysts, said Amanada Zink, president. This makes it easier to discuss air sealing with potential customers.

“We’ve always been on the cutting edge side of building performance,” Zink said. “We’ve been using blower doors and duct blasters for over 25 years. Once we had such a large amount of staff educated in the performance of a home, we were able to move more into air sealing and duct sealing, as everyone understood it.”

Technicians at Infinity Texas Air in Forney, Texas, do a whole-house inspection on almost every call. This is when the topic of improved performance arises.

Because of its market, Infinity primarily works on attics. Springer said most people spend little time in their attic, and even when they go up there, they don’t know what they’re looking at. Infinity techs show videos of the attic analysis. The video shows consumers the problem, rather than bombarding them with data, and Springer said consumers find it eye-opening.

“When you go too technical, you can lose a customer,” Peavey said. “When we present it, it’s a pretty simple conversation.”

That simple conversation gets complicated, however, when the talk turns to price. Air sealing can be expensive, running over $10,000 in some cases. There are some financing vehicles, but Bailes said to prepare for sticker shock.

“It is a big chunk for people to bite off,” Bailes said.

As a result, Infinity staff know the sale might not take place right away. Spring said the firm prepares for this by having staff role-play to overcome objections by explaining the value.

Peavey said air sealing requires a lot of work to do the right way. It can take several days to complete an air sealing project, and it becomes a question of diminishing returns. Peavey has switched several times between using a business partner and bringing the work in-house, which required investing in equipment and a special truck. Two years ago, the company switched back to using a partner, with an in-house employee serving as assessor/quality control auditor. Infinity is ultimately responsible if something goes wrong, Springer said, and having one of the company’s own employees involved helps control the outcome.

Bailes said either way works, and that the choice really depends on the contractor.

Whether a company does the work itself or partners with another party, Peavey said success in air sealing requires a commitment to the whole-house approach.

“It has to be part of your company’s philosophy,” he said.