For contractors, support has never been greater, even as the sector’s boundaries remain fuzzy

Growth means change, change means uncertainty, and yet that uncertainty is often the only way to the opportunity that lies ahead. The home performance contracting category is experiencing all of the above — from the business environment to consumer awareness, right down to the question of who and what “home performance contracting” (HP) even includes in the first place.

What is indisputable is the essential role that properly executed HVAC plays in HP success. For that reason, HVAC contractors looking to expand their business horizons could benefit from understanding where this sector is and what it has going for it.

The Building Performance Association did not exist six months ago, but its parts did.

Last spring, the BPA emerged from a merger involving three entities: Efficiency First, Home Energy Magazine, and Home Performance Coalition. That last group was itself the product of a merger between Affordable Comfort Inc. and the National Home Performance Council.

When the dust settled and all the new business cards had been printed, the BPA began its business of promoting its array of members and the work they do. The very nature of HP’s whole-house philosophy means this array includes everyone from contractors to building scientists to efficiency-minded nonprofits.

“Until the rise of utility programs over the last couple of decades, almost all of the companies we would consider as home performance companies grew out of existing businesses: mostly HVAC, a few insulation companies,” said Keith Aldridge, BPA’s CEO.

According to Aldridge, “whole house services” companies bloomed in response to utility subsidies for companies that would do that kind of work to drive down homeowner power consumption. Other companies organized specifically for home performance alongside the Better Buildings Program and American Recovery and Reinvestment Act’s (ARRA) implementation.

That is why, as BPA continues to better analyze the composition of its newly consolidated membership, Aldridge believes “most of them were organized as home performance companies — i.e., they did not start out as single-trade” companies.

Related, BPA is also continuing to build data on which regions of the country have been most responsive to HP offerings. The primary hurdle there is that the only areas of the country providing such info are the areas where utility programs have supported the industry. Aldridge knows that consumers in others areas have embraced HP in other areas as well, but specifics are hard to come by.

An additional incentive to build consensus on a definition of “home performance” is that different utilities define the term differently for the purposes of their respective programs. This not only creates an uneven set of opportunities but results in participant data that is less than apples-to-apples across the U.S.

“That said,” he continued, “the areas where we know of extensive HP activity are New England / New York, Arizona, California, and the Pacific Northwest.”

Aldridge is personally most familiar with the Southeast, and there, he recalls many HP contractors popping up and working successfully in areas that had not seen that type of offering before (or since).

“I believe this tells us there is pent-up demand for all sorts of home performance services, from whole house ‘audits’ (a term I hate, by the way — I like ‘assessments’ better) to HVAC replacements to renewables.”

Asked how workforce struggles have affected the HP community, Aldridge listed several familiar experiences and concerns, although he reported that “we probably have a greater shortage for non-technical skills such as sales, crew leader training, and general management than we do for the technical skills.”

In response to the perceived bias toward college degrees among students and parents, the BPA intends to work with many partners. These include the low-income weatherization program (“which has an extensive network that provides excellent technical training”), BPI, the community college network, and private industry, according to Aldridge.

Katie Aronoff, BPA director of marketing and communications, adds that a new Rising Leaders program will focus on those in the industry who are 30 and younger.

BPA also plans to create a new tier of membership for high schools, colleges, and trade schools to join and engage in benefits and services, Aronoff added. One benefit of this adjustment will be to get students involved by attending regional or national BPA events, along with providing blended learning opportunities for them.

MEANWHILE, IN THE FIELD

Elena Chrimat, BPI certified energy analyst and cofounder of Ideal Energy LLC in Phoenix, has her own take on the question of which regions respond well to home performance services.

“To be honest, I think everyone is receptive if the service is sold properly,” she said. “If it’s marketed as ‘home performance,’ there is no bite, as most people have no idea what that means. If you tie it to a pain point, it’s hard for people to not be receptive!” 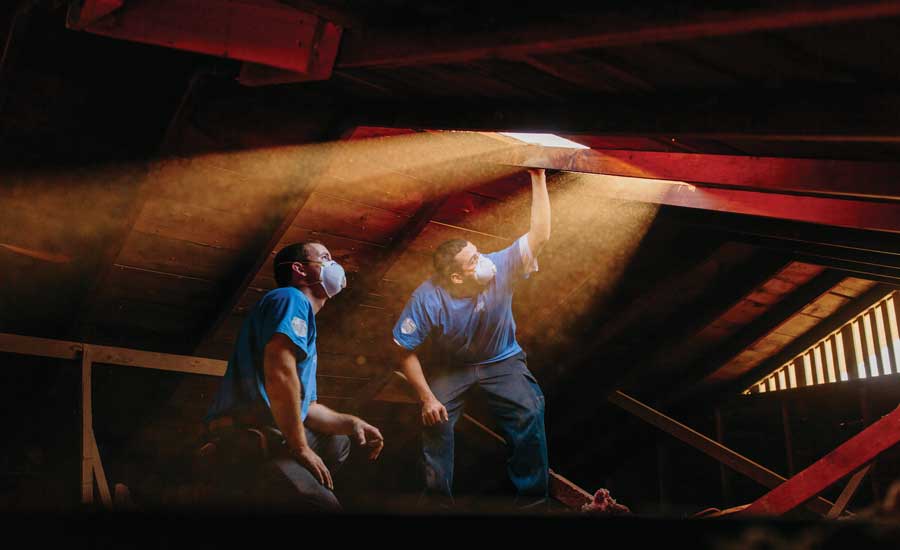 THREE PILLARS: Many home performance contractors do the envelope integrity and insulation work themselves but outsource the HVAC (or vice versa), and that is a mistake, said Elena Chrimat of Ideal Energy. PHOTOS COUTRESY OF IDEAL ENERGY LLC

Chrimat added that utility rebates certainly play an important role in making projects more cost-effective for the homeowner and thus easier to sell.

Beyond simple rebates, Ideal Energy is now involved in the most recent iteration of utility influence on HP services. A pilot program in the Phoenix area is dealing with demand response and the “duck curve” of usage.

“Staggering and shifting loads is something we will soon need to pay more attention to,” said Chrimat, who noted that the current wave of smart equipment, programmable thermostats, and water heater timers will play a role.

Chrimat commented that manufacturers and utilities need to step up and collaborate where necessary to help all involved overcome one challenge in this area.

“Most variable capacity communicating systems can’t work with other thermostats except their own, so this presents an issue when trying to set a home up to play the demand charge [avoidance] game.”

With HP opportunities traditionally grounded in existing homes, someone interested in this business space might wonder how much opportunity newer homes provide. Chrimat’s answer: Not all that much, especially in homes built after 2008.

“We actually don’t even do energy audits on homes built after 2006,” she said.

HVAC contractors may be surprised to learn that, according to Chrimat, “most home performance contractors are envelope and ductwork guys only” who may subcontract the other work. That makes sense when she relays that HVAC sizing, duct design, and system execution is the most technically demanding aspect of HP in general.

“Also, combustion safety (and moisture in cold or humid climates) throws some guys/gals through the ringer,” she added.

That specialization and parceling out of some of the crucial work is a key weakness in her eyes and a potential opening for those with solid HVAC backgrounds.

Ask Chrimat for the most important skills a successful HP contractor will have, and the answers are impossible to outsource: patience, perseverance, and passion.

Perseverance can be tested when the afternoon’s task is, in her opinion, the job’s most physically demanding: removing fiberglass batting from a hot attic. But over Ideal Energy’s years of operation, Chrimat has found that not only are the essential attributes intangible, but some of the upside is, too.

“We have dropped a few customers’ overall kWh usage by 55 percent just by doing home performance and installing a modulating zoned system on their home,” she said. “These homeowners are our champions. They actually go to bat for us! If their neighbors ever try to use another contractor for any a/c needs, they actually get involved and make sure we are their neighbors’ contractor.

“We also had a homeowner whose dying aunt had cancer and was living in their guest bedroom,” Chrimat recalled. “She had severe trouble breathing, and her room was extremely hot. We were able to help them achieve even comfort in every room, and much better indoor air quality after we were done! Pretty rewarding stuff.”

A RESOURCE FOR RESOURCES

Back in the world of HP contractor resources, those considering this side of the business can find a wealth of information at the Building Performance Institute (http://bpi.org). Its FAQ page lists a host of topics, certifications, guidance for HP-specific positions, and other resources.

In addition to the informational role and certification operation, BPI is an ANSI-accredited national standards development organization. To that end, BPI coordinates working groups and technical groups.

Contractors and others can draw on a current list of 16 BPI technical standards, ranging from home energy auditing to envelope and HVAC work. Standards with a narrower focus cover data collection, standardized predictions for whole-house energy savings, and multifamily building efficiency analysis.

With all those resources at hand, HP success may be a rewarding goal, but it likely won’t be immediate. And expect a learning curve.

Chrimat said a year was “about how long it took us to really understand the world of true home performance — how buildings are built and the common mistakes that contractors typically make that are the main causes of common complaints we received from homeowners.”

When her team wasn’t working, “we were trying to learn everything we could. I personally volunteered with our program sponsor in their weatherization program for a few weeks learning how to seal and run ductwork.”

Only after two years did Chrimat and partners finally realize “we could really offer a unique service in our market that would stick,” she said. “But it didn’t just stick on its own — we worked really hard in order to be the best at what we do.”

Today’s home performance industry is more developed but obviously still maturing, and it faces a new set of utility-related demands and opportunities. HVAC contractors with the right assets — tangible and otherwise — may be able to increase their share of revenue from (and increase their positive impact on) existing home stock that gets older and often a little less energy-efficient every day.