This website requires certain cookies to work and uses other cookies to help you have the best experience. By visiting this website, certain cookies have already been set, which you may delete and block. By closing this message or continuing to use our site, you agree to the use of cookies. Visit our updated privacy and cookie policy to learn more.
Home » HVAC’s Women Owners Represent the Past, Present, Future of the Industry
Business ManagementHVAC Residential Market

HVAC’s Women Owners Represent the Past, Present, Future of the Industry

From the front desk to the boardroom to the field, the evolution of women’s roles in the HVAC workforce has not only leveled the contracting field for those interested in ownership, business, or technical opportunities, but it has also created a thriving space for women to join the HVAC industry in the future at all levels. The NEWS got an inside look at what being a female leader in a male-dominated industry is like and what it means to be a woman in HVAC today.

As president of Amalgamated Services Inc., Frankfort, Illinois, Karen Riffice is a 40-year veteran of the mechanical contracting industry. She’s an entrepreneur at heart and holds multiple degrees, including a Bachelor of Science in accounting and a Master of Business Administration. She is also a graduate of the Advanced Leadership Institute through Babson College, Wellesley, Massachusetts, and she completed the Goldman Sachs 10,000 Small Business Program in Chicago. Before her current role, Riffice was CFO at a midsized HVACR and plumbing contractor. In her vast experience, Riffice has seen countless changes for the better in regard to women working in the HVAC industry.

“Years ago, a female attempting to enter the industry in any capacity — other than secretarial or perhaps accounting — was considered by the overwhelmingly male-dominated power brokers to be a laughing matter,” she said. “Today, however, the vestiges of this once pervasive attitude is hardly noticeable, and I feel my male peers consider me to be on equal footing in every respect.”

Riffice agrees that women wanting to enter the industry have the opportunity now more than ever, but she doesn’t see the field side of the trade to be as attractive.

“The white collar side of the business, however, has seen an upsurge in women working as project managers, accountants, bid proposal experts, and service managers,” she said.

As an owner, Riffice not only continues to advance her education, but she also advances her involvement in industry associations, federal contracts, and as a signatory with several trade unions. She warns other owners and those wanting to be owners about the constant business creep, as running a company gets into virtually every moment of the day, oftentimes even on vacation.

“I have learned that an owner simply needs to say, ‘OK, it’s 6 p.m. and I’ve been at it since 7 this morning. That’s enough,’” Riffice said. “It’s easier said than done, and it’s a constant struggle. I think the best approach is to tailor your duties as an entrepreneur, whenever possible, to becoming more of an owner and less of an employee.”

Danielle Putnam, president of The New Flat Rate, Dalton, Georgia, always wanted to be in business; she knew it since she was a little girl. 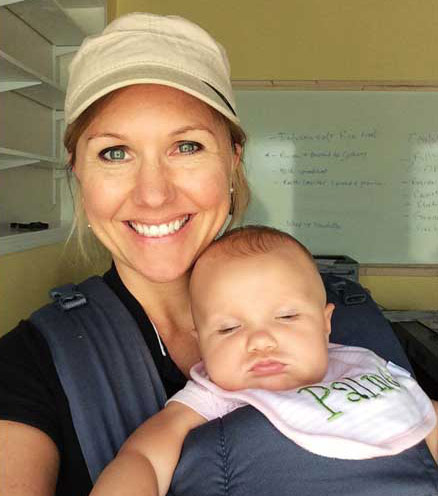 “I couldn’t wait until the day I owned a flip phone,” said Putnam. “That was my measure of success.”

Born and bred in the HVAC industry, Putnam’s father was a contractor, and she spent time working around the shop, answering phones, and mailing tuneup postcards in the summer. Over the years, the business experienced many feasts and famines, but her dad always pursued consistency in his business.

“In 2010, my dad and I took his ideas to the whiteboard and began discussing a pricing model that could help his business grow consistently and that could help other contractors,” she said. “In 2011, we founded The New Flat Rate, where today I serve as president.”

Since then, Putnam has been highly involved in the industry. She is currently serving as president of Women in HVACR (WHVACR) and recently gave the keynote address at the ninth Annual Celebrating Women in the Mechanical Trade Industry Luncheon, hosted by the Mechanical Trade Contractors of Arizona.

Putnam spoke to the women in attendance about “Shattering the Glass Ceiling.” The presentation was focused on ways women in the trades can achieve success, covering topics such as pursuing the HVAC industry, leadership, strategizing growth, and correctly passing the baton.

“HVAC responded to my dream of being a businessperson,” she said. “It allows me to grow as an entrepreneur, try out ideas, manage a team, and pursue excellence. HVAC is everything but a silo. It’s a jungle gym of career opportunity that is both business-professional and family-friendly.”

Putnam’s work-life balance can be chaotic at times, especially with two young children ages 4 and 2.

“The work/life balance looks different for women,” she said. “Especially if you’re a nursing mother. The minute I get home from work, I instantaneously switch gears into mom mode, often nursing a baby and cooking dinner at the same time, all while the toddler is hanging on my leg screaming for a snack and play time.”

Putnam wouldn’t change this part for the world, she said, but she looks forward to the days when she is not trying to simultaneously raise babies and grow a company.

“To keep things in perspective, though, I practice taking the wins,” she said. “Any small win is worth celebrating, especially when there are so many juggling balls that fall to the wayside.”

Putnam said that she doesn’t normally experience any issues with managing or integrating with the men in the industry. In fact, she has developed an interview strategy to help weed out men or women who don’t want to take direction.

“In every interview, male or female, our company policy is to ask the candidates to sing ‘Twinkle, Twinkle Little Star,’” she said. “Although naturally uncomfortable, it helps us determine the candidate’s ability to follow orders. If they won’t sing a simple song for me in an interview, then they certainly won’t follow my orders in the future — hence, they do not get a job offer.”

Debbie Reeves Dahl is the owner of Maki Heating & Air Conditioning in Auburn, California. She began in the HVAC industry in 1990 as a call center representative. From there, she moved into dispatch and operations management.

“I have always seen the need for customer service improvements in the home services industry, and I have a knack for this,” said Dahl. “I enjoy dealing with residential retrofit customers and providing service unlike what most contractors offer.” 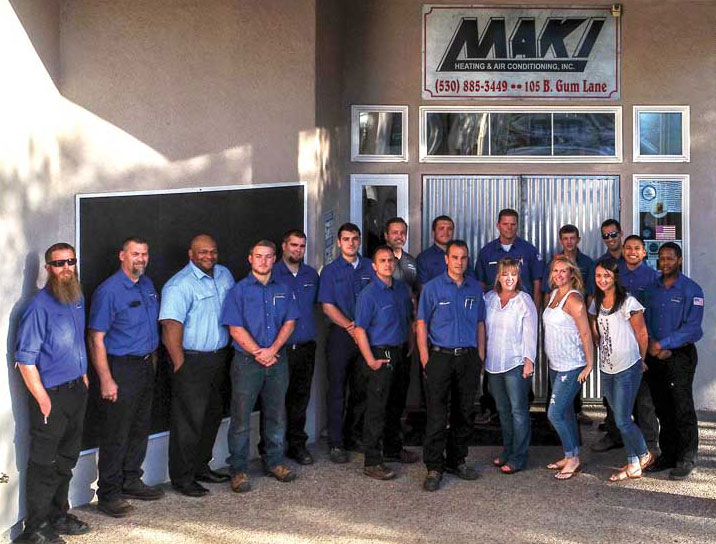 MUTUAL RESPECT: Debbie Dahl is the owner of Maki Heating & Air Conditioning in Auburn, California. Following the Golden Rule of treating others as she would like to be treated has made it easier not only to work with but also to manage male co-workers.

Working in a male-dominated industry, Dahl has found that following the Golden Rule of treating others as she would like to be treated has made it easier to not only work with but also to manage male coworkers. That doesn’t mean she hasn’t run into issues as a woman in the industry. In 2002, for example, Dahl won the president’s award while working for a large, national HVAC company. The company only had men’s rings to award, and she was given a man’s ring for winning top center that year.

“I couldn’t be more proud of that ring, though,” said Dahl. “It just doesn’t matter to me.”

She is working with both male and female managers in her company to mentor them in sales and marketing leadership. Not only does she look for the type of person who takes ownership of their work, but she is also looking for candidates to take ownership of the business.

“When I purchased Maki, I recruited Justice Feusi, a 23-year-old woman that I had worked with for years and who is currently my operations manager,” explained Dahl. “She will be a future leader in the industry, without a doubt.”

Dahl’s advice to anyone looking to advance their career in HVAC is to be a low-maintenance employee while generating high-activity output.

“My advice to women entering any trade field is to have thick skin. There will be co-workers, supervisors, customers, and supply house workers who don’t think a woman is capable of success ... They are not right. The industry is worth it, and you can do it.”
—Karen Lamy DeSousa
President Advance Air & Heat Company Inc.

Karen Lamy DeSousa is the president of Advance Air & Heat Co. Inc., East Freetown, Massachusetts. She joined her father’s commercial HVACR contracting company shortly after discovering that a trusted employee was embezzling funds, which crippled the company’s and her family’s finances. Fast forward 16 years: DeSousa’s father retired, and she has taken over the ownership and responsibility of running the business. 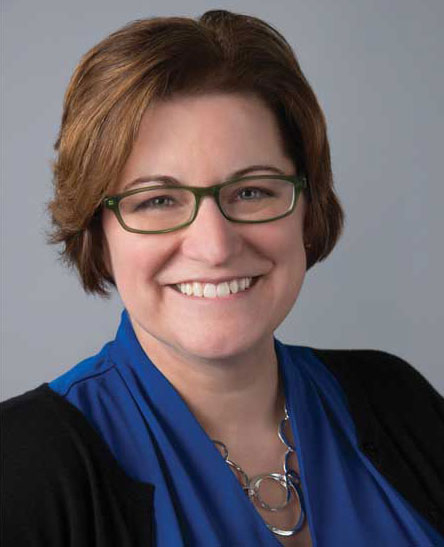 IT’S WORTH IT: Karen Lamy DeSousa, president of Advance Air & Heat Co. Inc. and vice president of Women in HVACR, has developed a thick skin while navigating the HVAC industry and suggests other women should, too, as they develop their careers in this rewarding trade.

“The HVAC industry is never dull,” said DeSousa. “The technology is constantly evolving; the needs of our customer change by the season, by the year, and sometimes by the hour.”

She takes the role of HVAC in everyday life seriously and understands that a failed refrigeration unit for a critical system can be the loss of hundreds of thousands of dollars, and the loss of heat in a nursing home can mean lives are at risk. Despite this, DeSousa struggled in the beginning of her career to convince the field technicians she managed that her lack of technical background wasn’t as much of a deficiency as they thought. According to her, this was more of a sticking point than her gender.

“I was blessed to have my dad as my mentor,” she said. “He was basically an HVACR legend in our area and also a brilliant teacher. I could ask him anything, anytime, and just be a sponge soaking up knowledge.”

She also found support in WHVACR when it came to things her dad couldn’t relate to, like being a woman in the HVAC trade. Currently, DeSousa serves as vice president of the organization and is working to not only to support those women who are already in the industry, but also to reach out to girls and young women who aren’t always considering the trades as an option for their futures.

DeSousa believes that anyone entering the HVACR field in the next three to five years has nothing but opportunity in front of them.

“My advice to women entering any trade field is to have thick skin,” she said. “There will be co-workers, supervisors, customers, and supply house workers who don’t think you belong, who don’t think a woman is capable of success, and will make you feel unwelcome. They are not right. Don’t get discouraged. This industry is worth it, and you can do it.”