This website requires certain cookies to work and uses other cookies to help you have the best experience. By visiting this website, certain cookies have already been set, which you may delete and block. By closing this message or continuing to use our site, you agree to the use of cookies. Visit our updated privacy and cookie policy to learn more.
Home » Five Steps to Success When Integrating Building Technology
HVAC Commercial MarketCommercial ControlsBuilding Automation Systems

New building automation requires learning the language and planning ahead

The next level of building automation is around the corner, and preparation is well underway for the continued transformation of the built environment. From how mechanical systems run to how the occupants interact with the building, HVAC commercial contractors are either going to find themselves at the brink of success or at the edge of failure. Where they end up depends on how they adapt to new building technology. Here are five steps to help navigate the approaching changes.

“HVAC contractors and technicians should be aware that tenant sophistication is increasing ... Granular room control will become the norm across the industry. One of the biggest hurdles to this will be finding the proper balance of technology and control to incorporate the preferences of all occupants within a space.”
—Robert Hemmerdinger
Chief sales and marketing officer Delta Controls

When the people spoke the same language at the Tower of Babel, the potential for success and the heights that could be reached were limitless. Take that concept and transfer it to the current environment in which buildings are being created and retrofitted.

“The buildings industry is on the cusp of a revolution, as technologies like 5G, machine learning, artificial intelligence, and natural language processing alter the way we control and connect smart buildings,” said Robert Hemmerdinger, chief sales and marketing officer at Delta Controls. “This creates the potential for more devices to work together within a building and increases the adoption curve of smart technologies, since all devices will be speaking the same language.”

Not only is there a jargon to learn with new technology, but there is also a new uniformity in the language that high-performance building technologies speak. Taking a look at the terms Hemmerdinger used, for example, 5G is already in its early stages. It is the next iteration of cellular networks. Literally translating to fifth generation, the speeds promised from this new network will change the pace of interaction through cellphones and any device connected to the network. This is important to the built environment for two primary reasons. The first is the rate at which data transfers from internal systems to the cloud and back to the system. Increased speed should improve the rate of response from network-based technologies. The second reason has to do with the broad adoption of cellphone usage and the demand of its users to interact through this device. This trend has already been evidenced in the residential sector as homeowners continue to demand to control and interact with their homes via cellphone and other voice-activated assistants. The trend is advancing further, and occupants are increasingly requesting the ability to interact with buildings in the manner that they are able to interact with their homes.

“HVAC contractors and technicians should be aware that tenant sophistication is increasing,” said Hemmerdinger. “Tenants want more control over their environments. Granular room control will become the norm across the industry. One of the biggest hurdles to this will be finding the proper balance of technology and control to incorporate the preferences of all occupants within a space.” 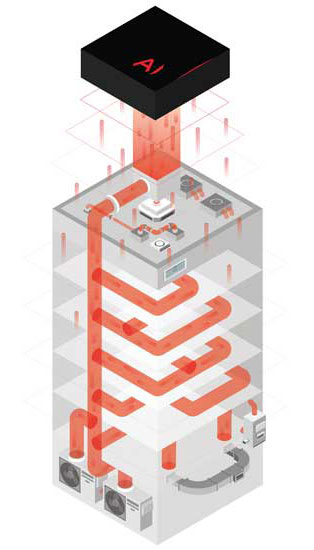 HVAC DESIGNED: BrainBox AI is the first autonomous AI technology for HVAC. Using advanced predictive control strategies with machine learning techniques, it has an artificially intelligent approach tailored to every building’s specific needs at any time throughout the year. PHOTO COURTESY OF BRAINBOX AI

“Automated intelligence chooses a predefined action based on a control loop or a sequence designed and hard coded by mechanical and controls engineers,” he said. “The building automation system is an automated intelligence system. The control logic that is currently applied in buildings is reactive using feedback loops.”

Artificial intelligence is the next step from automated intelligence. According to Venne, it includes learning, reasoning, and decision-making processes.

“Imagine a child who learns how to walk on solid ground and, one day, visits the beach where there is sand,” said Venne. “After a while, the child will be able to adapt their steps and learn how to walk on the sand. An artificial intelligence agent would be able to develop a similar approach to learning, while an automated intelligence system will keep ‘falling,’ because ‘sandy beach’ is not included as one of its predefined inputs.”

He pointed out that there is no learning process, and the machine is not physically capable of making a different decision than what is already programmed for it.

A driving factor for artificial intelligence in buildings is energy consumption reduction.

“The most noteworthy trend in high-performance buildings at the moment is the focus that is being placed on reducing energy consumption and carbon footprint,” said Venne. “In order to accomplish this, smart solutions are being installed along with a growing number of data-capturing IoT devices. As we move forward and introduce renewable energy sources into our building, [in addition to] our increased desire to provide comfort for an increasingly demanding occupancy, there is a paramount need for self-adapting, autonomous, and evolving buildings.

Maintenance contracts are part of the lifeblood of many HVAC companies, residential and commercial alike. The increased adaptation of BAS, IoT, and artificial intelligence to the high-performance building market is pushing the current maintenance model to a new frontier.

“In the next five to 10 years, system insight and continuous diagnostics will become the standard expectation of customers,” said Jonathan Biagiotti, product marketing manager for Augury Inc. “The industry will implement more performance guarantees into their contracts (i.e. full-risk models, rather than the current model of paying every time a new repair is needed).”

This can be accomplished via services and products that move beyond the raw data that is supplied from systems and provide what is called data-driven insights. These are the continuous diagnostic solutions that companies like Augury provide.

“With remote continuous monitoring and diagnostics, you can reduce or eliminate truck rolls to facilities to diagnose machinery and can make repairs at early stages when it is cheaper for everyone involved to fix,” said Biagiotti. “In the case of one of our customers, that type of predictive arrangement with their client saves their client approximately $250,000 in HVAC repairs.”

The adoption cycle of new technology is varied among contractors and customers alike. For some it is financial; for others it is fear. At times, a promising technology doesn’t deliver on its promises and leaves a bad taste in both contractors’ and customers’ mouths.

SOFTWARE SOLUTION: This chart is an example of the data analysis that comes from the Optimum Energy HVAC system optimization software that works as an overlay to the BAS. It analyzes data in real time, and patented algorithms determine how the building or system can operate more efficiently. ILLUSTRATION COURTESY OF OPTIMUM ENERGY

SOFTWARE SOLUTION: This chart is an example of the data analysis that comes from the Optimum Energy HVAC system optimization software that works as an overlay to the BAS. It analyzes data in real time, and patented algorithms determine how the building or system can operate more efficiently. ILLUSTRATION COURTESY OF OPTIMUM ENERGY

“Sometimes new technology is not well-received and adopted by the workforce or does not have the expected impact,” said Ian Dempster, senior director of Product Innovation, Optimum Energy. “I have seen systems implemented with the latest technology and then get ignored or disconnected because the people using it were not consulted or trained in the new technology.”

He cautioned contractors to be aware of actual uses and limitations of technology as they endeavor to remain current with high-performance building trends, as well as to educate their customers. Dempster noted that investing in technology can be a tricky business and that contractors should avoid leaping into products that don’t have a sustainable ecosystem around them.

“One example is blockchain [an open, distributed ledger that can record transactions],” he explained. “There have been many articles and much hype about how it will have a major effect on the building industry, but, to date, it has had very little impact. On the other hand, machine learning and artificial intelligence are having a large impact, in both operations and efficiency improvements.”

“With the introduction of AI technologies to the built environment, building technicians will no longer have to focus on mundane tasks, as AI will take care of that for them,” he said. “This will give them the opportunity to work on addressing more impactful issues and adopting the role of AI coach.”

Dempster said that data on building performance will be more widely available and sharable to all building disciplines, allowing for faster decisions and implementations.

“Operators and facility managers will see more of their systems automated and will be able to view status, alarms, and issues in real time,” he explained. “Systems will continue to get more efficient but will require more automation to operate systems holistically at their greatest possible efficiency.”

Biagiotti warned that the increase of customer expectations will demand more sophisticated services.

“Because of this demand, we will see a lot of consolidation of smaller firms in the industry,” he said. “The best thing a contractor can do today is to invest in their own capabilities to scale by providing superior diagnostic services through technology.”

“HVAC contractors of the future may find themselves spending a larger part of their time reviewing data sets before coming on-site for a repair or maintenance visit,” he said. “In the years ahead, contractors may have a direct line into their clients’ building management system, which may leverage predictive capabilities to notify a contractor before an HVAC problem arises.”