In the nearly two and a half years since The NEWS’ article “HVAC Contractors Struggle with Rising Health Care Costs,” what has changed? A recent check-in with two participants from that story, along with another well-established contractor, demonstrates a couple of key points.

Primarily, management consistently wants to provide good coverage for employees and their families. However, that journey from intent to reality often takes a different path for each contractor, and it is never simple or inexpensive.

Steve Saunders, who commented for the previous article, is CEO of Tempo Partners in Dallas. He described the last three years as “very interesting.”

“We have changed carriers once,” he said, “for a slightly lower increase.”

Tempo has seen two years of increased plan usage, followed by a drop in claims that the company hopes will typify the norm.

Butch Welsch, president of Welsch Heating & Cooling in St. Louis, has not changed plans since speaking to The NEWS in 2016. The company employs a mix of union and nonunion personnel, and Welsch has been a trustee of a self-insured plan that has served the nonunion portion of his workforce for over 40 years.

“We had a 5 percent increase the first of 2019,” he reported, “which is the first increase in three years. We have managed to contain costs without decreasing benefits by extremely careful management.”

Meanwhile, Isaac Heating & Air Conditioning of Rochester, New York, has stuck with its plan for at least the last four or five years. Eric Knaak, vice president and general manager, described it as including a high deductible but also a health savings account (HSA). Options have narrowed some in recent years.

“Two years ago, we did have an ultra-high deductible for those who wanted a lower premium and who felt healthy enough or who didn’t have dependents.”

If this trio represents a fair snapshot for 2019, employer contribution toward employee health insurance sits around 70 percent, with some differing details.

Nonunion employees at Welsch receive a 75 percent subsidy from the company. Welsch noted that this covers employees and their families if a spouse has no coverage elsewhere. It may be on the high side of the industry range, Welsch said, but “most of our employees are very long-time employees, and we feel this is a proper way to reward them for years of service.”

Tempo pays between 65 and 75 percent, said Saunders, with options including employee plus spouse, plus a child, or a family plan.

Saunders sees it as a big expense but a tremendous benefit to employees.

“We believe that it helps attract and retain good technicians,” he said.

At Isaac, the premiums and the employer contribution depend on whether the employee selects the single, two-person, or family plan. On average, Knaak said, the contribution is around 65 percent, but in addition to that, the company makes a weekly distribution to each HSA.

“If we chose to only offer the ultra-high deductible plan,” he observed, “we could probably cover 75 to 80 percent of the premium if not more, but our employees would have to pay more out of pocket. What’s fair and just?”

FROM THE OTHER SIDE

“We adjust our monthly safety training based on the hot topics that we are facing, and we have adjusted our personal protective equipment program based on occurrences and feedback from our field staff.”
—Eric Knaak
vice president and general manager Isaac Heating & Air Conditioning Rochester, New York

Another possibility for reducing the burden of premiums for employees (and employers) is to bring a healthier group of individuals to the risk pool.

When the group in question largely comprises HVAC contractors, that leads to a certain set of common issues.

“Back strains and soft tissue injuries are the most prevalent,” said Knaak, “followed by cuts, scrapes, bruises, and occasional eye injuries. [These tendencies] don’t impact our plan selection, but it does impact our safety training and safety planning. We adjust our monthly safety training based on the hot topics that we are facing, and we have adjusted our personal protective equipment program based on occurrences and feedback from our field staff.”

Modern health insurance strategies may also include tactics that did not even exist at the turn of the century.

Isaac Heating & Air Conditioning has added a benefit where, for $40, the employee can video chat with a doctor for minor issues in an effort to further curb expenses.

Isaac also offers annual biometric screening for everyone at the company, whether they are on the company’s insurance or not. 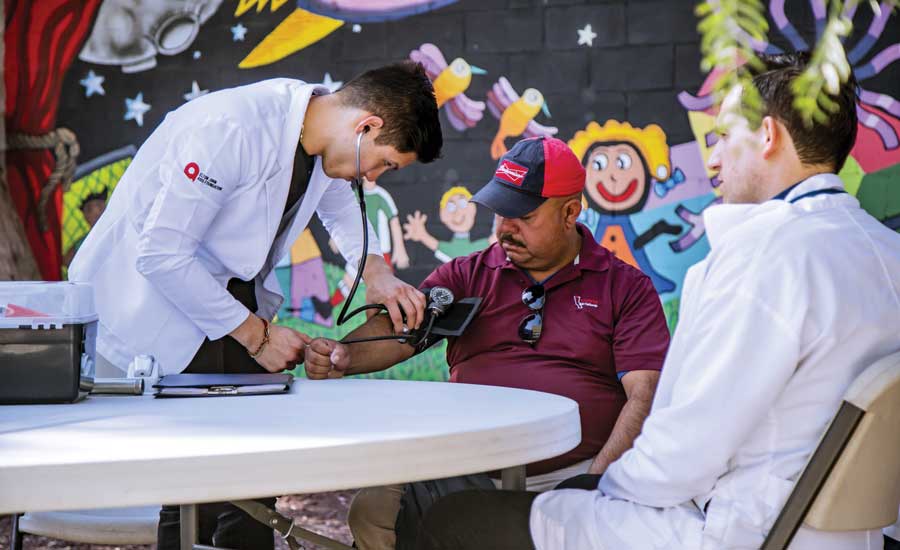 EARLY WARNING SYSTEM: Tactics like health fairs, incentives for yearly bloodwork, and video access to doctors can serve to identify some issues before they become more dangerous (and expensive).

“The 32-panel blood test needs to be reviewed with their doctor,” Knaack said, “and then those who participate receive a significant reduction in their premiums. We also offer lunch-and-learn programs that address health, nutrition, and medical care.”

Saunders described an arrangement with Tempo’s health care provider where employees can contact an independent consultant who knows Tempo’s coverage. The idea is that this resource can help people determine which of a couple of similar provider candidates might be the more cost-efficient choice in a given instance. The consultant can also advise on how to “get the right service first,” according to Saunders, saving time and money for all involved.

On the other hand, Welsch Heating & Cooling takes its wellness initiatives to the zoo.

“We have an annual Health Fair at the St. Louis Zoo where we provide health tests, blood tests, and a number of routine procedures at no costs to the participants,” Welsch said. “We have over 1,000 attendees participate and typically find several cases where some preventive work can be done to avoid bigger problems later on.”

Furthering the company’s belief in the old “an ounce of prevention” adage, which Welsch sees as “probably more true now than ever,” the contractor offers partial benefits to employees who demonstrate use for their fitness club memberships. It does the same for smoking cessation methods.

Rx AND OTHER RISKS

And then there are the drugs.

“The drug problem is a huge problem,” said Knaak, referring to both illegal drugs and legal drugs used illegally or improperly. “The country’s medical establishment needs to get a handle on this and start making wiser decisions.”

In addition to the increasing costs of prescription drugs, Welsch also cited the upward trend of the quantity of prescriptions issued in general as another challenge for cost containment. And Knaak added a related perspective.

“A prescription for something that can be handled with a change in diet, exercise, or habits is not a solution — it only exacerbates the problem,” Knaak said. “We need to all take more control of our own health.”

He is proud that Isaac has seen some benefit from its educational and preventive efforts: Employees have seen no increase in their own premium cost over the past two years. Education is another key.

“The better you understand the costs, the more able you are to maneuver a high-deductible plan,” Knaak said.

National discourse on the topic of health care remains split, with advocates ranging from decoupling insurance from employers altogether to others working toward more of the pre-Affordable Care Act status quo with regard to plan requirements and insurer latitude.

As it stands, these contractors must invest significant thought and administrative energy to provide health insurance coverage for their employees and their families. They take the task, as onerous as it may be, very seriously because the effects of their policies and decisions are anything but abstract.

“We have had two long-time employees require treatment for cancer,” recalled Welsch, “and know that it is a blessing that we have maintained such comprehensive coverage.”

So they keep at it. Isaac maintains a close eye on health care costs as a part of preparing budgets and determining overhead — “we could easily price ourselves out of the market otherwise,” Knaak assessed.

In Dallas, Tempo has changed brokers and started pursuing the self-insurance route, similar to Welsch’s plan for nonunion employees. Saunders expects that process will improve coverage, incentives, and health at the company.

“Our total health care spend is over $2 million dollars,” Saunders said. And yes, he confirmed, “that is a number that will get your blood pressure up if you are not careful.”