Products that can help technicians do their job more efficiently

When it comes to useful tools, the HVAC industry will likely never be at a loss. From digital and wireless technology to basic screwdrivers and wrenches, each tool can help an HVAC technician do their job more effectively and efficiently. With new products being released almost every day, The ACHR NEWS asked a few contractors to share their current favorite or “must-have” tools.

Although the “must-have” tool can vary depending on the job, Bryan Denhof, service manager at Pleune Service Company, said he would rank cordless impact drivers as his No.1 and multimeters as a “close second.” He mentioned that a few of his colleagues prefer Milwaukee Tool and Makita for their impact drivers, while opting for Fluke when it comes to multimeters. He added that Fluke’s 116/323 kit covers most things encountered by field technicians, which makes it a popular option.

“The latest industry hype seems to be focused on the digital gauge manifold kits,” Denhof said.

While he agreed that digital products do take the “figuring” error potential out of the equation, Denhof explained that “old school” gauge manifolds force younger technicians to learn how to use the tool properly, rather than just looking for the answer on a display.

A company’s top tool can sometimes correlate to where the business is located, and for Michael Petri, owner of Petri Plumbing & Heating, operating in New York City often means working with hydronics and steam heat. He said his employees are typically supplied with litmus paper to make sure the pH value of the water within the heating systems is balanced.

“We also have a multitester, so we can test the electrical continuity going through all the controls,” he added.

Even though technicians might pay more attention when choosing specialty tools, Petri said they should never overlook their basic hand tools. Channellocks (tongue-and-groove pliers), flashlights, and four-way screwdrivers are only some of the essential tools that every tech should have at their disposal, he said.

“No one checks air flow. More people are starting to check static pressure, but none of that matter if you don't have the right airflow.”
Rob Minnick
CEO and president, Minnicks

Sometimes, some of the most useful tools can be overlooked, and Rob Minnick, CEO and president of Minnick’s, said airflow measurement tools are one of the most forgotten.

“No one checks airflow. More people are starting to check static pressure, but none of that matter if you don't have the right airflow,” he explained.

Minnick added that when a system is supposed to have 1,000 cfm coming across and only 400 cfm does, even though the static pressure might look good, the airflow is not reaching its maximum potential. He said none of those other measurements matter until the airflow is measured first.

When it comes to digital manifolds, Rett Jones, general manager of Air Force Heating and Air and Air Pros USA – Georgia, said Fieldpiece’s SM480V SMAN digital manifold is a “fantastic” option. He said not only can it read pressures, but it offers digital readings that can be directly emailed to whoever needs it. He added that to be considered the “best of the best,” technicians should also have a manometer on hand.

“If you're not testing the static pressure of the duct systems, there's no way you can actually do your job effectively,” Jones said. “[It’s like] if a doctor says I have high blood pressure — we've got to make sure that that's caught because it can cause other problems.”

He said although there are times when traditional gauges can be useful, digital gauges are more convenient when working in commercial settings. Jones recommended going to trade shows and conventions to learn more about the newest tools. 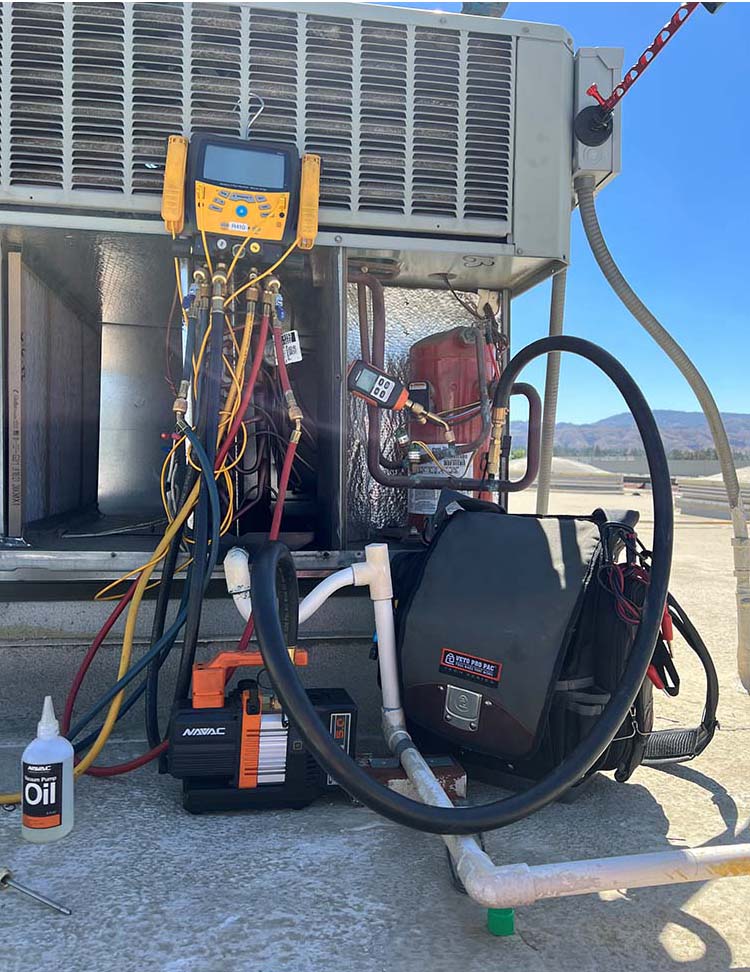 TOOL BAG: Having a good-quality tool bag can help keep products organized on the job.

When it comes to service tools, Colby Ballard, owner of Lasting Legacy Plumbing, Heating & Air, said he would have to choose between his NAVAC NP2DLM Cordless Vacuum Pump or his Fieldpiece multimeter. He explained that when he’s on a roof with no power outlet or ability to run an extension cord, the battery power in the NAVAC vacuum pump is “phenomenal.” He said when it comes to digital tools, even though they cost more money, they can save technicians time on the job, which is a gamechanger for productivity.

For maintenance calls, Ballard recommended Nu-Calgon’s coil gun sprayer. He said he often uses on the sprayer in combination with the company’s blue Nu-Brite cleaner to clean condenser coils. He also stressed that having a good-quality tool bag is a must.