Reasons to Offer Zoning on Every HVAC Job

Zoning remains a small but growing segment of the overall HVAC market, representing less than 5 percent of equipment sales.

“In terms of 130 million-plus housing units, it’s a much, much, much lower percentage,” said Dick Foster, president, ZoneFirst.

Manufacturers in the zoning market are working to turn that around by educating contractors and homeowners on the benefits of zoning to each party involved.

1. It increases profit margins for each job it’s installed on.

Adding zoning to a project increases profit margins for contractors by about 25 to 30 percent, Foster said.

Yet during training sessions, Foster routinely gets feedback that zoning is too expensive or too much work.

“I’m making a blanket statement, but the majority of contractors do not understand zoning, do not believe in zoning, or are not interested in zoning,” he said. “It’s still an industry that’s yet to really accept what zoning can do, in terms of adding comfort.

“Car dealers sell more zoning than HVAC guys,” Foster continued. “I’ve got more zones in my car than I do in my house — passenger, driver, two seats in the back — and no one has a house as small as a car. Plumbers … every boiler that goes out, pretty much 95 percent of them have circulators, zone valves. We need to slow down and talk more about this.”

Jackson sees the most interest in zoning from contractors who are all-in with the technology.

“I’ve spoken with contractors at trade shows who flat-out will not do zoning,” he said.

Those who do zoning from time to time have a very limited understanding of how it works … with dampers, bypass issues, and new smart home technologies, Jackson said.

However, contractors who do a great deal of zoning see the benefits of it for the homeowner as well as their own bottom lines.

“Zoning is a great way for contractors to increase their bottom lines by offering a solution that can save the homeowner money and bring overall comfort throughout the home,” Jackson said. “The other point we like to discuss with contractors is the comparison between installing two complete HVAC systems versus selling one system with zoning. In most cases, the proposal with one system and zoning will be a fair amount less, while still being able to make the same amount of money.”

Contractors aren’t salespeople, Foster said, although they can be; he’s seen a contractor routinely selling $6,000 to $8,000 zoning systems for homes in Illinois.

“The problem is, most people buy heat or air conditioning when it breaks, and most contractors are more interested in getting in and getting out,” he said. “What’s an air conditioning business supposed to do? — Make money. You have the polar vortex, and what happens when it warms up in a couple weeks? They’re twiddling their thumbs. How you stay busy all year round is, offer things a homeowner doesn’t have. That way, you differentiate yourself from the guy down the street.”

2. It increases comfort for homeowners (and increases word-of-mouth advertising when they love it).

From the homeowner’s side, Rick Wilson, director of sales and marketing, Arzel Zoning Technology Inc., believes the biggest obstacle to zoning becoming mainstream is awareness.

“Most homeowners aren’t aware that an economical, retrofitable solution even exists,” he said. “They move into a house and either tolerate or avoid the uncomfortable areas.”

There’s no maintenance required, it’s usually installed in less than a day into existing ductwork, it’s not visible, and it doesn’t require additional power.

“And now, there’s no Snuggie, no blanket,” Foster said.

That’s because the thermostat won’t be on the other side of the house, he said. Or in his (least) favorite place: the hallway.

“How many people live in the hallway?” he quipped. “You don’t!”

“Most homebuilders want to offer upgrades that potential buyers can see and not feel: kitchen cabinets, wood floors, bathroom fixtures, etc.,” he said. “They are not promoting HVAC upgrades.

“On the other side, we need to get the homebuyer to become more aware of the comfort upgrades that are available to them that provide a healthy and comfortable living environment that will enhance their day-to-day living,” Reilly added.

OEMs recommend bringing up zoning on every job where it’s applicable — particularly when changing out a furnace and air conditioner — to the point where the ask becomes automatic.

“When you go to McDonalds and you ask for a cheeseburger, they ask, ‘Do you want fries with that?’” Foster said. “We should be saying, ‘I’m putting in a new high-efficiency furnace or air conditioner; do you want us to zone it?’”

He suggested starting out by asking the homeowner to point to their thermostat — then asking if it’s their only thermostat, and if there are rooms that are too hot or too cold.

“You have a light switch for every room in the house, but you only have one thermostat,” he said. “Doesn’t it make sense to zone it and heat just the bedrooms [at night]?”

Wilson recommended looking around for clues that the occupants are not comfortable, even before asking any questions. Is there a window a/c unit installed? Do they have rooms shut off or unused? Are they using fans to stay cool?

“It is scientifically proven we sleep better in cooler rooms; you will sleep better and feel better if your bedroom is zoned,” he said. “Every master bedroom should have its own thermostat.”

“Eighty, 90 percent of your gas bill is all for heating,” Foster said.

“When you cut that by 30 percent by not heating the whole house, we can save a lot of energy. Yes, there’s cost to add it, but it will save you energy versus two separate systems.” When real estate is reassessed, a homeowner’s going to end up paying a lot more in taxes for a house with two units (one per zone), versus a house with one unit and three zones, he said.

Jackson recommends that contractors also keep an eye out for connected technologies in a customer’s home and offer to bring their heating and cooling online through connected thermostats.

3. Smart technology makes it easier than ever to install.

Smart technology is advancing zoning at a rapid rate, with manufacturers offering app-controlled devices and connections to other smart home devices. 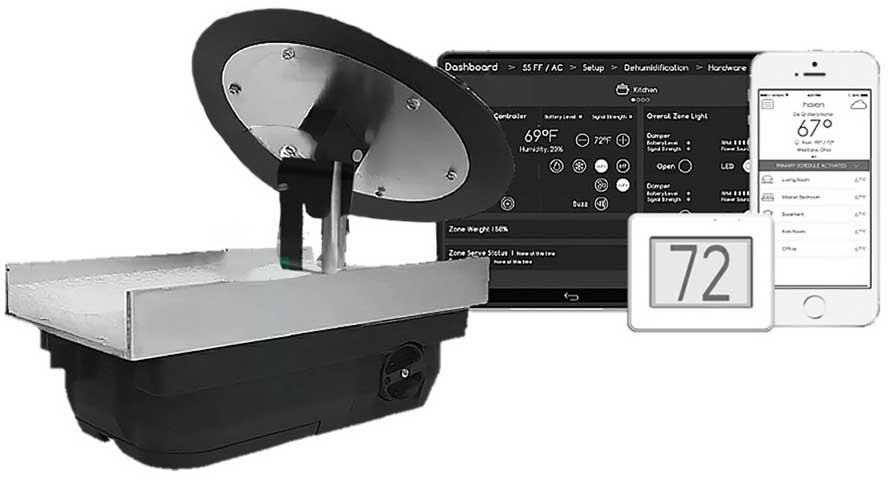 APP: Haven, Arzel’s wireless, app-driven zoning system, features a damper that generates and stores its own energy. The app allows the installer to monitor and adjust functions from a tablet, and the consumer to adjust each zone’s temperature to meet the unique comfort level.

“With our app, contractors will be able to set up and install the system quicker than before,” Wilson said. “Using energy harvesting technology to power the dampers, our dampers eliminate the need for batteries or power wiring, making the installation even faster. If a problem arises, our system will alert the installing contractor of exactly what the issue is before arrival, saving the homeowner time and money.”

Using a computer or mobile device, homeowners and contractors can control individual zones and see all of the temperatures, set points, and schedules remotely.

Additionally, sensors can detect when someone is in a room/area and automatically adjust the temperature without human interaction.

“This allows them to have better control over their indoor environment and increase their comfort,” Jackson said. “From the contractor’s view, they are able to obtain data that helps them troubleshoot and keep equipment running at optimal efficiency” — for example, using the contractor interface of a zoning app to see both the discharge air and return air temperatures. 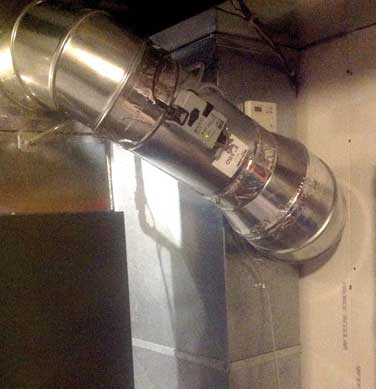 BYPASS: Mike Reilly, EWC Controls, said the biggest advancement in zoning is in smart bypass technology. “Contractors can now install bypass dampers with 100 percent confidence in their sizing and calculations of that install, while also eliminating over 50 percent of the time to install a bypass damper,” he said.

Reilly said the biggest advancement is in smart bypass technology.

“Contractors can now install bypass dampers with 100 percent confidence in their sizing and calculations of that install while also eliminating over 50 percent of the time to install a bypass damper,” he said. “The technology advances have made the contractor’s job easier and faster, once they learn how to use the technology at their disposal.”

Growth estimates are strong due to the OEM brands integrating zoning options into their equipment offering, he said.

“It will be a slow increase to reach 20 percent or 25 percent, but it is believed that is where we are headed,” Wilson said. “We will continue to see an increasing interest in zoning over the next five years and beyond, partially due to the popularity of the mini split, but also, many builders are including it as an option in the new construction market.”