After a big 2018, the company has a lot to look forward to

At the 2019 AHR Expo in Atlanta, Jackson said the company is seeing more and more building owners and facility managers investing in building system integration in order to connect, monitor, and control HVACR, fire, security, and life safety systems from a single platform.

“In fact, our annual Energy Efficiency Indicator survey results show that 68 percent of respondents plan to implement building system integration in 2019,” Jackson said. “That’s a 23 percent increase in respondents planning to invest in 2019 compared to 2018 — the largest increase of any measure in the survey. We also expect to see continued integration among building technologies. This is increasing rapidly.”

There is a lot Johnson Controls is looking forward to in 2019, Jackson noted. At the top of that list, the company is excited about building out its digital solutions offerings.

“This involves working closely with customers to first understand their challenges, and then employ transformational thinking to co-innovate ways to solve them,” Jackson said. “We use data from the customer’s own environment — building systems and external sources — to uncover insights, which solve challenges and, most importantly, help our customers achieve their business missions.”

With efficiencies reaching as high as 21 IEER, these products comply with requirements set by the U.S. Department of Energy (DOE), ASHRAE 90.1-2013, 2015 International Energy Conservation Code and the Consortium for Energy Efficiency’s Advanced Tier.

“There are a number of other folks offering those efficiencies, but where we differentiated is we actually maintained two refrigeration circuits,” said Eric Newberg, director, commercial product management, Ducted Systems, North America Building Technologies & Solutions, Johnson Controls Inc. “So, if you ever were to develop a leak, half of your system is still operational.”

Johnson Controls is utilizing multistage compressors made by Emerson in both of these rooftop products.

“Everything we do on our equipment is based on Smart Equipment controls,” Newburg said. “Every unit has an incredible brain in there — our equipment doesn’t even really need thermostats. There’s enough technology built in there that, with a couple of sensors operating down in the space, we can actually take over control of the unit and maintain temperature and humidity control. Additionally, that brain allows us to tie in a cost-effective building automation system because everything is already set up to work with Verasys. By having that brain in there, we give ourselves a ton of flexibility.” 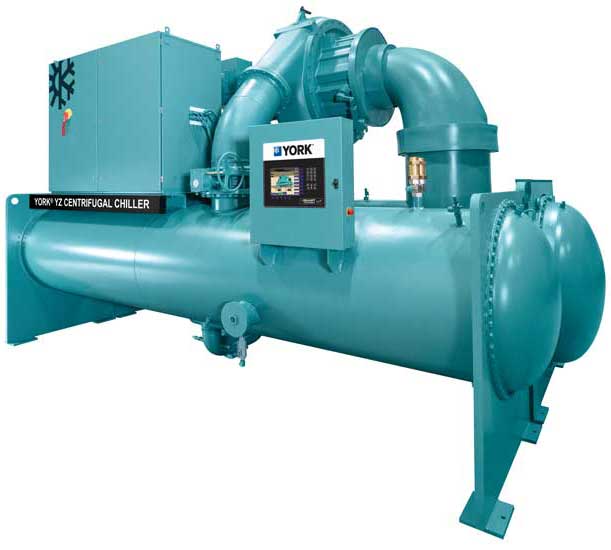 EXTENDED CAPACITY: Johnson Controls extended the capacity range of its YorkK YZ Magnetic Bearing Centrifugal Chiller to include chillers beyond 1,000 tons (3,516 kW), now up to 1,350 tons (4747 kW) of refrigeration.

“Metasys has always delivered a strong integration platform, but we’re really excited about how easy we’re making it for customers to integrate both HVAC and non-HVAC systems into Metasys 10.0,” said Chris Eichmann, vice president and general manager, Global Controls Products, Johnson Controls. “Providing our customers with access to critical system data from a single, intuitively-designed interface makes it faster and easier for them to do their jobs.”

Additionally, Johnson Controls announced the extended capacity range of its York YZ Magnetic Bearing Centrifugal Chiller to include chillers beyond 1,000 tons — now up to 1,350 tons of refrigeration. It uses an integral, variable-speed drive and advanced magnetic bearing technology that features a single moving assembly suspended in a magnetic field that does not require lubrication.

On the residential side, Johnson Controls showcased its Guardian brand condensing units.

“Typically, R-22 systems now might have a compressor failure,” Belthazor explained. “At that point, the homeowner or property owner/manager is faced with replacing the compressor of that unit — which has a very short warranty — or replacement of the entire system with an R-410A system, which can be costly. With this option, they can remove the outdoor unit with the failed compressor, install this new unit, flush the lineset, and they don’t have to change out the indoor coil or metering device in most cases.”

The Guardian brand units feature up to 17-SEER performance.

Additionally, the heavy-duty compressor provides pressure and temperature protection, plus the permanently lubricated fan motor does not require annual servicing.

“This is a really good, middle of the road option,” Belthazor said. “It’s especially valuable in the cases where it’s unexpected — like hurricanes, for example.”

Though the product is several years old, Johnson Controls has refocused on it with R-22 continuing to be phased out.