This website requires certain cookies to work and uses other cookies to help you have the best experience. By visiting this website, certain cookies have already been set, which you may delete and block. By closing this message or continuing to use our site, you agree to the use of cookies. Visit our updated privacy and cookie policy to learn more.
Home » Shurtape Products Help HVAC Contractors Cover Their Bases
HVAC Residential MarketHVAC Light Commercial MarketHVAC Commercial Market

ATLANTA — Using the wrong tape on a job can leave contractors in a sticky situation when the building inspector comes to pay a call. That’s one reason why Shurtape is seeing an increase in demand for tape that’s UL listed — or “red-letter tape,” as it’s often called.

Two of Shurtape’s featured products at this year’s AHR Expo were UL 181A-P and B-FX Listed AF 100 foil tape and AF 100E, a version of the same tape with a split liner that allows HVAC technicians to remove the tape’s liner more quickly. While they’re not new products this year, Lisa Zierfuss product manager, HVAC and building and construction at Shurtape, said the demand for UL-listed tape is increasing.

“You can have something listed A-P, or you can have it listed B-FX: those are the two most common for tape,” she explained.

“Codes vary amongst counties, between cities, states,” Zierfuss said. “Contractors seem to want to use a UL-listed product because they can use it anywhere, and they know it’s going to meet that code compliance. Inspectors realize that in order to be UL listed, the tape has to go through a very rigorous testing process. They’re going to go in and see the ductwork wrapped in this printed tape — they almost always call it red-letter tape — it meets all the codes, it’s UL listed, it’s good to go.”

Red-letter tape keeps the bases covered with one product, she said. 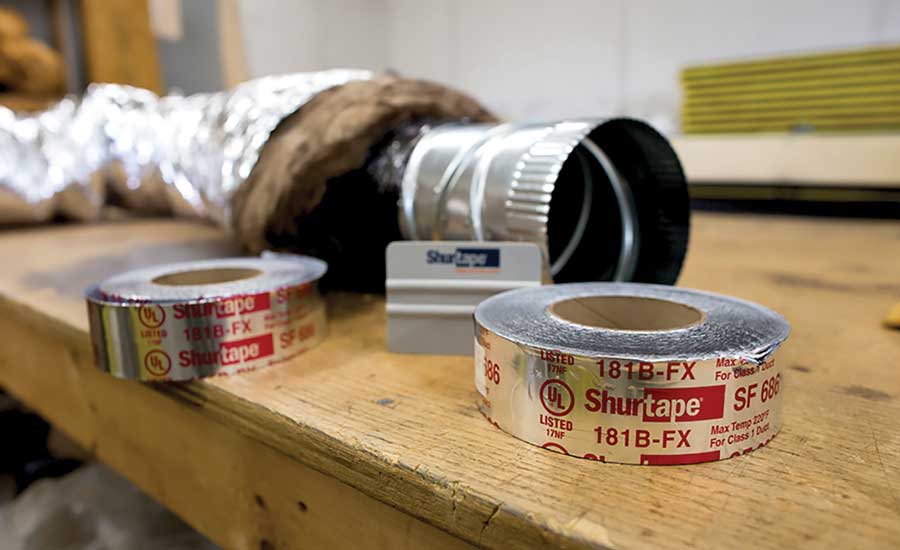 COVER THE BASES: UL-listed or “red-letter” tape is increasing in popularity among contractors who want to make sure their work passes inspections but don’t want to lug around dozens of rolls of tape in their truck.

“A lot of guys, they don’t want to carry 18 rolls of tape in their trunk, so even though this is more expensive than plain foil tape or plain cloth tape, they know they can use it and it’s going to pass inspection.”

Also featured at the show was the FF 100 film tape, designed specifically for seaming and sealing reflective insulation, an often-challenging surface for traditional tapes to stick to. Launched last year, FF 100 is built to deliver quick stick to reflective insulation and withstand numerous thermal cycles to provide full system closure for the life of the system.

“We’ve heard from contractors who use reflective installation … and they could not find a tape that would stick,” Zierfuss said. “We developed this to seal reflective insulation. It’s got a good adhesive, so it performs well on a wide temperature range … and it’s more robust than rubber adhesives, which are normally found in traditional black duct tape.”

Other products at the Shurtape booth included DC 181 film tape for use on Class 1 Flex Duct; a full portfolio of HVAC tapes, including those built specifically for use in cold temperatures (AF 914 and AF 975), as well as Shurmastic butyl rubber adhesive foil tapes (SF 685 and SF 686) designed for airtight and moisture-free sealing of Class 1 Flex Duct, sheet metal, and duct wrap vapor barriers; electrical tapes, from economy to professional grade; and a variety of general-purpose and industrial-grade tapes, including cloth and duct tapes.

If that sounds like an overwhelming array of choices, Shurtape has a website called Tape University to help explain the options. 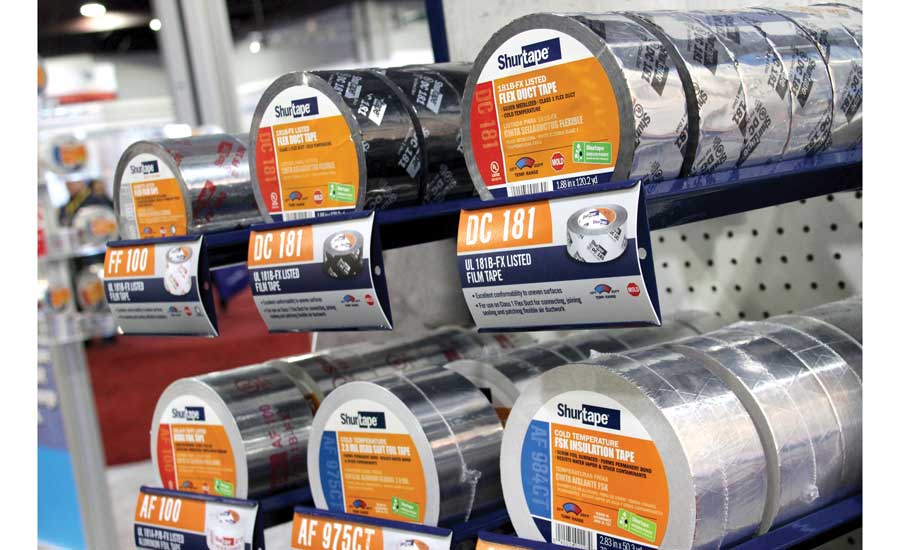 ON DISPLAY: Shurtape’s booth included a wide variety of tapes as well as merchandisers designed to display them. “Everyone throws tape on the bottom shelf, and they don’t think about it until they need it,” said Zierfuss.

“It’s not heavily Shurtape branded; it’s more of how to use foil tape, how to use HVAC tape, and … people can write in and ask questions,” Zierfuss said.

If the Shurtape team hears the same types of questions being asked over and over, the company will write up a blog post on that kind of tape use.

“I think a lot of people feel embarrassed to ask a question, like, ‘I’m the only one that doesn’t know this,’” she said. “You’d be surprised: Often, everyone has the same question.”

“We choose three students and assign them 10 HVAC-themed missions,” Zierfuss said. “It could be shadow a local contractor for a day, see what life on the job is really like; ask your class instructor why they got into HVAC and why they became an HVAC instructor. They get 10 missions and earn $500 for each mission, and they can earn up to $5,000.”

This year is the fifth anniversary for the program, so the company decided to do something a little different.

“For our fifth year, we decided to do five for five,” she said.

Two HVAC or educational trade schools will be chosen as winners in addition to the three students, and they can use the money they earn toward tools for the classroom or equipment for the students.