2018 Best Contractors to Work For: HVAC Company Takes Care of Internal Customers Before the External

From cleaning the bathrooms and sweeping warehouses to owning the company, John Barron has successfully traversed the HVACR landscape at Barron Heating & Air Conditioning in Ferndale, Washington. The company began with his father 46 years ago and now supports 143 employees, 81 of whom are service technicians and installers. Although a family business, John Barron acknowledges that everyone in the company is family, whether related by blood or not. Hard work, humility, and a commitment to both internal and external customers has earned Barron Heating & Air Conditioning The NEWS’ 2018 Best Contractor to Work For designation in the West region.

John Barron began working as a third-generation sheet metal worker for the company in 1979, when he graduated from high school. In the early ’80s, he entered an HVAC apprenticeship program and later became a journeyman mechanic. In 1991, he moved from installations to become vice president of sales. A mere seven years later, in 1998, he purchased the company and became the president and CEO of Barron Heating & Air.

“My father used to say, ‘A legacy is not who you are; a legacy is what and who you leave,’” said John Barron. “He would also tell me that whenever I meet a challenge, that I should stay positive. He explained that a positive mind is a creative mind, and when you get negative, it shuts down the creative energy and solutions.”

John Barron has some distinct and strong business philosophies that help him run his company in a manner that is experiencing success. One of those key truisms is that a business’ greatest asset is its people. With that in mind, the company operates on the basis of two customers: internal and external. 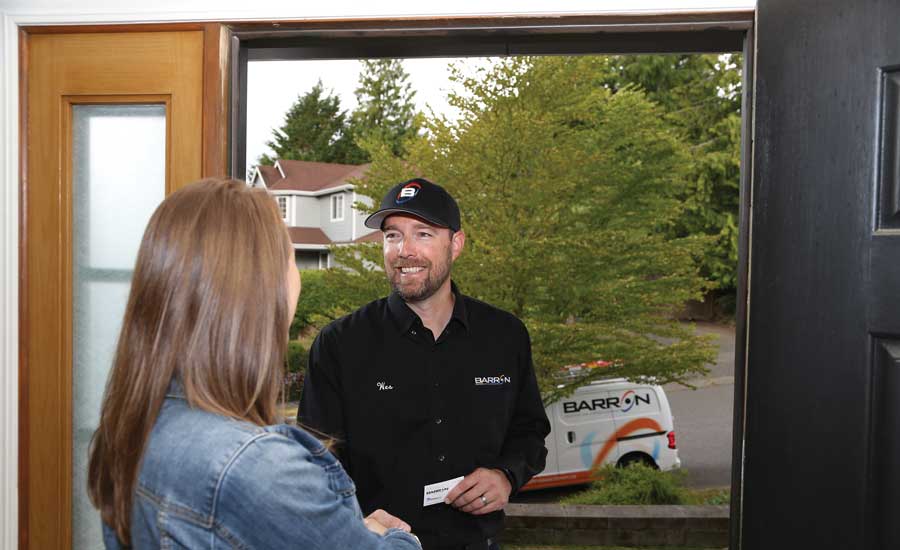 TWO CUSTOMERS: Barron’s Heating and Air Conditioning believes a business’ greatest asset is its people. With that in mind, the company operates on the basis of two customers: internal and external.

Developing a people culture isn’t an overnight endeavor, and hiring the right people is important, according to John Barron. With that in mind, he makes it a point to be involved in the hiring process of every person that takes a position with the company. Called a “meet and greet” — not an interview — John Barron takes time to get to know an applicant before an introductory period is offered. At any time during the introductory period, if the job is not fit for the employee or vice versa, the company reserves the right to release the person.

“Sometimes there is a position in the company or a different company or business that they are a better fit for; we direct them toward that,” he said. “If you have people on your team that are not a good fit, then I would make a correction. Even if you have to have less people but you have the right people, then things work really well.”

Another truism that John Barron focuses on as leader of the company is humility and service.

“If you combine your greatest asset and your greatest challenge together, you find humility,” he explained. “Humility is one of the most important things in business.”

He continued, saying that business is not about the money, but that money is what happens when contractors do the right thing and take care of their people.

“This company has always taken care of me very well, paid me well, and provided great benefits,” said Jim Slagle, 22-year technician at Barron Heating & Air Conditioning. “It has always had a great family atmosphere, and when you work with people that long, you consider them family.” 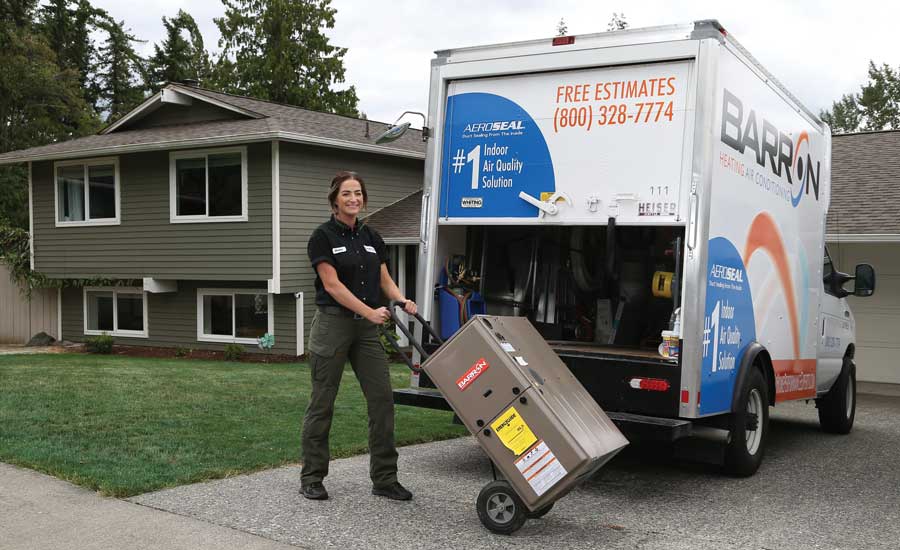 MENTORSHIP IS A MUST: Rookie technician Shelby Roberts found a fit at the company. With a desire to be a sponge for new information, she was impressed with the time taken to mentor and train her in the first three months at the company.

Slagle is a long-time internal customer who has tested the market and found that Barron Heating & Air Conditioning is the place for him. The finality of the decision came at the 10-year mark of his employment. Slagle had decided HVAC was where he wanted to stay but needed to be sure he wanted to spend his entire career at Barron.

“Within two days, I had 10 interviews, and no one could match what I found at this company,” he said.

After riding along with several other companies, rookie technician Shelby Roberts found a fit at Barron. With a desire to be a sponge for new information, Roberts was impressed with the time taken to mentor and train her in the first three months at the company.

“Just from those three months, I felt like I leveled up,” she said. “I made the right decision to be here, and I am growing as a technician. For anyone who wants to come and learn to be a successful technician, this is a great place to be.”

Changes and challenges have been plenty since John Barron took over the company, but one of the most difficult challenges has been pushing his company past the level of good. Barron Heating & Air Conditioning had hit its stride around 2012, and according to John Barron, he felt they had come to the pinnacle of the company’s customer experience and technical installations; they were a well-oiled machine. Then he learned about building science, and the game changed. 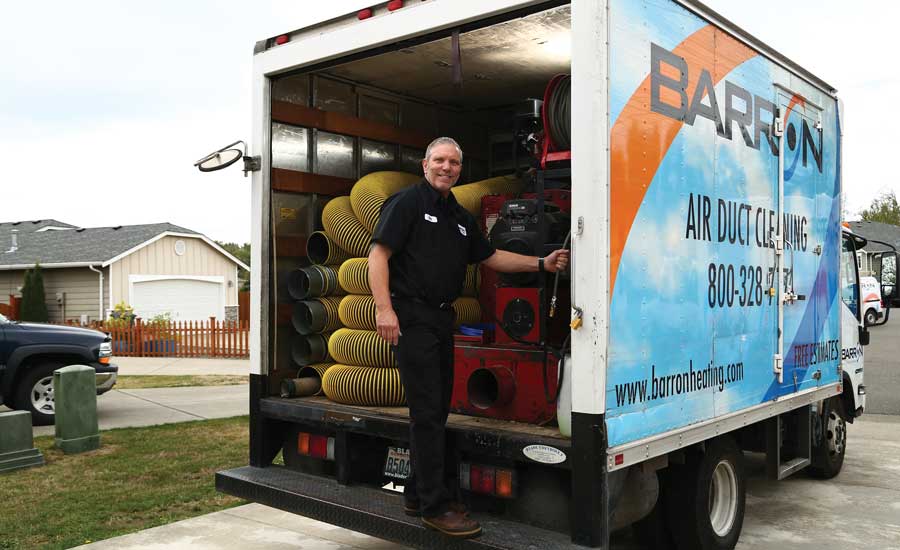 HEALTH AND COMFORT: Understanding that there was so much more to comfort, health, and energy through building science, the company began expanding its offerings and included weatherization, duct cleaning and sealing, etc.

“We started taking a look at homes and commercial buildings through the filter of comfort, health, and energy,” said John Barron. “Using science and testing diagnostic equipment, we make sure that our installations are enhanced experiences for our customers.”

Understanding that there was so much more to comfort, health, and energy through building science, the company began expanding its offerings and included weatherization, duct cleaning and sealing, etc. This year, it also added Barron Solar to the lineup of products and services being offered.

“We are very sophisticated in the way we approach heating, air, and ventilation,” said John Barron. “It’s not just about the box; it’s about the performance and functionality.” 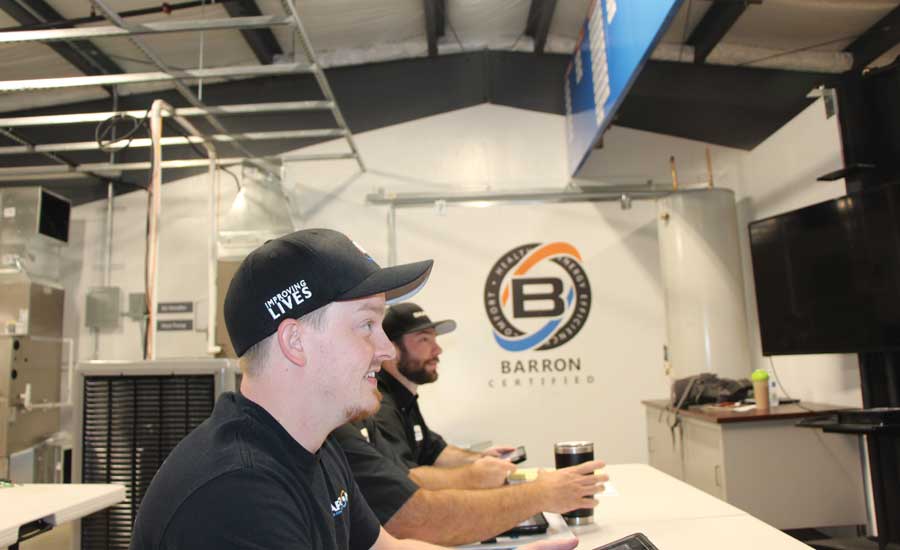 IN-HOUSE TRAINING: In the fall of 2018, the company introduced Barron Technician School as an on-the-job training program. It’s equipped with fully functioning service and installation labs, with classes taught by industry leaders.

In the fall of 2018, the company introduced Barron Technician School as an on-the-job training program. It’s equipped with fully functioning service and installation labs, with classes taught by industry leaders. Job candidates accepted by Barron Technician School receive classroom, lab, and on-the-job training without paying tuition. Additionally, employees may attend any outside relevant training, and the company will cover the costs. Barron is also offering paid apprenticeships, where candidates can receive their licensing and training while being paid livable wages. Once through the program, they are eligible for full-time employment and increased wages to match skill levels and to further their educations.

Mentoring is not only important to John Barron internally, but he is also happy to share with other contractors — especially those starting out — some advice that could lead to their success. He will often remind people not to reinvent the wheel when it comes to creating processes and organizing procedures and tasks. According to him, there are resources everywhere in this industry, from associations and leadership conferences to trade journals and mentors.

John Barron also suggests that contractors don’t try to implement absolutely every good idea they hear or find, especially not all at once. Doing one thing at a time until good at it and then adding another thing is a better way for contractors to find success, he said.

“The most important thing new contractor owners can do is to be uncompromising in the kinds of work they do and to their commitment in customer service,” said John Barron. “Make sure your customers are 100 percent satisfied. Make sure you go slow to go fast.”

Brad Barron is the fourth generation of family leadership at Barron Heating & Air. After graduating from the University of Washington and spending seven years as a licensed engineer, Brad Barron started as business development manager two year ago. In that position, he went through and worked with the different facets of the business, right down to making sheet metal fittings.  Six months ago, Brad Barron was promoted to director of operations. There, he supports service and leads an executive business team. The business teams at Barron Heating & Air Conditioning were designed so that the company is run as a flat organization. Instead of having a few select leaders in the company, the Barrons have empowered others to make in-the-moment decisions on behalf of the company. 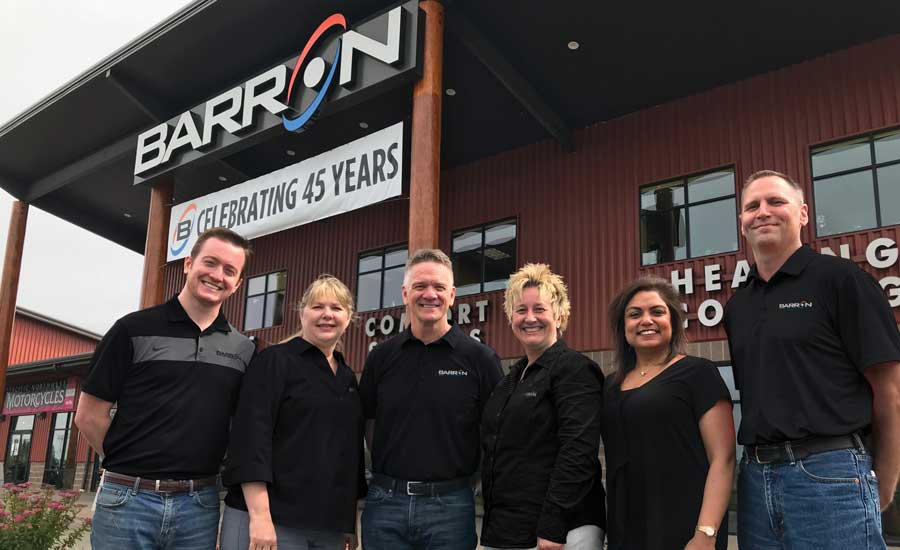 EXECUTIVE TEAM: Instead of having a few select leaders in the company, the Barrons have empowered others to make in-the-moment decisions on behalf of the company. Executive Support Team (left to right): Brad Barron, Linda Nordstrom, John Barron, Debbie Gwaltney, Raksha Rughani, and Patrick Harrington.

“It removes the bottleneck of decisions, which breeds poor customer experiences,” said Brad Barron. “We have a seven-person executive support team that are servant leaders to the 20-person leadership team. We really have a great voice of the company that spans the experience and generations.”

Other duties in his position include implementing departmental efficiencies and processes, spearheading recruitment, developing training programs, and overseeing marketing and current business, among other items.

Working side by side with his father, Brad Barron is happy to be participating in what he only got to watch for 30 years.

“John Barron wears two hats in my life: He’s my dad, and he’s my boss,” said Brad Barron. “He is a true servant leader — in our home, our business, and our church. Working with him, I get to see those qualities lived out. Simply put, he is the most passionate person I have ever met, and as a result of that, I have been inspired.” 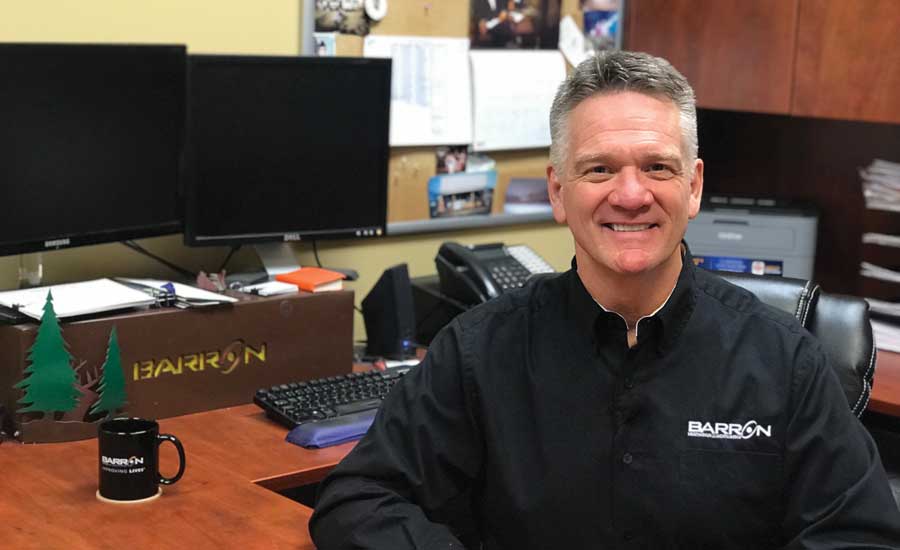 AVERAGE HOURS EMPLOYEES SPEND IN TRAINING: 60-plus hours per year

THE NEWS SELECTED THIS CONTRACTOR BECAUSE: Hard work, humility, and a commitment to both internal and external customers have earned Barron Heating & Air Conditioning The NEWS’ 2018 Best Contractor to Work For designation in the West region.