This website requires certain cookies to work and uses other cookies to help you have the best experience. By visiting this website, certain cookies have already been set, which you may delete and block. By closing this message or continuing to use our site, you agree to the use of cookies. Visit our updated privacy and cookie policy to learn more.
Home » 2018 Best Contractors to Work For: 128-Year-Old HVAC Contracting Company Continues the Family Legacy
HVAC Commercial Market

In 128 years and five generations, Canton, Massachusetts-based E.M. Duggan Inc. hasn’t lost its business principles or its family-friendly culture. The mechanical contracting company specializes in plumbing, HVAC, and fire protection and offers preconstruction, CAD, and prefabrication services to its clients in the commercial and industrial markets.

E.M. Duggan has been honored with numerous prestigious awards over the years.

Additionally, the company was inducted into the Mass Building Congress Hall of Fame in 2016.

Now it is adding one more to the impressive list, as The NEWS has named E.M Duggan 2018 Best Contractor to Work For in the East region.

Petroni and Monfredo represent the fourth and fifth generations within the family business, respectively.

Founded in Boston in 1891 by Edward M. Duggan, the company started out as a mom and pop shop. Once Edward Duggan passed away, the family decided to move the business to the suburbs of Canton, Massachusetts.

As the business grew, Edward Duggan II fostered a culture of high standards for both clients and employees. 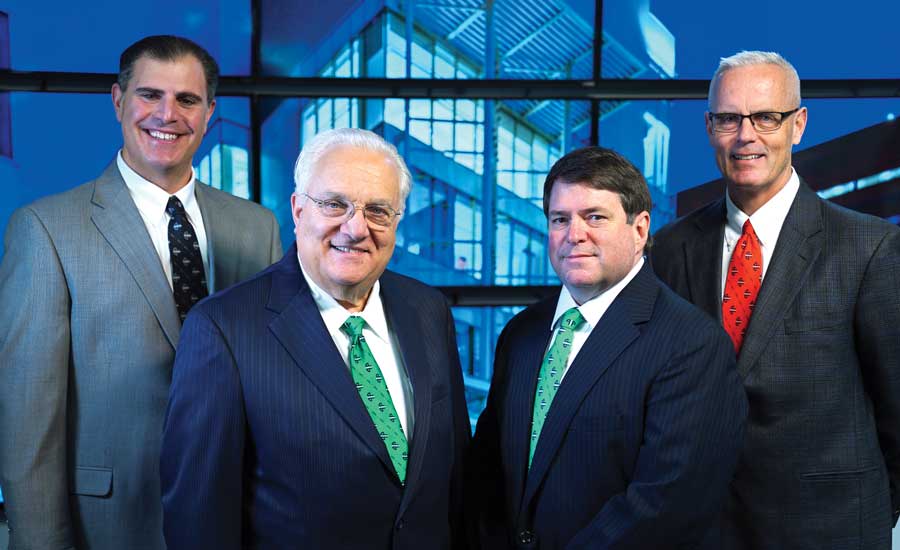 In 1967, E.M. Duggan was one of the first companies to add a prefabrication shop, a safe place for workers to assemble parts rather than being subjected to the outside elements as a high-rise is being built. The company now has two prefab shops spanning 100,000 square feet.

Petroni joined the company in 1979, after marrying into the Duggan family. Previously, Petroni had worked for Sheraton Hotels and an environmental research company on the financial side of things.

“I was asked to join the company as it was growing — they didn’t really have any financial people on-site, and we were just getting into computers, so it was the perfect time to have me join the firm,” Petroni said.

At that time, the company was run by Edward Duggan II (Petroni’s father-in-law) and his younger brother, Bill Duggan.

Petroni became president of E.M. Duggan in 2009. With the help of the management team, he took the company from $3 million in revenues to more than $140 million in 2014, all the while never forgetting about the employees and company legacy.

Additionally in 2009, Monfredo, who also happens to be Petroni’s son-in-law, joined the family business.

“About 10 years ago, my father-in-law recognized he needed and wanted a succession plan and called me to ask if I was interested,” Monfredo said. “I previously owned two companies in New York City. One was a general contracting company, and the other was a scenery company that built sets for commercials and music videos. Being in construction in New York, I was already involved in the industry, so it seemed like a good fit for me.”

“People ask us all the time how two Italian guys became owners of an Irish company,” Petroni added. “We keep the connection with the family. We honor the past, we honor the relationships we have with the Duggan family and all the things they did to build this company.”

In 2011 and 2013, E.M. Duggan purchased buildings on either side of its corporate/warehouse facility in Canton. Additionally in 2013, the company decided to reopen a location in Boston, which houses the Special Projects division and consists of roughly 12 employees.

There is no question that E.M. Duggan has left an indelible mark on the hundreds of high-rises, hotels, sporting arenas, and condos it has helped build and continues to maintain with its mechanical service department. The company earned $175 million in 2017 and finished 2018 with between $250 and $275 million in revenues.

E.M. Duggan promotes a family-friendly culture both within its walls and in the field.

“Everything we’ve achieved is all because of our people and the culture we have,” Monfredo said. “That’s the biggest reason why we’re successful.”

Generations of the same families continue to work at Duggan, noted Petroni. 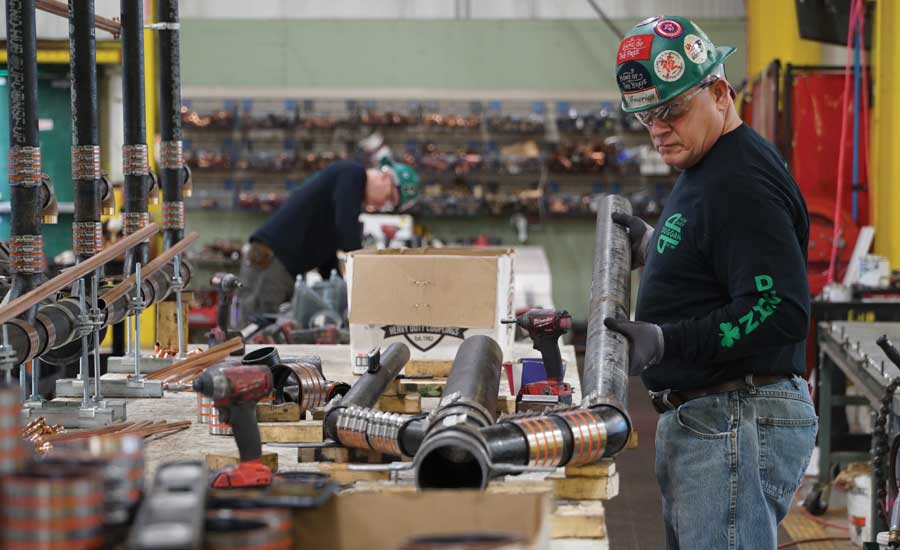 FAMILY BUSINESS: E.M. Duggan promotes a family-friendly culture both within its walls and in the field. Employees enjoy working for the company so much, they often refer friends and members of their own families.

“We have fathers, sons, cousins, and more,” he said. “Our employees bring in their family members because they truly enjoy working here. There’s a lot of loyalty that goes way beyond the immediate family. It’s a culture that has developed over a number of years, and we’ve kept it going. It seems to work.”

Rick Dorci, executive vice president and COO, agreed, calling the company a place where everybody looks out for each other.

“The best thing is all decisions are made locally,” Dorci said. “The leadership team can get together as a group, and there’s nothing we can’t solve in an expeditious fashion. Other major mechanical companies can’t make those decisions quickly.”

Kevin Walsh, executive vice president of plumbing, described the culture at Duggan as a team environment.

“So many different groups support and rely on each other, and everybody knows it,” he said. “All the groups have to work together in order for us to be successful. It’s not just one person or one group of people.”

Walsh joined Duggan in 2008, while Dorci joined in 2010, both coming from large corporate mechanical contracting firms.

“When the recession hit, it was pretty evident that the corporate environment was a difficult environment to work in,” Walsh said. “Working for a family business made a lot more sense. It was very attractive.”

E.M. Duggan does a good job of retaining employees.

“It’s because of the atmosphere we create,” Dorci said. “Jobs come and go, but people stay here for a long period of time and hopefully retire here. It’s important that our people feel very much at home here. That message has gotten out into our market, and we attract a lot of good people because of it.”

“Ownership has reached into its own pocket and kept people in jobs when maybe it wasn’t the most prudent decision,” he said. “It has certainly built unbelievable loyalty in the people we were able to retain.”

“The next generation of millennials and the generation after them, they want to work, they have no problem working, but they want to work at a company that appreciates the work they’re doing for them.”
— Len Monfredo owner and executive vice president of operations

E.M. Duggan offers a generous benefit package to its employees. The company pays 100 percent of its employees’ health care and offers dental and optical insurance, paid sick leave, paid vacation time, a 401(k) with a company match of the first 6 percent, life insurance, and short-term disability. In addition to the benefit package, the Duggan facilities in Canton offer a full gym and yoga room with 24/7 access to employees. The headquarters also features an upstairs gaming room featuring pool, air hockey, and foosball tables, along with a bar and kegerator for employees to enjoy after hours. Lastly, the facility also features a café that provides healthy meals from locally sourced organic foods. 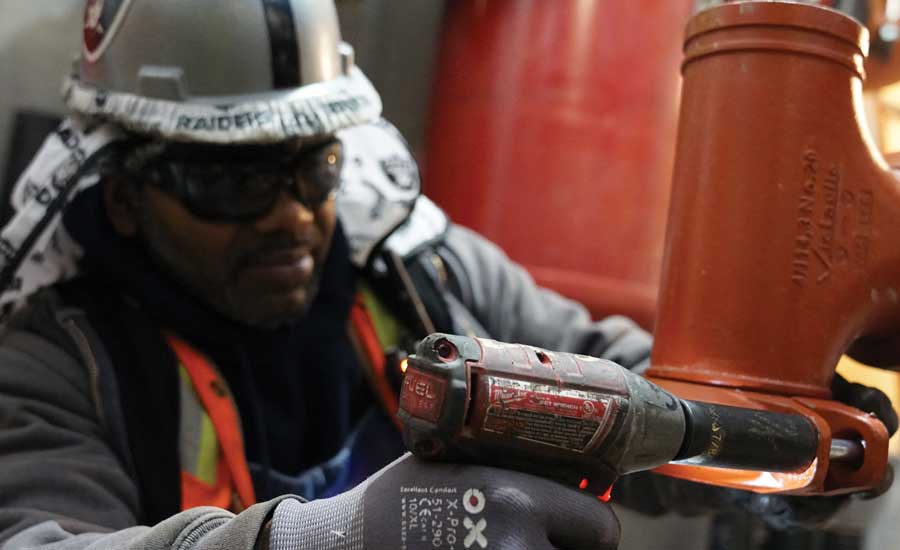 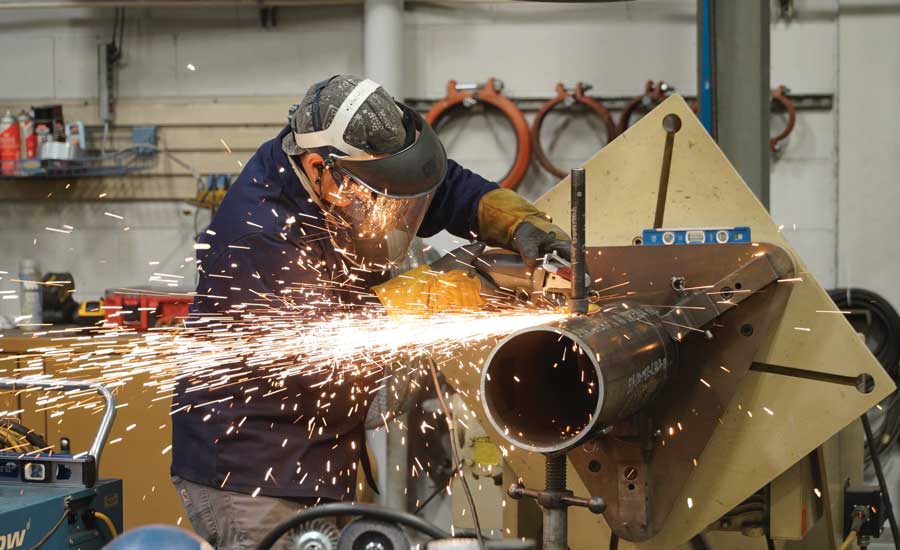 COMPANY PERKS: The Duggan facilities in Canton, Massachusetts, offer a full gym with a yoga room with 24/7 access to employees. There is also an upstairs gaming room featuring pool, air hockey, and foosball tables, along with a bar and kegerator for employees to enjoy after hours. Lastly, the facility also features a café that provides healthy meals from locally sourced organic foods.

“We like rewarding longevity,” Monfredo said. “The next generation of millennials and the generation after them, they want to work, they have no problem working, but they want to work at a company that appreciates the work they’re doing for them. Offering benefits like ours is kind of a given if you want to be successful in today’s workplace. If you want to retain new talent, you have to have these perks in order to keep your employees happy.”

The company also gives back to its employees in the form of discretionary bonuses.

“Every year, if the company is profitable and making money, our people will get a discretionary bonus — and a lot of times, it’s a very considerable bonus,” Monfredo said. “We have the philosophy that if we make money, everyone else is making money. It’s always been that way.”

PLANNING FOR THE FUTURE

Looking ahead, Petroni said he plans to continue on as he has been.

“We’ve been very successful,” he said. “Most of our business comes from repeat customers. We try to keep our customers happy. The economy keeps chugging along, and we’ll be just fine. We’re not looking to be the biggest or do the most volume. We’re interested in being profitable. So if that number grows and we’re still profitable, that’s great.” 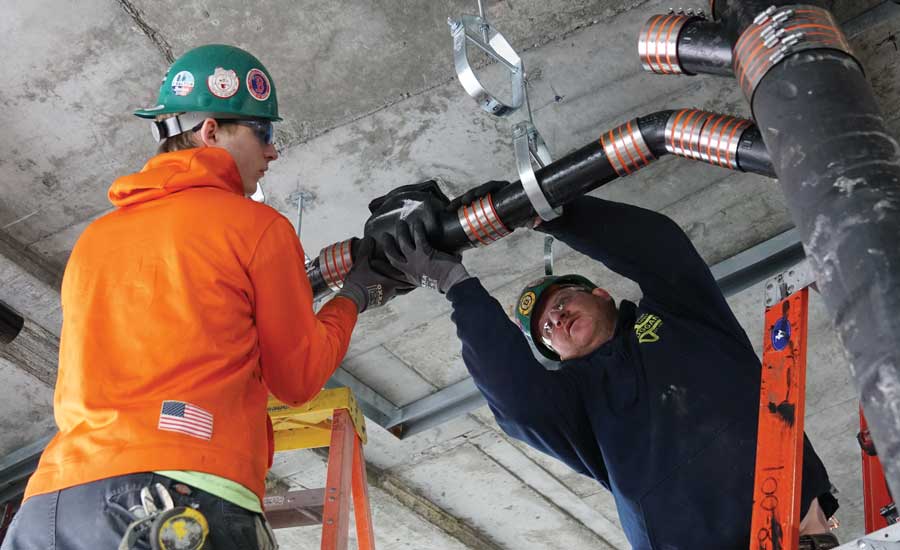 EFFICIENCY IN THE FIELD: E.M. Duggan employs an innovation and technology group that focuses on writing program software to improve some of the industry software that the company uses in order to do things faster, with more efficiency.

If a company is not moving or changing, it’s dying, Monfredo noted.

“We’re always trying to grow our service group — there will always be service work out there because all the building mechanical systems have to be maintained,” he said. “That group has grown exponentially over the past decade, and we only anticipate it growing more over the next decade. Construction is a very cyclical market. The market will go up and down, and we’ve been able to ride it out. And now, we’ll do it better because we have our special projects group and service group.”

Monfredo added that eventually, if things are working perfectly, the company may consider expanding into another state, but that is a long-term goal.

“It is something that would be done in an intelligent manner,” he said. “We wouldn’t just set up camp. We would purchase another company and turn the culture into something like ours.” 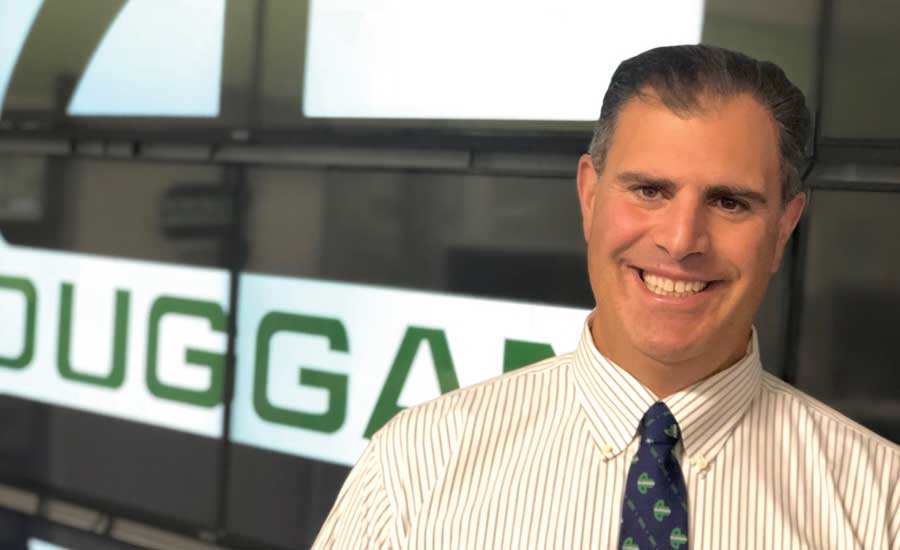 AVERAGE HOURS EMPLOYEES SPEND IN TRAINING: Over 40 hours per year

THE NEWS SELECTED THIS CONTRACTOR BECAUSE: It has a long history of maintaining a family-friendly atmosphere for employees. The company is committed to keeping its employees happy, healthy, and safe on the job. Nicole Krawcke is the business management editor for The News. Contact Nicole at 248-244-6475 or nicolekrawcke@achrnews.com.