HVACR Distributors Examine the Pros and Cons of Text Messaging

To Text or Not to Text? That Is the Question for HVACR Distributors

While communication has always been a cornerstone of HVACR distribution sales, the means in which these interpersonal transactions are transpiring is evolving exponentially.

And while emails, phone calls, and in-store visits aren’t going to sunset anytime soon, the next generation of HVACR distribution is widely embracing a new form of communication: texting.

Send Me a Text

Milwaukie, Oregon-based Mar-Hy Distributors has always encouraged customers to submit orders however they see fit. One year ago, about 80 percent of the company’s transactions occurred via email, and the remaining 20 percent were conducted over the phone or at the counter with a small handful still trickling in through fax.

Today, the company’s order mix is approximately 50 percent email and 40 percent text with the rest split between the counter and phone.

“Our customers have always preferred digital communications, and that continues to be true today,” said Eric Schmidt, counter sales, Mar-Hy, who, along with his twin brother, Matt Schmidt, is on tap to become the company’s third-generation owner. “Nowadays, people prefer to send text messages because even sending an email requires too much effort.”

Mar-Hy’s team of 20 employees first began experimenting with text messaging a year or so ago on their personal cell phones. What began as a way to field a few quick questions and orders snowballed into parts requests from unidentified numbers and typo-filled inquiries.

“We ran into a few initial challenges when it came to texting,” Schmidt said. “For example, if I received a message on my personal phone when I was out of the office, that didn’t do anyone any good. If I didn’t have my phone on me, it was dead, or I didn’t share the text with another team member, there was a chance the order may go unfulfilled. That customer may follow up by asking, ‘I sent my order to so and so, what’s going on?’ At the end of the day, that customer’s angry because we failed to meet his expectations, and we’re disappointed because we missed an opportunity to meet a customer’s HVAC needs. While this doesn’t happen often, we were really at a loss as to how we were going to effectively manage this new challenge.”

Bryan Boyd, vice president and general manager of AC Supply in Fort Worth, Texas, said his team began taking text orders a couple of years ago because that is simply where technology is headed. 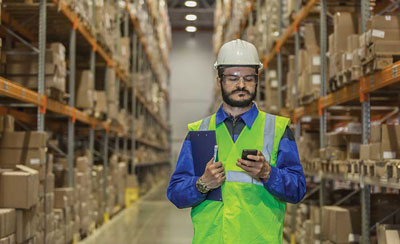 istance. If they want to utilize text messaging in a professional setting, then we’re going to allow them to do so.”

Today, AC Supply is processing questions and orders from approximately 40 contractors and averaging around 80 text conversations every week.

“Our customers use text to gather prices and will commonly send in pictures of units and serial numbers,” continued Boyd. “We sell LG duct-free equipment. As part our warranty process, contractors have to provide a copy of the model number and serial number so that we can process the correct equipment. Additionally, our contractors will write down their orders on scratch pads, take pictures, and send them in. We also get pictures of random parts with questions like, ‘Hey, do you have this?’ These pictures make it easier for us to identify the parts they’re looking for and go forward from there.”

As technology continues to evolve, Boyd believes it’s advantageous to be ahead of the curve.

“As distributors, we can’t always be beating each other up on price,” he said. “We have to find a different way to service contractors. I believe texting makes us easier to do business with than our competitors.”

Brandon Bateman, director of supply chain, Airefco Inc., said texting was the one communication channel Airefco had yet to fully vet — until now.

“Historically, we’ve not formally taken text orders, though there’s no doubt that it’s going on at the counters,” he said. “Our team recently met and discussed the value of texting. As far as communication goes, the convenience and speed of texting are unmatched. We felt the time had come for us to start pursuing a way to integrate texting into our branches.”

While texting may work for some distributors, it’s not a perfect fit for all.

Aaron Braun, IT and operations director for Portage, Indiana-based G.W. Berkheimer, said the company does receive a handful of text orders, but he believes HVACR’s intricacies make the industry a difficult fit for texting’s truncated demands.

“The HVAC industry is an extremely technical industry,” he said. “Many times, placing an order requires more interaction than texting allows. The ability to text orders may work best in businesses that have very basic, repeat-style orders.”

Like any form of communication, texting brings a considerable amount of baggage with it. From typos to the need for instant gratification to its simplistic approach, texting is chock full of challenges in the professional setting.

Regarding HVACR distribution’s use of texting, entrepreneurs Jack Carrere, McKay Johnson, and Mark Kanof believe they have solved a number of those challenges through their ProKeep platform, which is exclusively designed to provide “text messaging for distributors.”

ProKeep is a web-based solution that allows contractors to text photos, orders, questions, and inquiries directly to the counter using a branch’s existing landline number.

Once a message is received, an alert is deployed across any number of designated computers and is repeated until the message is claimed from the branch’s shared inbox. The counter sales representative who claims the message may reply with a custom or templated response, such as “OK,” “Got it,” etc. If a more complex response is needed, an individual can send screen grabs of technical documents, quotes, or PDF invoices, which serve as written receipts for the sender. Each distributor response includes the name of the responding counter sales representative, which retains the personal interaction between the contractor and distributor.

“Texting is something contractors are willing to do professionally because they’re already doing it in their personal lives,” said Carrere, co-founder of ProKeep. “Personal communication preferences have shifted to texting, and this is influencing our professional lives. Our research shows that 90 percent of contractors want to text their distributors, they just didn’t have a good way to do it, until now.” 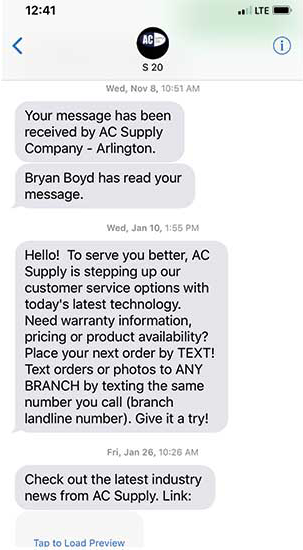 Carrere said the setup process is simple and requires no extra equipment or hardware.

“Contractors don’t need to download anything, as they’re simply sending text messages and pictures to the same branch number they already have programmed into their cellphones,” he said. “Distributors are only adding a web app. There is no specific software or hardware that needs to be installed or maintained. As long as distributors have access to the internet, the program will work for them.”

Many wholesale distributors are notoriously slow to embrace change and new technology, so adoption is the name of the game, Carrere said.

“We focused in on developing something that we feel will really advance the trade,” he said. “This model furthers the relationship between contractors and distributors, which is what separates us from Amazon and e-commerce. After just a couple of months, it’s not uncommon for distributors to see 15 percent of their orders via text.”

Since implementing ProKeep in November 2017, Mar-Hy’s Schmidt said the program has been an absolute game changer.

“When we took on text messaging, we asked, ‘Are customers really going to choose to text over call?’” Schmidt said. “So far, yes, that’s played out to be true. We didn’t realize we needed this until we had it. We’re fascinated by how quickly it took off.”

While typos do occur from time to time, Schmidt said contractors are more likely to make mistakes over the phone than through text.

“On the phone, guys get confused because they can’t identify exactly what they want, or perhaps our guys don’t understand exactly what the customer is asking for,” he said. “Now, instead of contractors driving in with parts only to hear me say, ‘No, we don’t have that, or it’s a factory order,’ they’re opting to text in photos, which has really simplified our ability to provide answers.”

Airefco Inc. formally added ProKeep in April and is now beta testing the product at its Tigard, Oregon, branch.

“ProKeep gives us and our contractors a formal solution to help streamline the texting process,” said Bateman. “This allows texts to be spread throughout the branch rather than landing on one person’s phone. When we were looking into adding this service, the primary question among our leadership team became, ‘Why wouldn’t we do this?’ While it gives us a competitive advantage today, we feel that communicating with customers via text will soon become a requirement.”

AC Supply implemented ProKeep last year and said the process was as simple as could be.

“I gave them the phone numbers we wanted to text to, which were each store’s main numbers, and the program was up and running in no time,” Boyd said. “ProKeep makes sense because customers do nothing differently other than send text messages.”

In addition to fielding outside inquiries, AC Supply uses ProKeep to communicate within its own branches as well.

“We may use it more internally than externally,” Boyd said. “Often times, our branch managers will send messages to the distribution center, and sales reps will use it to communicate with the branches. If they need a store to know something important, they send a text, because our sales guys prefer to text just like our customers do.”

Boyd said ProKeep has been an incredible upgrade for AC Supply.

“People tell us all the time that they love the service,” he said. “My sales team talks all the time about how much it helps them communicate with our stores as well as our customers. I believe texting will be a huge growth factor in the near future for HVACR distribution.”

Text messaging, or short message service (SMS), has revolutionized the way we communicate. And, this evolution has been a long time coming as, believe it or not, texting has been around for 25-plus years.
Today, SMS is the most widely used data application in the world, with 97 percent of Americans using it at least once a day. When we’re running late, need a simple yes or no answer, or simply want to quickly interact with friends and family, we often turn to text. As texting makes its way into professional settings, here are 10 statistics that demonstrate just how popular texting has become in modern society.