Every year for the last nine years, members of Heating, Air-conditioning & Refrigeration Distributors International (HARDI) have provided a voice for the industry in Washington, District of Columbia, through its Congressional Fly-in event.

During these visits, HARDI members marched through the halls of Congress, hawking their positions on several issues, including the repeal of the estate tax; preservation of the last-in, first-out (LIFO) accounting method; an extension of the federal geothermal tax credits; the institution of a nationwide online sales tax; full expensing of HVACR equipment; and more.

It appears as though HARDI’s strenuous lobbying efforts have paid off as many of the association’s key legislative issues are included in Congress’s recently passed Tax Cuts and Jobs Act.

The final bill, which was signed into law on Dec. 22, 2017, is expected to have a major impact on the HVACR landscape and numerous industry reps are eager to celebrate its passage and reap the benefits it will provide their businesses.

Repeal of the Estate Tax

The repeal of the estate tax was a principal concern of HARDI’s first Congressional Fly-in event in 2008 and has remained a top priority every year since.

Preliminary bills offered a phaseout and eventual repeal of the estate tax. The final bill does not include a full repeal of the tax, though it does double the exemption to $11 million for individuals and $22 million for couples.

Currently, the estate of a deceased individual is subject to a 40 percent federal tax when it exceeds $5.5 million for individuals or $11 million for couples. The fair value of all assets, including cash, stock, real estate, business interests, etc., is taken into account when calculating this fair value.

“Legislators don’t understand that our money doesn’t sit in our bank accounts, it sits in our warehouses and facilities,” said Jon Melchi, outgoing vice president, government and external affairs, HARDI. “Estate planning is hard enough without Uncle Sam butting in. This will immediately free up more working capital for businesses. Our members can now focus on growing through the generations rather than how they are going to come up with the money they owe the government.”

Karen Madonia, CFO, Illco Inc., Countryside, Illinois, has been a chief advocate for this cause for several years.

“It’s fundamentally wrong to place a tax on death,” said Madonia in a recent article published by the Chicago Sun Times. “If a person accumulates wealth through hard work, and if that person pays his or her fair share of taxes on income as it is earned, I do not understand how the government can justify taking a significant portion of what’s left simply because he or she opted to save and re-invest rather than consume.

“If something were to happen to my dad, and we were left with a large estate tax bill, we would have to sell parts of the company to pay that bill,” she continued. “That likely would mean shutting down branches, laying off workers, or liquidating inventory just to pay a tax incurred only because the owner died.”

The corporate tax rate will be significantly reduced through this plan.

The final bill enacts a 21 percent corporate tax, effective immediately. Additionally, the top individual tax rate is established at 37 percent, down from the 39.6 percent proposed in the House and 38.5 percent in the Senate.

The exemption for pass-through entities has also drawn some attention from industry representatives.

Under current law, profits from a small business “pass through” to the owner and are taxed at his or her individual rate, which, historically, has been as high as 39.6 percent. The new tax bill establishes a 20 percent pass-through rate.

“It’s unfortunate how quick Congress forgets that small businesses are truly the drivers of employment,” said Barton James, senior vice president for government relations, ACCA. “Anything they can do to help small business would have a huge ripple on our economy.”

“It doesn’t take a genius to figure out the U.S. corporate tax rate is significantly higher than other nations, which makes us less competitive globally,” Melchi said. “We’re less concerned with what the rates are on paper than what the effective rate is for our members. Historically, wholesalers and retailers have paid a higher effective tax rate than everyone else. We want it to be balanced out with a code and rates that are fair to those companies that operate primarily in the domestic space.”

The HVAC Expensing and Technology (HEAT) Act, HR 3515, which was initially introduced by Reps. Pat Tiberi, R-Ohio, and Ron Kind, D-Wis., and championed by HARDI, is included in the final bill.

The HEAT Act includes provisions that allow commercial building owners to expense qualified HVAC equipment. The bill would allow taxpayers to write off the cost of a qualified HVAC expense from capital accounts as a deduction for the taxable year in which the equipment was placed in service.

The new tax bill also allows full expensing of short-lived capital investments, such as machinery and equipment, for five years; increases the Section 179 small business expensing cap from $500,000 to $5 million with the phaseout beginning at $20 million; and maintains current depreciation schedules for real property.

“From the expansion of 179 expensing to the inclusion of the HEAT Act, there’s a lot to be excited about,” Melchi said. “Not only do businesses get to expense more of their capital improvements, but HVAC is now included in that. I consider that a victory for the HVACR industry.

“The HEAT Act will help contractors who are in the commercial space or are interested in getting in that space,” Melchi continued. “This will help them sell those products. If this plan does what Republicans say it will, which is put more money in the pocket of consumers and homeowners, that’s good for business.”

James said the inclusion of the HEAT Act and expansion of 179 are pretty darn exciting.

“Not only would this help commercial building owners, it would also benefit contractors, manufacturers, and distributors,” James said. “It would also encourage system replacements by incentivizing the replacement of aging equipment with new technologies, which would promote energy and cost savings regarding comfort-based expenditures.”

Melchi said HARDI has succeeded regarding LIFO because it is not repealed in either the House or Senate bills.

The tax bill, along with the House and Senate bills, will not allow the deduction of entertainment expenses, which is something HARDI members need to be aware of, Melchi said.

“Meals, yes; entertainment, no,” he said. “What we do is relationship based, so this is something that could impact how we conduct business going forward.”

While not involved in the tax debate, Melchi said HARDI is closely monitoring legislation regarding online sales tax avoidance.

“South Dakota’s legislature recently drafted a bill that addressed this matter,” Melchi said. “They knew it would be challenged by numerous online e-tailers and actually wrote it recognizing it would likely fail in the courts. They did that so that they could aggressively appeal that verdict to the U.S. Supreme Court. And, it worked, as it’s likely the court may take this up as soon as next summer.

“My fear on this is that we need Congress to act quickly if the courts rule,” Melchi continued. “If Congress does not rule quickly and set online sales tax parameters, we’ll have patchwork state legislation in California, Massachusetts, Ohio, etc. Nobody wants that, thus we’re in favor of the court moving forward with this case.”

James deemed the final tax reform bill a victory for the industry. “We applaud the House and Senate for standing up for the small businesses in America,” he said. “Victories like this wouldn’t be possible if ACCA and other associations, like HARDI, weren’t on Capitol Hill reminding Senators that small businesses are the true economic drivers of our country. We will continue our fight to ensure this improved small business rate makes it through the conference and onto the president’s desk in the final tax reform package.”

Melchi said he’s pleased the Trump administration was able to get this over the goal line.

“The president was elected just over a year ago, and a lot of things on his major agenda haven’t been touched,” he said. “I think Republicans knew they needed to produce something on taxes, or the folks who supported their campaigns in 2016 were going to be staying home come the mid-term election.” 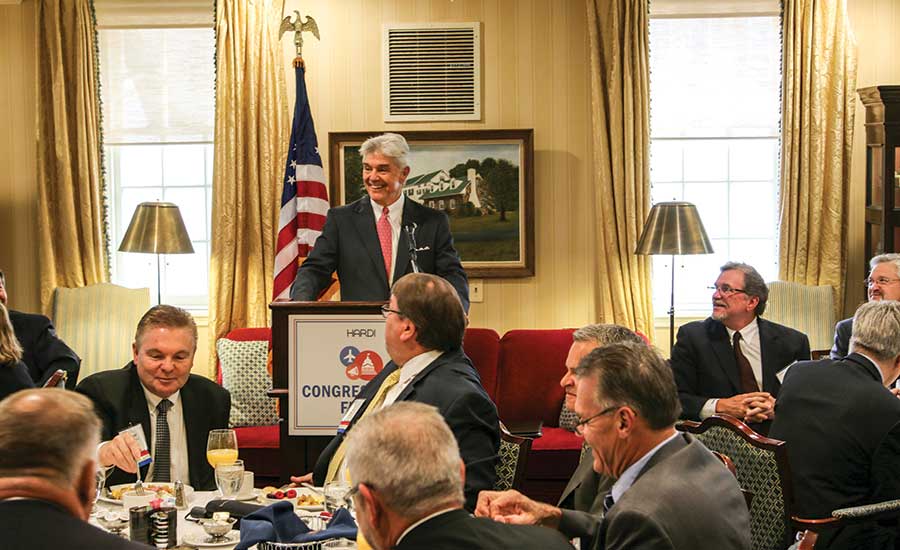 Heating, Air-conditioning & Refrigeration Distributors International’s (HARDI’s) 2018 Congressional Fly-in will occur May 22-23 at the Capital Hilton in Washington, District of Columbia.

The Fly-in serves as a way for HARDI members to directly connect with their constituents and their staffs on Capitol Hill.

Attendees spend an entire day strategizing a game plan that focuses on several key issues affecting their companies and the distribution sector. Attendees spend the subsequent day communicating these issues in the halls of Congress to their respective legislators.

“The Fly-in is incredibly important because the industry has some great stories to tell and it’s imperative that Congress hears them,” said Palmer Schoening, incoming vice president of government affairs, HARDI. “Congress is really getting to know who we are. In fact, we’re actually getting calls from Capitol Hill — they’re coming to us to ask us about individual energy policies.”

“Approach this visit the same way you would a meeting with a prospective client,” he said. “Introduce yourself, tell them what you do, and describe how you provide a service that no one else is capable of providing. After that, they’ll suddenly understand how important this industry is.”

Jon Melchi, outgoing vice president of government affairs, HARDI, said the process behind the Fly-in is simple yet effective.

“We schedule the meetings for you and brief you on the topics so that you’re well prepared on what you should be talking about,” he said. “I’ve done this a long time. Trust me, these legislators are much more scared of you than you are of them.”

For more information on the HARDI 2018 Congressional Fly-in, visit http://bit.ly/2018FLY-IN.