Where Does Refrigeration Figure into a Supermarket’s Plan?

For Some, Refrigeration Is Just Another Blip on the Map 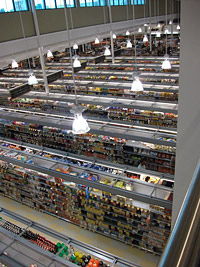 The photograph with this column was taken from the balcony of a supermarket in the Baltimore area during a tour of several stores at the Food Marketing Institute Energy and Store Development Conference. Notice the massive amount of floor space and products on display; then consider that the second floor, where the photo was taken from, also includes a large area of products typically found in a drug store, including the prescription counter.

What you don’t see in the picture is the refrigerated equipment except in the very lowest part of the photo. Nearly all that equipment is around the periphery of the store and most not within the camera angle.

So for refrigeration contractors and technicians who want the store decision makers to make decisions based less on “just keep it running at the lowest cost” and more on energy efficiency and durability, be aware that even multiple “lowest costs” storewide add up to a lot of costs for an entity with small profit margins.

Contractors should do everything they can to make sure refrigeration equipment is a bright blip on decision makers’ radar screens. But those radar screens can contain a lot of blips.