Do You Need a Blueprint for Recruiting Blue Chip Talent?

I live up in Michigan — Big Ten country. While I freely admit that the SEC has the most talented college football teams, the Michigan Wolverines had a decent run from 1985 to 2007. They had a winning record every year. Then the wheels came off with a new coach/coaches. The team was a cumulative 46-42 over the next seven years — barely a winning record.

In came former UofM player Jim Harbaugh, who had recent success in the NFL. When he arrived, there was not much talent in the locker room. He did not say that there was a lack of high school football talent in the state of Michigan — there is. He did not say that high school football coaches were in players’ ears recommending they go to different schools.

No, the football coach stepped up recruiting. He worked incredibly hard and had “out-of-the-box” thinking to bring talented players to Ann Arbor. The results have followed. In his fourth year, with his recruits up and down the roster, he has the Wolverines ranked fourth in the country with a berth in the playoffs a strong possibility. At least, he did at press time. But anything can happen in college football. 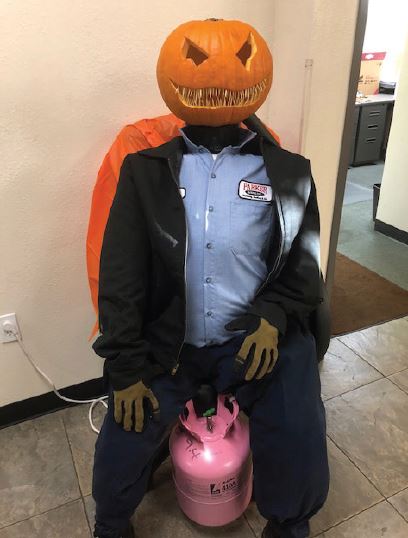 PUMPKIN SPICE IT UP: An industry-themed pumpkin carving contest was part of “Spirit” week at an Arizona HVAC contractor.

What does this have to do with HVAC you ask? Everything. HVAC contractors should be recruiting young talent with the energy and creativity of Harbaugh. As an industry veteran recently told me about workforce development, an industry problem does not need to be a local problem for a particular contractor. An HVAC contractor can only grow as fast as he can put people in the trucks.

Here are some ideas I have heard from contractors in regard to different ways to recruit young talent.

Perhaps you have your own ideas of how contractors should step up their recruitment game. If so, email them to me at kylegargaro@achrnews.com.