Refrigerant reclaimers have always played a pivotal role in the HVACR industry, ensuring that recovered refrigerant is certified to meet the AHRI 700 purity standard, so that it can be used again in existing (and new) equipment. Their role is gaining even more prominence as the EPA, under the AIM Act, is in the process of phasing down the production of HFCs. As supplies of virgin refrigerant dwindle, EPA is counting on the availability of reclaimed refrigerant to service existing equipment in future years.

However, the big problem is that the quantity of refrigerants being recovered is not sufficient to meet demand. In fact, since 2017, the overall reclamation rate of HFCs has increased only 6% (see Figure 1), and just 1.6% of the HFCs that were sold in 2020 were placed back on the market through reclamation (see Table 1).

Table 1: The total estimated reclaimed HFC refrigerants in MMTCO2e. (Courtesy of the EPA)

As an EPA spokesperson noted in a statement to The ACHR NEWS, “We would always be pleased to see increasing rates of reclamation. We expect that, similar to trends seen during the phaseout of ozone-depleting substances such as CFCs and HCFCs, rates in HFC reclamation will increase as the phasedown of HFCs continues and the supply of new HFCs gradually decreases.”

Reclaimers and much of the rest of the HVACR industry are also hoping to see an increase in the amount of HFCs being recovered and reclaimed. And soon. 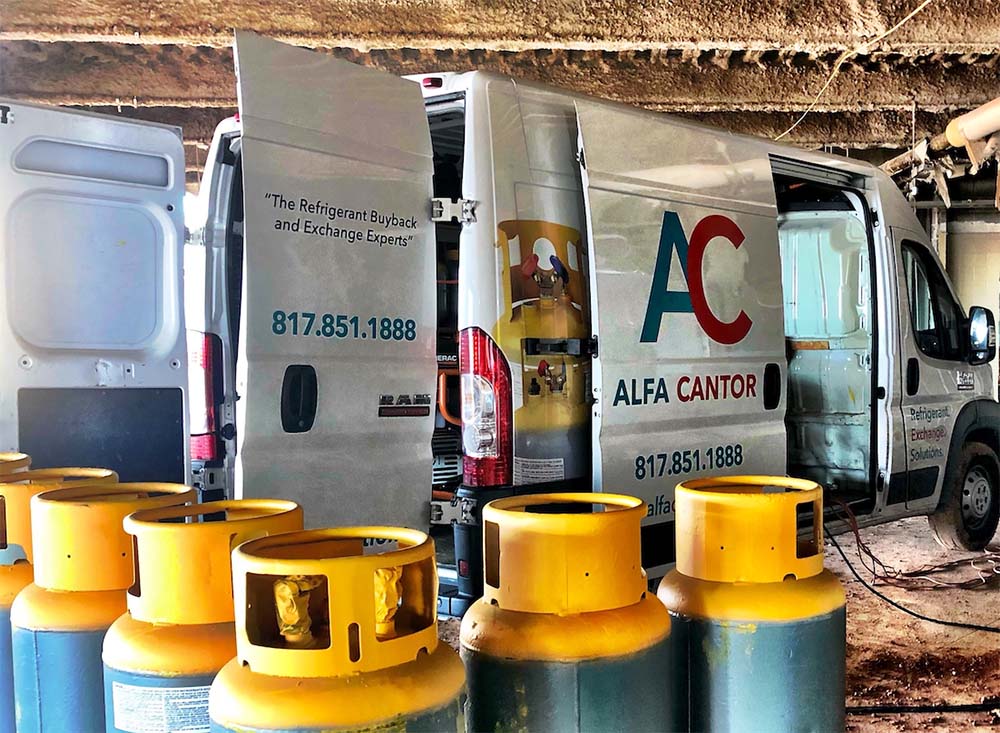 REFRIGERANT RECOVERY: The industry is counting on HVACR contractors to do their part in recovering refrigerants and turning them in to EPA-certified reclaimers. (Courtesy of Alfa Cantor)

“All refrigerants are in tight supply and we expect to see shortages once the 2024 reductions cut the supply further.”
– Carl Grolle
President, Golden Refrigerant

It is encouraging to see regulators recognize the role reclaimed refrigerants can play both in the aftermarket as well the initial install phase with OEM equipment, said Kate Houghton, vice president of sales and marketing at Hudson Technologies. However, EPA’s annual report that summarizes refrigerant reclamation trends continues to reflect a relatively low number of pounds of recovered HFCs when compared to the total number of virgin pounds sold annually, she said.

“If you isolate R-410A and compare it to the peak R-22 annual reclaim, we are only seeing roughly a quarter of the R-410A being reclaimed annually compared to that of R-22,” said Houghton. “Annual reclaim volumes for R-22 are starting to decline as well. Without growth in reclaim, however, both virgin and reclaimed refrigerants will be in short supply.”

Indeed, based on data released by EPA, it is apparent that the quantity of refrigerants being reclaimed has not increased over time as one would expect, said Maureen Beatty, executive vice president of National Refrigerants.

“As an industry, we are trying to understand the impediments, both real and perceived, to increasing the quantity of recovered refrigerants being sent to EPA-certified reclaimers,” she said. “It makes sense that the types of refrigerants being reclaimed are typically those most in demand. For example, there is more demand for reclaimed R-22 as opposed to reclaimed R-404A, since equipment owners are still transitioning out of R-22. This means that reclaimers may have recovered refrigerants, like R-404A, that have yet to be reclaimed and offered back into the market. But the demand for reclaimed HFCs, especially higher-GWP HFCs, will certainly increase as a result of the aggressive HFC phasedown.”

While the U.S. officially started its phasedown this year, cutting production of HFC refrigerants by 10%, a much steeper cut comes in 2024. That’s when virgin production must be reduced to 60% of the baseline established by the EPA, and it will likely be much more painful for the industry.

“The total amount of refrigerant supplied by the reclamation industry does not make up for the reductions in supply mandated by the AIM Act,” said Carl Grolle, president of Golden Refrigerant. “All refrigerants are in tight supply and we expect to see shortages once the 2024 reductions cut the supply further.”

If HVACR contractors do their part in responsibly recovering refrigerants and turning them in to EPA-certified reclaimers, there will likely not be a shortage, said Anthony Haines, CEO of Alfa Cantor.

“However, we suspect that some contractors are still taking shortcuts and venting units (cutting lines) and illegally reusing recovered refrigerants,” he said. “If this practice continues unabated, then we’ll have problems.”

As part of the AIM Act, EPA is tasked with establishing a program for maximizing the reclamation of HFC refrigerants, and many wonder what they intend to do. As Beatty noted, it is a question that the reclamation industry has been considering for some time. She stated that a comprehensive effort by a cross-section of industry is trying to identify the root cause(s) as to why more recovered refrigerant is not being returned to EPA-certified reclaimers.

“Once that happens, we will be able to better determine the appropriate measures to maximize reclamation,” she said. “There likely is not one cause, just as there likely won’t be just one solution. And I don’t think anyone really wants more regulations. But we need to address this issue as an industry so that we can work with EPA to maximize reclamation. The fact is that reclaimed refrigerants will be an integral part of ensuring a sufficient supply of refrigerants, especially higher-GWP refrigerants, as the HFC phasedown progresses.”

Houghton believes the EPA could do more to support the reclamation industry and to stimulate the increase in reclaimed refrigerants, especially since it was given the mandate to do so under the AIM Act. But to date, the EPA has not done so.

“We would like economic incentives for contractors and reclaimers who promote recovery and legal reuse and disincentives for those who do not follow the laws around the handling of refrigerants,” she said.

Grolle believes the EPA already missed a huge opportunity to support the reclamation industry by not directly providing allocations for reclamation activities. Because HFCs are primarily used in blends, having a sufficient allocation of virgin components is necessary for reclaimers to return the recovered refrigerant to a pure state, per AHRI Standard 700. Instead, reclaimers are being asked to grow their operations quickly and find ways to absorb the costs of collecting and handling mixed refrigerants, he said, which make up a growing portion of recovered refrigerants.

“To increase the amount of refrigerant being returned to reclaimers, the EPA will need to find a way to convince all HVAC technicians, as well as others, that the recovery of refrigerants is important and necessary for their operation. The burden of handling mixed refrigerants is also a deterrent to reclaimers from freely receiving or paying for all refrigerants turned in,” said Grolle. “They will also need to find a way to support the reclamation industry in a way that allows the reclaim companies to quickly scale up operations. We look forward to seeing what the EPA comes up with, but they missed a perfect opportunity to accomplish both goals by providing allocations directly for reclamation activities.”

Haines also does not believe that allocations were fairly distributed and he agrees that the quality of recovered refrigerant continues to decline, which requires additional processing and greater expense. To encourage more reclamation, he believes the EPA should be paying closer attention to the HVAC contractors who do not recover a proportionate amount of what they consume.

“This could be the single largest and easiest indicator (within reason) of which companies are violating the intention of the AIM Act,” said Haines. “Unfortunately, in today’s world, even though we are offering extremely high prices for buyback, the disregard continues. Penalties or other disincentives may be the only feasible way to gain attention to this critical issue.”