SAN FRANCISCO, Calif. – The North American Sustainable Refrigeration Council (NASRC) and Pacific Gas & Electric (PG&E) recently co-hosted an educational workshop to help the supermarket industry prepare for California’s new refrigerant regulations. California is one of a growing number of states that has committed to phasing down HFCs, setting goals to reduce state HFC emissions by 40 percent below 2013 levels by 2030.

In order to comply with these state regulations, the California Air Resources Board (CARB) has proposed a GWP limit of 150 for new stationary refrigeration systems containing more than 50 pounds of refrigerant, as well as a ban on sales of virgin refrigerants with a GWP above 1,500, starting on January 1, 2022. The short timeline to implement these changes in California will be tough to achieve. Speakers at the workshop addressed these challenges, focusing on the latest technology and financing solutions that can be utilized in making the transition to low-GWP refrigerants, such as CO2, hydrocarbons, and ammonia.

For California supermarkets and grocery stores, making the transition to low-GWP refrigerants in existing stores will likely be challenging because current refrigerants with a GWP of less than 150 are not drop-in replacements, which means entirely new — and expensive — refrigeration systems will be required. 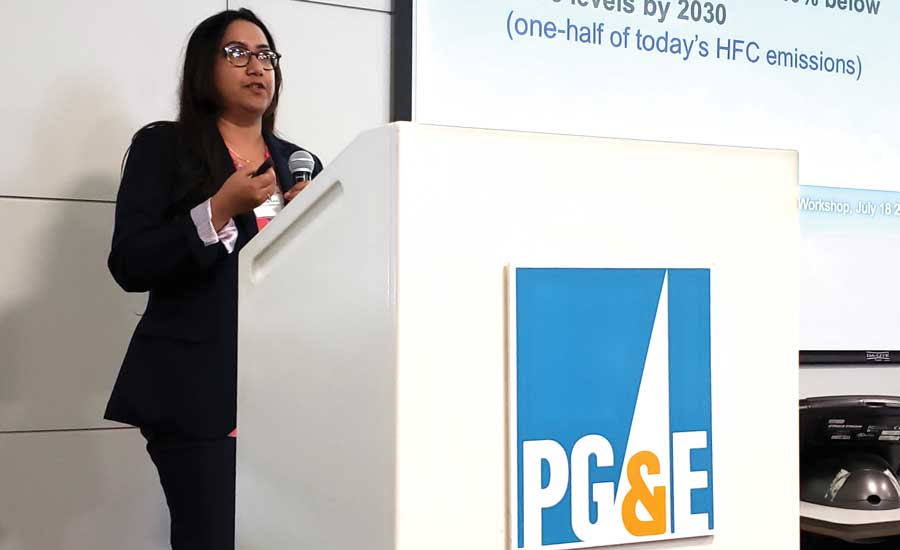 Richie Kaur, Ph.D., an air pollution specialist from CARB, addressed this obstacle at the workshop, noting that the challenges of retrofitting an existing store with a low-GWP refrigerant solution are very different than installing a system in a new store. That is why she invited audience members to share their retrofit experiences with CARB.

“How do we get to less than 150 GWP when replacing equipment in existing stores?” she asked. “We want to know more about feasibility and cost. And from a regulatory standpoint, help us define what it means to replace a system. When does a supermarket actually replace a system rather than repair small parts of it? And are microdistributed propane systems, for example, a feasible option for existing stores?”

That last question was answered by Nick Doherty, P.E., an associate from CTA Architects Engineers, Missoula, Montana, who provided an overview of the top three refrigeration systems that utilize refrigerants with less than 150 GWP. These include transcritical CO2 systems;

Starting with transcritical CO2, which has a GWP of 1, Doherty noted that these systems are currently used in supermarkets and convenience stores and are capable of handling various loads for low- and medium-temperature applications. 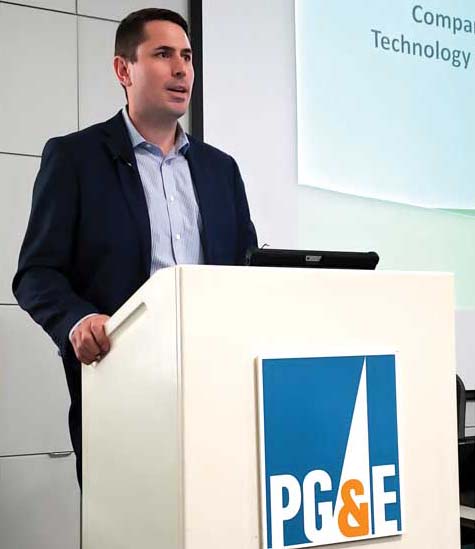 “Regarding installation, there is an overall reduction in the size of pipe required, due to the density of CO2,” he said. “Due to the higher operating pressures, the piping and fittings will differ from what is commonly used in standard refrigeration systems. We have designed systems with stainless steel or copper iron-type piping capable of meeting the system pressure requirements. Standard copper piping can be used in some of the system piping, as long as you’re meeting the pressure release.”

Transcritical CO2 systems operate at pressures several times greater than that of common refrigerants, so when the outdoor temperature rises above the critical temperature, it is no longer possible for the refrigerant to condense back to liquid in the condenser, as found with today’s common refrigerant systems, said Doherty. The discharge gas can only be cooled with the use of a gas cooler, and it takes the addition of a high-pressure expansion valve, along with various other components, to bring the CO2 back to a liquid state.

“I mention this because when the system is operating in transcritical mode, the efficiencies are lost in comparison to when the system is operating in subcritical mode, meaning the outdoor temperature is below the critical temperature and the refrigerant can condense in the gas cooler,” said Doherty. “There is a tremendous amount of focus on how to overcome the efficiency losses in warmer climates.”

Another concern is the availability of properly rated components and the proper grade of CO2 for transcritical systems, which is why some store owners keep a full reserve of the refrigerant on-site, said Doherty. However, this can impact the building, particularly if the store was not designed to handle the weight of the extra refrigerant. In some cases, he said it may be necessary to add structural support to the machinery room in order to accommodate the additional weight of CO2 cylinders.

As for cost, Doherty said in a comparison of similar stores with CO2 systems, the overall cost of the equipment was 20 to 45 percent greater than what would be estimated for an R-448A system.

As far as operating pressures on the ammonia side, Doherty said that they’re similar to refrigerant currently used in refrigeration systems. Due to the nature of ammonia, the piping must be carbon steel, stainless steel, or aluminum. Copper is not permitted for use with ammonia, which reacts unfavorably with that material.

Safety is also a big concern with ammonia systems, as ammonia has a higher toxicity level than traditional refrigerants. For that reason, the ammonia side of the system must be located outdoors or in a structure separate from the building, while the CO2 system can be located inside or outside the building. Doherty said that a typical configuration places the ammonia outdoor units on a rooftop with the CO2 systems inside the building in a centralized compressor room.

“Today, cascade systems are being applied in medium-format stores and larger supermarkets, with the potential for systems to meet the needs of smaller footprint stores in the future,” he said. “The challenge is not with CO2; it’s finding manufacturers that are making the ammonia side small enough and at a price that is affordable. In a comparison of similar stores with cascade systems, the cost was 25 to 80 percent higher than what would be estimated for the racks using R-448A baseline system.”

Microdistributed units use propane (R-290), which has a GWP of 3, and are a modular system where each fixture is outfitted with a self-contained, hermetically sealed propane refrigeration unit. These systems require a water loop ranging from 50° to 115°F for operation, said Doherty.

“The temperature of the water loop will play a role in the overall efficiency of the systems,” he said. “In order to meet the lower temperature requirements, you will need to use either a geothermal heat pump or chiller. The higher end temperature ranges can be met with the use of a fluid cooler or a dry fluid cooler.”

These units are currently restricted to a charge limit size of 150 grams, although that may be increasing in the future. They are often used in convenience stores, drug stores, small format stores, and supermarkets.

“I see a lot of these systems used in small format stores, where a building may already have a chilled water system,” said Doherty. “You could add them to an existing refrigeration system, if you can make a chilled water loop off of the refrigeration circuits. They’re very flexible if you want to reformat a store and move the cases. You can expand the system with natural refrigerant and still continue using the existing refrigeration system, which reduces the overall charge of the higher GWP refrigerant.”

SHOW ME THE MONEY

Investing in these new refrigeration systems will be costly, which is why the workshop offered several potential solutions to help overcome those obstacles. At the state level, California recently allocated $1 million to its low-GWP incentive program, which is intended to promote adoption of new low-GWP refrigerant technologies throughout the state. 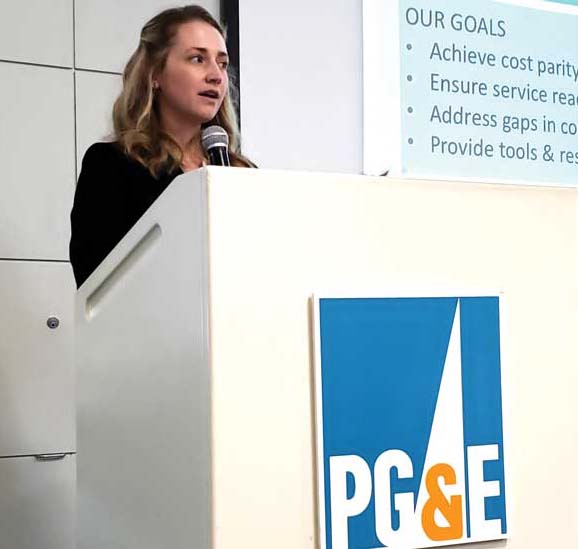 FINANCIAL SOLUTIONS: According to Danielle Wright, executive director of NASRC, combining a number of financial mechanisms may be the solution that allows supermarkets to adopt natural refrigerant systems.

An interesting concept discussed by Saskia Feast from Natural Capital Partners, New York, New York, involved leveraging carbon offset credits for greenhouse gas emissions reductions from natural refrigerant projects. In this scenario, the carbon offset credits would be purchased from a supermarket, reducing the upfront cost of a natural refrigerant project. The NASRC and Natural Capital Partners are partnering to pilot this carbon financing model with the hopes of scaling into a larger program. This funding source could then be coupled with state or utility incentives to make a low-GWP refrigerant project financially feasible.