Under the federal American Innovation in Manufacturing (AIM) Act, the Environmental Protection Agency (EPA) has been given the authority to phase down the consumption and production of high-GWP HFC refrigerants such as R-410A and R-404A in the U.S. The final details of the phasedown should be known by October, including the program that EPA must establish under the AIM Act that will maximize the reclamation of HFCs and increase opportunities for reclaiming HFC refrigerants.

This is an important piece of the HFC phasedown, as reclaimed refrigerant will be needed to service existing equipment in future years as production of virgin refrigerant begins to wind down. While refrigerant reclaimers are ready to meet this challenge, they are concerned about how EPA will allocate virgin HFC components, which are needed to return blended refrigerants back to the correct proportions required by the purity standard, AHRI 700.

In administering the HFC phasedown, EPA will create an allocation program, which will define the methodology used to distribute allowances as well as determine the entities that will receive allowances. Essentially, companies or organizations will receive a set quota or allocation of refrigerant they can produce or import; then that allocation will be phased down over time.

This allocation process is a concern for most refrigerant reclaimers, including Carl Grolle, who is president of Golden Refrigerant. That’s because HFCs are primarily used in blends, so having a sufficient allocation of virgin components will be crucial in order for reclaimers to balance the off-specification blends they collect.

“This is a significant difference from the CFC and HCFC phaseouts, as much of the earlier refrigerant categories had large quantities of single component refrigerants,” he said. “If reclaimers have to separate off-spec refrigerants to bring them back to the proper composition, the overall amount of refrigerant the reclaimers can return to the market will plummet. Also, without the economic power of known allocations, reclaimers would not be in position to qualify for loans needed to upgrade their equipment for the additional challenges presented by the HFCs and HFOs.”

“Without guaranteed access to virgin HFC components, the amount of HFCs reclaimed annually will not grow as called for under the AIM Act, and our industry will face significant economic harm,” he said. “If the EPA wisely and preferentially allocates HFC refrigerants to the reclaim industry, that will ensure the longevity and health of our industry.”

And there is definitely some optimism about the future. Without knowing all the demand needs of users, the reclamation market has the capacity to grow HFC reclamation and should meet anticipated demand levels, said Kate Houghton vice president of sales and marketing for Hudson Technologies.

“Putting the current HFC reclamation levels into perspective, when compared to the mature R-22 reclamation market, we should see more than four times the growth in HFC reclamation quantities and are expecting even greater growth as the EPA is mandated to help grow the reclamation market,” she said. “If this growth is achieved, and we believe it will be, then reclaimed refrigerants will be well positioned to meet market demand.”

“The problem going forward is that much of the received refrigerant will be unprofitable to collect, so as prices to turn in refrigerant rise, we expect more refrigerant to disappear from the market.
— Carl Grolle
President Golden Refrigerant

As for supplies of R-22, demand for the refrigerant continues to be strong, and while both reclaim and virgin are currently available, virgin stocks are continuing to shrink. In addition, most reclaimers are concerned over the proper recovery and reclamation of R-22, which are vital for the long-term servicing needs of the installed base.

While it is unknown how long virgin stocks of R-22 will be available, the majority of reclaimers and manufacturers have availability, said Hundley. He added that while the price of reclaimed refrigerants increased in the first part of 2021, that seems to be moderating. But there is no question that the pandemic affected business last year, and there is concern about not only the reduction in recovered refrigerant but also the quality of the materials being recovered.

“Business was off by 20% to 40%, due to all the COVID-19 ramifications of people working from home, businesses being shuttered, and reduced throughputs,” he said. “We are expecting 2021 to be better and come closer to 2019 in performance. But technicians are still not recovering properly, and the mixing of refrigerants is increasing. We are destroying between 2% and 5% of throughput.” 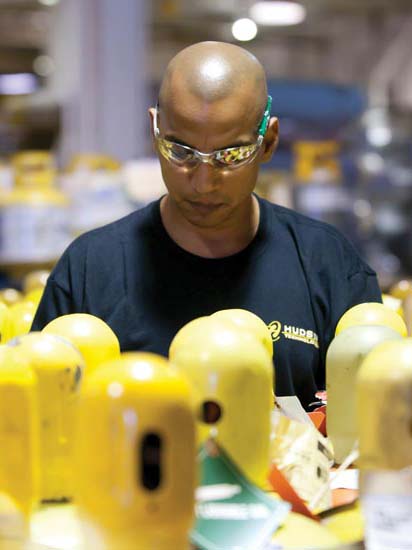 NO GROWTH: R-22 is still the dominant refrigerant reclaimed in the U.S., but its reclamation has not grown, which is likely due to either illegal reuse or venting. (Courtesy of Hudson Technologies)

Hudson Technologies is also seeing a large percentage of recovered HFCs that are either mixed or out of balance when compared to the AHRI purity standard. However, a bigger problem is that reclamation of R-22 has not grown, said Houghton, which is most likely due to either illegal reuse or venting.

“Without enforcement, we expect the trend to continue, though we remain hopeful that continued education and emphasis on reclamation will lead to growth,” she said. “R-22 is still the dominant refrigerant reclaimed in the U.S., but for there to be growth in reclamation, there needs to be a combination of enforcement and education, in addition to the economic incentives that reclaimers already offer to improve recovery rates.”

Grolle added that the EPA could make structural changes to the regulations so that reclaimers could profitably handle all returned refrigerants, including mixtures. He believes these changes could be made without adding costs, which would lower the cost of turning in refrigerant while encouraging more recovery in the field. But so far, his pleas to EPA and industry trade groups have fallen on deaf ears, as HFC rulemaking is currently dominating the conversation.

“The significantly more difficult mixes that will result from multiple blends and flammable components could possibly topple the reclamation industry,” he said. “EPA has not recognized this issue, and it could derail all of the intended positive impacts of the HFC phasedown. The problem going forward is that much of the received refrigerant will be unprofitable to collect, so as prices to turn in refrigerant rise, we expect more refrigerant to disappear from the market.”

Grolle estimates that one-third of all the refrigerant his company receives is cross-mixed. While some of that can be separated and returned to market through the process of fractional distillation, environmental concerns are making it difficult to destroy the rest. 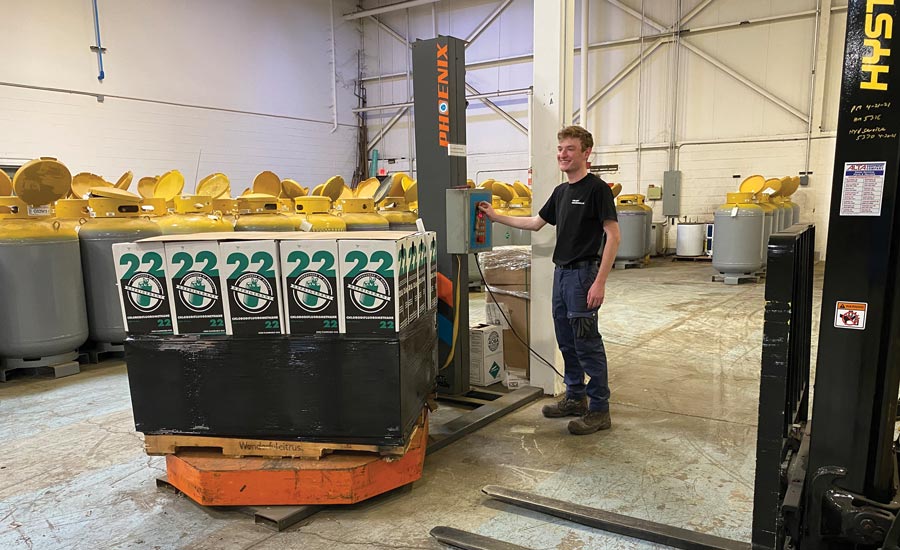 HIGHER PRICES: R-22 prices have been rising, making it profitable for reclaimers to separate mixed refrigerants and return much of it to market. (Courtesy of Golden Refrigerant)

“California’s carbon offset program has made incineration prices unworkable, so most reclaimers are storing their mixed refrigerant, waiting for a better solution,” he said. “Mixed refrigerants definitely add costs, but the rising price of R-22 allows us to separate and return a lot of it to market. I believe that R-22 will continue to support the reclamation industry during the next couple of years. But the total amount of refrigerant turned into reclaimers is a fraction of what should be available.”

Refrigerant reclaimers are also keeping an eye on the future, as the HFC phasedown will herald a new era of low-GWP refrigerants that are mildly flammable (A2L). There are definitely safety concerns with A2L refrigerants, said Grolle, and he noted that they are waiting for safety guidance and building code changes that would allow reclaimers to work with these refrigerants like everyone else. As for the recovery process and reclamation processes for A2L refrigerants, they are pretty much the same as those for nonflammable refrigerants, other than equipment modifications for safety reasons, he said.

Alfa Cantor is not currently accepting the majority of A2L refrigerants, as Hundley noted that the flammability issue remains a concern in any operation where there is heat, pressure, and a potential for an ignition source.

Flammable and mildly flammable refrigerants require additional safety measures for all participants in the supply chain, including manufacturers, wholesalers, contractors, reclaimers, and storage facilities, said  Houghton. That is why more education and training are needed to ensure that the refrigerant industry is operating safely and understands all of the implications of handling and using A2L refrigerants.

That said, Houghton is looking forward to the future. “We are excited about the growth opportunities for reclamation as well as the significant environmental benefit of the use of reclaim over virgin refrigerants. Reclaimed refrigerant continues the conversation about sustainability and can directly support customers’ sustainability goals.”

In 2020, 40% of the refrigerants coming in to reclaimers were mixed, making much of it economically unviable to separate. This, added to all the new blended refrigerants that consist of two to three components being offered, will likely make the problem worse.

To address this issue, Midwest Refrigerants LLC has come up with a patented, Montreal Protocol-approved technology, which takes all unwanted, end-of-life CFCs, HCFCs, HFCs, and HFOs that have to be incinerated and, instead, chemically converts them back into the source chemicals: high-purity anhydrous hydrogen fluoride, anhydrous hydrogen chloride, and carbon monoxide that all can be used for new commercial purposes.

“It is the only Montreal Protocol-approved technology for conversion/transformation that creates value from refrigerant gas waste and one of the very few approved technologies accepted for R-23 elimination,” said Lew Steinberg, president of Midwest Refrigerants LLC-USA. “Midwest is taking the destruction expense and turning it into a profit center. We consider this technology to be the future of reclamation.”

The recent passage by Congress of the AIM Act includes references to the technology offered by Midwest Refrigerants, and the company can convert an extensive number of refrigerants. According to Steinberg, additional research and development has shown that his company’s technology can also be used to convert so-called “forever chemicals,” such as per- and polyfluoroalkyl substances (PFAS) and other halide (e.g., fluorine, chlorine, bromine, iodine) wastes such as persistent organic pollutants (POPs).

The technology will be available for commercial use in 2022.