The HVACR industry is transitioning away from high-GWP, nonflammable (A1) refrigerants, such as R-404A and R-410A, to low-GWP alternatives, such as CO2, R-290, and lower flammability (A2L) refrigerants. The first two are already available in the commercial refrigeration market, with A2Ls poised for introduction in the near future.

The air conditioning market is already in the process of making the transition to A2Ls, but the commercial refrigeration market is a little behind. That delay is due to several factors that involve the Environmental Protection Agency (EPA), codes and standards, and technical issues surrounding A2L refrigerants. This all takes time, which is why it may still be a little while before low- and medium-temperature A2L equipment becomes widely available.

As noted above, the air conditioning market is well on its way to transitioning to A2L refrigerants. That’s because EPA’s Significant New Alternatives Policy (SNAP) program has already approved several A2L refrigerants for comfort cooling, including R-454B and R-32; applicable safety standards from ASHRAE (Standard 15) and UL (60335-2-40) have been updated; and states are in the process of revising their building codes to allow their use.

On the commercial refrigeration side, the industry is still waiting on some of these steps, but the crucial first step of updating the safety standards to allow the use of A2L refrigerants is finished.

“The product safety standard, UL 60335-2-89, and the application safety standard, ASHRAE 15 2019 Addendum l, have both been published, establishing the charge limits and mitigations needed to use A2Ls,” said Jennifer Butsch, director of regulatory affairs at Emerson. “Over the next few years, we expect the necessary regulatory and code updates to follow suit, which includes EPA SNAP approval of A2Ls in multiple end uses; model code updates in the upcoming code revision cycle; and state and local building code updates.”

The bottom line is that in addition to complying with UL 60335-2-89, A2Ls must be listed for use in specific equipment classes by the EPA’s SNAP program and building codes updated to allow their use in commercial refrigeration equipment, said Christopher Gangemi, segment marketing manager of refrigeration at Danfoss.

“Without these three things being done, the HFO A2L refrigerant cannot be legally used in commercial refrigeration equipment,” he said. “In some states such as Texas and Washington, laws are being written that a building code may not prohibit the use of substitute refrigerants authorized by the EPA. In other words, even if the building codes are not updated in those states, the refrigerant can be used if it is SNAP-approved for use in that specific equipment type.”

The biggest challenge we have is getting material, because the chemical companies are just now coming online with the A2Ls.
Robert DelVentura
Director of research and development
Heatcraft Refrigeration Products

While waiting on the regulatory process, equipment manufacturers have been busy evaluating the large number of A2L refrigerants that have been introduced. This requires a tremendous amount of due diligence, because A2L refrigerants require extensive testing to ensure safety and performance, said Robert DelVentura, director of research and development at Heatcraft Refrigeration Products. Heatcraft has evaluated many different A2Ls, but the company is primarily testing R-455A, R-454C, and R-454A in its commercial refrigeration equipment — when it can obtain the refrigerant and the components.

“The biggest challenge we have is getting material because the chemical companies are just now coming online with the A2Ls” he said. “Another challenge is finding the components. With the UL standard (60335-2-89), there are different mitigation levels, so we have to identify the right components and sensors to use, and we're trying to work through all those pieces. We're actively testing the refrigerants in our lineup, so we're getting more and more experience with them, especially with the glide. R-455A, example, has a really large 22°F glide, so that’s all part of our testing.”

Emerson is also in the process of approving R-455A, R-454C, and R-454A as alternatives to R-404A for its Copeland brand (see Table 1), and glide is one of the many considerations that must be taken into account, said Joe Summers, senior product manager of scrolls and drives at Emerson. In a recent webinar, he noted that there are tradeoffs involved with any of the A2L refrigerants. 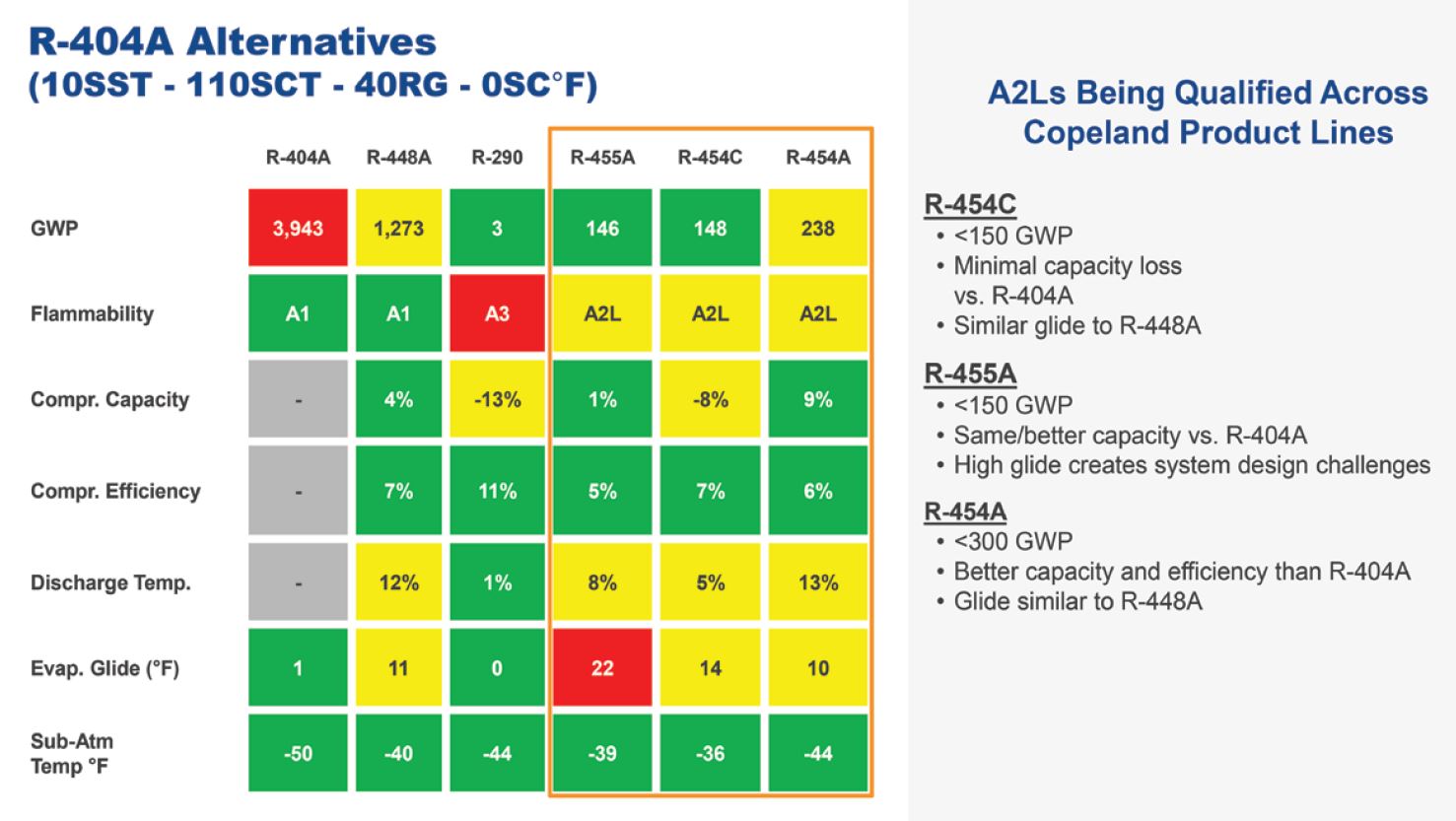 “With R-454C, for example, you're going to lose about 8% compressor capacity, but its glide is going to be right around the same level as R-448A. It's the closest to a drop-in and would require the least amount of engineering redesign. Although you are going to have to upsize the compressor by 8% in order to make up that capacity gap,” he said. “R-455A has just about the same capacity as R-404A, but the downside is the level of glide, which is about 22°F. It’s going to require more redesign work in order to use that refrigerant. But to the positive, you will not get that loss of capacity that you'll get with R-454C.”

With GWPs of less than 150, R-454C and R-455A will meet California’s limits for new refrigeration equipment, as well as some of the petitions that EPA is considering. Should EPA allow a higher GWP of 300 for systems containing less than 200 lbs., then R-454A may be a good choice for certain refrigeration systems.

“With R-454A, you're actually going to get an increase in compressor capacity, the compressor efficiency is going to go up, and your glide is actually a little bit less than it would be with R-448A,” said Summers. “In those remote applications where 300 GWP may be allowed, R-454A becomes a really attractive solution from a total cost of ownership perspective.”

In addition to refrigerant glide, high discharge temperatures can be a challenge with A2L refrigerants, said Gangemi.

“For high discharge temperatures, injection into the scroll sets of scroll compressors may be needed to extend the application envelope of the compressor,” he said. “Higher discharge temperatures will require liquid injection with a scroll compressor to not damage the scroll sets and ensure safe and efficient operation of the compressor. In certain types of equipment such as ice machines, the higher glide may restrict their use completely and other options that have single components or lower-glide HFO A2L options will need to be qualified.”

Ultimately, changes to commercial refrigeration equipment will be needed in order to be qualified for use with A2L refrigerants and safely deliver the same levels of performance and reliability as their A1 equivalents, said Summers.

“We are making upgrades to our control products to help ensure the technologies are safe to use with mildly flammable refrigerants,” he said. “We have also made and are making upgrades to our electronics, such as our variable-frequency drives, onboard compressor electronics, and components to ensure they are in compliance with safety standards such as UL 60335-2-89.”

As for when commercial refrigeration equipment containing A2Ls will be available on the market, DelVentura believes that will happen by 2024. “We're moving as expediently as we can, but that doesn’t change the fact that companies like ours have a lot of homework to do in the meantime. Even if codes and standards changed tomorrow, we don't have the component base or the supply of refrigerant yet. But things are definitely progressing and we expect to be ready before the regulatory landscape is settled.”

Gangemi also expects A2L refrigerants to most likely start being used in January 2024, which is when the AIM Act steps down the production and consumption of HFC refrigerants by 40%.

“We may start seeing them earlier if the building codes are updated and the EPA SNAP approves them in specific equipment classes,” he said. “A potential barrier could be regulatory requirements in certain equipment classes in certain states that specify GWP limits that are lower than the GWP of the A2L HFC refrigerants. In these cases, they will be limited to R-290 (propane), R-744 (CO2), and R-717 (ammonia) but may be limited even further due to toxicity or charge sizes.”

He added that many of the current HFO blends used today in commercial refrigeration (e.g., R-448A, R-449A) will not be an option, as they are expected to be delisted due to their higher GWP limits in certain equipment classes.

As higher-GWP HFCs are phased out, there will likely be three main options available for use in commercial refrigeration: CO2, propane, and A2Ls. Emerson believes that A2Ls may be adopted more broadly, because unlike propane, they allow higher charge limits and higher capacity, which provides more opportunities, said Butsch.

“Although each of these refrigerants delivers significant GWP reductions, they introduce new performance characteristics, system architectures, and operational characteristics that differ from traditional HFC systems,” she said. “Unlike previous generations of refrigeration technologies, there is less of a one-size-fits-all approach to system design using these lower-GWP refrigerants.”

That said, there has been a lot of research to support the safe use of A2Ls in commercial refrigeration. As a result, safety standards have been developed that require system designs and mitigations that keep refrigerant concentration levels below the lower flammability limit (LFL) in the event of a leak, said Butsch.

“These have enabled the use of lower-GWP options, including A2Ls, in commercial refrigeration and will help end users to lower emissions, better meet sustainability goals, and also meet regulatory compliance,” she said.