From sales to training, VR can take business to the next level

“Have you ever wanted to enter a brand new world, like Lord of the Rings or Game of Thrones? Imagine putting on a headset and walking right inside an air conditioner.”

That’s what Melody Chaney, creative director at The New Flat Rate, has been telling contractors about the experience of virtual reality (VR). From a/c units to ductwork, Chaney said VR gives contractors, technicians, and even customers the ability to see first-hand how an HVAC system works. Not only is this technology useful in regards to illustrating different equipment, but it can also be used for other aspects of an HVAC business, such as menu pricing, she explained.

The New Flat Rate is using virtual reality — through Daikin Comfort Technologies’ virtual training portal — to illustrate menu pricing to HVAC contractors, Chaney said. She added that menu pricing is something relatively new to the industry, so VR can provide a way to visually explain to contractors how they might be “leaving money on the table” when they don’t price their services correctly. 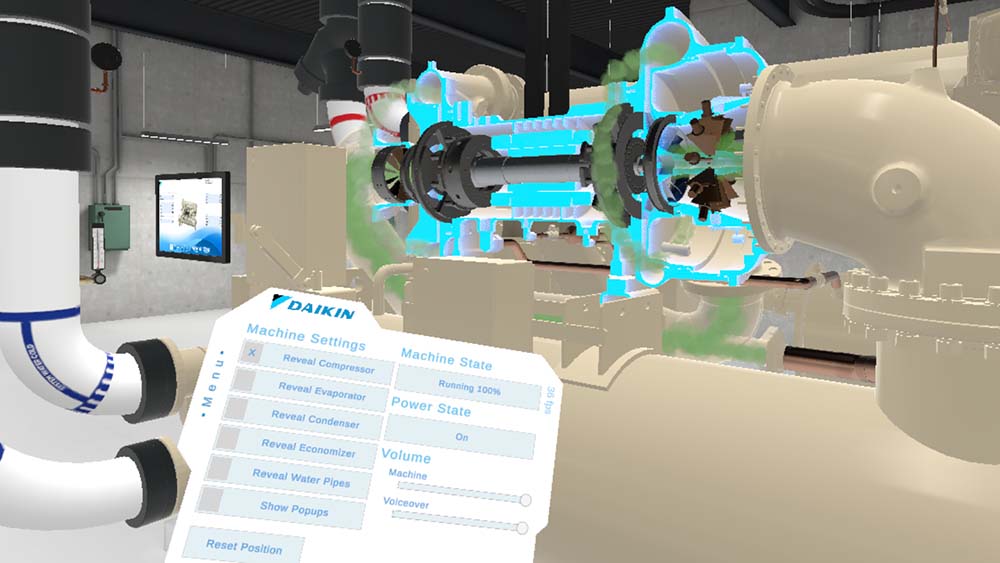 INSIDE LOOK: Through the use of VR, Daikin Applied can provide contractors and technicians with an inside look at all the components found within an HVAC system. (Courtesy of Daikin Applied)

“With that idea of VR, it almost feels like a game to learn, rather than the negative associations people have with classroom-style learning.”
Ariana Dugan
Vice president of product
Interplay Learning

“One of the ideas is to put a furnace maybe in a closet or something and they could use an iPad with our software and a technician could diagnose the problem on the furnace, then be able to pick the correct menu pricing page to show the customer,” Chaney said.

She noted that being able to use a headset and learn, especially during the era of COVID and social distancing, has created a paradigm shift because it provides technicians with little to no experience in HVAC with the chance to practice their skills in “real-life” settings.

Virtual reality can be a powerful retention tool when training. According to Ariana Dugan, vice president of product, Interplay Learning, studies show that businesses experience 90% of recall accuracy when using a VR headset because students and trainees are “doing something with their body,” rather than just reading a textbook. She said businesses who use VR and have allowed their techs to put their knowledge into practice through the use of the technology have seen a positive impact on their technicians’ competence in the field. Using these headsets also attracts a younger generation of talent, Dugan said.

“With that idea of VR, it almost feels like a game to learn, rather than the negative associations people have with classroom-style learning,” she explained. “Even separately from VR, when you have an online training program that is going to help someone build their skills, it gives them the understanding that you want to help them have a career.”

Although COVID initially pushed the idea of virtual learning, Dugan said a lot of schools and businesses saw the added value of using VR and online simulations for post-pandemic learning. She said providing these virtual resources not only saves time for those who used to travel long distances for training, but also helps reduce material costs.

“[When the equipment] is like 15 feet long, 7 feet wide, and 8 feet tall, but weighs 36,000 pounds — how do you exhibit that and get salespeople up to speed on the product itself without having to build a prototype of the equipment and ship it?” she explained.

The company’s goal was to see whether or not sales reps believed they could sell these larger pieces of equipment using VR, and Masica said the answer was “overwhelmingly yes.” She added that although people might assume that the technology would be more appealing to the younger generation, the VR solutions received positive feedback from reps of all ages.

“I think the difference that you see generationally is the speed to understand how to use it,” she noted. “I remember one guy in particular — he's probably over 70 years old — he got in and came out and he goes, ‘It takes us weeks to teach people how the refrigerant cycle works and that taught it in 15 minutes.’”

Although the company had initially used the technology as a sales tool, Masica said VR can be utilized during the training and product design processes as well. She explained that rather than designing with CAD models or Solidworks, engineers can use virtual reality to create new prototypes and test them in a more efficient way.

Despite all the benefits of VR, Masica stressed that the technology does not need to be used for everything. She recommended following the DICE method when trying to decide whether or not to invest in VR for a specific project:

If a project were to fit some — or even all — aspects of the DICE criteria, Masica said VR might be worth considering.

The Future of VR

Given the growing popularity of virtual reality, will contractors be investing more in the technology for years to come? Mark Krewedl, vice president of operations at MacDonald-Miller Facility Solutions, predicted that yes, they will.

The MLAB at MacDonald-Miller is a whole room dedicated to video immersion, said Krewedl. The space contains multiple projectors, along with headsets for the VR component, that help consumers feel like they are actually stepping into a prototype or model, he explained. Krewedl added that while consumers are interacting with the virtual world, team members on the outside can follow along by watching the projected images.

“One of the coolest experiences that we've probably seen with one of our clients that we brought in was a 6-foot-7 service guy. We had modeled the building environment that he currently works in and we showed him our design for the chiller that we brought into that space,” he recalled. “This guy was literally on the ground of our space, crawling around as if he was crawling underneath the other pieces of equipment, sticking his hand down, his wingspan out, fingertip to fingertip, and he's just grinning left and right because he's validating that what he's seen in this three-dimensional world aligns with what it spaces out at his home.”

Krewedl said that the additional validation VR brings into the design effort can reassure a client and make them more likely to go through with a project. He also noted that virtual reality can help illustrate more than one scenario to a client, should there be a need to. This especially comes in handy when the engineer’s design conflicts with the architect’s design, he said, because a redesign will likely be more cost-effective through VR.

While virtual reality will never fully replace 2-D models and other design methods, Krewedl said the technology has “definitely made it easier” to explain design decisions to clients.

“We are getting validation from our clients, they are loving the ability to step into that room, especially at the design phase, to make those harder, challenging decisions about where things are and how high the structure needs to be in order to allow the different systems to run through the space,” he said.