With new delivery service, Winsupply is shooting to become the “Tesla of HVAC Distribution"

On Friday, August 12, Winsupply made history by completing the industry’s first-ever drone delivery. Watch the video above. (Courtesy of Winsupply Inc.)

An HVAC contractor is working on a project when she realizes they’re missing one thermostatic expansion valve. She whips out her phone, types in the part number, and places an order on the Winsupply website.

Fifteen minutes later, a drone buzzes overhead. Plop. A package with the TXV lands at the jobsite, and the drone flies off.

Sound futuristic? That day is coming, and it’s coming fast. On August 12, Winsupply, backed by Drone Express, made history with the industry’s first-ever drone delivery. The drone carried a NIBCO product from the Winsupply Distribution Center in Miamisburg (near Dayton, Ohio) to its branch location in Centerville.

The historic three-mile drone flight marks the beginning of Winsupply consistently delivering a wide range of products weighing under 5 pounds from the Winsupply Distribution Center.

“This is the future,” said John McKenzie, president of Winsupply, at the event marking the inaugural drone delivery. “At Winsupply, we really look for ways to help local companies help their contracting customers, and I can think of no better way to help than to give a contractor more time in his or her day. And that's what this drone delivery is all about: How do we give people more time in their day?”

Currently, the operation is in a six-month proof-of-concept phase. If the return on investment turns out as Winsupply predicts, the drone program will become a legitimate Winsupply delivery option. 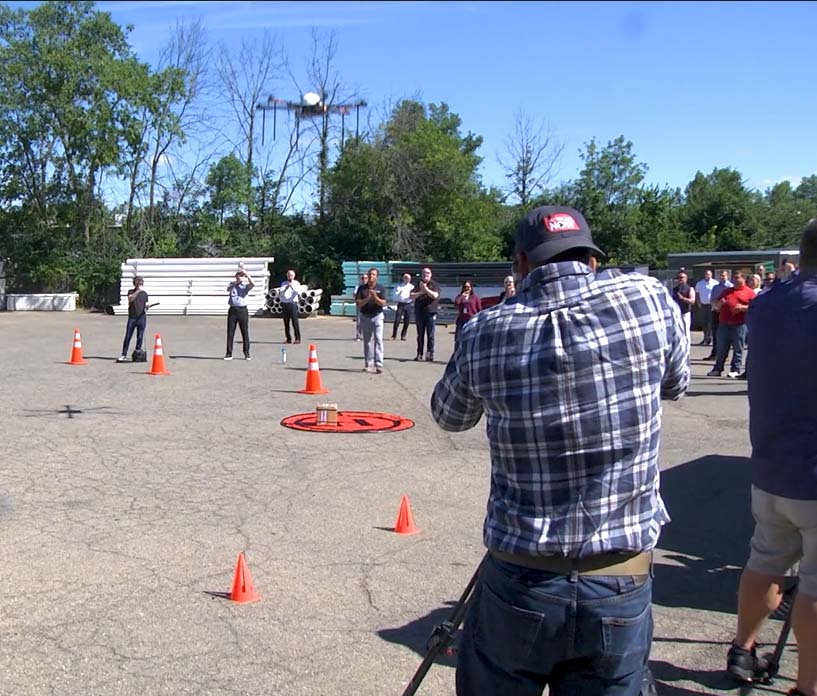 FAA RULES: While the drones can fly autonomously, they currently are required to be manually operated. (Courtesy of Winsupply Inc.)

Under FAA rules, the drones Winsupply is using are allowed to carry 5 pounds, although Turlington said the actual device that Drone Express has a patent on is actually capable of carrying 15-20 pounds. They can fly about 3-5 miles, depending on battery life and payload, and must be manually operated — again, per FAA rules, although the drones are capable of fully autonomous flight. They’re also waterproof and can fly in the rain.

“They can go to a residential address, a commercial address, or it can even follow GPS coordinates to someone's mobile device,” said James Turlington III, IT director for Winsupply. “So this technology really does have the ability already to go direct to a contractor wherever they are.”

Drone Express, headquartered in Dayton, is a logistics firm that uses autonomous drones for efficient local delivery while reducing the impact on the environment. They’ve worked in Ohio on drone-delivered pizza and groceries (the biggest challenge was keeping the ice cream cold); Winsupply is the first step in their expansion into wholesale plumbing/electrical/HVAC delivery.

Even with the 5-pound weight restriction, 10,000 of Winsupply’s items still fall within the acceptable range.

“Which means about 20% of our inventory offering, parsed down to that unit level, could fly on a drone,” said Eric Roush, Winsupply’s vice president of supply chain. “It's a pretty significant, pretty high amount of items.

“We can't haul air conditioners; we can't haul furnaces. But what we can do is we can haul parts and accessories for those things, and tools,” he explained. Instead of a 30-minute round trip from a jobsite, plus time spent ordering at the counter and waiting for the item to be brought out, the contractor can remain on the jobsite and Winsupply can complete a flight of that range in five minutes.

“The value proposition of this drone delivery is, we're saving them time and money … so they're not having to trek back to the distribution center, and can save time, money, gas,” Turlington concluded.

“Just imagine, a contractor is missing a single item to complete a job,” said McKenzie at the inaugural drone flight. “Instead of a delay of days or weeks, that product appears out of the sky in a matter of minutes. That’s the direction Winsupply is going.”

“You either are using the technology to better serve your customers, or you're not.”
James Turlington III
IT director, Winsupply

The ‘Tesla of HVAC Distribution’

Drone delivery isn’t just a win for contractors, Turlington said. It’s also a competitive advantage for distributors. Even though Winsupply is the first distributor to use it, he said, as people start seeing more drones in the sky from other industries — from groceries to restaurants and everything else — it's going to be “inevitable.”

“You either are using the technology to better serve your customers, or you're not,” he said.

And don’t discount the ‘cool’ factor.

“Look at Tesla,” Turlington said. “When they first came out, there were a lot of skeptics, a lot of naysayers … ‘Man, that battery can’t take you more than 50 miles, there's not a lot of electrical charging substations out there, so why would I ever do that?’ Now you see electric Teslas all over the place. And you see a lot of other car manufacturers trying to catch up. … What we'd like to do from this is be the Tesla of wholesale distribution for plumbing and HVAC. We're on the cutting edge and doing it, and then as the battery life increases, as the FSA/FAA guidelines loosen or evolve, everyone else will be scrambling to keep up with us.”

Looking ahead, Winsupply’s strategy (aside from becoming the next Elon Musk) is to open micro-distribution centers in metro areas.

Even though the drone delivery program is still in its testing phase, contractors are already stoked for the rollout, Turlington said.

“I think that excitement is strong enough to where they're like, ‘How soon can I start using this?’ So it's definitely causing a lot of intrigue,” he said. “It is amazing the amount of excitement it does drive.”