In his early 20s, Scott Merritt had basically ruined his life with drugs and alcohol. He lost his job, his house, his car, his fiancée, and found himself virtually homeless. He spent the nights sleeping under his brother’s work bench. Merritt would have to wake up and leave each day before anybody showed up for work. Until one morning — after a night where Merritt had a long meeting with his maker — something changed.

Merritt took his morning walk just as he normally did. On this walk, he walked past a window in a shopping center and noticed a sign that read, “Classes starting Monday.” It was Friday. He walked right in and said he wanted to start classes that Monday. They gave him the option of medical assistant or heating and cooling. He chose heating and cooling.

“I kind of believe that God guided me to that because I was definitely at the low point of my life,” said Merritt, who would later become the founder and CEO of Fire & Ice Heating and Air Conditioning Inc. “I had an epiphany and a moment of realization that my path was the wrong path. So I decided that it was time to change everything.”

Merritt spent 10 years planning Fire & Ice. And after exactly 10 years (and one day) of planning, it opened. 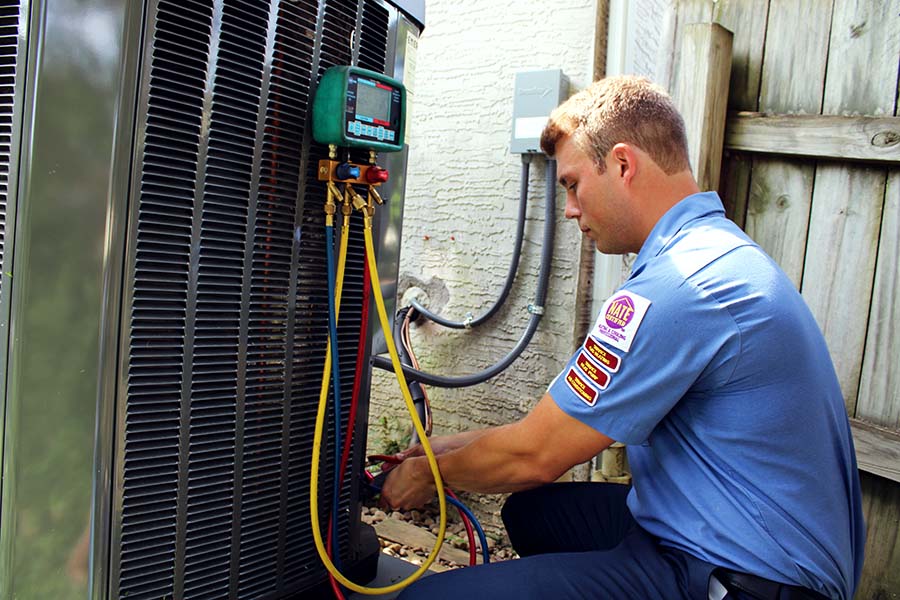 GAUGE IT: Nick Duffy ensuring all is well. (Courtesy of Fire & Ice)

Once Fire & Ice opened, he emailed just about every single person he’d ever met that he had an email for. He told them he’d give good deals and he’d take care of them. He printed out flyers at home and faxed them to every fax number he could find in the phonebook. He went “door to door, door to door, door to door.” Business started to trickle in.

Fifty-five employees, plus their families, equates to about 130 people, Merritt figures.

“So I am responsible for feeding 130 people every week. I take that responsibility very seriously.”

Companywide growth has stayed constant, even during some of the nation’s hardest economic times. Merritt thinks ahead. He more or less plans for the worst case scenario: how to bring business in when there’s no business.

Some of the company’s growth can be attributed to its marketing efforts and how they’ve embraced technology. In Merritt’s words, it can be pretty aggressive. 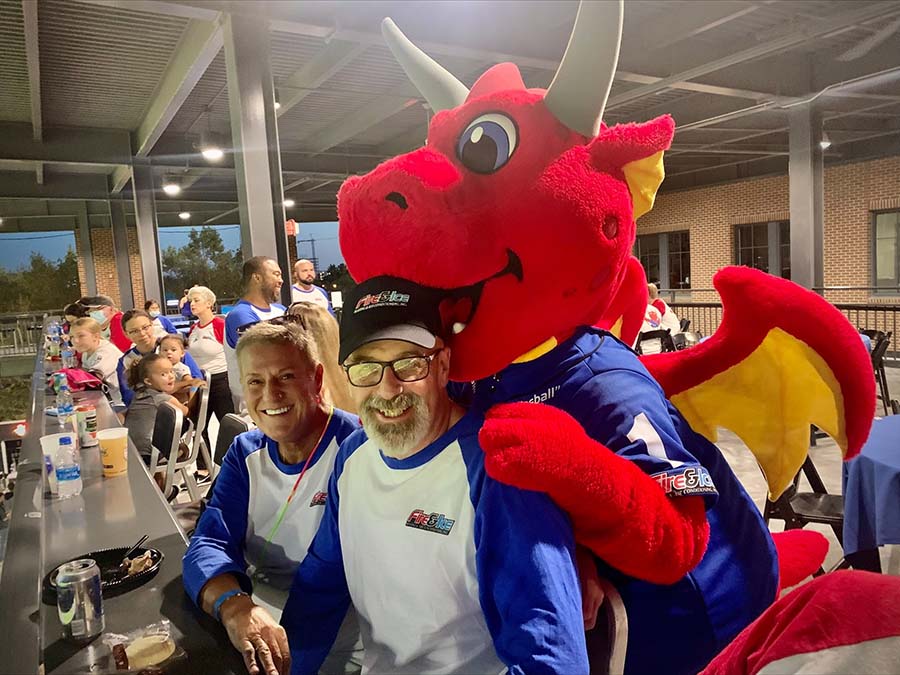 COMPANY FUN: Guy Smith and Fireball with a colleague. (Courtesy of Fire & Ice)

But in today’s day and age, that’s the way the game has to be played. And Merritt knows heating and cooling is not sexy. That’s why the company’s mascot is Fireball.

“I like seeing the company grow. I’ve seen this company go through so many stages,” said Cynthia Hutson, communications director and acting general manager. “We’re pretty well-known in different arenas around the country just by marketing pieces we put out.”

Fire & Ice has a good reputation for getting the job done and getting it done fast. Everything they do is a one-day job. It’s a promise they make, and Fire & Ice makes good on its promises.

“What we do here is we build the foundation, and we don't build the next level on top of that until we know that foundation is super strong. And then we build another super strong level. We don't rush into things. We build everything to last a century,” Merritt said.

“I know it sounds cliché, but we are a fair and honest company. We stand by what we are, who we are, what we market, almost to a fault.”
- Cynthia Hutson
Communications director and acting general manager, Fire & Ice Heating & Air Conditioning

Before Fire & Ice, Merritt was unhappy with how mistreated customers were “when it comes to literally just taking advantage.” So he wanted to set a different standard for the company.

Fire & Ice is built on being the most trusted source of HVAC and IAQ in Ohio — and the customer’s trust actually matters. Earning trust takes time. A way the company builds customer trust is that its mission and value statements aren’t kept a secret. They are an open book.

They do this by spending time with their customers. Technicians go through a full 87-point commissioning checklist to ensure the unit is charged perfectly after installation. The company also pays by the hour so technicians can’t just run out after installing a unit. Customers are always in-the-know.

Merritt also cultivates this culture within the office by having a strict open-door policy.

Hutson has been with the company for 11.5 years. She attributes her love for her job to working with Merritt.

“I know it sounds cliché, but we are a fair and honest company,” she said. “We stand by what we are, who we are, what we market, almost to a fault.”

At the end of the day, that’s very clearly what Fire & Ice is all about.

“I know that are customers are taken better care of than any other customers around town,” said Jerad Kingery, service manager at Fire & Ice.

The Future of HVAC

Looking ahead, Merritt works to cultivate young talent that will be there serving the HVAC industry long after he’s gone. The company does this partly through serving on the board of Columbus State Community College, Columbus City Schools, and Fortis College.

“Which is absolutely necessary given the market. We have to make sure that we are very, very well-trained and very-well structured.”

Kids may come to your company out of HVAC training or vocational high school, but you have to build them from there, Merritt said.

As for the industry, technology isn’t going away. Running a business is fluid, Merritt said. Companies have to adapt to the changes.

“God's blessed me. God’s blessed my company,” he continued. “I try to do what I can to give back to the community. And my team is the same way. So not everything is about what we get. If we get a good feeling inside, sometimes we don't need dollars to transact in order for us to run a good company.”

Not Your Average HVAC Application