This year, the focus centered on the theme, “This Time, It's Personal.” Summit was open to the entire HVAC Industry, with the intent of shining a spotlight on likeminded people willing to share their high-performance experiences with peers.

This all-new approach allowed conference attendees to personalize their experience based on their knowledge and comfort level with each topic. In that light, each topic offered three options:

Excitement radiated even during the pre-conference boot camp conducted by Goodman Air Conditioning and Heating and during the two recertification classes held by NCI on March 28. Then, it was three days of seminars, networking, and social events, followed by the yearly awards dinner and banquet.

Attendees learned how to install test ports, where to perform measurements, and much more during the Performance Town workshops.

The Opening General Session kicked off Tuesday morning, March 29. All attendees were treated to a rousing multimedia introduction, followed by an interactive game show called, "Reach for the Summit." All general sessions took place in the same room with the preferred partner trade show.

The game show began with selecting two random contractors from the audience to answer multiple-choice questions from real-world installation and service scenarios. The audience then had the opportunity to vote via the National Comfort Institute (NCI) Summit 2022 mobile app for the answer they thought was correct. The contractors earned points for correct answers, with the winner taking home a new NSI 6000 Low-Level CO Monitor.

Each question was followed up with commentary by David Holt and David Richardson, who discussed the merits of each answer and which way they felt the audience would vote. The winner was Dawn Mroczek of GV's Heating and Air Conditioning. Coming in second place was Will Horner of Canco ClimateCare. He received an Amazon gift card.

After the morning breakout workshops, contractors reconvened for the popular contractors-only Idea Meeting, hosted by Michael Greany of Aire Rite Air Conditioning and Refrigeration and Mike Weil of NCI. This meeting was divided into two 45-minute sessions: one dedicated to high-performance lead generation, the other one to sales.

Attendees presented their ideas on each topic and then voted for those they felt were the best. The winning ideas were from:

Eighteen exhibitors managed their table-top displays all around the general session ballroom, so contractors had the opportunity to talk with them during breaks and regularly scheduled tradeshow hours. Exhibitors also participated in NCI's annual Preferred Partner Prize Drawing. Attendees received "game cards" that had to be stickered by each exhibitor, then turned in to be eligible for the drawing.

State of the High-Performance HVAC Industry 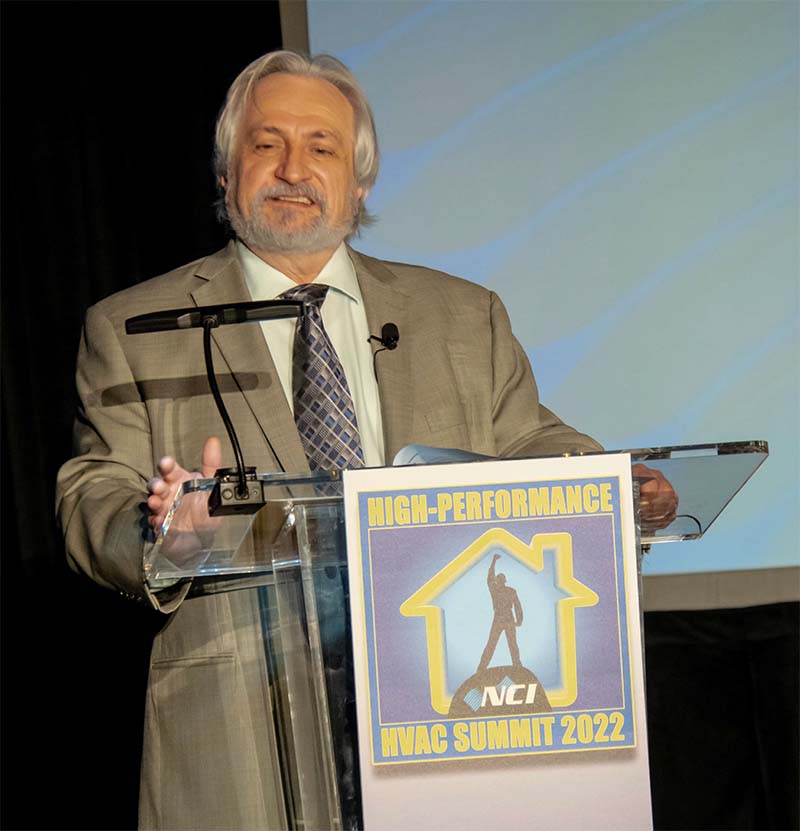 Thursday morning, March 31, the morning general session was headlined by NCI CEO Dominick Guarino, who discussed the state of the high-performance HVAC industry and NCI's role in it.

“The high-performance industry is growing. The term high-performance contractor is being used more and more within our industry — by other organizations, manufacturers, distributors, utilities, and even government agencies,” said Guarino. “Delivered performance is increasingly on the lips of many in the HVAC industry, as they see it as the next sea change that can make systems work better and save energy more than anything else we can do. Homeowners are increasingly seeking out companies that can help them solve long-standing performance issues.”

Mark your calendars for April 16-20, 2023. That is when Summit 2023 happens. The high-performance HVAC industry will descend upon the Ozark mountains at the Chateau on the Lake in Branson, Missouri.