Contractors in attendance got a sneak preview at several products, including a commercial fan assembly

Regal Rexnord’s booth at the AHR Expo had a clear theme: energy efficiency.

“We're used to thinking of motors as being dumb animals — you feed them electricity and they spin, but every one of ours does something unique and different to help improve customer comfort, improve the efficiency that OEMs are able to bring to market, which helps comply with regulations,” said Arlene Campbell, vice president of sales. “Everybody's talking about sustainability. It really, really matters, and it's one of our core values. So not only do we run our company with an eye to it, but we're also very intentional about the products we bring to market and the components that we're using in our products; we want to make sure that there's enhanced opportunity for recyclability.”

Regal’s newest product is a poster child for those ideals. It’s a fan assembly for commercial applications, and Expo attendees were able to get a sneak preview before its official launch. 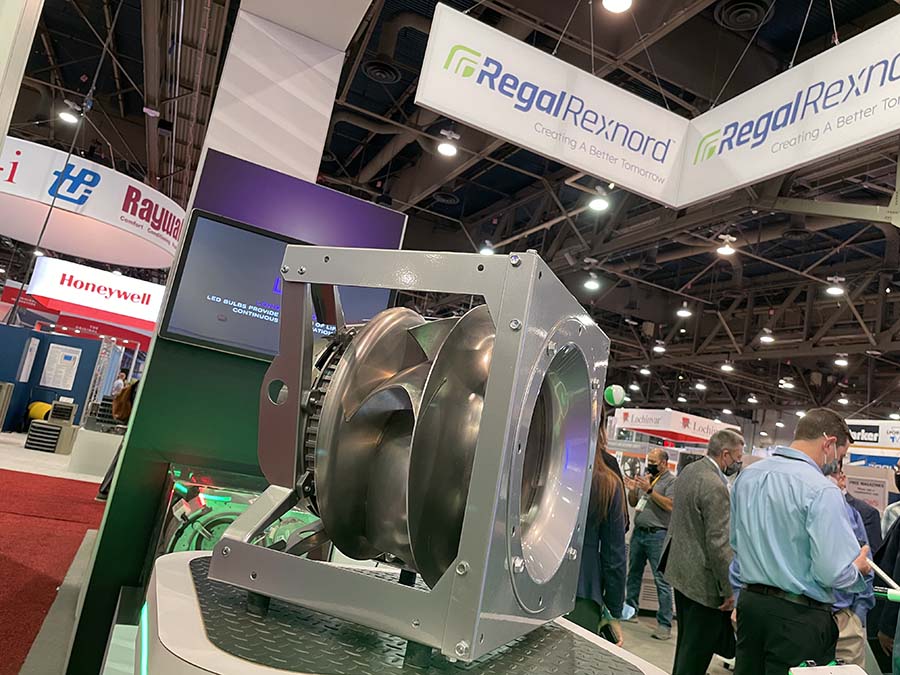 PRODUCT PREVIEW: Contractors at the AHR Expo got a glimpse at Regal Rexnord’s new fan assembly. According to the company, some customers who tested it realized a 20% energy savings. (Staff photo)

“This is going to be the highest efficiency at the shortest axial length for an air moving system in the market today,” said Tim Thorson, commercial HVAC sales leader - North America at Regal. “What that does is allows an OEM to make their rooftop or their air handlers smaller and save them substantial money on sheet metal and other components that are in the system. Normally, this would be with an external rotor motor, which has a large hub that fits inside where the airflow goes through. But look at the other side here — there's no hub here, so you get completely unobstructed airflow. That's how we're able to get the high efficiency at such a short axial length.”

Some customers who tested the new fan assembly realized a 20% energy saving. The product uses an aluminum wheel so that it’s more recyclable while still being able to drive those larger efficiencies.

Once the product hits the market, Campbell said, lead times will be “extremely competitive” — a big advantage in a market where lead time can be up to 72 weeks.

Right next to it at the booth was another new product line currently in manufacturing, to be launched this fall: the Symax Pro EC series motors, designed for commercial HVAC outdoor air moving applications.

“There's a big drive towards fitting those units with EC motors, especially when you're looking at some of the data center spaces getting federal money today. We’re going after EC motor retrofits, so it’s going to be perfect for that.”

IAQ is another space where retrofits are a focus for Regal Rexnord.

“Over the past couple years, we've been looking at how to do air quality in a smart, easy, out-of-sight/out-of-mind way,” said Audie Cash, vice president - general manager at Regal Rexnord.

That led to the UVantage UV LED air treatment products. The first version is made for new equipment designs. It’s integrated within the blower housing and only operates when the blowers are moving, making it efficient and long-lasting. The second version, called UVantage Plus, mounts inside the duct and is meant for retrofit applications such as homes, commercial spaces, and schools. It sterilizes the airstream as the air flows by the unit.

“What’s unique about is this is that it knows when it's properly installed,” he said. “There's a little sensor here to tell you that it's properly installed, so the installer or the maintenance technician is never exposed to UV. You have to have a combination of proper installation and air movement to turn on the UV-C LEDs, and that keeps people safe.”

Other new products on display included Regal’s Hilo motor for commercial refrigeration; their new Fronteer hybrid variable-speed drive, which gives up to +5 SEER rating for homeowners; their Acclimate line of gas premix blowers, focused on efficiency; and their Fortifi system, a complete ecosystem of motors, sensors, hardware, and software designed to monitor and control the components that keep refrigeration equipment running. 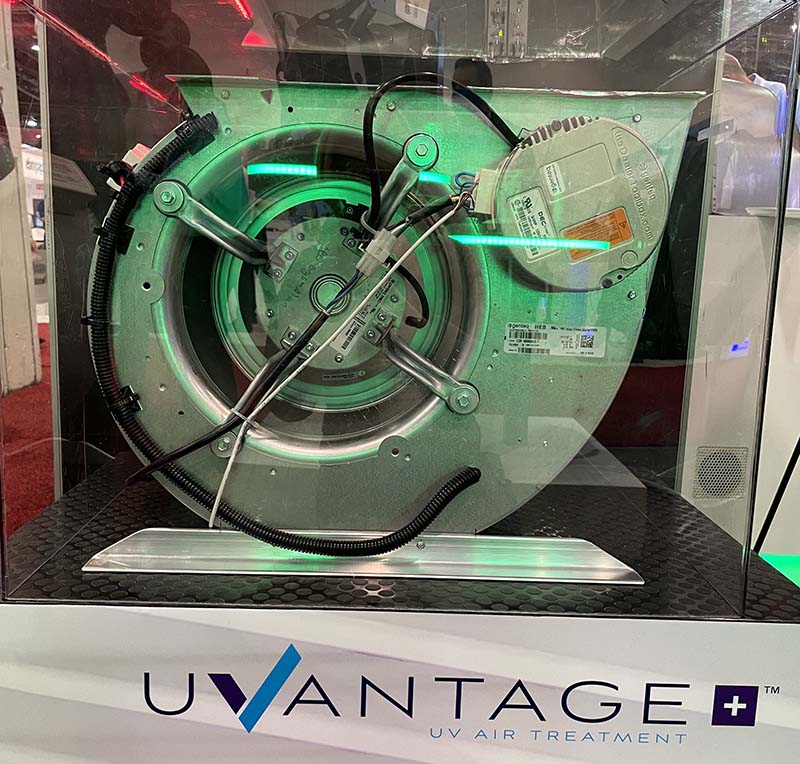 To demonstrate Fortifi’s capabilities, the booth had a display of a commercial refrigeration case with some of Regal’s blowers inside, connected with sensors and sensing technology called Perceptiv, which is used throughout Regal Rexnord.

“It allows a two-way conversation with the motors that are in the refrigeration case, so you can slow them down if that's going to help you save energy, or you can monitor that they're running properly,” said Xiaohui Ji, product manager. “What tends to go wrong in a refrigeration case is that the temperature starts to rise — and then it's too late, you've already got a big block of ice that's in there that you have to defrost to fix the problem. With fortify, we’re able to identify problems before you knew that it was there, and perhaps able to solve the problem in 15 minutes instead of it taking several hours. So it can improve food safety, but it's really an efficiency standpoint from maintenance and energy usage.”